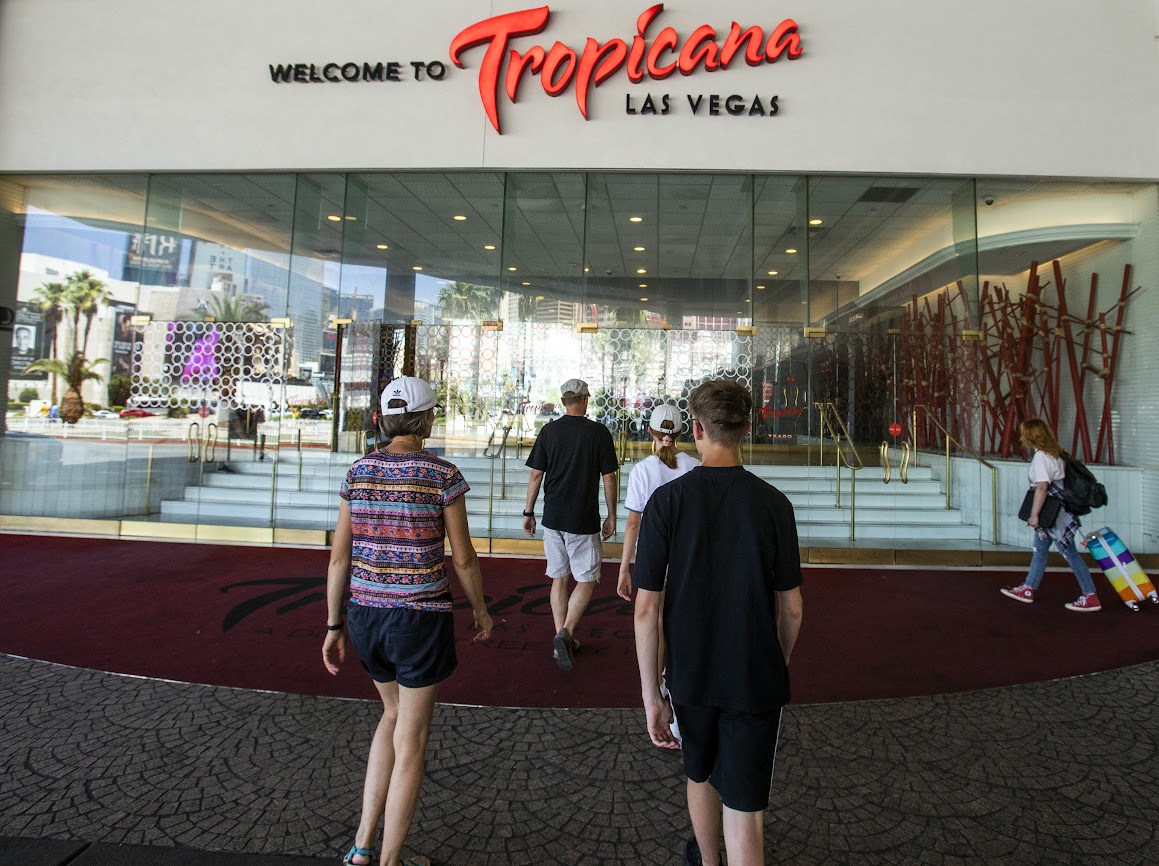 More than a year after announcing a deal to acquire the Tropicana Las Vegas, Bally’s Corp. said it will close the $308 million transaction at the end of September.

However, executives from the Rhode Island-based company said last week it will be well into 2023 before any redevelopment takes place on the 34-acre south-Strip location.

That schedule may not fit in the timeline of the Oakland A’s. The Major League Baseball team has reportedly targeted the Tropicana location as a site for a $1 billion, 35,000-seat stadium should the A’s choose to relocate to Las Vegas.

“I think it's well-advertised that we intend to develop (the site) at some point in the future,” Bally’s CEO Lee Fenton said in the company’s second-quarter earnings conference call last week. “But we will run the property on an as-is basis at least for the next 12 months until we have identified the plan and the partnerships that we want going forward.”

A’s executives have said they would like to have a decision on a new home this year. The team wants to build a $1 billion waterfront ballpark in Oakland to replace the 57-year-old RingCentral Coliseum. The proposed stadium is the centerpiece of a projected $12 billion mixed-use development at the Port of Oakland’s Howard Terminal.

However, numerous approvals from Bay Area elected leaders are still required, and the team is on “parallel paths” toward landing a new ballpark in Oakland or moving to Las Vegas. The Tropicana is one of two sites in the resort corridor the team is exploring for a ballpark. Reportedly, a 27-acre parcel owned by VICI Properties along Koval Lane behind Planet Hollywood and Paris Las Vegas is also under consideration.

Bally’s first announced the acquisition of the Tropicana in April 2021 as part of the $308 million deal with real estate investment trust Gaming and Leisure Properties, which owns the site. Bally’s said it would pay GLPI $10.5 million annually to lease the site under a 50-year rental that is subject to increases.

GLPI General Counsel Brandon Moore said a week earlier the company was aware Bally’s is looking at redeveloping the Tropicana site and “obviously (has) a strong interest in the ultimate plans.”

Bally’s purchase of the nearly 1,500-room Rat Pack-era property still needs approval by Nevada gaming regulators. The matter is currently not scheduled to be heard on this month’s agenda.

It is thought that the company would rename the resort under the Bally’s brand, as it has done with 13 of its 14 casinos, including its Evansville, Indiana, property that was formerly known as Tropicana Evansville.

Bally’s CFO Bobby Lavan said the Tropicana Las Vegas would initially produce $6 million in quarterly cash flow once the company takes over operations. Penn Entertainment has owned the Tropicana since 2015 but sold the real estate and resort facility to GLPI in March 2020 during the pandemic.

Analysts didn’t have much commentary on the Tropicana deal, directing attention toward Bally’s interactive gaming division and the company’s planned casino in Chicago.

Bally’s said it would spend $70 million to open a temporary casino by next June while constructing the $1.7 billion permanent hotel-casino at the former Chicago Tribune site downtown along the Chicago River. The resort is expected to open in 2026.

Golden Entertainment is maintaining its gaming license for the Colorado Belle Casino Hotel in Laughlin that has been closed for 29 months, but the company is evaluating plans for the riverboat-themed property.

Las Vegas-based Golden currently operates two casino-hotels in the Colorado River gaming community, the 1,900-room Aquarius and the 1,052-room Edgewater. The nearly 1,200-room Colorado Belle is adjacent to the Edgewater.

"That is a one-of-a-kind piece of property on the riverfront and has a multitude of potential uses,” Golden CEO Blake Sartini said last week on the company’s second-quarter earnings conference call. “I won't get into what we've explored.”

The Colorado Belle is the largest of the five casino hotels in Southern Nevada that have not reopened since the pandemic caused a 78-day shutdown of gaming in 2020.

Last month, Red Rock Resorts said it would demolish its three closed properties — Fiesta Rancho and Texas Station in North Las Vegas and Fiesta Henderson — and then clear the sites and sell the land without the gaming entitlements.

Boyd Gaming has no plans to reopen, nor demolish, its Eastside Cannery property on the Boulder Highway. The company said customer demand in the market is not strong enough to handle another casino. Boyd also operates Sam’s Town in close proximity to the Cannery.

Sartini made similar comments about Golden’s presence in the Laughlin market.

“I think the capacity that we currently have with the rooms and the casino inventory is sufficient for what we see going forward down there,” Sartini said. “That market at some point could use a significant traffic driver."

Laughlin, which was one of two markets in the state that didn’t set a gaming revenue record in 2021, has more than 8,600 hotel rooms. The community 90 miles from Las Vegas and across the Colorado River from Bullhead City, Arizona, has seen 624,500 visitors through June, according to the Las Vegas Convention and Visitors Authority, a less than 1 percent decline from 2021.

Golden operates the Laughlin Events Center, which has an active performance schedule.

Without Colorado Belle, Golden and Caesars Entertainment are essentially tied as Laughlin’s largest casino operators. Caesars has the 1,500-room Harrah’s Laughlin and the 1,450-room Tropicana Laughlin.

Even as Colorado Belle remains idled, Golden is looking at acquisition opportunities, including slot machine routes in markets outside of Nevada where it is the largest operator of gaming in taverns, bars and other third-party locations.

“Buy-side mergers and acquisition opportunities would be more of a (casino) recycling effort, in which Golden would be likely to dispose of a non-core (casino) or (casinos), prior to an acquisition,” he wrote in a research note following the conference call.

Via The Associated Press

Hard Rock Atlantic City President Joe Lupo is headed to Las Vegas later this year to run The Mirage once Hard Rock Entertainment takes ownership of the Strip resort. The company is buying the property for roughly $1.1 billion. Lupo worked in Southern Nevada for several Boyd Gaming properties, including the former Stardust. He went to Atlantic City when Boyd owned the Borgata.

“The last four years in Atlantic City have been such a rewarding experience for me. I feel humbled and excited to be appointed as the new president of the Hard Rock Hotel & Casino Las Vegas project, and to return home to my family.”

Via The Nevada Independent

Operators of the Sapphire gentleman’s club are seeking Clark County approval for a dozen bar-top slot machines, which would violate ordinances against having gaming in an adult nightclub and topless lounge. Gaming industry leaders are supportive because Sapphires is across from entrances to Resorts World Las Vegas and next to Thrive Cannabis Marketplace, a dispensary that has applied for a marijuana consumption license.

“I would suggest that this is premature to consider adding another entitlement in this location until you know how the previously approved entitlements are going to perform.”

As part of its second-quarter earnings release, Penn National Gaming said it is renaming the company Penn Entertainment, which reflects its multifaceted operations, including 44 casinos in 20 states, sports betting and online casino gaming. In Nevada, Penn operates M Resort, two casinos in Jackpot and is selling the Tropicana Las Vegas.

“We think about it all the time. It would be foolish to think otherwise. And you can't buy what's not for sale. We remain keenly focused on BetMGM. We'd like more of it. … We continue to follow the math and we understand it intimately. But for now we have no story there.”