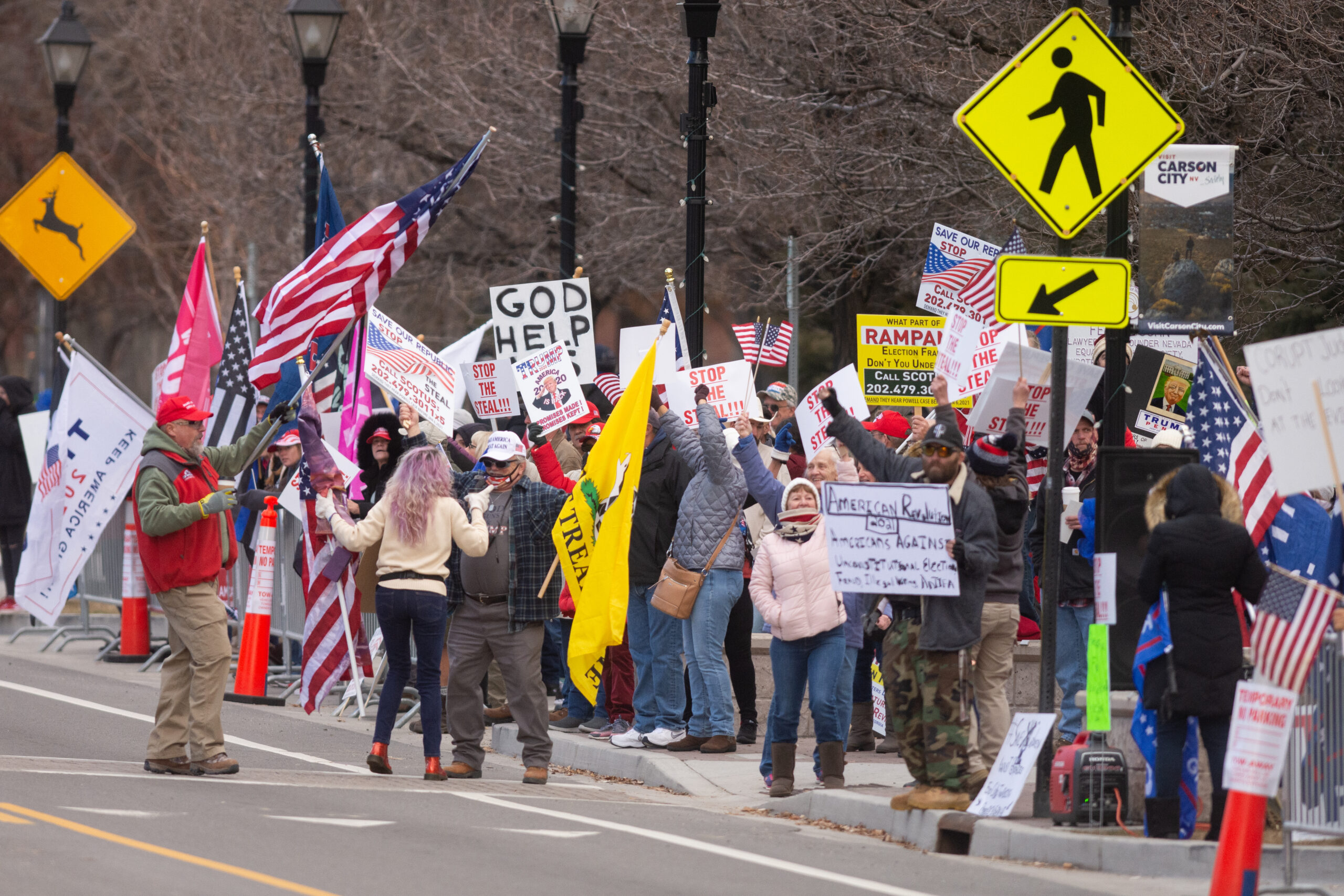 Editor’s Note: This is part of ongoing coverage made possible through a partnership between KUNR Public Radio and The Nevada Independent focused on the influence of the baseless claim that the 2020 presidential election was rigged by massive voter fraud, popularly referred to as the “Big Lie.”

Nearly 1,000 Nevadans — including two candidates for public office, one sitting county commissioner, four law enforcement professionals and two military members — have paid membership fees to the extremist militia group the Oath Keepers, one of the many far-right groups that planned the Jan. 6 attack on the U.S. Capitol.

The revelation came as part of a recent report published by the Anti-Defamation League’s (ADL) Center on Extremism, which analyzed more than 38,000 names in a massive database of documents linked to the Oath Keepers. The database, leaked by the nonprofit journalist collective Distributed Denial of Secrets last year, features membership information, online chat-room records and emails from the group in 2020 and 2021.

The ADL did not offer names of rank-and-file law enforcement or military personnel. However, the group provided journalists with the names of elected officials and candidates running for public office.

Alex Friedfeld, an investigative researcher with the ADL, said the lists are far from comprehensive; inclusion in the database only indicates that a person paid membership dues to the Oath Keepers in the past.

“The fact that these people at one point in time signed up for an extremist organization like the Oath Keepers raises serious doubts about their ability to protect and care for everyone within their community,” Friedfeld said.

He explained the Oath Keepers believe the federal government has been co-opted by a shadowy conspiracy bent on enslaving the American people. They try to recruit new members in positions of authority, so they can block laws they deem unconstitutional.

“What, to them, represents constitutional or unconstitutional is warped by conspiracy,” he said. “And actually is not grounded in any legal basis, usually just representing things that they dislike.”

Like other militias, the Oath Keepers are also motivated by the insurrectionist theory of gun ownership. That idea stems from a belief that “unrestricted access to guns of every kind is an essential element of political freedom,” according to the book Guns, Democracy and the Insurrectionist Idea by Joshua Horwitz and Casey Anderson.

“Insurrectionists see the government as the enemy and condemn any and all gun regulation as a government plot to monitor gun ownership (and presumably to lay the groundwork for confiscation in the event of a political crisis),” they wrote.

Those beliefs have led Oath Keepers to be present at many high-profile incidents of political violence in recent years – including armed standoffs between federal agents and members of the anti-government Bundy family, as well as the Jan. 6 insurrection. In 2017, they stood shoulder to shoulder with white nationalists during violent clashes in Berkeley, California, and Charlottesville, Virginia.

Friedfeld added that while the report helps frame the scope of the group’s connections to power, it’s up to communities and local leaders to take the next step and use the information “to better equip themselves in the fight against extremism.”

“Our hope is that people will look at these findings and will dig further,” he said.

Cox did not respond to emailed requests for comment sent Monday. But in documents reviewed by the ADL, she implied that she could help recruit for the organization, noting, “Trainer I could spread message / application as I travel to teach outdoor ethics [sic].”

Vaughan denied being a member but said he was invited to give the eulogy at a funeral where Oath Keepers were providing security. The funeral was for Lavoy Finicum, who was killed during an armed standoff with federal agents at the Malheur Wildlife Refuge in 2016 and is revered as a martyr by Oath Keepers and the broader anti-government movement.

ADL researchers confirmed that Vaughan donated to the organization.

In an interview, Bridges said he paid membership dues in the past but has lost contact with the group. He described it as an “education organization,” adding that he does not know why anyone who has taken the oath of office would deny belonging to it.

“I would support their ideals. I may not support every action, just like, we support certain people in office, but there's a lot of things they do that we don't like,” Bridges said. “But fundamentally, the organization that I was a part of was a very good organization.”

Bridges also said he went to the armed confrontation between Nevada rancher Cliven Bundy and law enforcement in 2014, noting, “I went out and spent the night out there … And I support the man.”

The conflict began when federal agents tried seizing Bundy’s cattle because he had refused to pay more than a million dollars in withheld grazing fees. Although he’d been running his herds on public land for years, Bundy framed the issue as government overreach and attracted hundreds of heavily armed, anti-government extremists to his cause.

Another Nevadan running for office with a link to the Oath Keepers is Cherlyn Arrington. Arrington’s name did not turn up in the ADL report, but in a 2018 candidate interview with the controversial Veterans in Politics organization, she claimed she was a founding member of the extremist militia group.

Arrington is running for state Senate in Southern Nevada’s Republican-leaning District 12. This marks her third bid for elected office, and she holds the endorsement of the Senate Republican caucus. Her Democratic opponent is hospitality professional Julie Pazina.

Though there is no concrete way to verify Arrington’s claims, Friedfeld called her statement “disturbing.”

“By 2018, the Oath Keepers had already been linked to a wide range of criminal activity, including notably standing off against federal agents at Bundy ranch during an armed standoff in 2014,” he said. “So the fact that she took pride in this and is trying to claim that she was a founding member is deeply alarming.”

Arrington did not follow up on repeated interview requests via phone calls, texts or email.

Elmer Stewart Rhodes founded the Oath Keepers in 2009. Though Rhodes has connections to Nevada and graduated from UNLV in 1998, Arrington has not been publicly linked with the group’s leadership.

Rhodes and four others face seditious conspiracy charges for their roles in the Jan. 6 insurrection. Their trial is set to take place later this month.

Along with Arrington’s connection to the Oath Keepers, an investigation by KUNR and The Nevada Independent revealed that she is one of nearly a dozen legislative candidates in Nevada’s general election who have repeated false allegations that widespread voter fraud marred the 2020 election.

Recent reporting from PBS indicates that nearly 1 in 3 Republican candidates for statewide office across the country support false election claims. Experts warn the narrative of the stolen election is connected to fringe movements that could further erode democracy and lead to political violence.

Friedfeld cautioned that any time someone with an extremist ideology runs for office, it creates an opportunity for that candidate to marry their extremist ideologies with power. He is also worried about the broader membership of the Oath Keepers.

“It’s important to remember that thousands and thousands of people signed up for the group that not only are seemingly ordinary Americans, they weren’t even working in fields specifically targeted by the Oath Keepers,” he said. “What that says to me is it speaks to how successful the Oath Keepers have been in making their anti-government extremist ideology palatable to wider audiences.”