There are 23 marijuana bills this session. What's in them? 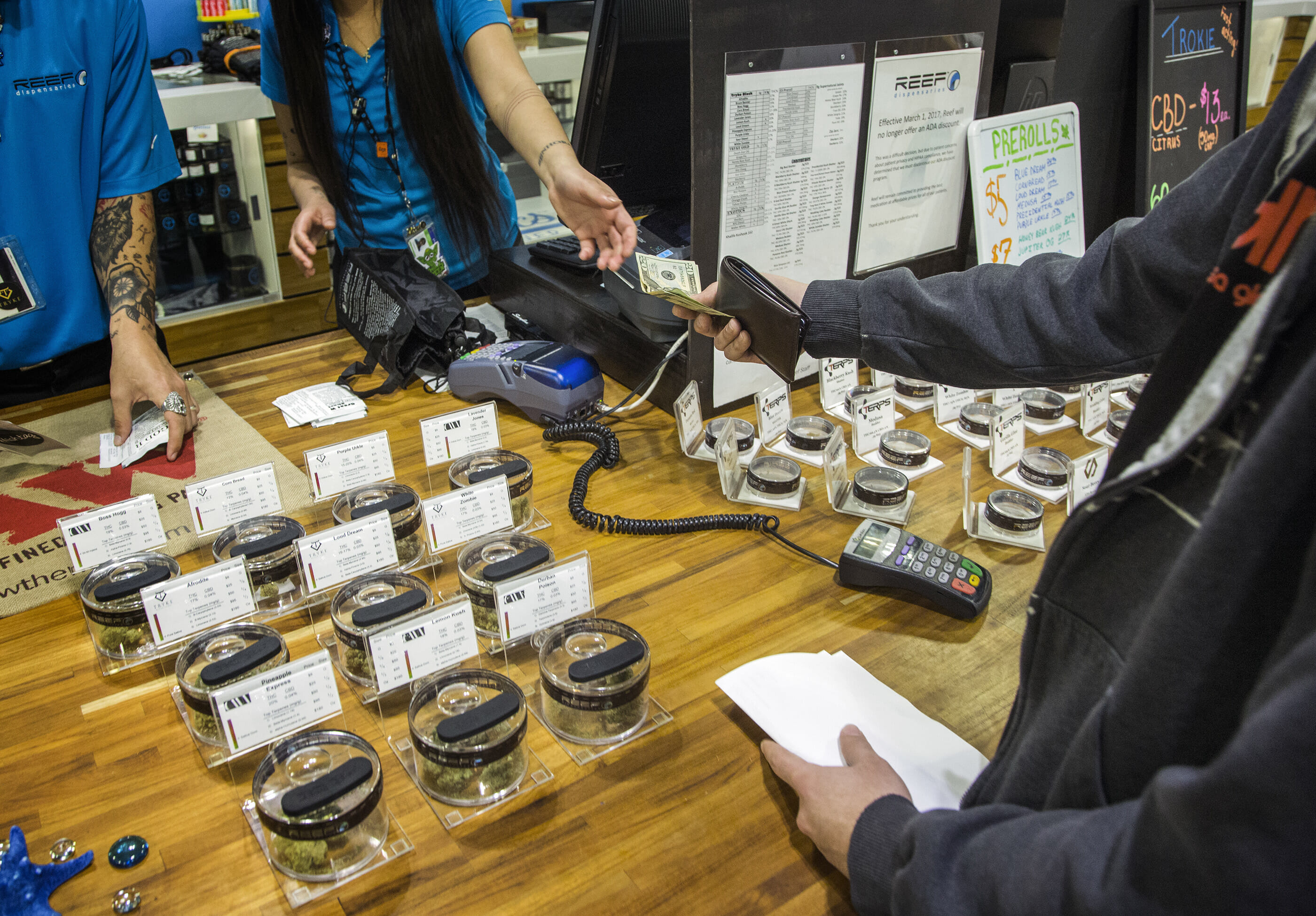 After voters authorized recreational marijuana in November, Nevada lawmakers are discussing a raft of legislation to fill in the details of the new environment.

Here are some key themes running through 23 marijuana-related bills this session, and how they overlap with one another:

And here are summaries of the bills and their status in the legislative process:

AB135: Driving under the influence of pot (Assembly Judiciary Committee)

The bill requires each edible marijuana produce to be labeled with the amount of Tetrahydrocannabinol (THC), the active ingredient, that it contains. It also limits the amount of THC contained in any single package. It prohibits edible marijuana products that look like candy or may appeal to children. Producers of marijuana-infused cookies and brownies must seal those products in a bag or container that’s opaque. Marijuana businesses are also barred from using advertisements that appeal to children.

The bill requires the Nevada Department of Education to survey students in middle, junior and high schools about use and abuse of alcohol and drugs. It requires the department to choose schools where the survey will be administered and submit an annual report that summarizes the data collected in the previous year.

Existing law requires any donations to the state to administer marijuana programs to be first used for the program, then to provide alcohol and  drug abuse programs. The bill would require the excess money to be distributed as a block grant to agencies that provide child welfare services, so they can provide substance abuse and behavioral health programs.

This bill creates an Account for the Treatment of Substance Abusers that would support treatment for offenders within the Nevada Department of Corrections. It would raise taxes on liquor and bump up the per-pack cigarette tax from $1.80 to $2.40 to fund the account. Each year, the state would pay $65 million from the account to treat offenders and $10 million a year to provide a heroin-assisted treatment pilot program.

The bill also requires the court to vacate the conviction if it involved possessing 1 ounce or less of marijuana.

Additionally, it allows the court to depart from mandatory minimum sentences for possession of a controlled substance in certain cases.

The bill allows a court to vacate a conviction for an act involving marijuana that is lawful as of Jan. 1, 2017, as long as the court notifies the attorney who prosecuted the original case and that attorney can present evidence to the court deciding whether to vacate the conviction.

The bill also requires the court to vacate the conviction if it involved possessing 1 ounce or less of marijuana.

Existing law doesn’t allow professional licensing boards to discipline a licensee if they use medical marijuana or are a primary caregiver for a registered medical marijuana cardholder. This measure would prohibit professional licensing boards from disciplining a person licensed by the board for lawfully using medical or recreational marijuana. It would also prohibit employers from punishing employees or prospective employees who express opinions related to marijuana.

The bill transfers responsibility for regulating medical marijuana from the Division of Public and Behavioral Health to the Department of Taxation.

Existing law allows a dispensary to accept an out-of-state marijuana card if it’s similar enough to a Nevada registry card and as of April 1, 2018, can be verified in certain databases. The bill allows a dispensary to accept a medical marijuana card regardless of whether it’s expired and allows a doctor’s note to qualify as the card in certain circumstances. It also removes the prospective requirement to verify an out-of-state card through a database.

Existing law requires a potential medical marijuana patient to get a doctor’s note saying they have a chronic or debilitating condition that might be alleviated by medical marijuana. The bill adds opioid addiction to the list of chronic or debilitating medical conditions. It also allows psychologists and other mental health and substance abuse workers to affirm that the applicant has an opioid addiction.

The bill expands the list of professional licensing boards that are barred from retaliating against licensees who take actions related to medical marijuana. Existing law includes the Board of Medical Examiners and the State Board of Osteopathic Medicine, but the bill would also include boards overseeing mental health professionals.

This bill makes many changes to business practices and rules for medical marijuana establishments, including

The bill allows the governor or a designee to enter into agreements with tribal governments within the state to facilitate cooperation in implementing state and tribal laws governing the use of medical marijuana. It also allows the governor to enter into similar agreements regarding the laws governing the adult use of recreational marijuana on or after January 1, 2020.

Marijuana-focused massages would be expressedly legal in Nevada law under SB396. The measure would allow a health care provider or massage therapist to administer a “marijuana-infused product” such as an oil or ointment to a client if the user provides the product or allow them to recommend use of a marijuana product to treat a condition.

The bill would also exempt health care providers or massage therapists from any crimes for administering or using a marijuana-infused product, and would prohibit professional licensing boards from disciplining them due to use of a marijuana-product. It would also include an addiction to opioids under the list of medical conditions for which a person can apply for a medical marijuana card.

This measure would allow for medical marijuana establishments to submit proposals for apprenticeship programs to state regulators.

Existing law sets limits on the number of medical marijuana licenses for each county. The bill allows municipalities to request additional dispensary licenses. Current law requires money raised from medical marijuana establishment applications first be used to administer the program, with excess money going to education. Gifts and grants must be used to administer the program or carry out certain substance abuse programs. The bill allows money to also support education and outreach about the safe use of marijuana.

Existing law requires the University of Nevada School of Medicine to seek federal approval to research medical marijuana and then carry out such research when the approval arrives. The bill would expand the law to all public Nevada colleges and universities.

The bill also limits the kind of rules that municipalities can impose on marijuana establishments. Cities and counties can’t create rules that go beyond zoning or land use or rules that aren’t applicable to all other types of businesses.

The bill prevents municipalities from imposing a tax on a marijuana business that exceeds 3 percent of the gross revenue of that business.

Question 2 legalized recreational marijuana consumption but generally bars its use in public places. The bill authorizes county commissioners to allow businesses where marijuana can be used, or to issue permits to organizers so marijuana is allowed at special events. It would limit those permits to businesses and events that are restricted to people 21 and older.

It also imposes a 15 percent excise tax on wholesale sales of recreational marijuana by cultivation facilities, which first goes to the Department of Taxation and local governments to pay for the costs of implementing Question 2, the ballot measure that legalized recreational marijuana in November 2016, with the remainder going to the Distributive School Account.

A number of proposals before the Legislature this session seek to amend the marijuana tax structure in the state by levying additional taxes or standardized the tax structure between medical and recreational marijuana.

Here’s a look at those proposals:

SB508: 10 percent excise tax on recreational marijuana for education (Senate Committee on Revenue and Economic Development on behalf of the governor)

The bill imposes a 10 percent excise tax on each retail sale of recreational marijuana or marijuana products. The proceeds of the tax will go to the Distributive School Account.

The bill imposes a 10 percent excise tax on each retail sale of recreational marijuana or marijuana products. It distributes 20 percent of the proceeds to the Increased Access to Mental Health and Substance Abuse Treatment Account (created by the bill) and 30 percent to the Distributive School Account, without regard to the location of the stores.

The bill also requires each county to create an advisory committee on mental health and substance abuse issues to make recommendations regarding the use of the money.

The bill eliminates excise taxes on wholesale sales by facilities that produce edibles or marijuana-infused products and on retail sales by medical marijuana dispensaries. It also revises excise taxes on wholesale sales by cultivation facilities to a rate of 15 percent of the fair market value at wholesale of the marijuana, making it consistent with taxes on a marijuana cultivation facility. If the bill passes, 75 percent of the revenue generated will be directed to the Distributive School Account and 25 percent will go to the Division of Public and Behavioral Health.

The bill also caps any license tax on a marijuana establishment to no more than 5 percent of the gross revenue of the business.

The bill creates an early start process for recreational marijuana sales in Nevada by exempting from state prosecution for certain marijuana-related crimes a medical marijuana dispensary that sells marijuana, concentrated cannabis, edibles, marijuana-infused products and related supplies to someone who is 21 years or older during the period of time from the effective date of the bill and the date upon which the Department of Taxation issues the first license to a marijuana establishment for the retail sale of marijuana and marijuana products.

It also prohibits medical marijuana dispensaries from selling products to a person that would exceed the amount decriminalized by Question 2.