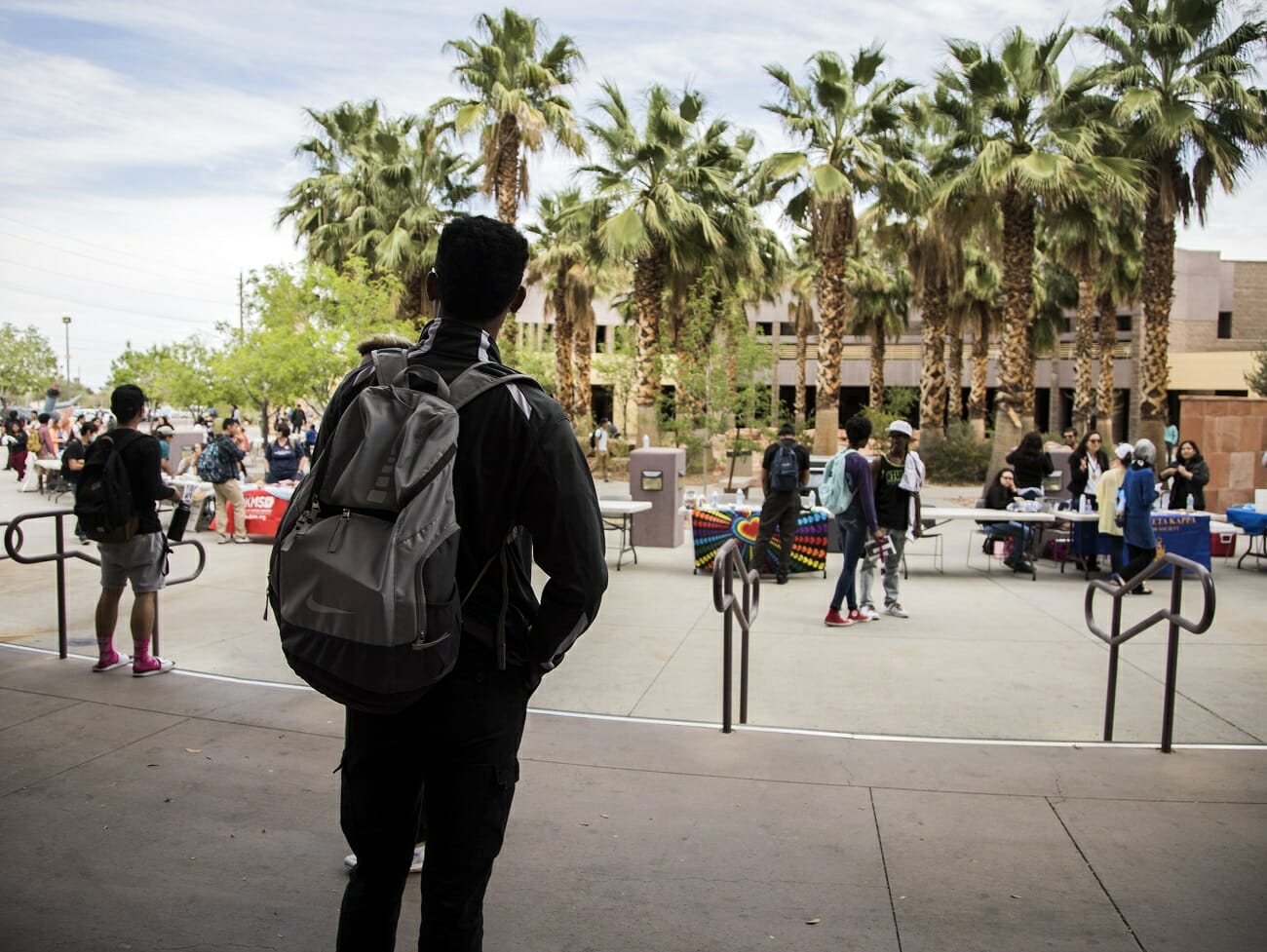 With graduation and transfer rates near the bottom of the pack nationally, there’s little disagreement among education and state officials that Nevada’s community colleges need improvement.

But a group of retired community college presidents and an outspoken Republican assemblyman have proposed a radical solution — taking the state’s four community colleges out of the purview of the Nevada System of Higher Education and creating an entirely new system from scratch.

That’s the idea behind AB331, a 272-page bill introduced Monday by Republican Ira Hansen that promises to move the state’s four community colleges into a new State Board for Community Colleges by 2018.

While it’s unclear how far the ambitious proposal will go in a Democratically controlled Legislature, with likely staunch opposition from the existing system, the larger questions are around higher education governance, whether or not community colleges are getting shortchanged on funding, and a growing sense of awareness of the post-secondary degree gap.  Those questions are expected to linger during and after the 120-day session.

“Why would you maintain the status quo?” Hansen said. “Anybody who looks at this from the perspective of improving government — this would improve it.”

The bill itself largely copies existing provisions and code from the existing Nevada System of Higher Education (NSHE), from the creation of a foundation to engage in fundraising to how disciplinary hearings are handled. It creates a nine-member governing board appointed by the governor, with requirements for racial and geographic diversity, with one member from a private business and one representative from a labor union. The new board would have similar powers as the Board of Regents.

It also ensures that existing state grants such as the Millennium Scholarship and Silver State Opportunity Grants would apply to students in the new system.

The measure also creates a 15-member “Articulation and Transfer” committee vested with the responsibility of ensuring course credits are smoothly transferred between state community colleges and four-year universities.

Former Western Nevada College president and bill supporter Carol Lucey, who resigned from WNC after a 13-year tenure in large part because of significant budget cuts, said that community colleges in the system likely would stick with the funding proposed in the existing two-year budget, but suggested that some of the existing funds for NSHE would be transferred over to pay for administrative staff to manage the new system, including an executive director.

Nevada’s four community colleges received $142 million from the state during the 2014-15 fiscal year, which is about 38 percent of the $374 million that the state budget allocated toward higher education institutions. But in addition to enrolling a larger number of students, the state’s two universities only get about half of their operating revenue from the state, while community colleges like Great Basin (78 percent) and Western Nevada College (75 percent) rely much more on state dollars.

A study from the nonpartisan Guinn Center found that the modified funding formula helped out Southern Nevada institutions while decreasing funding for rural colleges. State funding decreased 12 percent for Great Basin College and Western Nevada College between fiscal years 2013 and 2016, with TMCC staying relatively flat and the College of Southern Nevada seeing a 13 percent bump in funding.

Former Truckee Meadows Community College (TMCC) president John Gwaltney, another supporter of the bill, said while ideally legislators should revisit the amended college funding formula last approved in 2013, the difficulty with handling such a complex topic during the short legislative session was unappealing.

“I think that we decided the divorce was more important than the settlement,” he said.

Questions of reform and tensions between lawmakers and the system reached a fever pitch in 2016 when the Las Vegas Review-Journal revealed system officials attempted to mislead an interim legislative committee charged with tackling the state’s complex college funding formula.

Democratic Assemblyman Elliot Anderson, who in May 2016 pledged to tackle higher education reform in the wake of the article, said that while he hadn’t had a chance to read the bill, he was generally open to the idea and other legislative efforts to increase higher education oversight.

“I think there is a strong bipartisan consensus for reform,” he said. “I feel very good that something with happen this session, and I think it’s very important for the Legislature to assert itself so we change the dynamic for what's going on with higher education governance to ensure that we have a culture of accountability.”

Anderson also noted that his proposed constitutional amendment to remove the Board of Regents from the state’s Constitution could undercut any legal efforts by the system to keep community colleges under their purview. Legislative attorneys believe that creating a separate community college governance structure wouldn’t violate the Constitution, but a final decision would likely be settled in court.

Hansen said the creation of a separate community college system would likely lead to more competition between smaller colleges and NSHE in terms of fighting over legislative priorities, which he predicted would lead to more equity.

That aspect of competition is one that worries system Board of Regents chairman Rick Trachok about the proposal, which he said wouldn’t benefit students at all.

He said while it may be good for administrators, the proposal wouldn’t do anything to help students and would discourage cooperation and cost-saving measures between campuses, like a recent decision to consolidate campus police at UNR and TMCC.

“This isn’t a close call for me,” he said. “Sometimes they’re close calls. I do not see anything whatsoever that benefits the students. There may be people who have axes to grind that will benefit, but not students.”

NSHE, which hasn’t taken a position on the bill, has made attempts to centralize and provide more support for community colleges in the wake of a 2013 interim study on how best to bolster community colleges, including creating need-based grants for students, an executive position to oversee collaboration between the four colleges and a committee of regents specifically dedicated to the schools.

But some advocates, such as College of Southern Nevada professor Sondra Cosgrove, believe that the regents will always tend to focus more on splashier topics such as coaching contracts or university research than the basic responsibilities and everyday teaching handled by community colleges.

“They are so wrapped up in athletics, and the medical school, that they spend zero time talking about teaching and assessment and the stuff we do at community colleges,” she said. “So from my perspective I don’t know that having a new board would be any better, but I think we could at least start from scratch.”

A recent report by United Way of Southern Nevada found that 54 percent of state jobs require some form of higher education, but that only 30 percent of state residents over the age of 25 have a post-secondary degree.

“For every engineer that’s cranked out of the universities here, there’ll be a need for eight technicians,” he said. “And the community colleges are just not equipped to do that, they don’t have the support financially, they just don’t have the facilities to do that, and that’s just not going to happen.”

In a statement, a spokeswoman for Gov. Brian Sandoval noted that the Republican governor included roughly $21 million in funding for career and technical training at community colleges in his final two-year budget and hinted that his support would rely on testimony from community college presidents.

“While the Governor will carefully review this bill should it arrive at his desk, generally recommendations related to the Nevada System of Higher Education are first vetted publicly through the Nevada Board of Regents,” spokeswoman Mari St. Martin said in an email. “The Governor will heavily weigh the testimony from the presidents of Nevada’s community colleges in assessing this measure and whether or not it supports his stated goal of closing the skills gap and promoting post-secondary credential attainment.”

Elko-based Great Basin Community College president Marc Curtis called the proposal a “bad idea” and said that it would lead to a wasteful duplication of resources already provided by the system and pit smaller community colleges against the state’s major universities in fighting for funding, which Curtis said would be a losing battle.

“On so many levels I think that this AB331 is wrongheaded,” he said. “I couldn’t support it, I couldn’t oppose it more strongly.”

College of Southern Nevada president Michael Richards was less direct but sounded concerned at the prospect of directly competing against universities for funding.

“Community colleges in Nevada require more attention and funding, but I believe that any structure designed to pit community colleges against four-year institutions will negatively impact all of our students as well as our efforts to diversify our workforce and strengthen our economy,” he said in a statement.

Truckee Meadows Community College President Karin Hilgersom said in an interview that she feared a system reorganization would lead to an unnecessary duplication of administrative resources, and called Sandoval's current budget for community colleges a "really good proposal."

"On the grounds of efficiency and effectiveness, I would oppose the bill," she said.

Lucey said she and other supporters wanted to get several Democrats to co-sponsor the measure ahead of a hearing on the bill and that she is confident legislators would give it a fair shake.

3/27: This story has been updated to include comment from TMCC president Karin Hilgersom.