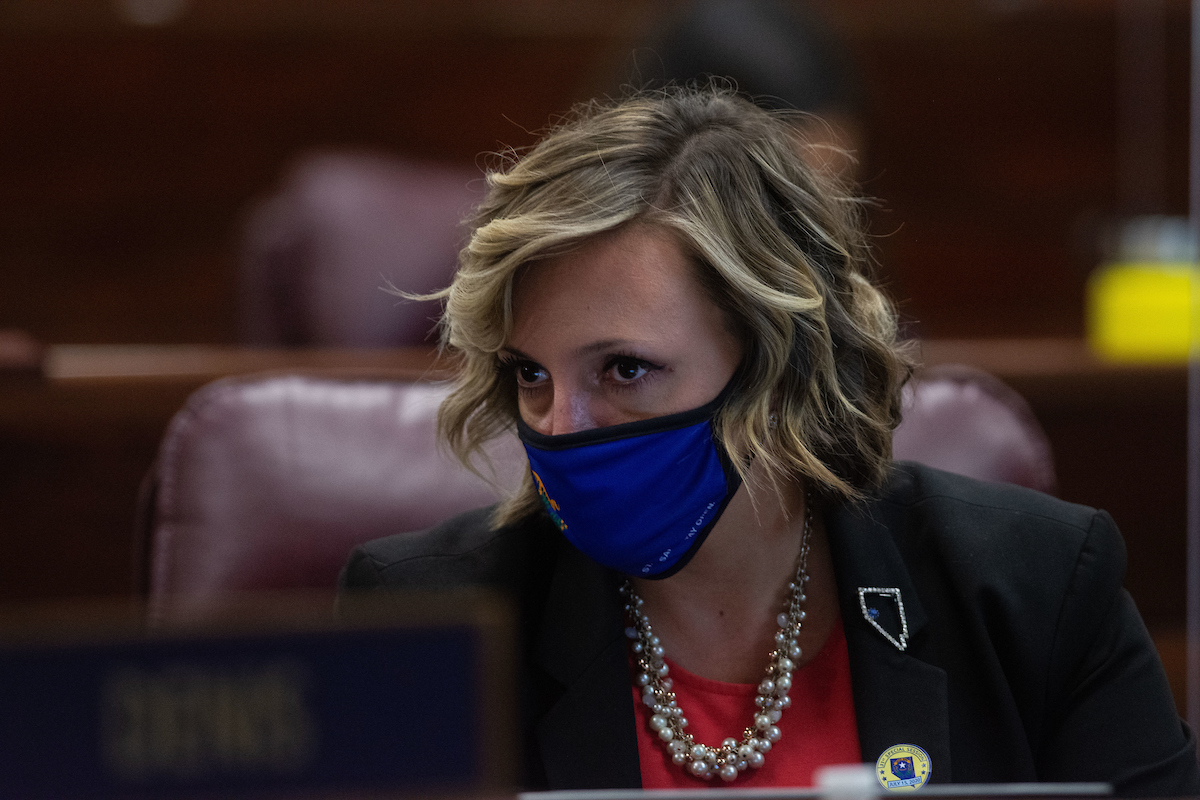 State Senate Majority Leader Nicole Cannizzaro accepted contributions earlier this year from her political action committee that was entirely funded by two fellow Democratic state senators who had already maxed out on contributions to her campaign.

Nevada law explicitly prohibits so-called “conduit contributions,” or donations made in the name of another person to get around contribution limits.

The law is also specific on making donations to PACs as a way to get around contribution limits, stating that it’s an illegal practice to “make a contribution to a committee for political action with the knowledge and intent that the (PAC) will contribute that money to a specific candidate which, in combination with the total contributions already made by the person for the same election, would violate the limitations on contributions.”

According to her most recent campaign finance report, Cannizzaro reported raising more than $114,000 between April and the end of June, including a $5,000 contribution from an entity called “Majority 2020,” a political action committee that lists her as its president.

But the only contributions taken in by “Majority 2020” this election cycle have come from state Sens. Chris Brooks and Joyce Woodhouse — both of whom have already contributed the maximum allowable amount of $10,000 to Cannizzaro’s campaign.

In a statement, state Senate Democratic Caucus Executive Director Cheryl Bruce — who is listed as the PAC’s registered agent — said the “contributions were made in the normal course of business of the committee for political action during an election season, as demonstrated by their disbursement dates.” Roberta Lange received her contribution ahead of a contentious state Senate primary; Cannizzaro received hers shortly before the fundraising period ended.

Brooks said in an interview that he gave money to the PAC to support Democratic candidates, and said “where it goes from there, obviously I have no control.” Woodhouse declined to comment in a text message sent after this story was published.

Deputy Secretary of State Wayne Thorley said in a text message that the contributions would violate state law if they "were made to the PAC with the knowledge and intent that the PAC would use the money to give to Cannizzaro."

Nevada’s campaign finance laws and restrictions are not particularly challenging to evade; many businesses opt to give more than the $10,000 contribution limit through making contributions via different business entities, and many donate campaign dollars to PACs, which are allowed to accept unlimited contributions but are subject to the same $10,000 donation limit to individual candidates.

It’s not unusual for legislators in safe races or in leadership positions to distribute campaign funds to candidates running in more competitive races. Brooks is not up for re-election until 2022 and Woodhouse is termed out of office.

But use of PACs to boost candidate fundraising numbers has in the past come under legal scrutiny. Former gubernatorial candidate Rory Reid was fined $25,000 in 2011 after it was discovered his campaign had set up a main umbrella PAC that took in more than $900,000 in contributions and dispersed them to more than 90 smaller PACs (all registered at the same Las Vegas address), which in turn contributed the maximum amount allowable to Reid’s campaign.

Though on a much smaller scale, the contributions from Cannizzaro’s PAC to her campaign appear to fit a similar bill.

Here’s how it happened: On March 31, the “Majority 2020” PAC received two separate $5,000 contributions from the campaign accounts of two Democratic state senators — Brooks and Woodhouse. Those are the only contributions the PAC has received this year.

Then, the Majority 2020 PAC reported making two expenditures on its most recent quarterly campaign finance report — $5,000 to the campaign of state senate candidate Roberta Lange on April 24, and $5,000 to Cannizzaro’s campaign on June 26.

But both Brooks and Woodhouse have previously contributed the maximum amount allowable under state law ($10,000) to Cannizzaro’s 2020 re-election campaign in the years and months prior.

Usually, contributions from a PAC to an individual candidate’s campaign account would not raise any eyebrows, as legislator-led PACs typically take in money from a variety of sources and not just other legislators.

While PACs are not required to report their cash on hand, publicly reported campaign finance totals indicate that the “Majority 2020” PAC only had about $716 in its account at the start of 2020 — meaning that the contributions to Cannizzaro had to have come from either Brooks or Woodhouse’s campaign accounts.

Both Brooks and Woodhouse also donated $5,000 to Lange’s campaign last year, so an additional $5,000 contribution would not put them over the legal limit. Brooks, however, did contribute another $5,000 to Lange through his “Brunch in Nevada PAC” in April and June 2020.

The Majority 2020 PAC has been operational since at least the 2012 campaign cycle, and has been used as a vehicle by Senate Democratic leaders to direct funding to their most in-need candidates. The PAC (then known as Majority 2016) distributed $30,000 to three state Senate candidates during the 2018 campaign cycle, for example.

Cannizzaro narrowly won election to her Las Vegas-area Senate District in 2016, defeating former Assemblywoman Victoria Seaman by slightly more than 1,000 votes out of more than 56,000 cast. Cannizzaro is facing off against Republican attorney and first-time candidate April Becker in the November 2020 election.