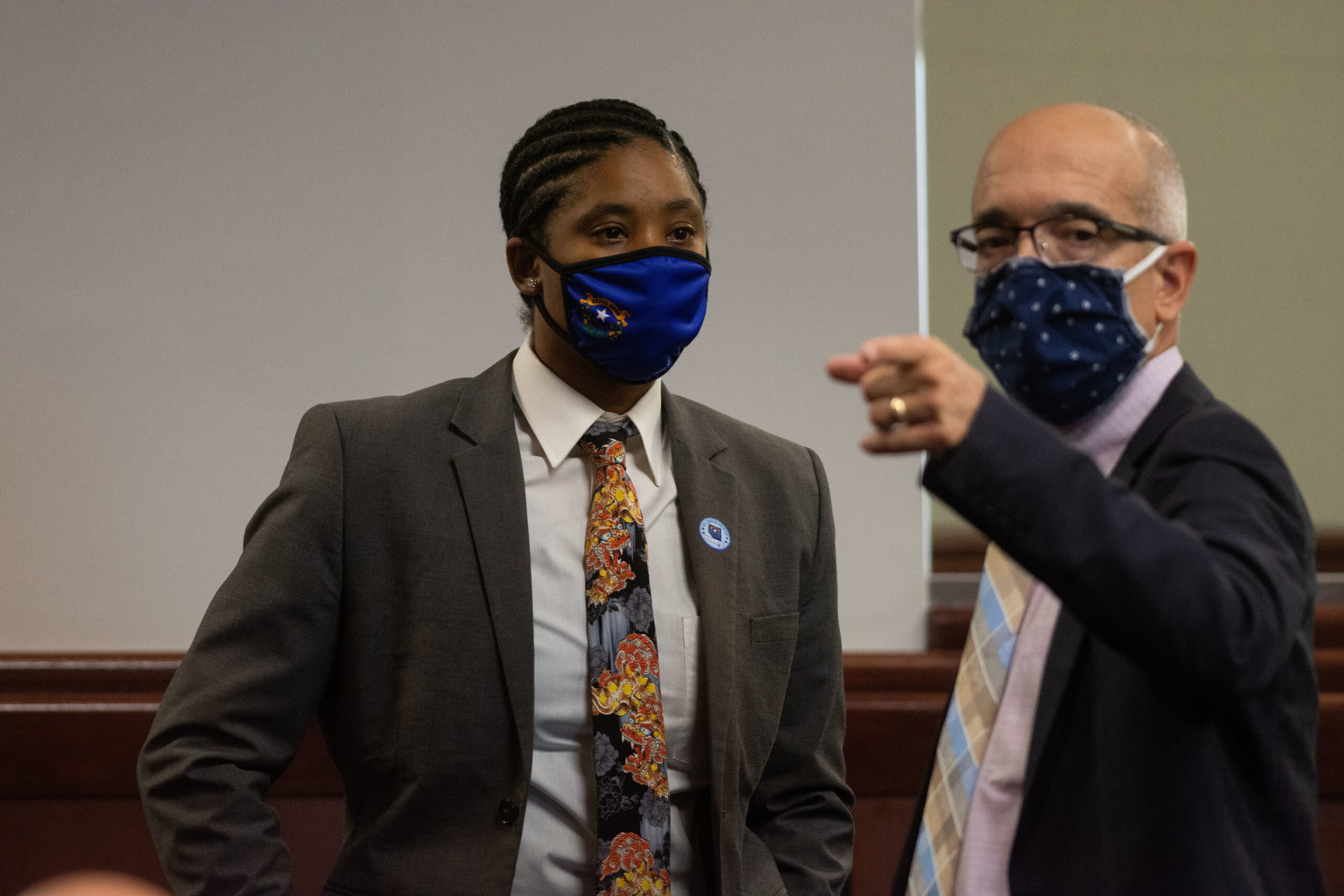 Sen. Dallas Harris (D-Las Vegas) has introduced a bill that would modernize the state’s laws on human immunodeficiency virus by treating HIV in the same way as other communicable diseases.

The bill aims to reverse practices established decades ago during the height of the AIDS epidemic — when little was known about HIV and AIDS — that have disproportionately affected already marginalized groups, including people of color and LGBTQ+ people.

“The priority for me is equality,” Harris said. “The goal is to remove the statutory stigma that was intentionally placed into our laws all the way across the country that's done nothing but harm to those who have contracted HIV.”

The bill, SB275, would repeal a Nevada statute that makes it a felony for someone who has tested positive for HIV to intentionally, knowingly or willfully engage in conduct that is intended or likely to transmit the disease. Repealing that statute would mean a person who has contracted HIV and who engaged in such behavior would instead be given a warning as their first offense and, after a second offense, would be guilty of a misdemeanor — a punishment that is in line with the treatment of other communicable diseases, such as chlamydia and SARS.

“These laws were written back in the ‘80s and ‘90s,” said André Wade, chair of the state’s Advisory Task Force on HIV Exposure Modernization. “Whenever there’s a specific call out of HIV, instead of including it as a communicable disease … then that, in and of itself, is stigmatizing.”

Wade, who also serves as the state director for Silver State Equality, an LGBTQ+ civil rights organization, explained that modernizing the laws is important because HIV is treated as though it is different and worse than other communicable diseases, even though it is not.

In 2019, the state’s HIV/AIDS Surveillance Program found that 11,769 Nevadans were living with HIV, with 27.6 percent of that group identified as Black, even though Black Nevadans comprise just 10.3 percent of the state’s population.

Laws criminalizing HIV arose at a time when little was known about the virus and treatment of the disease. However, as medicine has advanced, prevention medications have been created that eliminate the risk of HIV transmission. And public health experts have also learned that the virus does not spread through saliva, tears or sweat, or by hugging, shaking hands, sharing toilets or sharing dishes.

Samuel Garrett-Pate, communications director for Silver State Equality, said that outdated HIV laws have actually made it more difficult to contain the spread of the virus because of the stigma associated with the laws.

Harris said she wants to encourage more testing, and an important step in doing that is removing discriminatory language in the law. Her HIV modernization bill includes provisions to update the language around HIV and other communicable diseases and to ensure that people living with HIV are referred to more respectfully in state laws.

Harris also noted the importance of ensuring equality for all through the bill, including for sex workers and inmates. The bill would repeal a Nevada statute that allows for the segregation of inmates who have tested positive for HIV — which would codify into law a directive from a February settlement between the Department of Justice and the Nevada Department of Corrections that banned the segregation practice.

The bill is also aimed at addressing the spread of communicable diseases as a public health matter, rather than through criminalization.

Existing law allows health authorities to take certain action to investigate and control the spread of communicable disease, including ordering a person to be examined for the presence of a disease and ordering the isolation, quarantine or treatment of a person.

The bill would require any such order to include the reasons why the ordered actions are necessary to prevent, suppress or control the communicable disease.

The initiatives come largely from the work of Silver State Equality and the HIV task force.

The task force — established in the 2019 session through SB284, a bill that was sponsored by now termed-out Sen. David Parks (D-Las Vegas) — was created to address stigma surrounding HIV and to update HIV laws in Nevada based on how the public health understanding of the virus has advanced over previous decades.

Since its commencement, the task force has worked to create a report ahead of the current session that includes many of the recommendations realized in Harris’s bill. And with a provision in the bill that would re-establish the task force for the 2021-22 legislative interim, the task force could continue its work on understanding how Nevada’s HIV laws affect those who have contracted the virus.

Wade and Harris both acknowledged that there is more work to be done beyond what made it into the bill, but Wade said he thinks that the bill does most of what he and the task force sought to accomplish.

Harris said she has another bill, SB211, that would require primary care providers to offer STD and HIV testing to anyone aged 15 and older and that would work in tandem with SB275.

“Testing, testing, testing, right. If we learned anything from coronavirus, it's, ‘go get tested,’” Harris said. “So that's another piece. I'm hoping that's going to work together with this modernization bill to break down some of those barriers.”

The HIV modernization bill is scheduled for its first hearing during a meeting of the Senate Health and Human Services Committee on Thursday. Harris said she expects a positive response.

“I expect it to be well received,” Harris said. “The task force has done a lot of the groundwork on this… This is a result of months and months and multiple meetings with law enforcement, with [district attorney] aides, with communities of those who are living with HIV… with our health departments, with all of the stakeholders at the table.”