Advocates say taxing, regulating companies such as Airbnb could raise millions in taxes; opponents say it could hamper industry 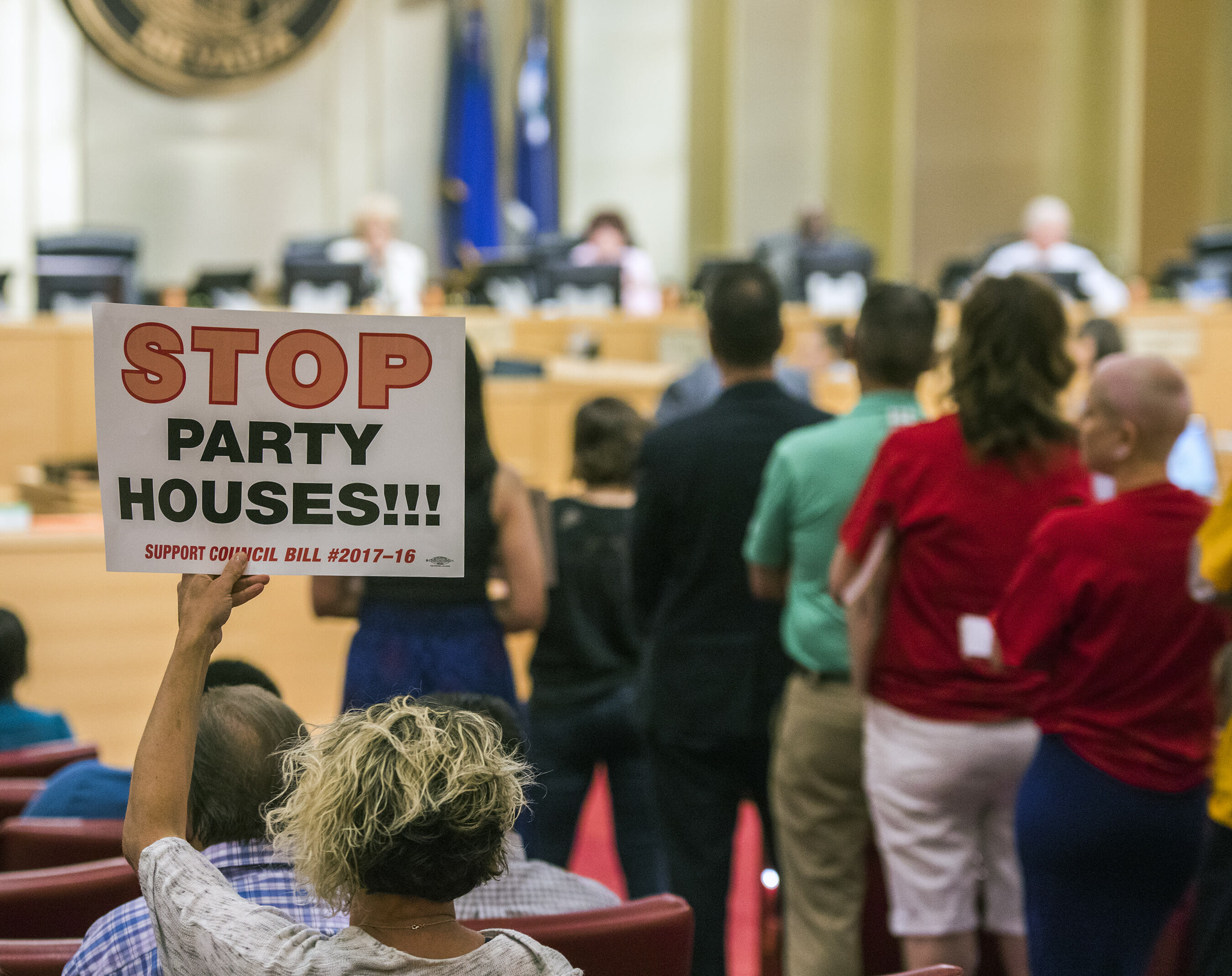 State lawmakers believe they can unlock millions of dollars in untapped tax revenue by regulating and taxing short term rentals facilitated by companies such as Airbnb at the same rate as hotels — though opponents warned that legislative overreach could lead to the industry driven out of the state.

AB363, sponsored by Assemblywoman Rochelle Nguyen (D-Las Vegas) and heard Thursday in the Assembly Revenue Committee, would establish requirements, rules, enforcement mechanisms and tax collection methods for short-term rentals brokered by companies such as Airbnb, Vrbo and other third-party services that rent out rooms, apartments and homes for a short period of time.

The bill attracted a broad swath of supporters, including the Nevada Resort Association, Culinary Workers Union, real estate agents associations and progressive groups, who identified lack of short-term rental regulation as part of the reason for uncontrollable party houses, a dearth of affordable housing and a siphoning of guests away from already established resorts and hotels.

Opponents of the bill, however, warned that the regulations would decrease tourism revenue, reduce growth of the state’s short term rental market and infringe on individual property rights — representatives from Airbnb wrote in a letter that the original draft of the bill “would essentially ban any meaningful short-term rental activity.”

For her part, Nguyen said she didn’t believe that outright bans on short-term rentals was the right policy solution, but that lawmakers needed to have some oversight over the industry.

“Right now, I suggest you look at your app for Airbnb, or HomeAway, or Vrbo or any of the other types of apps, and you will see hundreds, if not thousands of listings, most of them operating unlawfully,” she said, referring to the official (but rarely enforced) ban on short-term rentals in unincorporated Clark County. “We are not collecting those taxes, we are not collecting that revenue, and so I believe that there does need to be parity in this situation.”

The bill would require cities or counties to include short-term residential spaces in the definition of “transient lodging” — meaning they’d be subject to the same taxes that hotels charge guests. It also would create a process requiring anyone renting out a room or space to submit an application for a permit, pay an annual fee to maintain that permit, designate a local representative for the rental and maintain liability coverage for their unit.

The measure could have some substantial tax benefits for both the state and local governments — Airbnb alone estimated in a letter opposing the bill that it could have collected and remitted up to $14.5 million in hotel room taxes on behalf of hosts in 2019. Taxing short-term rentals was also mentioned by Assembly Speaker Jason Frierson as one of the potential funding solutions to meet recent recommendations by the Commission on School Funding to bump per-pupil spending up to the national average.

Nguyen described the measure as a “dynamic working document” — noting that by her count, she had held roughly 72 meetings, phone calls and video conferences with individuals and interest groups on the measure ahead of the hearing on Thursday, and expected even more changes to come in the enforcement aspects of the bill.

“Is it going to be a perfect bill?” she said. “No, no bill exists, but it is definitely a step in the right direction.”

The bill, plus a conceptual amendment presented to committee members on Thursday, included these provisions:

The conceptual amendment would also grandfather in any pre-existing approved short-term rentals from the provisions of the bill, and only would apply to a county with a population greater than 700,000 — meaning it would only apply to Clark County.

Local governments would have the authority to suspend a permit or impose fines or penalties if someone violates the ordinance, but could not enact an outright ban on short-term residential rentals. The bill also requires individuals or entities renting out a space in a residential unit to pay taxes to the county or city as applicable.

Assemblyman Tom Roberts (R-Las Vegas) said he planned to-cosponsor the bill, and that another enforcement-focused amendment would be coming aimed at giving police and code enforcement departments more tools to go after non-compliant rentals.

“I know from my law enforcement time that (short-term rentals) and the bans that we have in Clark County provide a number of issues for neighborhoods throughout the valley, and our police officers don't have the tools necessary to police those, neither do code enforcement,” he said.

However, that bill did not address the current patchwork network of short-term rental regulation found throughout the state — only three counties (Clark, Washoe and Douglas) and a handful of cities have adopted formal policies on short-term rentals. The policies range from total bans (unincorporated Clark County) to only owner-occupied homes (City of Las Vegas) to requirements that each unit have a landline telephone (City of Mesquite).

Airbnb lobbyist Adam Thongsavat said that while the company thought the conceptual amendment offered a fair and balanced approach, it still had major concerns that a buffer around gaming establishments, distance requirements between short term rentals and a two-night minimum would not help Nevada’s tourism economy recover.

“Now is the time to help draw visitors to Nevada in a safe and healthy manner,” Thongsavat said.

“The current Washoe County ordinance does not protect our neighborhoods, or our community at Lake Tahoe,” Tycer said. “After two years of pleading with the county, we still have no limits on numbers or locations of [short-term rentals] throughout our Lake Tahoe Community.”

Numerous Airbnb hosts also called in to oppose the legislation, citing fears about loss of income and noting that their short-term rentals do not disturb the peace or affect neighbors.

“My home is not loud or disruptive to my neighbors. If it was I wouldn't have been able to do this business successfully for four years,” Las Vegas resident and Airbnb host Melissa Cassidy said. “There are all kinds of travelers. Let’s keep up with the world and provide them all kinds of options in Vegas. I miss hosting. I miss my guests. I urge you to make Airbnbs legal, but without the proposed arbitrary distance restrictions.”

However, supporters praised the additional regulations for ensuring a “level-playing field” for hotels and gaming industries.

Jim Sullivan, a lobbyist for the Culinary Union, said additional restrictions on short-term rentals were needed to deal with the state’s constant lack of affordable housing; short-term rentals are often blamed for contributing to housing shortages as investors purchase properties without the intent of renting them out long term. He said workers on the Strip with variable work shifts also complain about the prevalence of rented party homes.

“Workers have complained of party houses that keep them and their neighbors up at night, and have turned their neighborhoods into unruly, unofficial resort quarters,” he said.

Local governments not affected by the bill expressed gratitude for the conceptual amendment, but Wesley Harper, executive director of the Nevada League of Cities, opposed the burden the bill places on smaller jurisdictions in Clark County with limited finances or manpower.

“We hope that the committee views this bill with scrutiny and respects the purview of local governments to properly govern according to the direct and unique needs of our residents,” Harper said.

Lawmakers took no immediate action on the bill, which has been exempted from legislative deadlines. Nguyen said she’ll continue to work on issues brought up by bill opponents, but reiterated that lawmakers likely needed to do something on the issue this session.

“I do think that this is a step in the right direction,” Nguyen said. “The genie is out of the bottle and we need to address it head on.”