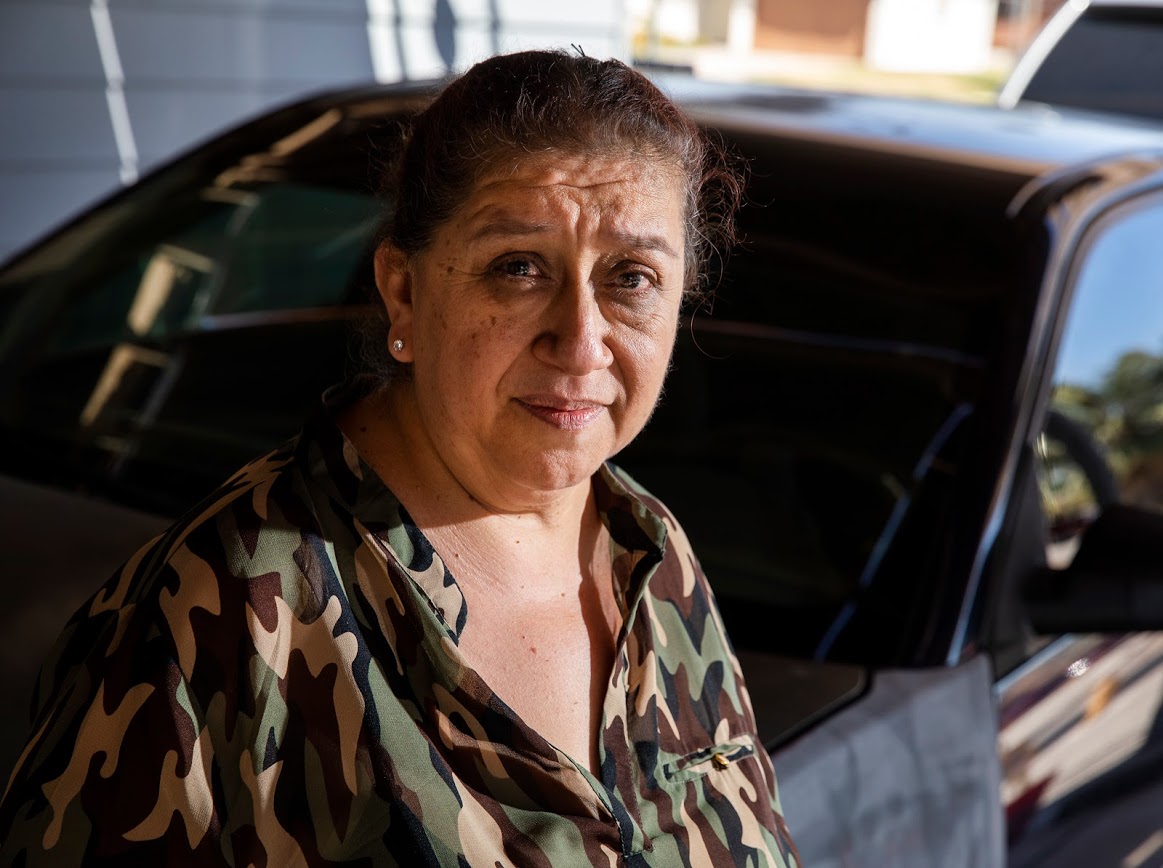 Mario Sandoval was a waiter at Binion's Gambling Hall and Hotel’s steakhouse in downtown Las Vegas for 36 years but has not worked since mid-March of 2020 — when casinos were closed because of the pandemic — along with thousands of Nevadans in the tourism and hotel industry.

Months passed and several hotels, casinos and restaurants reopened with capacity limits, including Binion’s, but the restaurant where Sandoval worked remained closed.

In January of this year, he received a letter informing him that he had been terminated. Sandoval, who is 53 years old, says he does not have the time or skills to pursue a new career, nor can he retire early.

“What we're seeing is a lot of older workers who are in their 50s or 60s, they just have maybe 10 years to retirement or five years to retirement, and they are really worried that they won't get these jobs now that they're competing with everyone else for the job they had previously,” said Bethany Khan, a spokeswoman for the Culinary Workers Union.

Thanks to his daughter, who lives with Sandoval, he was able to get by during the pandemic. Sandoval said his daughter never stopped working and took on the responsibility of covering household expenses and supporting him.

Although Binion’s has a contract with the Culinary Union, Sandoval fears his former restaurant managers will not call him back, preferring to hire someone new with a lower salary. He not only fears for himself, but also for his colleagues in other hotels and casinos who do not have contracts with the union.

“Companies should not waste time and money trying to hire and train new people when there are people like me with so much experience just waiting for our workplaces to bring us back,” Sandoval told The Nevada Independent. “I should not be replaced or abandoned for a younger worker when I have spent my life working for this company. I should not have to start my career over when I am so close to retiring with dignity.”

Culinary Union officials hope to avoid that competition with SB386, the so-called “Right to Return” bill, which would require companies to offer any employees laid off during the pandemic their jobs back, but negotiations between the resorts and Culinary Union are ongoing.

During the bill's first hearing, opposing testimony from the Las Vegas Chamber, Henderson Chamber of Commerce, Reno Sparks Chamber of Commerce, Southwest Airlines, Boyd Gaming Corporation and Caesars Entertainment included objections about a provision they said would cause unnecessary litigation: It would allow workers to bring civil actions against employers who do not comply with the requirements of the bill.

Some opponents of the bill also said that companies have supported their employees through the pandemic and that the measure would hinder efforts to bring back employees because of its “time-consuming” requirements and the potential of distracting management from its rehiring efforts to deal with lawsuits.

A statement from an attorney with South Point Hotel Casino and Spa submitted in opposition said that management continued to pay health insurance premiums after furloughing employees out of a “concern for the employees’ welfare.”

The measure was presented on April 7 by Senate Majority Leader Nicole Cannizzaro (D-Las Vegas) and aims to ensure that laid-off hospitality and tourism employees are granted the option to return to their prior positions.

If passed, the law would apply to workers who were laid off after March 12, 2020 and who were employed for at least six months prior to the first COVID-19 emergency declaration issued by Sisolak.

The measure received a waiver so negotiations could continue past legislative deadlines between the Senate Commerce and Labor Committee, the Culinary Workers Union and hotel companies.

Khan declined to elaborate on the state of negotiations this week. Asked about the status of negotiations on Thursday, Virginia Valentine of the Nevada Resort Association said her group is carefully watching the bill and having conversations about it.

“It’s a complicated bill with a lot of stakeholders so I wouldn’t expect to hear anything right away,” she told The Nevada Independent.

Khan said one of the benefits of the bill for union members would be the right to be recalled from a layoff for up to two years, depending on contracts with the company.

Essentially, employers would be required to reinstate a laid-off employee before hiring someone new for that same position. For example, if a former employee has not worked since March 2020, the employee could return to work at the company until March 2022 — if their employment contract allows for that two-year recall period, Khan said.

Under this protection, union members would be called back to work by seniority, and would keep the same job title, benefits, salary and health care plan.

Maria Balandrán was a buffet cook assistant for 18 years at Green Valley Ranch Resort in Henderson, a Station Casinos property that does not have a contract with the Culinary Workers Union.

Balandrán and her fellow employees voted to unionize in 2017, but the company legally challenged the formation of a union. A D.C. Circuit Court denied the company’s final appeal in 2020, but no union contract has yet been established.

In May 2020, someone told Balandrán to check a Facebook page where the names of people who had been terminated had just been published. And there she saw her name.

Balandrán has no guarantee the resort will hire her again in her same position. As it stands, she will have to reapply for work alongside dozens of people who have lived the same situation and are also looking for work.

“My daughters depend on me and on what I earn. When they took us out of work I had to ask for unemployment. I had never asked for unemployment, I have always worked,” Balandrán said in Spanish in an interview with The Nevada Independent. “And I had to apply for [Medicaid] for my daughters, and I had to apply for food stamps, things that I had never done. It is the first time that I have had to depend on these benefits in order to support my daughters.”

Since then, Balandrán, who is a single mother of three daughters, has been able to survive and support her family with help from the state and federal government, including unemployment support, food stamps and stimulus checks.

“Workers like Maria that are terminated and want to go back to work, would have to reapply, reinterview, compete with other workers for her job but she had before. And then be at risk of getting paid $3 to $4 less an hour for the same exact job she was doing for 18 years,” Khan said.

A Station Casinos spokesperson testified in opposition to the measure during the bill’s hearing, saying that the measure would “damage those employers who are still fighting to recover from the pandemic by creating burdensome, time-consuming requirements that complicate and discourage rehiring.”

The spokesperson did not answer The Nevada Independent’s inquiries about the company's rehiring processes — or about former employees finding out about terminations through a Facebook post.

Sandoval is hopeful that when business capacity returns to 100 percent, many of his industry colleagues will be able to return to their jobs. In recent months, some local hotels and casinos have held several job fairs to fill open positions.

“We know those companies are going to open, and they're going to open soon because June 1 is coming. And they’re supposed to change the [capacity] mandate to 100 percent, and that's when you're going to see money,” Sandoval said. “We're a well-trained staff and ready to go back to work. Don't have to train you, or any of it. We're just ready, and been waiting.”

A year after Gov. Steve Sisolak ordered nonessential businesses in the state to shut their doors, including hotels and casinos, most have reopened and the number of visitors is increasing.

McCarran International Airport announced that it saw nearly one million more domestic flight passengers in March, a 60 percent increase compared to February. And Nevada casinos made more than $1 billion in gambing winnings last month, the state’s highest monthly gaming win in eight years, according to new data from the Nevada Gaming Control Board.

Starting May 1, Clark County will increase the indoor capacity limit for businesses to 80 percent, outdoor service will have no capacity limit and the social distancing requirement will be reduced to three feet. Buffets, adult entertainment venues and nightclubs can all reopen under these new regulations.

This week Wynn Resorts and The Cosmopolitan of Las Vegas announced that more than 80 percent of their active workforce has been vaccinated against COVID-19. As a result, the Nevada Gaming Control Board will allow the properties to open their casino floors to 100 percent capacity.

“We're bringing people back to work as fast as we can,” she said. “We're confident that we're going to bring as many people as possible, and obviously getting everybody vaccinated will help us a lot with getting fully open. The more people are vaccinated, the more people that are going back to work.”

According to the Culinary Union, 50 percent of the 60,000 members of the Culinary Workers Union have returned to work, but the other half are still waiting.

That figure does not include the hundreds of employees of properties that do not have a contract with the union.

Boyd Gaming told The Nevada Independent that its rehiring process includes first calling past employees to verify that they are interested in returning, but some have decided not to return and so the company has had to hire new team members. David Strow, spokesman for Boyd Gaming also said that as demand increases and business continues to recover, the company will “step up” its hiring efforts.

When asked about their rehiring process, Caesars Entertainment and Wynn Resorts chose not to answer. MGM Resorts International did not immediately respond to a request for comment.

Khan said SB386 would guarantee workers are not penalized or abandoned by their employers.

“Our stance is we cannot have a full recovery in Nevada without workers who make the number one industry in Nevada, which is tourism and hospitality,” Khan said. “Workers cannot be cut out or left out of the recovery.”