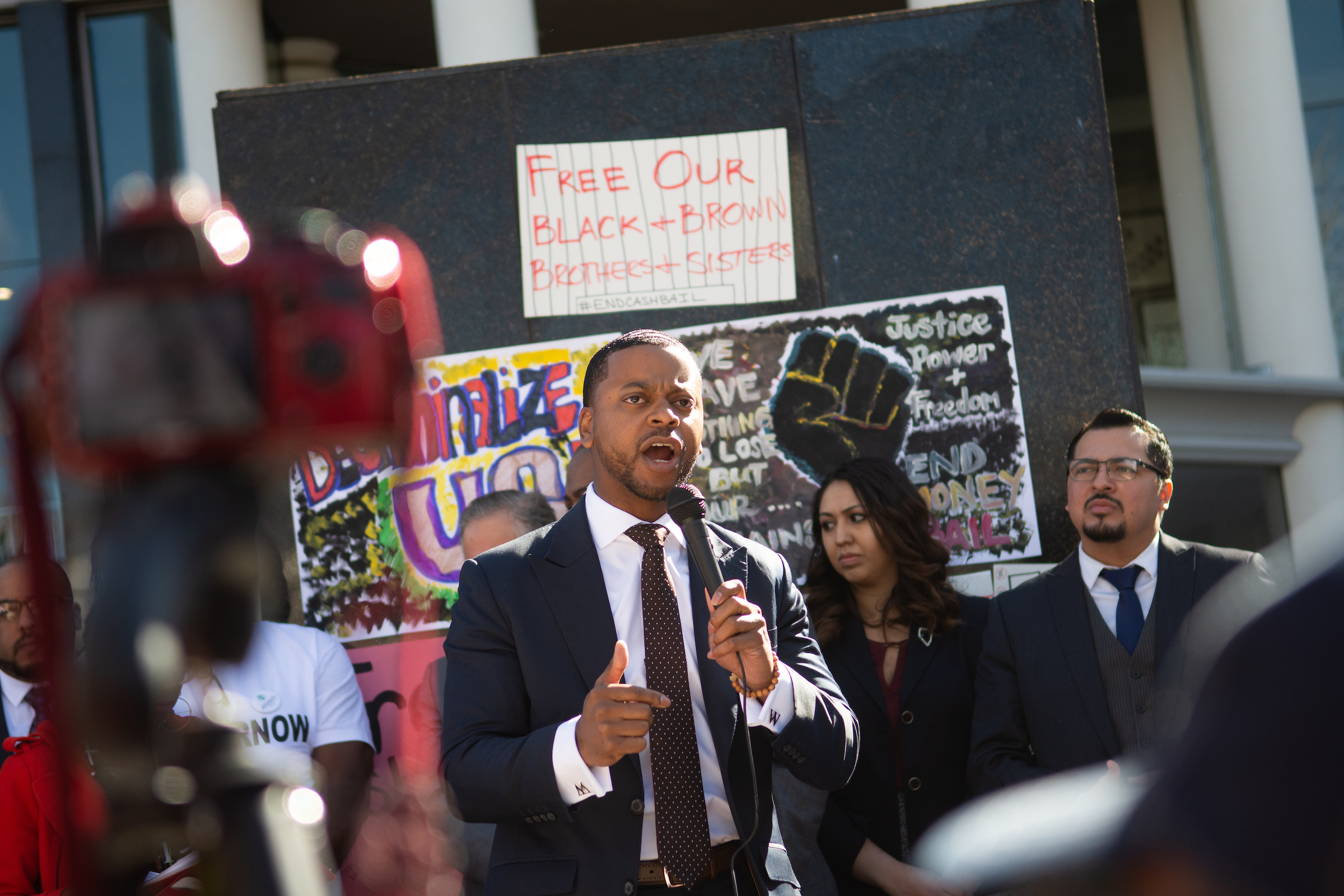 Efforts to reform Nevada’s bail system for cash bail are still on life support, with any movement likely to come down to the wire as the legislative session draws to a close.

Despite a flurry of rallies and campaign pledges to “end cash bail,” no surviving bill in the Legislature at this point would entirely do away with the process of requiring some monetary deposit in return for pretrial release, and other bills that attempted to substantially overhaul the system have largely fallen by the wayside.

Instead, what may be the last potentially major changes to the state’s bail system are alive in the form of Democratic Assemblywoman Dina Neal’s AB125, which was passed out of the Assembly on a party-line vote Friday, but it likely faces an uncertain path as law enforcement and district attorneys question the implementation and effectiveness of the bill.

“I feel like this is going to sound cliché, and you’ve probably heard this a million times, but nobody is really happy with it, which generally means that it’s a decent piece of legislation,” Clark County Public Defender’s Office lobbyist John Piro said in an interview.

The bill creates a “rebuttable presumption” that the vast majority of defendants arrested on suspicion of a crime should be released on their own recognizance (without conditions), and that monetary bail only be imposed if a judge determines other conditions of release are not adequate to ensure a person will return to court. It was amended significantly from its original version, which initially made minor tweaks to what a judge must consider before requiring a defendant pay bail.

The amended measure would require courts to hold “individualized custody review” hearings within 72 hours of any defendant being arrested, including weekends and days that a court is not in session, where a judge is required to review custody status and grant pretrial release if appropriate. During that hearing, a court would be required to issue an administrative order detailing conditions of pretrial release, and the bill also sets a requirement that a person be released with the “least restrictive conditions” outside of first degree murder cases.

It requires judges to condition release — between unconditional release, regular check-ins, home monitoring and requiring cash bail — based on factors deemed necessary for community safety, victim safety and to ensure they appear in court.

Kendra Bertschy, a lobbyist with the Washoe County Public Defender’s Office, said that those provisions in the bill were intended as a way to ensure people arrested throughout the state could expect the same treatment prior to a trial no matter where they might have been arrested.

“Our goal with this bill is just to make sure that everyone has an idea of what the process is going to look like, and then the judge really has to consider the individual, has to consider the facts of the offense, has to consider all those issues before deciding on a bail schedule,” she said. “This is something that’s going to impact anyone who is arrested. People find out what their bail is set at and have this hearing, and they’ll have a different process than they would have prior to this.”

But setting requirements for quick turnarounds on hearings and bail schedules could prove difficult in other counties, Washoe County District Attorney's office lobbyist Jennifer Noble said, adding that the bill as drafted would put stringent requirements on smaller rural courts that would face difficulties in keeping up with the requirements in the bill.

John Jones, a lobbyist for the Clark County district attorney’s office, said the bill was still being worked on and as written would “cause more problems than it solves.” But he said his office had been an “integral part” of efforts to improve the bail and pretrial release system in Clark County, and wanted to be sure that any changes made in the Legislature were effective.

“It’s a work in progress,” he said. “But to say that we’re against bail reform is not true. We’re always willing to look and see what other people are doing, best practices, and make the changes accordingly.”

During custody review hearings, the bill would require judges to release any defendant charged with a misdemeanor that does not involve the use of force or violence, and would require any person charged with a gross misdemeanor or lower to be released without conditions as long as the underlying crime does not involve violence or is a sexual offense.

Notably, it also requires any monetary bail not be set on a predetermined schedule, and instead requires bail to be based on the financial resources of the dependent and must be set to “ensure reasonably” the person will appear in court and not pose a danger to the community. It also requires that any defendant eligible for pretrial release not be detained solely for a financial inability to pay bail.

Piro said those provisions were intended to make sure that arrested persons were not stuck in jail on minor charges because they couldn’t afford whatever a judge ordered for bail.

“That’s what's happening right now,” he said. “If you have money, $5,000, $10,000, that’s nothing to you. If you’re homeless, you get caught sleeping on a park bench and the judge sets your bail at $1,000 because that’s the ‘bail schedule,’ you might as well make it a million because that homeless person isn’t getting out.”

Democratic Assemblyman Steve Yeager, who chairs the Assembly Judiciary Committee, said the provisions in the bill had various carve outs for public safety and other concerns for a judge to set cash bail, but that it was intended to give judges a chance to reassess bail if its found a person could not afford it.

“I envision that going into the finances and lowering the bail is going to happen in situations where we're not talking about the crime of the century, and maybe it was a close call between release without bail and bail,” he said.

The bill also makes other changes to bail rules, including prohibiting the state from changing a recommended bail schedule in a criminal complaint if it presents the same case and receives an indictment from a grand jury. It also requires each court to compile and report decisions on individualized custody release decisions annually to state lawmakers, though Piro said that section was likely to be removed amid cost concerns from courts.

The amendment is in some ways a continuation of ongoing discussions and negotiations between law enforcement, district attorneys, public defenders and civil rights groups that began with Democratic Assemblyman Ozzie Fumo’s AB325, which would have more substantially changed the state’s rules and procedures for granting cash bail. Fumo said in a brief interview that he was not involved in discussions on AB125, hadn’t requested to be added as a co-sponsor and hadn’t yet read the bill.

Yeager, who chairs the Assembly Judiciary Committee, said the discussion on bail had centered on both bills but that the “decision was made” to go forward with AB125, which is sponsored by Democratic Assemblywoman Dina Neal.

“We had waivers on both and could have gone in either direction but I think it made more sense to go with 125,” he said. “So really, it is the product of the work that was done on 325.”

Yeager declined to predict whether any major changes to the state’s bail system would make it through the session with only days to go before sine die.

“On the Assembly side, we’re intending to move something out that’s significant,” he said. “We’ll see what it comes back looking like if it comes back.”