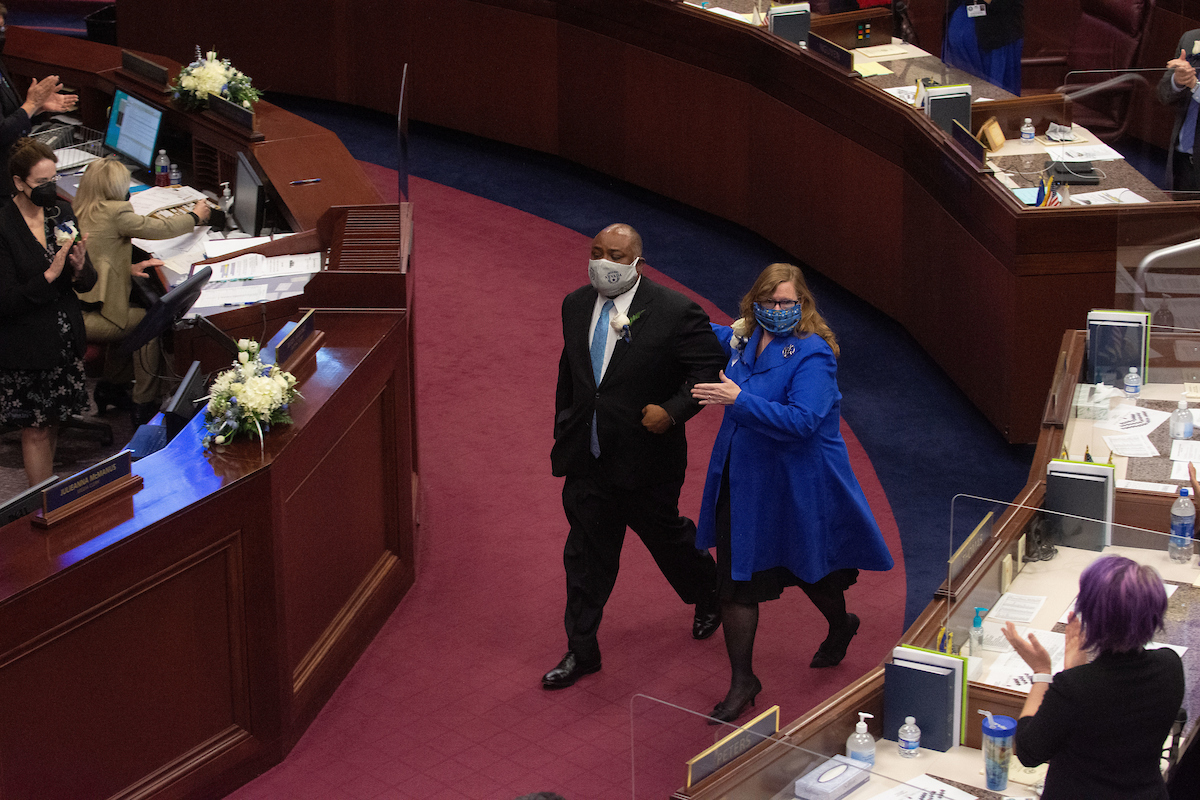 One of the 2021 legislative session's hot button issues has been the effort to expand tenants' rights and protections amid pushback from homebuilders and landlords who say some proposed changes could lead to increased home construction prices.

But on Monday, both sides said they support proposed legislation that would give renters more of a heads up on rent increases, even as there was a less warm reception for a bill that would create a statewide landlord database and registry.

AB308, sponsored by Speaker Jason Frierson (D-Las Vegas) and presented during an Assembly Commerce and Labor Committee hearing, would increase the timeline for notification of rent increases from 45 to 60 days in advance for rentals that are longer than a month and increase it from 15 to 30 days for a tenancy that is less than a month, such as weekly rentals. Frierson's bill also proposes that a landlord may not charge a late fee as long as the rent is paid within three calendar days of the due date.

"Housing continues to be a large percentage of a family's monthly expenses," Frierson said. "As Nevada continues to see slower economic recovery, as compared to other states across the country, I believe it's critical that we find ways to help tenants adequately prepare for the unexpected while not placing excessive burdens on landlords."

"We know there are some landlords who are not as transparent and may not have that kind of relationship with their tenants," McKee said. "Both of the time periods proposed would now require such transparency from all landlords, in a way that is fair and equitable."

Bailey Bortolin, a representative of the Nevada Coalition of Legal Service Providers, said the bill would help tenants dependent on Social Security Income that typically comes on the third of the month.

"Many [Social Security recipients] have been paying a late fee every month for over a year now, because they don't have an opportunity to catch up," Bortolin said. "So, this will be much needed reprieve for those members of our community."

Another bill heard Monday aimed at increasing transparency around the rental market was met with less enthusiasm.

AB332, sponsored by Assemblywoman Sarah Peters (D-Reno), would require the Housing Division of the Department of Business and Industry to establish a registry of landlords.

The registry would contain:

The measure is designed to help policymakers understand the scope and trends within Nevada's rental market through an analysis of data collected over the next two years, Peters said.

"What I'm really looking at are market drivers … and how are we establishing policies and practices across the board at the state and the local levels to help both tenants and landlords manage in that marketplace," she said.

Assemblywoman Heidi Kasama (R-Las Vegas), former president of the Nevada REALTORS Association, said she worried that the data collected would place an undue burden on landlords, infringe on property rights and possibly lead to overregulation.

"What is the goal of all the data ?" Kasama said. "I do think it's getting into the business practice of the owners."

Kasama added that many renters and homeowners could already find existing data using Zillow or the tax assessor's office.

Peters pushed back against the idea, noting that housing data is not always consistent and AB332 would better inform lawmakers. There are also no punitive measures for those who do not comply with the law, Peters said.

"There's no decision being made based on this data, it is just really to inform us on what the market looks like and what's driving it," Peters said.

An amendment proposed by Peters specifies that the bill would only apply to landlords who use a property manager or own three or more units. It also stipulates that associations would report information on behalf of members, and landlords not part of an association would submit their own reports.

Peters said that the legislation excludes landlords with fewer than three properties because those smaller landlords are not huge rental market drivers. The two-year program would help lawmakers understand current trends, but not commit the state to a longer time frame unless future lawmakers wanted to expand the scope of the project, she added.

Assemblywoman Melissa Hardy (R-Henderson) raised concerns about privacy related to landlords' information. Still, Peters said that individual-level data would not be available to the general public, and analysts would aggregate the data before releasing it to an outside party.

As drafted, the Nevada Housing Division estimated that AB332 would cost the state around $400,000 over the next two fiscal years. The funding would provide the division with enhanced rental housing database software and salary for a management analyst to oversee the program.

Benjamin Challinor, a lobbyist with the statewide nonprofit Faith in Action Nevada, praised AB332 as a bill that would build transparency and accountability that goes beyond what sites such as Zillow have to offer.

"This bill will make sure that we're able to register landlords, identify bad actors, and actually go back and use that data in support of legislation in the future," Challinor said. "Other states have passed landlord registries, other municipalities have passed them, and it's done a great job out there."

Neither AB332 nor AB302 drew any public comments in opposition, and the Nevada State Apartment Association testified in neutral.

"Today's amendment is an excellent first step. We do have some concerns that rental statistics may quickly become stale," said Mackenzie Warren, a lobbyist representing the association. "We really appreciate this bill's push to make Nevada more transparent, which we think is critical in the battle to increase accessibility and affordability."