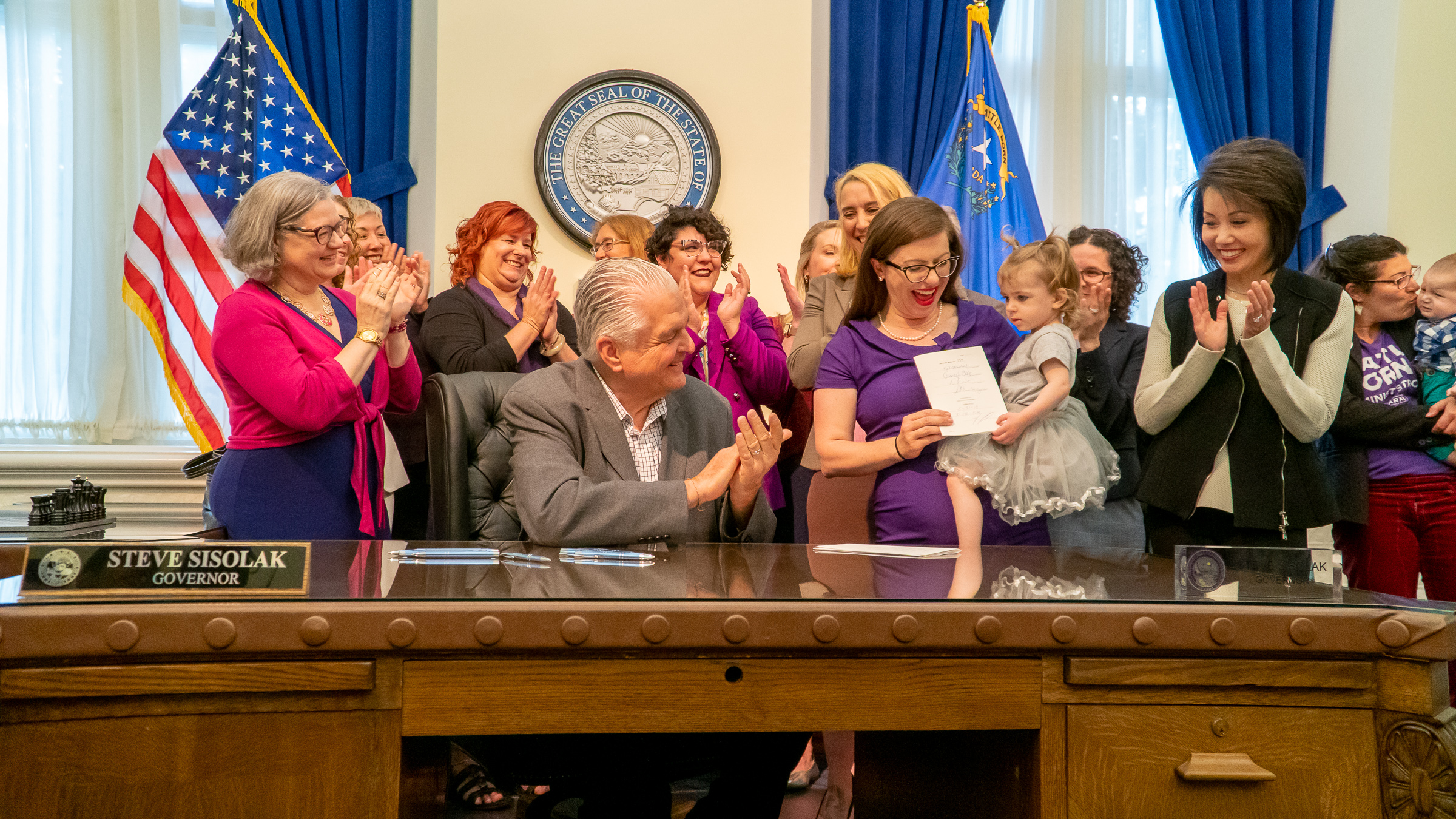 In a departure from recent action taken by the federal government and several Southern states on women’s reproductive health issues, Gov. Steve Sisolak signed two bills into law on Friday that would decriminalize abortion and prevent discrimination against recipients of state family planning dollars.

One of the bills, sponsored by Democratic state Sen. Yvanna Cancela, repeals felony criminal penalties on abortion that have been in place in Nevada since the early 20th century and also removes a requirement that doctors must share with patients the emotional implications of undergoing the procedure. The other, brought forward by the Senate Health and Human Services Committee, clarifies a law passed in 2017 by specifying how state family planning dollars can be spent.

Sisolak, who was joined by his wife Kathy at the bill signing, said he is “disappointed” by actions in other states to restrict abortion rights but that the two bills would “send a message to the rest of the country that Nevada is not going to go backwards” on issues of access to reproductive health care.

Alabama recently passed an abortion ban that makes abortion illegal in almost all cases, including rape and incest, while Georgia, Kentucky, Louisiana, Missouri, Mississippi and Ohio have passed restrictive “heartbeat bills” preventing abortions as soon as a fetal heartbeat is detected, which can be as early as six weeks into a pregnancy.

“I am especially proud today to be a Nevadan,” Sisolak said. “We protect a woman's right to choose to make her own decisions about her own body.”

The bill wouldn’t expand a woman’s ability to receive an abortion, which is typically limited to the first 24 weeks of pregnancy in Nevada. But Sisolak said that SB179 would repeal “outdated criminal penalties for abortion” and bring “antiquated consent laws” in line with medical standards.

“In light of increasing attacks at the federal level and in other states such as Georgia, Alabama, Missouri and Lousisana, SB179 reaffirms Nevada's commitment to protecting reproductive freedom and access to reproductive health care,” Sisolak said.

Caroline Mello Roberson, Nevada state director for NARAL Pro-Choice America, couched the legislation as “not just hope” for Nevadans “but for women across America who have seen that reality go the opposite direction.”

Several lawmakers who opposed the legislation expressed support for removing criminal penalties for women who receive an abortion outside the scope of state law, but voted against it out of concern that other penalties the bill repeals, including those on selling or giving away drugs to produce a miscarriage, could actually harm women. Opponents of abortion rights also argued during hearings on the bill that women should be told the emotional impliations of undergoing a procedure and that such information is medically relevant and therefore shouldn’t be removed from law.

The other bill, SB94, makes a number of clarifying changes to the state’s family planning grant program, including specifying that state dollars allocated toward family planning services can be used to pay for services offered by community health nurses, the main family planning providers in rural Nevada. It builds on legislation from 2017 creating a state family planning account and allocating $1 million to it.

This session, lawmakers have allocated $6 million for family planning grants over the next two years in their budget as recommended by Sisolak.

The bill’s passage comes in the wake of a final rule released by the Trump administration blocking groups that provide abortions or refer to abortion providers from receiving any federal dollars through Title X. The rule would prevent Title X recipients in Nevada from referring patients to abortion providers unless the patient has already decided to have an abortion and asks to be given a referral.

“As the federal government in Washington continues to cut funding for womens' health care we are stepping up to ensure that all Nevadans regardless of their zip code have access to reproductive healthcare,” Sisolak said. “Adequate family planning services are not only crucial to the wellbeing and the self sufficiency of Nevada's women, they're also central to the health and development of our communities.”

“This is all about women and men receiving care like birth control and cancer screenings and STI treatment,” Harmon said. “We are just incredibly thankful to you governor especially in light of what's going on nationally."

“Thanks to you, Nevada is leading the way in pro-women and pro-family policies that will make life better for all Nevadans across the state,” Sisolak said.