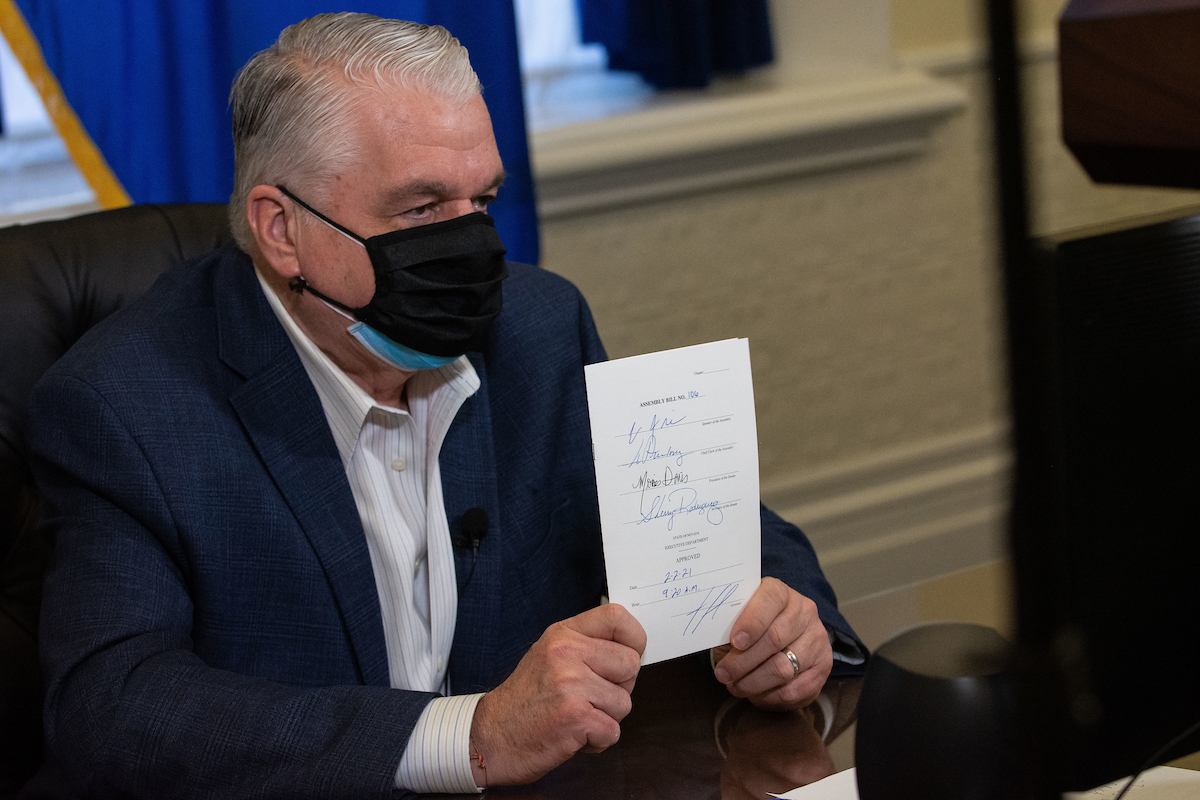 As Nevada lawmakers work through the final weekend before the adjournment of the 120-day legislative session, Gov. Steve Sisolak has also been busy fulfilling his end of the process — signing more than 40 bills into law on Friday and Saturday.

Some of the higher-profile measures signed by Sisolak over the past two days include bills aimed at allowing collegiate athletes to receive compensation, lowering the penalties for minors caught in possession of alcohol or small amounts of marijuana, requiring teaching about minorities and historically underrepresented groups and raising the legal and age prerequisites for a person to become state attorney general.

Sisolak had signed 174 bills into law as of Saturday evening. Once bills are approved by both houses of the Legislature and sent to the governor’s office, the state’s chief executive has five days during sessions and 10 days after they adjourn to either sign the bill, veto the measure or allow the clock to expire, which causes a bill to automatically become law.

Sponsored by Assemblyman Steve Yeager (D-Las Vegas), AB101 authorizes licensed veterinarians to administer products containing CBD or hemp in the treatment of an animal and to recommend use of such products to pet owners. It also prohibits the state Board of Veterinary Medical Examiners from taking disciplinary action against veterinarians who administer or use such products.

The bill passed unanimously out of the Senate and Assembly.

Specifically, the bill prohibits imprisonment or a fine and instead requires any such person under the age of 21 found in possession of the prohibited substances to perform up to 24 hours of community service, attend a panel of victims of persons killed or injured by intoxicated drivers or undergo an evaluation to see if they have an alcohol or substance abuse disorder.

The bill also requires the automatic sealing of criminal records related to underage possession once a juvenile successfully completes the terms and conditions set by a court.

It passed unanimously out of the Senate and Assembly.

This measure, sponsored by Assemblywoman Teresa Benitez-Thompson (D-Reno), requires most pharmacies in the state to provide specific instructions on the use of a prescription drug in a language other than English, if requested by the recipient. It exempts pharmacies from civil liability if they contract with a third party translation service and injury cannot be linked to the “negligence, recklessness or deliberate misconduct of the pharmacy or employee.”

The measure passed out on a party-line 26-16 vote in the Assembly, but passed the Senate unanimously after an amendment was added granting civil immunity to pharmacies.

Sponsored by Assemblywoman Shannon Bilbray-Axelrod (D-Las Vegas), the measure establishes regulations for veterinary telemedicine, allowing licensed veterinarians to practice telemedicine only after an in-person examination of an animal. Under the bill, veterinarians would not have to examine every member of a herd to consult remotely, and a doctor with access to medical records could also consult via remote communication.

The measure passed out of the Assembly on a 40-2 vote and then unanimously out of the Senate.

This bill from Assembly Speaker Jason Frierson (D-Las Vegas) would prohibit colleges or the National Collegiate Athletic Association (NCAA) from preventing student athletes from being compensated for use of their name, image or likeness. It’s intended to align with planned moves by the NCAA to allow for student-athlete compensation.

The bill also requires that the Legislative Committee on Education conduct an interim study concerning the issue.

This measure, sponsored by Assemblywoman Natha Anderson (D-Sparks), requires Nevada students to learn about the history and cultural contributions of minorities and historically underrepresented and discriminated against groups, including Native Americans, members of the LGBTQ community and African Americans. It would also require that textbooks and instructional materials accurately portray the history and contributions of marginalized groups.

The bill passed on party-line votes in the Senate and Assembly, with Republicans in opposition.

This bill expands the duties of the Investigation Division of the Department of Public Safety to include assisting in investigations related to cannabis that the Department of Taxation or the Cannabis Compliance Board might be undertaking, if those agencies request the help.

The bill passed unanimously in both houses.

This bill expands the work of the Office of Science, Innovation and Technology, calling on the agency to develop a statewide system to determine the extent to which students have access to the internet and computers in their homes. It also tasks the office with helping connect students to that technology.

The bill passed unanimously in the Senate and on a 35-4 vote in the Assembly, with some Republicans opposed.

AB227: Cracking down on independent contracting in construction

This bill bars contractors from hiring people who don’t have a contractor’s license and are not their direct employees to do work for a contractor that requires a contractor’s license. Backed by Assemblywoman Maggie Carlton (D-Las Vegas), the bill is one strategy to tackle the issue of employee misclassification but was opposed by all Republicans.

The bill passed on party-line votes in both houses.

This bill requires that employers who offer sick leave to their workers also let those employees use that accrued time to attend to medical needs of their immediate family, whether that be for an illness, injury or doctor’s appointment. It allows employers, however, to limit the amount of sick leave a worker can use for that purpose.

The bill, sponsored by the Assembly Commerce and Labor Committee, includes a preamble stating that caregivers in Nevada provided 324 million hours of uncompensated care in 2013, at an estimated value of $4.27 billion.

The measure passed unanimously in the Senate and on a 30-12 vote in the Assembly; all who voted against it are Republicans.

This bill, sponsored by Assembly Speaker Jason Frierson (D-Las Vegas), raises the prerequisites for serving as attorney general. It requires the person in that role to be at least 30 years old — up from the current minimum age of 25 — and have lived in Nevada for at least three years, up from two.

The person must also be a member in good standing of the Nevada Bar.

Frierson said that the duties of the office have become increasingly complex over the years, and Nevada’s minimum qualifications have not kept up with the prerequisites common in other states. Opponents said other constitutional offices, such as governor or treasurer, only require the person to be 25 and have no other professional prerequisites.

Sen. Ira Hansen (R-Sparks) also said it gives way too much latitude to the state bar and limits the choices of Nevada voters.

The bill passed 31-11 in the Assembly and 12-8 in the Senate. All those who voted against it were Republicans.

The bill authorizes the Regional Transportation Commission in Clark County to offer microtransit services, or transportation by a multi-passenger vehicle that carries fewer passengers than vehicles used on regular routes and is dispatched through a digital application service.

The measure passed unanimously out of the Senate and on a 36-5 vote in the Assembly.

This bill requires health care providers to report cases or suspected cases of attempted suicide to the state, with that information reported annually to the Patient Protection Commission. It also calls for an evaluation by the state Insurance Commissioner on whether insurers are adhering to a federal law requiring mental health parity — not limiting mental health benefits more than physical health benefits.

The measure passed 26-16 in the Assembly and 14-6 in the Senate. Those opposed were Republicans.