35 years after deadline, both houses of the Nevada Legislature vote to ratify Equal Rights Amendment 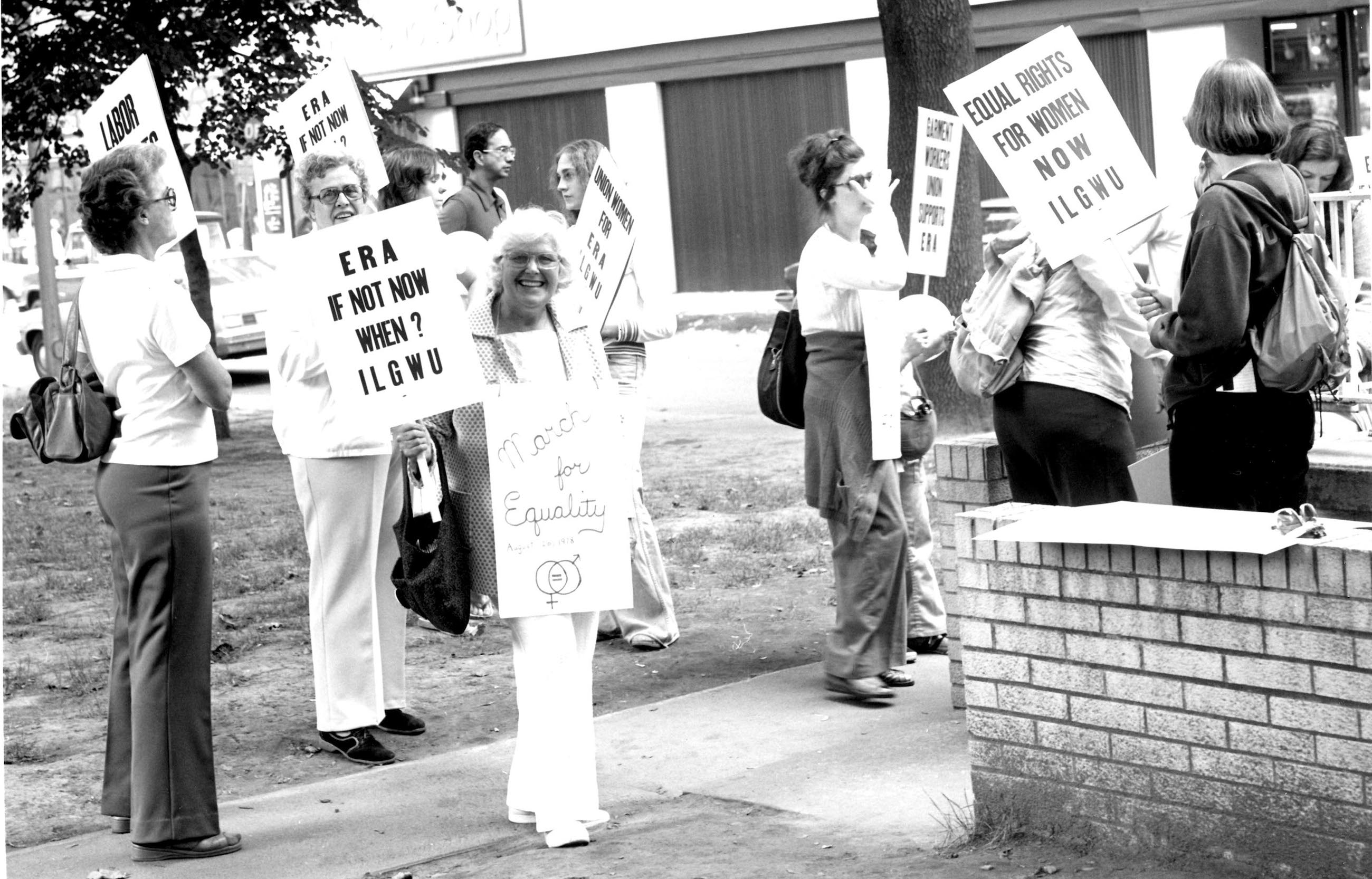 Both houses of the Legislature have voted to ratify the Equal Rights Amendment Monday, 45 years after Congress first passed the measure, 35 years after the deadline to do so and after repeatedly being rejected by lawmakers and voters in the 1970s.

The Assembly voted 28-14, with Democrats joined by Republican Assemblywoman Jill Tolles, on Monday to approve the ERA, the last significant hurdle the measure needed to clear. It must still return to the Senate, which passed the measure 13-8 earlier this month, for concurrence on a technical amendment that makes changes to how the measure is transmitted to the appropriate parties and cosponsors on the bill and final passage.

In an emotional floor speech, Tolles confessed that she hesitated on her vote and emphasized that she is a conservative committed to fighting for the rights of unborn children. She also acknowledged that ratifying the amendment is "purely symbolic" but noted that the Assembly chamber is "full of symbolism," pointing to her wedding ring, the state seal and the daily pledge of allegiance to the flag.

"We stand underneath a seal that reminds us that we are a battle born state and that home means Nevada," Tolles said.

Republican Sen. Heidi Gansert supported ratification during the Senate vote, and Republican Gov. Brian Sandoval said earlier this month that he supports the measure, though his support is not required for ratification.

The vote is viewed as largely symbolic, since the deadline to ratify the amendment passed in 1982. Still, ERA proponents remain hopeful that the amendment could be resurrected, pointing to a U.S. Supreme Court decision that indicated that Congress has the authority to determine if an amendment is valid if ratifications are made within a reasonable period of time after the deadline.

The vote on SJR2 came after nearly an hour of passionate floor speeches in which Democratic Sen. Nicole Cannizzaro talked about the struggles her grandmother faced being discriminated against as a young woman and Republican Sen. Becky Harris tearfully worked her way through her opposition to the resolution. Republican senators by and large echoed the concerns brought up during a committee hearing last week about how the amendment would require women to register for the draft, codify taxpayer-funded abortions and destabilize the family unit, while Democrats stressed the importance of passing the symbolic measure in ensuring equality for women under every area of the law.

Harris urged her fellow senators to “not be weighed down in symbolism” and suggested that Nevada could adopt its own Equal Rights Amendment instead of the one proposed by Congress 45 years ago.

“My question before you today is where is Nevada in this conversation?” Harris said. “We don’t have an equal rights amendment in our constitution.”

It’s been 45 years since Congress passed the Equal Rights Amendment, but with the green “ERA YES” stickers, suffragette sashes and a bonnet or two it was as if one of the Senate committee rooms on Monday had been transported to a different era.

There were the anachronisms: computers in the hearing room, mentions of Facebook in testimony and pink “pussy hats,” which debuted at the Women’s March on Washington last month. But by and large Monday was a throwback to 1972 when the amendment was passed by Congress amid the heydey of the feminist movement.

Women — and some men — packed the committee hearing room in Carson City to testify before the Senate Legislative Operations and Elections Committee on SJR2, which would ratify the Equal Rights Amendment 35 years after the congressionally approved ratification deadline in 1982. The proposed constitutional amendment fell three states short of the 38 needed to win ratification.

A similar resolution was put forward last session but never made it out of committee. Now, Senate Democrats are bringing it back before a Legislature they control and where they only need simple majorities in both houses to pass the resolution.

To many supporters, passing the bill would be a symbolic gesture showing Nevada’s support for gender equality. But others are hopeful that the ERA could be resurrected by Congress, pointing to a U.S. Supreme Court decision indicating that Congress has the authority to determine an amendment is valid if ratifications are made within a reasonable period of time, even after the deadline.

To those who say it’s too late, “I would respectfully disagree and argue the opposite,” said Democratic Sen. Pat Spearman.

“The cry for change today has become a clarion call to act in a responsible manner that ensures equality for all citizens.” Spearman said.

But to opponents, it is as if the fight they fought in the 1970s against ratification never ended. They pointed to the same concerns they had back then that continue today: access to abortion without limits and subject women to the draft and military combat, among other issues.

“The ERA will not help women,” said conservative activist Janine Hansen. “It will take away every advantage they’ve ever had.”

The amendment itself is simple, specifying that “equality of rights under the law shall not be denied or abridged by the United States or by any State on the account of sex,” clarifying that Congress has the power to enforce the amendment through legislation and noting that the amendment will take effect two years after ratification. The resolution itself includes other language detailing why the Legislature believes it is necessary and proper to pass the amendment now.

“The Legislature of the State of Nevada finds that the proposed amendment is meaningful and needed as part of the Constitution of the United States and that the present political, social and economic conditions demonstrate that constitutional equality for women and men continues to be a timely issue in the United States,” the resolution states.

But Nevada is trying one more time. Scores of women turned out to testify in favor of the amendment on Monday, including many women who were present for those discussions in the 1970s when the Legislature first considered it.

Activist Terri Robertson choked up as she recalled working to pass the amendment in the 1970s. “They worked endlessly in support of this wonderful amendment that would be so great for all the women in our country,” Robertson said.

Sen. Sue Wagner brought the amendment back in 1981, but Sen. Floyd Lamb introduced it and moved it to no further consideration.

“In a simple voice vote it was over,” said Helen Foley, a former assemblywoman and senator, during the hearing.

Proponents of the bill easily laughed off some of the arguments from opponents having to do with Sharia law, pedophiles and an American woman who married the Eiffel Tower.

But among those who oppose the amendment, there remains a concern that passing it would essentially enshrine a right to abortion in the Constitution. Organizations opposed to abortions argue that the language in the amendment would nullify any law that distinguishes between abortions and other medical procedures and allow the unfettered follow of taxpayer dollars to clinics that offer abortions.

“So what is the purpose of today’s exercise? … Unfettered, unregulated abortions through all nine months of pregnancy at taxpayer expense? Sadly, yes,” said Melissa Clement, president of Nevada Right to Life.

Several opponents of the amendment were also concerned that the amendment would require women to sign up for the draft and sending them to the front lines of war, another longstanding argument against the ERA. John Wagner, chair of the Independent American Party of Nevada, testified that he was worried that women would be captured, raped and tortured.

But for supporters of the amendment, it felt as if opponents were simply rehashing the old arguments of decades past. It comes down to pure and simple whether women should have the same rights as men, they said.

“This is some 1770-ish movie that I’m watching here listening to some of the people,” said Democratic Sen. Kelvin Atkinson. “This is 2017, and women deserve the same rights.”

The committee did not take any immediate action on the bill on Monday evening.

Photo courtesy of the Kheel Center under Creative Commons.