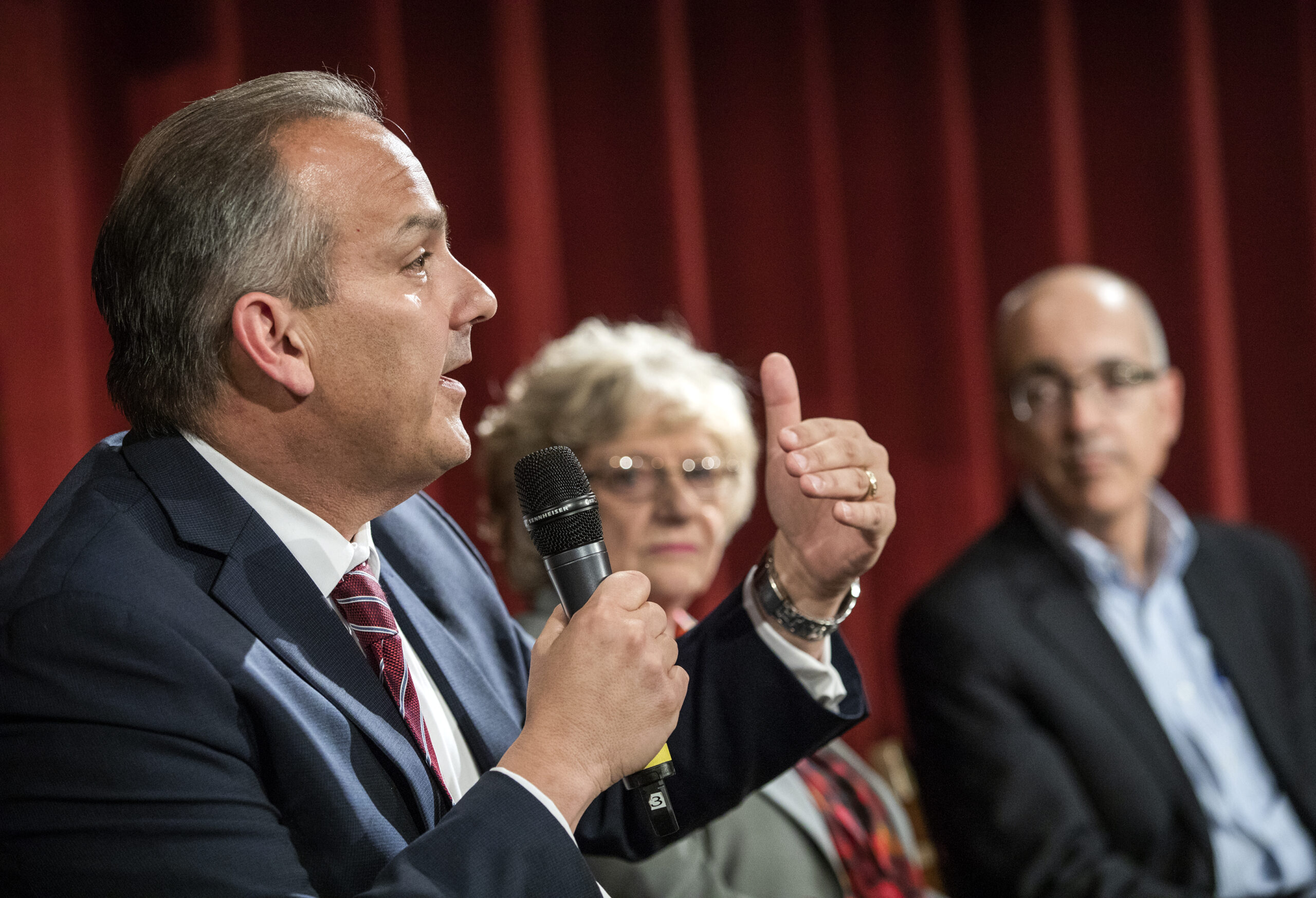 An education town hall Wednesday night drew emotional commentary about the Clark County School District’s decision to eliminate 170 dean positions, triggering an apology from Superintendent Jesus Jara for how his decision was announced.

The district’s leader said the decision was “carefully and strategically” made after the legislative session ended without enough money to support operational needs and employee pay raises, thereby creating a $17 million deficit for the upcoming school year. Jara announced via a video message on Monday that dean positions at middle and high schools would be eliminated, and those employees would be moved back to teaching jobs.

He acknowledged the decision could have been communicated better.

“I accept the responsibility, and I apologize for the rollout,” Jara said, explaining that he was trying to inform everyone at the same time. “... Obviously, I didn’t get it right.”

The apology came hours after the Clark County Association of School Administrators and Professional-Technical Employees (CCASAPE) held a special meeting, where 72 secondary school principals took a unanimous vote of no confidence in the superintendent. It marked the first no-confidence vote of a superintendent in the union’s history.

CCASAPE President David Wilson, who is principal of Eldorado High School, said the vote boiled down to Jara not consulting principals ahead of time and delivering the news in an “unconscionable manner.”

“We would like to explore other options of finding that money so we can restore these positions that are critical to our schools,” Wilson said.

A conversation about the superintendent’s controversial decision kicked off a town hall hosted by journalist Carrie Kaufman in association with the UNLV College of Education. The event brought together state lawmakers, union leaders, education advocates and the superintendent — not to mention a packed auditorium inside UNLV’s Greenspun Hall — for a post-legislative session discussion.

Jara explained his reasoning for the change, saying most large districts don’t have the dean position and he wants Clark County to tackle discipline and behavior issues differently going forward. Last year, the school district embarked on a new initiative called the Clark County School Justice Partnership, which aims to keep students in school by helping them learn from their mistakes and take responsibility for their actions.

“We have to think about changing our discipline mindset instead of sending them home,” he said.

Although the Clark County Education Association, which represents 10,000-some teachers, has supported the decision, Jara’s response did not satisfy Stephen Augspurger, the executive director of the administrators’ union. Deans handle a variety of tasks, including student discipline and attendance, bullying investigations, campus safety issues, teacher supervision and athletic event supervision. Their absence from secondary campuses, he said, will put students in harm’s way and cause a ripple-effect throughout the building.

“There is no question that things are going to be different in classrooms next year,” he said.

Speaking to reporters after the town hall, Jara said he was disappointed about the no-confidence vote because he had met with Augspurger earlier Wednesday afternoon.

“I felt that we had a good meeting about the decision,” he said.

Jara said he will recommend cuts to the district’s central office to the School Board of Trustees meeting Thursday. Those budget reductions would be in addition to the dean eliminations as the district tries to shore up its $17 million deficit.

Not surprisingly, education funding dominated much of the town hall discussion. Panelists representing Educate Nevada Now and HOPE for Nevada bemoaned a last-minute amendment to Senate Bill 543 — which overhauls the state’s K-12 funding formula — that stripped the legislation of a provision that would have prevented education money from being supplanted.

Caryne Shea, vice president of HOPE for Nevada, pointed to a room tax increase passed by an initiative petition a decade ago as an example of promised education funding that continually gets diverted to fill other holes in the state budget. She also questioned why lawmakers can’t secure the needed education money despite years of mounting complaints about how Nevada funds schools.

“I’m very tired of having our children used as an ad campaign to raise taxes for education and our children never seeing it,” she said, drawing applause from the audience.

State Sen. Mo Denis, who spearheaded the funding formula overhaul, took issue with her assertion that lawmakers haven’t accomplished enough. He said changing a 52-year-old funding formula is a time-consuming process — and one that began years ago with involvement from various groups across the state.

“Anybody that says they haven’t been part of this, they are wrong,” Denis said.

The longtime state lawmaker said he was pleased to see people angry enough to attend an education town hall because that’s the kind of momentum needed to carry the process through the finish line and reach adequate funding.

“Sometimes it takes a long time to get things done. I wish we could do it quickly,” Denis said. “I used to say I did this for my kids. Now I say I’m doing it for my grandkids. The thing is you can’t give up.”

But Suzy Au, a parent who attended the town hall, said she’s concerned education funding problems are affecting too many generations, while buzzwords, excuses and finger-pointing get in the way of the work that needs to be done.