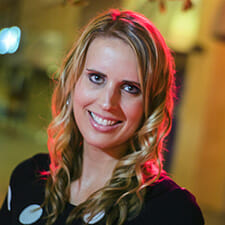 Before joining The Nevada Independent, Jackie spent six years as a reporter for the Las Vegas Sun, where she started as an intern. She covered everything from wildfires and narcotics raids to stadium deals and finding love in Las Vegas. ​Jackie’s work has been recognized at both the local and national level. She was the recipient of the 2014 Dart Award for coverage of trauma and won a 2015 Education Writers Association award for her mental health stories, as well as earning several honors from the Nevada Press Association.

In 2010, Jackie graduated from Kent State University with a bachelor degree in newspaper journalism. She loved the camaraderie of student media and served as editor of the Daily Kent Stater. Her experience in that newsroom led to a 2009 Dow Jones copy editing internship at The Virginian-Pilot and, later, the Las Vegas Sun.

Jackie’s favorite stories capture how events or public policy shape people’s lives. For instance, she followed a Nevada family for a year, chronicling their physical and emotional recovery after a heinous crime. Her reporting culminated in a seven-part series. She also examined shortcomings in how Nevada treats children with mental health problems.

Jackie has lived in northwest Indiana, upstate South Carolina, Cleveland, and Dayton, Ohio. Her parents, twin sister and brother reside in the Dayton-Cincinnati area, so she racks up frequent flyer miles visiting them. She’s also fond of visiting beaches, playing softball, reading magazines and spending time with friends and family — near and far.