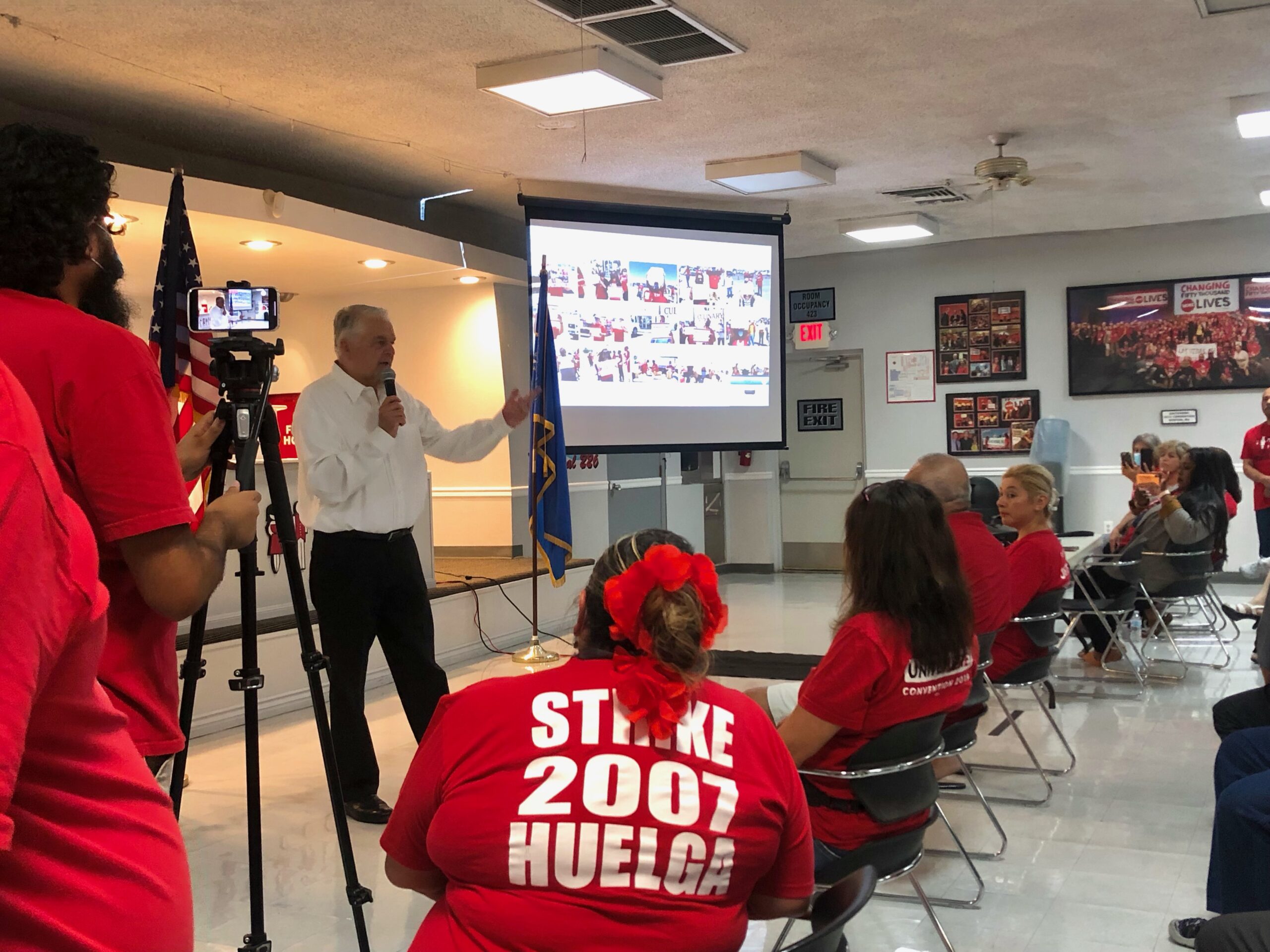 Gov. Steve Sisolak joined members of the Culinary Workers Union in Las Vegas on Tuesday to celebrate the passage of the much-debated SB386 – referred to as the “Right to Return” bill – that guarantees the rights of laid-off gaming and tourism industry workers to return to their previous jobs.

Sisolak was met with applause and cheers after he was introduced by D. Taylor, president of the labor organization’s parent union, UNITE HERE. The event came after Sisolak signed the bill last week with little fanfare.

“The day I decided that we had to close down the Strip … I said ‘I’m going to put a lot of people out of work.’ That was hard. That was really hard. 98 percent of the Culinary members were unemployed after we did that. We only brought back 50 percent of them thus far,” Sisolak told the workers who grew quiet in the crowded union hall near downtown.

Sisolak credited the bill’s passage to the union members who relentlessly lobbied legislators in Carson City and fought to get the measure passed in May. However, he said there was still work to be done as long as there was a single worker there who did not yet have a job back.

Mario Sandoval, 56, is a Las Vegas resident and member of the Culinary Union who was a food server at Binion’s steakhouse for 36 years before he was laid off in March 2020. He is planning to retire in seven years and said he wants to do so with “dignity.”

For 13 months, Sandoval was unemployed. He spoke to lawmakers on the congressional Ways and Means Committee, at the Legislature and even to Vice President Kamala Harris when she came to visit Las Vegas in March.

“Anybody that would give me an ear, I would chew it off,” Sandoval joked.

Sandoval said he feels great that the bill passed, but that he is still not back to work because his company told him that they have until July 1, when the law goes into effect, to rehire him.

Norma Flores worked as a server at the Fiesta Henderson Hotel and Casino for 20 years before it was shut down amid the coronavirus pandemic. Like Sandoval, she knocked on doors and lobbied Nevada legislators to support SB386.

She described the financial and mental toll the pandemic took on her and other workers.

“We feel like we don’t have anything,” she said. ”We lost everything with the pandemic, and we know we have to [go] back to work, but we don’t know when. We go to sleep and we don’t know if … we’ll have [a] check for unemployment [tomorrow]. We don’t want to depend [on] that check. We want to work.”

Luceanne Taufa worked as a cashier at Fiesta Henderson for 17 years before she was laid off in March. After having multiple family members pass away and seeing others lose their livelihoods during the pandemic, she said she felt as if her heart was broken.

Both Flores and Taufa said the passage of the Right to Return bill was a major victory for workers. Taufa described herself as being “in heaven” after she had learned that the measure passed. She said that though she only has a few years of work left, she also fought to give other people hope for the future.

The measure was subject to lengthy negotiations before the union and other major players in the casino industry arrived at a compromise.

“This wasn’t about an argument about a bill … This was about people. This was about people that worked for a living – hard-working people that have built this city. They fueled this tourism economy. Without you, nobody’s coming to Las Vegas,” Sisolak told the workers. “I am committed to doing everything within my power to make sure we get every person back to work because that’s what it’s about.”