Democrats, Republicans split over whether new gun background check bill carries out will of the people 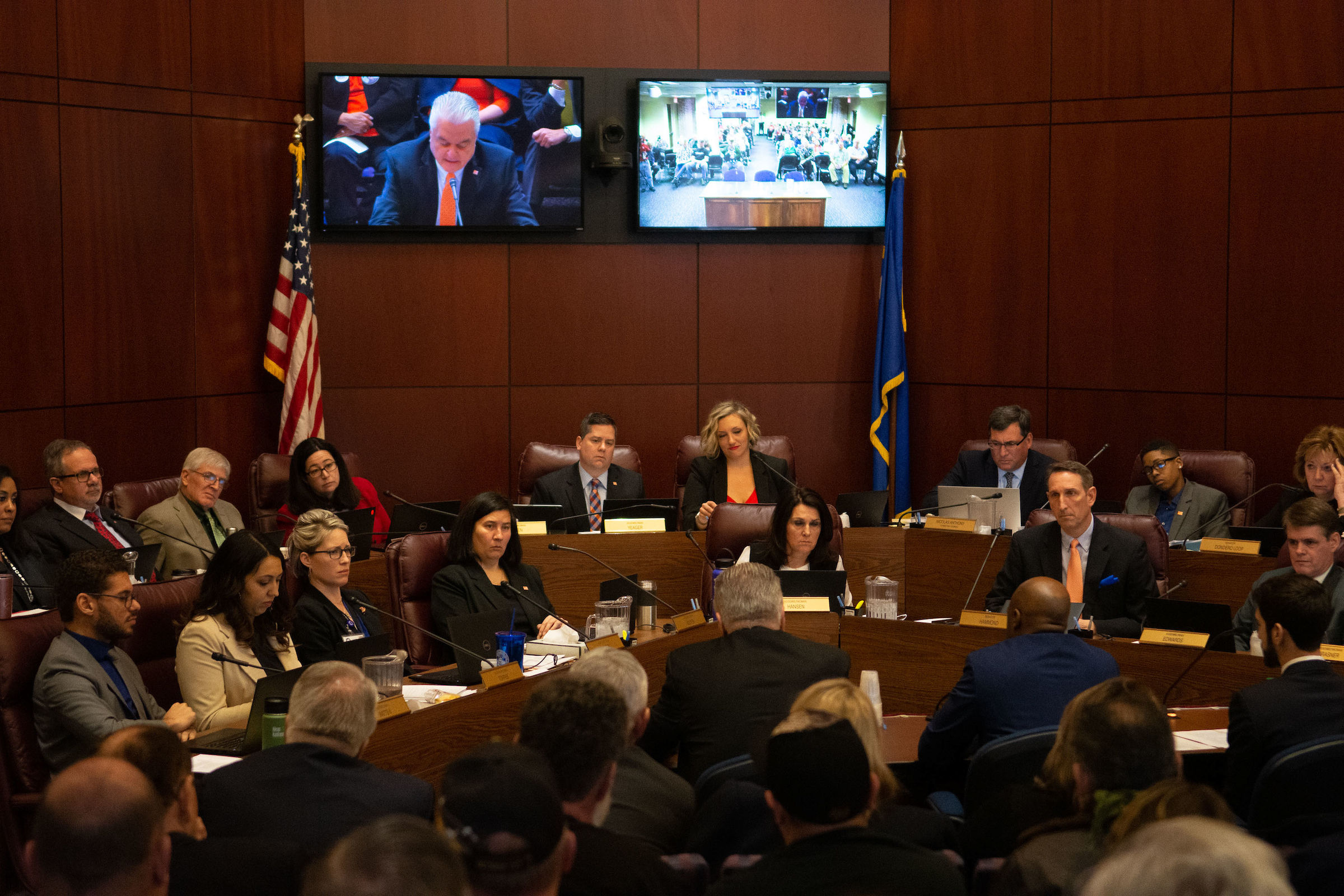 An emotionally charged hearing over a proposal to require background checks on private gun sales and transfers marked the first pitched partisan battle of the 2019 legislative session, with lawmakers split on whether the bill would carry out the will of the voters or create barriers to legal gun ownership.

During more than 90 minutes of at-times heated questioning in a crowded committee room, lawmakers parsed the intricacies of a gun background check bill introduced by Democrats on Monday, including whether the bill’s definition of transfer applies to someone living in a house with a roommate’s unsecured gun to how police would go about enforcing the law. The debate preceded hours of impassioned testimony from supporters and opponents alike, including Democratic Gov. Steve Sisolak, who told lawmakers that he would be proud to sign the bill.

“We stand here today because for too long the will of the voters was ignored,” Sisolak said during the hearing. “That will hopefully change today.”

The measure, which only needs a simple majority of votes to pass, is all but certain to land on Sisolak’s desk given safe Democratic majorities in the Assembly and Senate. Democratic leaders have signaled their desire to time votes on the bill with the Feb. 14 anniversary of last year’s mass shooting at a high school in Parkland, Florida.

The measure was heard by a joint meeting of the Senate and Assembly Judiciary committees on Tuesday, with senators voting out the bill on a party-line vote late Tuesday afternoon. The bill is likely to come up for a full Senate vote on Wednesday, and Assembly Speaker Jason Frierson said in a brief interview that the Assembly will not suspend any rules and proceed normally on the bills; which takes a minimum of three days.

At a press conference on Tuesday afternoon, Sisolak told reporters that he “certainly hoped” that the bill would be signed this week and hinted that issues identified by Republicans would likely not stop him from signing the bill.

“Certainly, I take their questions seriously, but I think that sometimes people are just looking to find faults with the bill,” he said. “I think as a whole, it’s a great piece of legislation. Moving forward, it’s going to improve on the background check situation and in the long run I firmly believe it’s going to save lives.”

Democratic Senate Majority Leader Kelvin Atkinson, who sponsored the bill and presented the legislation during the hearing, repeatedly emphasized that the measure was nearly identical to an initiative approved by voters in 2016 apart from a change requiring the state and not the FBI to conduct the background checks. He highlighted a Las Vegas woman who police said was killed by her ex-boyfriend after he lied about his criminal history and purchased a gun from a private seller in 2016 without going through a background check. Atkinson said his daughter had gone to the same day-care center where the woman was shot.

“We simply cannot allow this to go on anymore,” he said. “We must act.”

But legislative Republicans argued that the change requiring the state to provide the background checks makes it substantively different than the voter-approved measure and identified a slew of additional concerns with the legislation, charging that its definitions were too vague and could result in absurd limits on transferring guns between in-laws or while hunting.

“This is not the same question that was actually on the ballot and was defeated in the bulk of the state of Nevada, with the exception of Clark County,” Sen. Ira Hansen said.

The legislation is the latest in a seven-year push from gun control advocates to apply “universal” background checks on private party gun sales and transfers, with exceptions for direct family members, law enforcement, antique firearms and while hunting or trapping. A similar bill proposed by former state Sen. Justin Jones was vetoed by Republican Gov. Brian Sandoval in 2013; the measure then qualified for the 2016 ballot and was narrowly approved by a 0.9 percentage point margin but has languished as the FBI has refused to conduct the checks.

Several Republicans chafed at the suggestion from the attorney for the national gun-safety group Everytown For Gun Safety, who provided most of the technical testimony on the bill, that there might be ways to circumvent the familial transfer provisions of the law. The attorney, William Rosen, told Assemblywoman Jill Tolles that while her sister-in-law could not directly transfer her a gun, she could give it to her husband who then could legally transfer it to Tolles as his spouse.

“Isn’t there language we can find that will actually address these issues?” Sen. Keith Pickard said. “Or are you saying that’s impossible, and we’re just going to go with this and invite circumvention of the intent? I find that troubling.”

Though proponents pointed to studies showing that background check laws reduce gun violence deaths, Republicans argued that the legislation wouldn’t do anything to actually prevent crime.

“Laws like this, frankly, only apply to people who are law-abiding,” Hansen said.

Assemblywoman Sandra Jauregui, who survived the Route 91 Harvest Festival on Oct. 1, 2017, acknowledged in testimony that the pending legislation would not have prevented the 58 deaths that night. But she said that she was testifying in solidarity with survivors of gun violence.

“I can still vividly remember the events of that night, hitting the ground and having my husband crawl on top of me to shield me from the raining bullets,” Jauregui said. “It took me nearly eight months after the event to stop clearly hearing the bullets that were raining on that night.”

"Expanded background checks would not have stopped 1 October,” she added. “But it does not mean we should throw up our hands and let this be the world we live in.”

Others also shared personal experiences. At a press conference supporting the bill, Clark County School District Trustee Linda Cavazos said her younger brother, Louie, committed suicide at the age of 26 and suggested that a background check could have prevented the shooting.

“The gun he used did not belong to him, and I can tell you right now that he would have not passed a gun background check,” she said through tears. “It’s even very hard after all these years to say these words. One shot to the head and my younger brother, the youngest of six children was gone.”

During the hearing, Republican Assemblyman Chris Edwards raised concerns that active duty military and reserve members who own firearms could quickly run into problems if they are deployed and forced to leave their weapons with a roommate or fiance, which could run afoul of the law’s prohibition on transferring firearms without a background check.

“This is not just a hypothetical,” he said. “This is something that goes on every day. How do I protect my people? The only way we can do that is if we amend this bill and get it right.”

In testimony, opponents argued that the legislation wouldn’t reduce crime, said that it would limit gun access due to the costs associated with dealers running gun background checks and expressed concern that it would lead to the registration or eventual confiscation of guns. Dan Reid, a lobbyist for the National Rifle Association, said the bill would unequally treat concealed carry weapon permit holders — who aren’t required to get a background check if they purchase a firearm from a licensed dealer as long as their permit was issued after 2011 — by requiring them to undergo background checks for any private sales or transfers regardless of status.

Storey County Sheriff Gerald Antinoro told lawmakers that their efforts would be better suited to addressing mental health funding and other issues and suggested that recent mass shootings wouldn’t have been stopped even with “universal” checks in place.

“Why don’t we look at the real problems and not just do something knee-jerk that’s going to have little effect?” he said.

A fiscal note submitted by the Department of Public Safety on Tuesday said the bill would have “no fiscal impact” to the state as long as the volume of voluntary private party background checks stays consistent. It noted that voluntary checks performed by the department for private-party sales or transfers totaled only 215 since December 2017, or about 0.2 percent of all background checks processed by the department over that time.

Attorney General Aaron Ford, who also testified in support of the measure Tuesday, told reporters that his office was working on a settlement with plaintiffs on a lawsuit filed in 2017 seeking to compel the state to implement the ballot question. The two parties submitted a joint request to delay scheduled proceedings on the case, which was appealed to the Nevada Supreme Court, citing potential legislative action and discussions about a settlement that could prove “fruitful.”

“What’s important to note is that this administration, as opposed to the last administration, believes that the background check initiative is in fact enforceable,” Ford said. “And so what we’re looking to is to work with the plaintiffs in the lawsuit to see the best way forward in order to make that happen.”

Updated 2-12-19 at 2:08 p.m. to include additional comments from supporters and opponents of the legislation, as well as Gov. Steve Sisolak and Attorney General Aaron Ford. Updated again at 5:33 p.m. to reflect that the bill has passed out of committee.