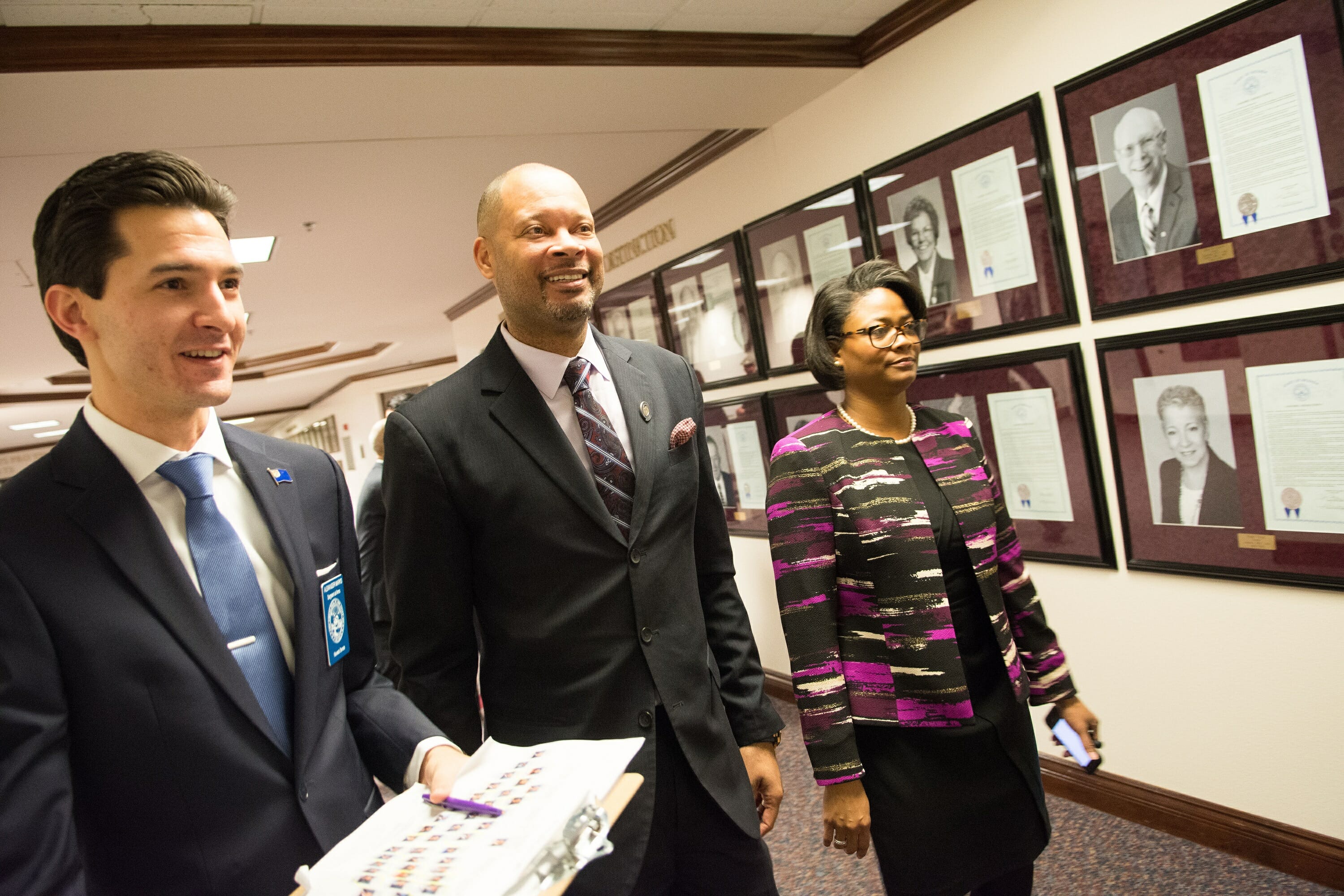 In his first speech as majority leader, state Sen. Aaron Ford said lawmakers had a “mandate” from voters to enact progressive policies including a guaranteed minimum wage increase and promised to roll back some Republican accomplishments from the 2015 session.

In a speech delivered Monday to the entire Senate, the new Democratic leader  outlined a number of priorities that he said voters expected Democrats to push through including policies improving public education, enacting an overhaul of the criminal justice system, earned sick leave for workers, an equal pay bill “with teeth” and promising to pass a minimum wage increase over the 120-day session.

“Our Nevada Blueprint will serve as the lenses through which we will analyze all legislation proposed in this Chamber,” he said, referring to the Senate Democrat’s list of policy priorities. “It’s the mandate we have in view of Nevada electing Democratic chambers in the Legislature.”

Ford also called for Democrats to take on the “extreme and unnecessary legislation” passed by Republican majorities in the 2015 legislative session that he said rolled back project-labor agreements and put limits on collective bargaining rights. Democrats have a 12-9 majority in the state Senate, with Independent Sen. Patricia Farley caucusing with the Democrats.

Despite the rhetoric, Ford and Roberson were at odds almost immediately after the speech, with Republicans opposing modified Senate rules that included provisions not allowing the state's lieutenant governor, Republican Mark Hutchison, to cast tie-breaking votes on bills and joint resolutions. The rules were approved on a voice vote.

Republicans made the change in the 2015 session, but Democrats said the new rules reflected the rules from earlier sessions.

Take a look around. Look to your left. Your right.  Look at the Senators right in front or behind you. This is Nevada. This is America.

Democrats. Republicans. An Independent. African Americans. Latinos. Caucasians. Men. Women. And members of the LGBT community. But our diversity doesn’t stop there. This Chamber, as well as the Assembly, represents religious diversity. It represents geographic diversity, with Members from Northern Nevada. From Southern Nevada. From Rural Nevada, and from Urban Nevada. We have civil servants. And thankfully, we have Veterans. Again, we are Nevada. We are America.

I mention this diversity not simply for the sake of acknowledging it. Although, to be sure, it would be entirely appropriate to commend our constituents on their decision to send this cadre of former candidates – now Senators – to Carson City to consider the best way forward for our State and to ensure equitable opportunities to self-actualize.

No, I mention this diversity to reinforce our responsibility. I mention this diversity to reiterate the “WHY” we’re here. In my view, our responsibility … the reason WHY we are here, is to draw upon our individual and collective experiences to create an environment that helps our constituents realize their potential through academic and economic opportunities, among others.

In my estimation, the best way to fulfill our duty is to enact legislation to help hard-working Nevadans succeed. A corollary to this is also true – we must REMOVE barriers that hinder this ability. While I have not asked him, I suspect that these, too, are parts of the Governor’s conception of what he calls the “New Nevada.” And we agree on this New Nevada. But as I have said before, every new plan needs a Blueprint. And this session, we will implement the Nevada Blueprint.

Last session, the Blueprint represented the Legislative Democrats’ priorities. We painted a picture for Nevadans of what the legislature could be. That it could be a place that focuses on making life easier for hardworking Nevadans, making it easier to start a business, making it easier to raise a family. We showed the voters of this state where we stand, and they voted to enact that Blueprint. Our Nevada Blueprint will serve as the lenses through which we will analyze ALL legislation proposed in this Chamber. It’s the mandate we have in view of Nevada electing Democratic chambers in the Legislature. It is what the voters have asked for. I, for one, look forward to undertaking that analysis.

Speaking of legislation, some of our priorities will be continuing our support for improving PUBLIC education, assisting small businesses in expanding, passing an equal-pay bill with teeth, giving workers earned sick leave on their jobs, college affordability for those what want to, are, or have attended institutions of higher education, expanding vocational and job training opportunities for those who want to go directly into the workforce, and making child care more affordable.

We’re going to focus on criminal justice reform, and on defending our constitutionally-protected rights, all of them, including the right to vote, the right to organize, and the right to be free from discrimination. We’ll focus on protecting our seniors to ensure that they retire with security.

We’ll take another look at last session’s extreme and unnecessary legislation that targeted the pocketbooks of working men and women by slashing wages for construction workers, limiting project-labor agreements, and attacking collective bargaining rights. To our friends in the labor movement, we heard you when you said, “Never Again,” and we agree.

And we’ll focus on our veterans and military families. We can never thank them enough for their service and sacrifice. But the least we can do is remove barriers to their future success.

And, of course, we’ll focus on increasing wages in our State. One of my first jobs was at a Burger King in Dallas, Texas – Oak Cliff to be exact. It earned me a minimum wage of $3.35. Back then, I was a teenager working to buy a pair of Jordans. Now, too many minimum wage workers are trying to raise teenagers named Jordan. That cannot stand. And for that reason, we will pass legislation increasing the minimum wage this session.

Now, obviously, we all won’t, nor do we have to, agree on every piece of legislation emanating from this Chamber. We all know that that’s impossible. And that’s partially why we have decorum provisions in our Senate Rules – provisions with remedies that will be enforced when breaches occur.

This session, we will consider differences of opinion without prematurely quashing debate. And when we disagree, we will do so without being disagreeable. We will converse. But will not be combative. We will discuss and debate. But will not destroy one another, and we will not demean this institution. As my mother often reminded me as a child (and even as an adult) – sometimes it’s not what you say, but how you say it. I look forward to hearing what you have to say and, of course, saying my own piece.

And I’m looking forward to working with you, Mr. Minority Leader. Some pundits and commentators don’t give us much of a chance of getting along this session. Some even quote movie titles in describing the expected end results this session, saying: “There will be blood.” Let’s prove them wrong and show Nevadans that we can work together.

In fact, Mr. Minority Leader, I’m going to share with the rest of the Body a conversation we had last session. As everyone knows, last session, I served as Minority Leader of the State Senate. I used to jokingly say that I preferred to go by “Democratic Leader” because I’d been called “minority” my whole life. My colleague from District 20 served as Majority Leader. And I remember vividly walking downstairs to his office at the beginning of last session and telling him that, although I was the Democratic Leader, he, was the Majority Leader, and that, in that role, he was the Leader of all of us. I told him: “As you go, so do we. As you lead, we learn.”

I take that to heart. I meant it when it applied to him, and I mean it now that it applies to me. While I am a Democrat, and I will most certainly support Democratic priorities and work to implement the Nevada Blueprint, I view my role as Majority Leader much broader.

In the spirit of Senator Debbie Smith, whom we miss dearly, I commit to you to practice what I preach. To not just talk the talk, but to walk the walk. To be sure, I view my role as an opportunity speak truth to power from my position of power. And I won’t refrain from that. But I realize that no one has a monopoly on good ideas, just like no one has a monopoly on bad ones. So, my door will always be open. I will not only hear you, I’ll listen to you. And in the end, when we sine die, my hope is that all of my Senate colleagues feel empowered and effective and that our State is in a better position partially because of your efforts.

With that, I’ll tender the microphone, Mr. President.