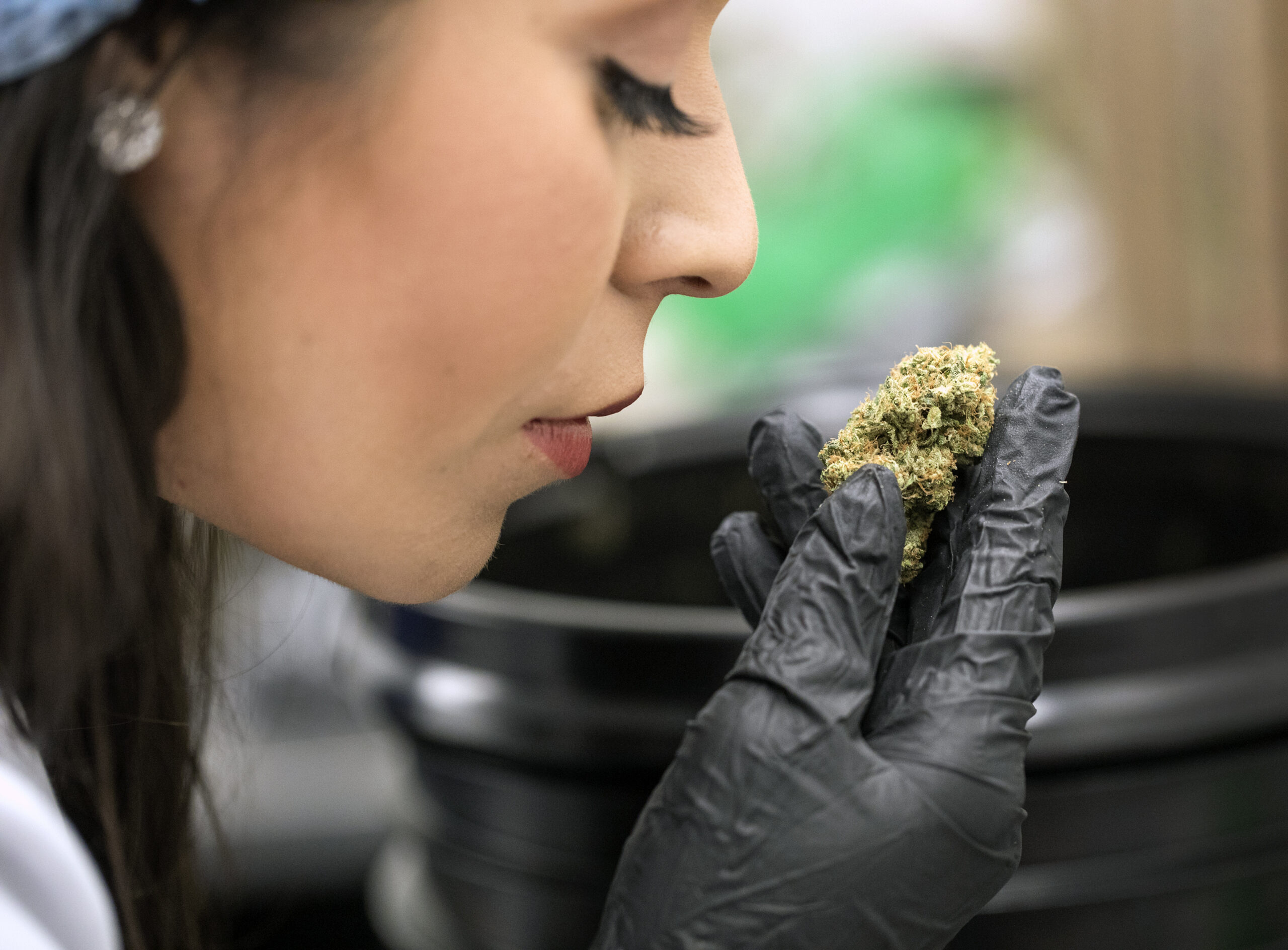 A few years ago, marijuana businesses were wondering if they would even survive the legislative session without some sort of political crackdown.

These days, the industry in Nevada faces some steep challenges, including the lack of banking services and some serious questions — raised in numerous lawsuits — that the state’s process for distributing conditional licenses was unfair. But there are no existential threats in 2019 from lawmakers, who have baked the proceeds of marijuana taxes into their budgets and rolled out a bounty of other bills seeking to help the industry.

“Marijuana used to be heroin in Nevada back in 2013. It was very difficult to talk to any elected official about the issue,” said Will Adler, a lobbyist who has represented marijuana clients. “It's no longer a question of is marijuana in Nevada? It is. The question is how do we use the tax dollars that come in and how do we regulate to make sure it stays the best in the nation.”

This session, bills emerged to send proceeds to an education account, authorize limited-purpose banks to handle the marijuana industry’s finances and ease the path forward for consumption lounges. But chief among the nearly 20 cannabis-related bills introduced this session is a forthcoming measure from Gov. Steve Sisolak’s office creating a Cannabis Compliance Board — an agency modeled after Nevada’s “gold standard” gambling regulatory scheme.

Industry representatives are anxious to learn how stringent the system will be in the bill, which has yet to be introduced with less than a month left in the session. Once the Cannabis Compliance Board is in place, it may be less common to see so many divergent pieces of marijuana legislation.

Democratic Senate Majority Leader Nicole Cannizzaro said the Legislature is trying to work with Sisolak to create a solid regulatory scheme so the Legislature will “not have 10 different bills every session that are seeking to do 10 different things as we start to learn more information,” she said. “It’s not an effective way to regulate or legislate that issue.”

In the meantime, a long list of bills aimed at shaping the direction of one of the state’s newest industries has been whittled to proposals addressing a few key issues affecting the industry. Here’s what is still alive and moving forward:

This bill is still in the works and has yet to be introduced. But state leaders have offered the outlines of their project.

At a budget committee meeting last month, Sisolak’s chief counsel J. Brin Gibson described the proposed agency as one with divisions and chiefs similar to the Gaming Control Board. That agency has administrative, audit, enforcement, investigations, tax and licensing and technology divisions.

The budget called for eight new full-time positions and five governor-appointed, part-time board members who are paid salaries ranging from $40,000 to $46,000. Because Nevada’s voter-approved recreational marijuana initiative cannot be altered until three years after it was passed, the board would be officially established in November 2019, with some staff hired beforehand to ensure a smoother transition.

Lawmakers were still skeptical about why the agency needed to be a standalone entity, rather than a division within the Department of Taxation, which currently regulates marijuana. Taxation chief Melanie Young noted that once the agency took up the mantle of regulating marijuana in 2017, the task has dominated the workload and prevented it from moving forward on improving processes for collecting the $7 billion in other taxes they collect.

AB164 would ease up requirements on advertising. As it stands now, marijuana businesses have to seek pre-approval from the Department of Taxation before putting out an advertisement. The department screens the proposal to ensure it does not run afoul of rules prohibiting child-friendly packaging, images of actual consumption or anything encouraging overconsumption.

“Marketing has to be fluid, especially in the age of social media,” she said.

Under the bill, violations of the advertising law carries a fine of $1,250 for the first offense to $10,000 for a fourth offense in the preceding two years.

Banking services remain elusive because marijuana is illegal on the federal level, and federal agencies are intimately involved in the banking industry. Lawmakers made several proposals this session to try to solve the conundrum of the cash-intensive cannabis industry.

AB466 directs the treasurer’s office to launch a pilot program adopting a “closed loop” system in which cash could be turned into electronic currency and used within the marijuana industry, without touching the rest of the banking system and potentially triggering a federal crackdown.

Durrett said there still needs to be action in Congress to address the complications of banking in the marijuana industry.

“I think the pilot program at the treasurer’s office doing this could be positive, could go well, but it has to be done at the federal level,” she said.

“We could create a bank but it’s just a vault until you have the ability to actually do wire transfers and write checks,” he said. “I think everyone is anxious that maybe if the federal government just limited the Controlled Substances Act and just carved out state-legal marijuana, that would solve all the banking issues tomorrow.”

Democratic Attorney General Aaron Ford announced Wednesday that he had joined 37 other attorneys general in signing onto a letter encouraging Congress to pass the SAFE Banking Act. Nevada’s three Democratic House members are co-sponsoring the bill.

“As one of 33 states that has legalized the use of marijuana, this legislation would enable law enforcement, tax agencies and regulators to more effectively monitor local marijuana businesses and their transactions,” Ford said in a statement.

ACR7 proposes an interim study on issues related to driving under the influence of marijuana. The study scope would include scientific evidence about marijuana-related impairment as well as data about the number of arrests and convictions for marijuana DUIs before and after Nevada legalized recreational marijuana.

It would also explore how other states are handling marijuana-related DUIs and consider products that measure marijuana intoxication. The goal is to come up with recommendations that could inform the Legislature in 2021.

Yeager said that while much of the U.S. agrees that 0.8 is the blood alcohol concentration at which most people are intoxicated, there has not been enough research to come up with an analogous metric for marijuana.

SB32 makes certain information about marijuana licensing applicants public information. That includes the name of any owner, officer or board member of a company applying for a license, the scoring tool used by an evaluator, the methodology the department uses to rank applications, the final ranking and score of the applicant.

Previously, the department revealed next to nothing about applicants, including those who won conditional licenses in a December licensing round. Numerous applicants who did not win licenses have sued the department, saying its opacity could leave room for corruption.

Young noted that the Department of Taxation is bound by taxpayer privacy laws that limit their disclosure. That will be improved by the passage of SB32, which increases the amount of information that can be released — including the names of applicants — and is expected to be signed any day now.

Democratic Sen. Yvanna Cancela, the bill sponsor, said marijuana businesses are also struggling with unauthorized sellers using their logos and branding. There’s not clear recourse for those kinds of violations.

The bill authorizes the attorney general to conduct a study into the unlicensed marijuana industry, including what resources are available to combat the unlicensed sale of marijuana products and gaps in enforcement.

Closing disparities in the marijuana industry

Sponsored by Democratic Sen. Dallas Harris, SB346 requires the Nevada Department of Taxation to gather comprehensive demographic data about players within the marijuana industry and analyze the data to determine whether discrimination and disparities exist.

“The idea here is to get the lay of the land,” Harris said at a bill hearing. “In order to determine whether there is fairness in how these establishments are being set up, how licenses are being handed out, employment information — we’ve got to gather that information.”

The bill also calls for a Center for Emerging Small Marijuana Business Advocacy and Services within the Governor’s Office of Economic Development. The center would help businesses get information about financing and assist with inquiries from the businesses.

“The current market is not as diverse as we might hope it is,” she said. “So I really would like to start to address that.”

If approved, SB430 would add certain medical conditions to the list of conditions under which a patient is allowed to obtain a medical marijuana card. Medical conditions in the bill include anxiety disorders, autism spectrum disorders, an autoimmune disease, anorexia, opioid dependence or addiction, a neuropathic condition or any condition related to the human immunodeficiency virus. The bill also lowers the threshold from “severe nausea” to just “nausea.”

While Nevada allows all adults to buy marijuana, proponents say it’s important to expand the medical eligibility to show producers that there’s a market for medical products and because the cards allow patients — who tend to consume more than recreational customers — exemptions from certain taxes.

Democratic Assemblyman William McCurdy’s AB192 establishes a procedure for sealing records when an offense has been decriminalized. It comes after a similar bill from McCurdy that was focused on vacating and sealing minor marijuana convictions was vetoed in 2017 by Gov. Brian Sandoval.

While the bill still requires the person to take proactive steps to clear their record rather than call for the wholesale expungement of records for decriminalized offenses, McCurdy said he’s happy with how far the bill goes because it covers future offenses that might be taken off the books — not just low-level marijuana possession.

“I believe in other sessions to come there will still be more work that needs to be done,” McCurdy said, “but I believe in whole that we’re taking positive steps in the right direction to right a lot of wrongs and provide a lot more opportunities for those who wish to participate in this industry to be able to do so.”

What didn’t make it

AB409, which would have authorized local governments to create and issue licenses for marijuana consumption lounges, is dead.

This bill was aimed at ensuring a more diverse group of entrepreneurs could participate in the marijuana consumption lounge industry, according to bill sponsor McCurdy, but it was never scheduled for a hearing.

A legal opinion from the Legislative Counsel Bureau has said there’s nothing preventing local jurisdictions from regulating marijuana consumption lounges, and the city of Las Vegas has approved allowing licensed marijuana businesses to open consumption lounges within city limits.

SB305 also never received a hearing. This bill would have specified that 75 percent of marijuana excise tax revenue goes to the state’s Rainy Day Fund, but 25 percent goes to a new Account for the Support of Academic Achievement that would support public schools and scholarship programs.

Sisolak’s budget lays out other plans, though. He calls for marijuana tax revenue to support school safety initiatives, including social workers and infrastructure improvements.

And SB437 will not move forward. The bill would have allowed for the creation of charter banks and credit unions limited to serving marijuana businesses. The financial institutions could issue special checks that could be used for paying taxes and operational expenses for their business, as well as purchasing bonds from the state.

Sponsored by the Senate Judiciary Committee, the bill never got a hearing.