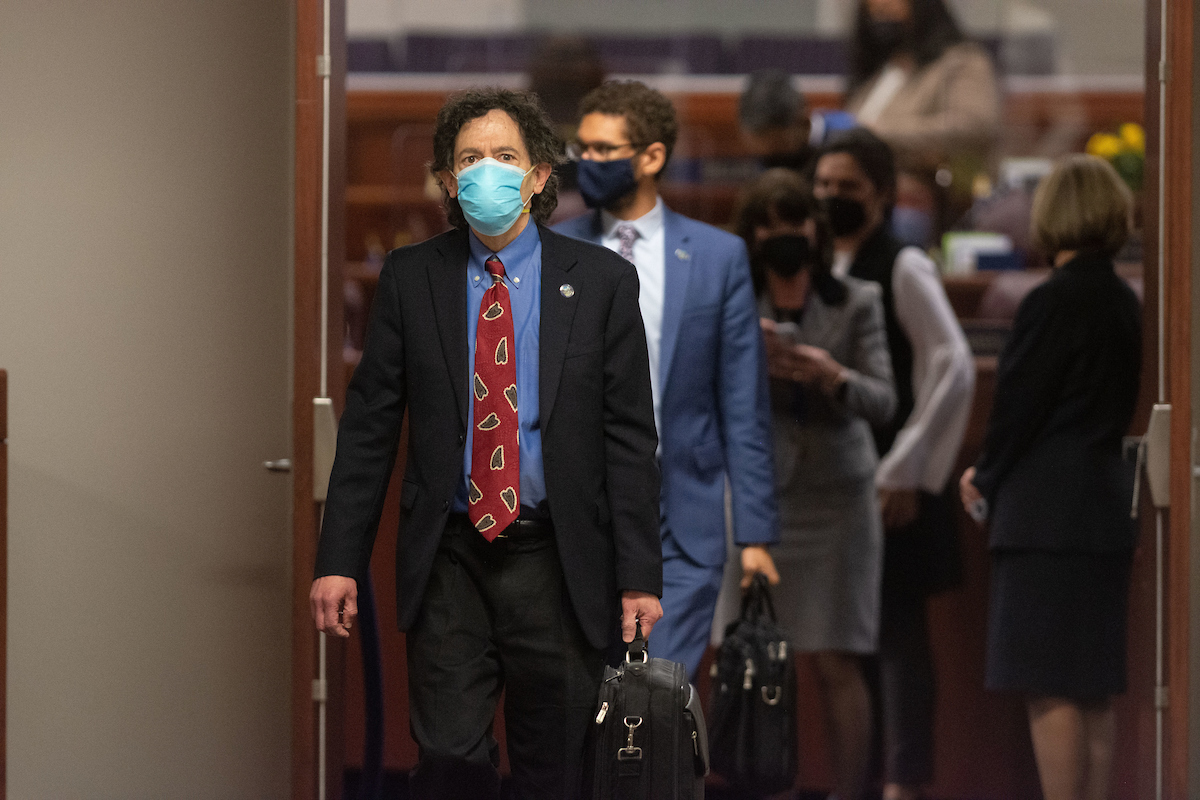 As in sessions past, The Nevada Independent is publishing a series of profiles featuring new lawmakers in the state. This is the fourteenth installment.

Orentlicher is a professor at UNLV’s Boyd School of Law and director of the school’s health law program.

Orentlicher’s father and twin sister are law professors, and his brother is an art professor. He has one child in college and one who is a junior in high school.

When he’s not working, he enjoys hiking in the national parks in the southwest and Cajun dancing, a hobby he picked up during a federal law clerkship in Louisiana.

Born in Washington, D.C. and raised in Bethesda, Maryland, David Orentlicher grew up surrounded by people doing important work in the government.

It helped shape his view of government as an instrument for great good — a vehicle for ensuring people have housing, a good education and basic needs met, and one with the heft that volunteerism and nonprofits can’t completely replace.

Drawn by the ability to make a difference, Orentlicher started out pursuing a career in medicine, attending Harvard Medical School and then spending several years in internal medicine. It wasn’t long before he had to decide whether he wasn’t enjoying the work because he was exhausted and sleep-deprived, or whether it just wasn’t the right fit.

“I wanted to make sure I gave it a fair chance and so after medical school I started a residency and then I went into private practice,” he said. “Then I could tell medicine is a great career, but it wasn't the right career for David Orentlicher.”

So he went to Harvard Law School and entered the legal profession just as the area of health law was blossoming. It gave him the chance to combine experience he’d gained in medicine with questions of how law and regulations play out; the field has become even more active with the passage of the Affordable Care Act and questions of how to balance the health priorities of COVID mitigation measures with personal and economic interests.

“How do you make sure you address the health needs of the public, and also protect their other interests?” he said. “You’ve got to respect both sides.”

Right out of law school he clerked for a federal judge in Louisiana, where he picked up the hobby of Cajun dancing. He worked at a private law firm and then ended up at the American Medical Association, which helps define the policy positions of the trade association and develop an ethical code for doctors.

He said he’s always been interested in ethical questions, such as how a doctor might make a different decision on whether to resuscitate a patient depending on whether the person in their 80s and has cancer versus if the person is 25 and otherwise healthy.

“That question to me was much more interesting than ‘Should we give him 25 milligrams or 30 milligrams of the diuretic?’’” he said. “That didn't seem as compelling to me.”

The association staked out positions on a wide range of issues, from the HIV epidemic to abortion, organ transplants, end of life concerns and cost containment. One career highlight was when Supreme Court Justice Sandra Day O’Connor held up an AMA brief he had authored and asked the parties what they thought of the AMA’s position.

But eventually, seeing that he couldn’t always be as vigorous an advocate for the trade group’s positions as they might like, he decided it was time to move on.

“Sometimes, there were issues coming up where I could see we just were on ... different pages,” he said. “And it was very hard ... for me to represent a position that I wasn't comfortable with.”

He started teaching at Indiana University, which brought him to the state where he would eventually be a lawmaker for six years. He launched an unsuccessful bid for Congress in Indiana in the 2016 cycle before moving to Nevada, where he is now director of the UNLV Health Law program, and deciding to once again pursue state office.

“It's been 12 years, so I've done some more thinking, and it seemed like a good time to go in and try to implement some of the health policy reforms I've been writing about,” he said.

But he brings with him some wisdom garnered from several terms as a state lawmaker elsewhere, including on the value of compromise.

“You're never going to get 100 percent. And if you try to get 100 percent, you're not going to get anything,” he said. “If you can get 80 percent, that's huge. And the cost of going from zero to 80 is often much less than going from 80 to 100. … You can't compromise your core principles. But you don't have to. Eighty percent gets you your core principles.”

Orentlicher agrees with President Barack Obama that the American health care system under the Affordable Care Act is not the ideal that might have been built if the country could start from scratch.

“We have a system that's broken in many ways,” he said. “The Affordable Care Act did a great job of increasing access, but it did that by putting more people into a broken system, rather than making the fundamental changes we need.”

Among the changes he wants to see is a greater emphasis on public health spending to try to close disparities laid bare in the pandemic.

“If you're going to spend a trillion dollars on health care, you ought to put more than a few percent into public health, because that's where you get the biggest return on your health care dollar is on prevention,” he said. “An ounce of prevention is worth a pound of cure, and we've just never adequately funded our public health system.”

He believes many of the ills in the health sphere are a simple product of poverty.

“If you're wondering how you're going to make people healthier, give them more money,” he said. “If you move from the upper economic parts of the city to the lower, you'll see a drop in life expectancy by a decade or more.”

He thinks former presidential candidate Andrew Yang, who campaigned on the idea of a universal basic income, probably had the best health care plan of all the 2020 candidates.

“He didn't realize it, but he did, because giving everybody a decent income will probably do more for improving public health than anything — than all the investments in MRIs and other fancy technologies will do.”

Orentlicher said he doesn’t want to do anything that would make Nevada’s tax structure more regressive. The state is heavily dependent on the sales tax, and it’s considered regressive because poorer people pay a larger share of their income on it than those who are wealthier.

He says he’ll weigh any tax proposals based on whether they are fair, broad-based and simple.

From his time as a state lawmaker in Indiana, Orentlicher also brings experience overhauling the property tax structure. Just before he was elected there, the state Supreme Court had ordered Indiana to fix its property tax.

Property tax had not been on his radar, but with the order, some homeowners saw their property tax bills triple or quadruple.

Angry constituents protested outside the statehouse and crowded town halls, so much so that Orentlicher asked police to attend in case things got out of hand. Conservatives and liberals alike were upset.

“I also learned, they weren't ready at first for me to respond. They wanted for the first few weeks, first few town halls ... for me to hear them and just listen,” he said.

He hopes Nevada, which has resisted taking steps to adjust its property tax, doesn’t face a similar experience.

While Orentlicher speaks highly of the benefits of expanded voting by mail, he notes there can be trade-offs that make campaigning more challenging, particularly for down-ballot candidates.

“As a candidate, you'd like people to wait until the last minute so they can hear your full message,” he said.

Candidates need to start campaigning earlier to reach voters who start submitting their ballots in October or even earlier. That could have unintended consequences, he said.

Orentlicher is sponsoring legislation on criminal justice reform, including a bill, AB243, that calls for race-blind charging, so prosecutors would not see the defendant’s race or other identifying characteristics before deciding what charges to file.

It would also create an advisory task force on race and policing. The group would draw on the expertise of academics as well as law enforcement to help the Legislature make better decisions about the reforms they want to enact.

It derives from an experience he had in medical school, when a professor was simulating a neurologic response, and the outcome was the opposite of what the class expected.

“One of the earliest lessons I got in medical school — I'll never forget this lesson — was what you think is going to happen in terms of theory doesn't necessarily happen in practice,” he said. “I want to make sure that before I propose a bill or before I vote on a bill, that we've done our research.”