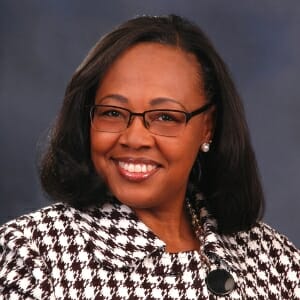 Daniele Monroe-Moreno was born in Tuscon, Arizona and moved to Nevada 22 years ago. She has lived in District 1 almost the entire time she has lived in Nevada. Monroe-Moreno attends Grace Point Church in North Las Vegas. She has three children — Candace, Cassandra and Celena — and two grandchildren. Her hobbies include spoiling her grandchildren, volunteering, cooking and event planning.

ON NEVADA AND THE ISSUES:

Nevada is still that cowboy state, which is really nice. We’re open to things. We’re not a young state, but there’s still so many young ideas that you can do here in Nevada that you might not be able to do in other places. There’s a mindset of people who are willing to take a chance on things. Maybe it’s that gambler’s mentality. That’s one of the things I love about Nevada: You can come here and you can make it. When we moved here from Arizona we moved here because of the job and the opportunity Nevada afforded us. We saw this as a place that we can raise our family and give our family the opportunity to be successful. I don’t think that’s changed.

I think we can improve upon our education system. It’s the basis for so many other things. That’s one of the things I can see improved.

What are your top priorities in the 2017 session?

I think the biggest thing that I would personally like to accomplish — that’s something that resonated at the doors in my community — is that we have a legislative body that works together, that we run under one party or another but when we are serving we serve the people of Nevada no matter what’s behind our name, working together for them. That’s the biggest thing I would like to see come out of the session.

I’ve worked 27 and a half years in law enforcement. There’s a lot of good things and things we can improve upon. We need to make sure our correctional system is a system that helps people correct behavior — something I’m passionate about. One of the reasons behind the Juvenile Justice Bill of Rights I’ve introduced is that kids find themselves in trouble and in the system through no fault of their own. We need to do what we can do once they hit the juvenile justice system to make sure we’re helping them become better citizens. That and making sure that when kids come in that they if they did not get the education they needed before they got in our system help them get on track, addressing behavioral health issues and mental health issues. That’s one of the things I was passionate about in my career and I’m passionate about going into the Legislature.

Should we raise taxes, and under what circumstances?

I’m not opposed to anything. I want to do what it’s going to take to make the state of Nevada a better place for all of us to live in,.

Talking to the different municipal governments property taxes are things we might have to readdress and look at. When the current caps on taxes were put in place we were at a different economic place as a state and those things have changed. We may have to look at addressing that to better fit the economy we’re at today.

Where might we need to expand or reduce the budget?

How do you plan to diversify Nevada’s economy and create more jobs?

What should we do next on solar?

The state of Nevada, 90 percent of the time it’s sunny and when it’s not sunny it’s windy and sometimes it’s sunny and windy. I really feel we should be the leaders nationally on solar and wind power, and I’d like to see us work towards that.

What should Nevada’s next step be on the stalled Education Savings Account program?

That’s a really important topic and a hot topic at the doors in my community. Nevada schools, for the most part, are at the lowest part of the education ranking nationally so we need to do resource funding in general for our schools so our students no matter what school they attend in the state have an equal opportunity for a good education.

I’m a mom (and) all my children went to public schools. My daughter is a public school teacher. I would like all of our schools to have the resources that they need and educators receive the benefits that they need to adequately teach. At the end of the day I’d have to do what was best for those students within our community and the one thing I heard over and over again was that they wanted their public schools to be competitive.

What should Nevada’s minimum wage be?

My daughter is an awesome mother of two who works hard at a job where she makes $10 an hour. That is just not a livable wage. So I would definitely be in support of raising our minimum wage to a livable wage and that would have to probably be incremental. We need to have a wage where families can live while taking into consideration businesses.

I know that there’s a push for $15 and that might be the best rate for minimum wage; however whatever rate we have it will take us some time to get there. I’m not sure of the exact number. It could be $17 or $18 and it might be $12. I’m not sure exactly what that rate is, but I know for my family personally, my daughter lives it.

Will you work across the aisle, and on what issues?

Every issue is an across the line issue. There’s not one in the state that’s a Democratic or Republican issue.