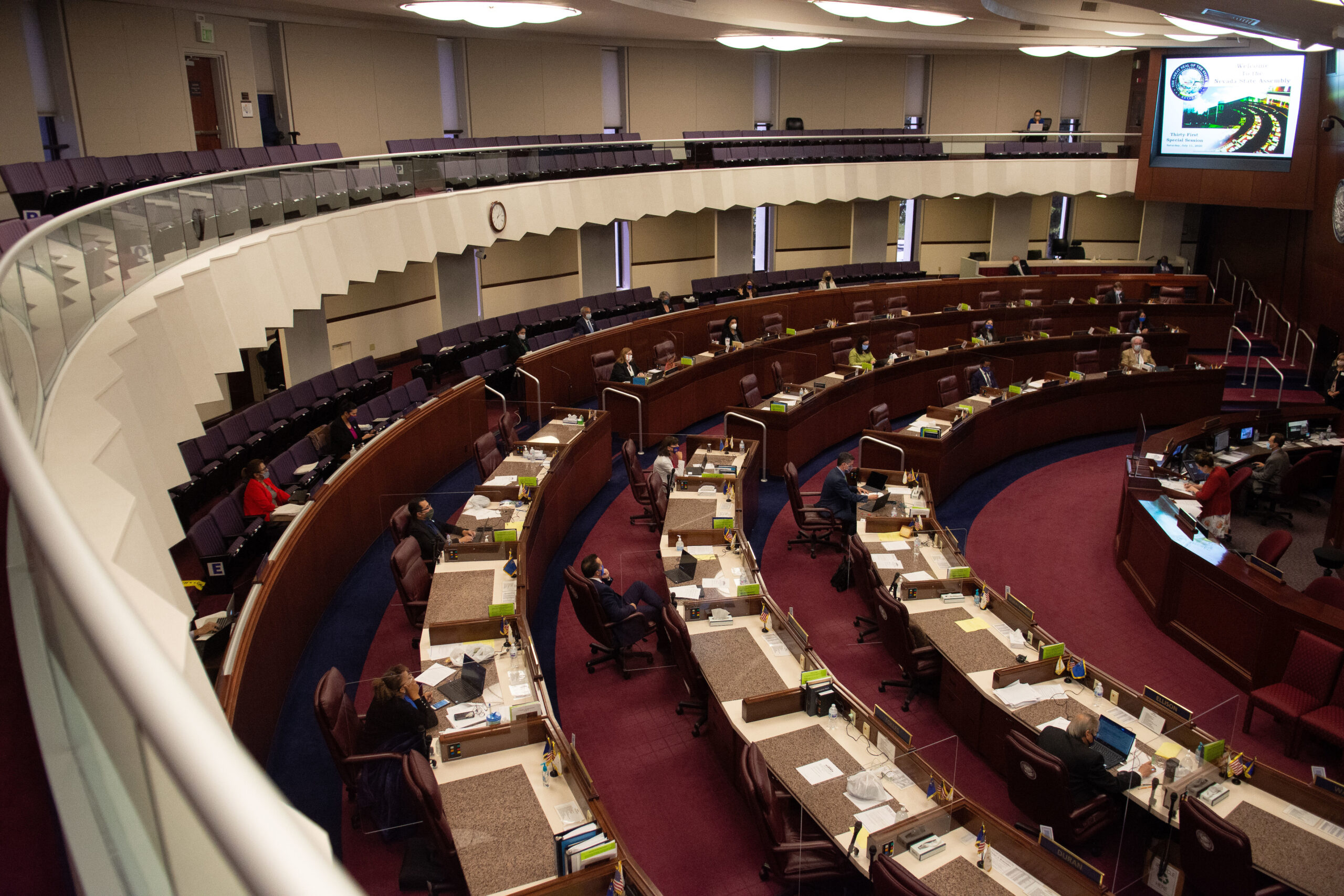 A key plank of Gov. Steve Sisolak’s plan to balance the budget by freezing merit pay and implementing once-a-month furloughs for state employees was sharply panned by many state workers during the proposal’s first public hearing.

But more than a dozen state workers, who testified against the bill (AB1) during a hearing in the Assembly on Saturday, said the state should not balance its budget through cuts to its workforce.

Paige Menicucci, one of the workers who testified, said that she’s putting in more hours during the COVID-19 pandemic while working from home. She previously lost her job working for a local regional quasi-governmental agency during the Great Recession and said the furloughs and pay freezes would cause hardship for her and other state workers.

AB1 would require state employees to take the equivalent of one unpaid furlough day a month, with a sliding scale requiring part-time workers employed by the state to take a proportional amount of unpaid time off.

The bill creates an equivalent “premium holiday” for state agencies paying into the Public Employees’ Benefits Program (PEBP). That means state agencies for one month of the fiscal year will pay their normally set aside state subsidy share of the health insurance program into the state's general fund, rather than into PEBP.

The bill does create some exemptions to the furlough requirement. Any agency with employees in a field of “critical need,” including public health, safety or welfare, can opt to not require employees take the furlough days, but instead requires them to reduce their salary by a proportional amount (4.6 percent) as if they had taken furlough days.

The bill will also exempt employees of the state Department of Tourism and Cultural Affairs. That agency, which is funded by hotel room taxes, has already cut weekly hours of division employees to 32 hours a week, which is equivalent to a once-a-week furlough.

But several Democratic legislators appeared hesitant to apply an across-the-board furlough policy for state employees, asking if it would be possible to limit furloughs for those on the lower end of the salary scale,

Department of Administration Director Laura Freed said the majority of state workers (more than 10,700) make less than $60,000 a year, with the rest broken down as follows:

Democratic Assemblywoman Daniele Monroe Moreno said her biggest concern with the legislation is that the furlough and subsequent decrease in salary for state workers on the lower end of the salary spectrum would in turn may need to use social or medical programs offered by the state but are at risk of having their budgets slashed to address Nevada’s budget shortfall.

“If they take that one day of furlough, 12 days in total, has a greater impact on the income coming into their home,” she said. “They would have to use, as my colleague mentioned, some of those services that we are also being faced with cutting.”

Fellow Democratic Assemblywoman Heidi Swank suggested that state workers on the higher end of the pay scale be required to take additional furlough days, which would “(spread) the pain out in ways that don't overly burden folks that are not making as much money as people who are at the upper levels.”

Freed said that it would take the department several days to run the analysis to estimate savings if certain categories of state workers had to take additional furlough days.

Republican Assemblyman Greg Hafen III suggested during the hearing that lawmakers, who are currently not affected by the bill given constitutional prohibitions on changing legislative salaries during their terms of office, should donate or give up a portion of their salary in solidarity with state workers.

Legislators, who are normally paid $160 a day for the first 60 day of normal legislative sessions, opted to voluntarily reduce their salary by 4.6 percent in the 2011 session to match similar furloughs asked of state workers, a move that returned a combined $25,000 back to the state.

More than a dozen public employees testified against the legislation, which they said unfairly placed the burden of balancing the state’s budget on the backs of workers.

Ken Edmonds, another state employee, suggested that lawmakers were taking the easy way out by proposing the furloughs and pay freezes instead of raising taxes on corporations.

“State workers and the communities we serve are always asked to make sacrifices while corporations enjoy low tax rates, subsidies and deductions,” Edmonds said. “It’s time for corporations to share in this sacrifice.”

The state workers have been supported by AFSCME Local 4041, which represents several categories of state workers granted rights in 2019 to collectively bargain with the state for pay and benefits. The union has sharply criticized Sisolak’s plan for furloughs, filing an Unfair Labor Practices complaint against his administration last month.

No one testified in favor of or neutral on the legislation.

Correction at 6:11 p.m. on Saturday, July 11, to correct information on how the bill affects the state's Public Employees' Benefits System.