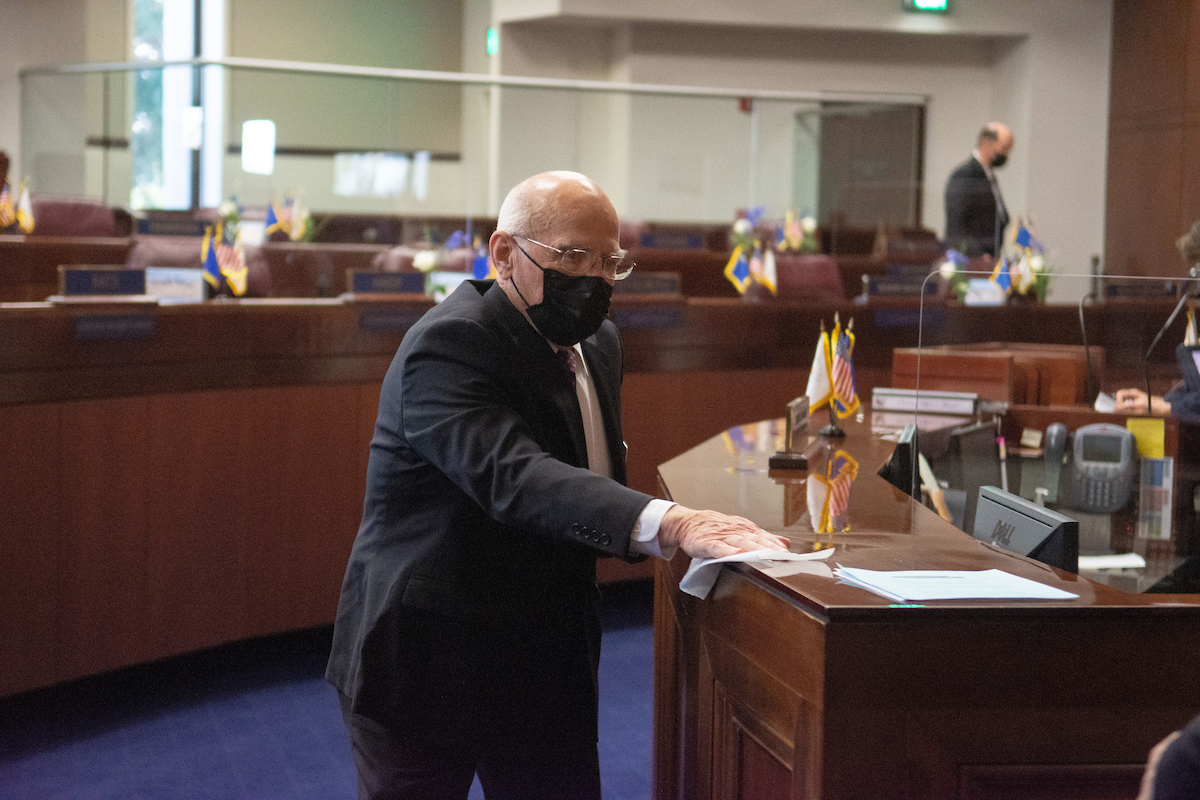 Four conservative lobbyists are suing the governor, a top lawmaker and legislative staff, arguing they are suffering irreparable harm from COVID-prevention rules that have kept the legislative session largely virtual and bar lobbyists from entering the Legislative Building.

The complaint was filed in federal District Court on Wednesday, on behalf of Shawn Meehan (a conservative activist based in Douglas County), Melissa Clement (head of anti-abortion group Nevada Right to Life) and Janine Hansen and Lynn Chapman (leaders of Nevada Families for Freedom and leaders of the far-right Independent American Party). All four were registered lobbyists during the 2019 legislative session.

The lawsuit seeks a court-ordered injunction to “immediately allow plaintiffs access to the State Capital to engage in lobbying activities,” saying that emergency orders limiting public access to the Legislature violate their constitutional rights to petition the government and free speech. They also argue that Nevada is no longer experiencing a bonafide emergency to justify the restrictions.

“Defendants are engaging in deliberate and unconscionable conduct at this juncture to preclude Plaintiffs from engaging in lobbying activities despite any empirical data demonstrating an emergency for such preclusive action,” the complaint said.

Sisolak’s office said the governor had no comment on the lawsuit, and Ford’s office said it couldn’t comment on pending litigation. Cannizzaro’s office didn’t immediately respond to a request for comment.

Legislative staff are preventing lobbyists and the general public from entering the Legislative Building for now, with only lawmakers, essential staff and some media allowed to gather in person. But officials have announced plans to vaccinate personnel next week and left open the possibility that the format will relax later in the 120-day session.

Committee hearings are being conducted virtually, with lawmakers videoconferencing in from their offices rather than gathering together in committee rooms. Lobbyists are allowed to make appointments with lawmakers through videoconference, although formal registration of lobbyists has not opened up and a bill to create modified lobbyist registration policies is pending.

Plaintiffs want to see such a distinction between regular Nevadans and those formally lobbying.

“Without the ability to register as a lobbyist, Plaintiffs are simply reduced to lay advocates, no different than members of the public,” they wrote.

State lawmakers have already introduced legislation (AB110) that would change the definition of lobbyist in law by removing sections requiring a lobbyist to be physically present in the Legislative Building. The bill was heard on Tuesday and is scheduled for a committee vote on Thursday.

“Defendants have continued to utilize the Emergency Directives to preclude lobbyist and the public from the State Capital to further their political agendas behind closed doors,” the suit said.

Updated at 7:30 a.m. on Thursday, Feb. 18, 2021 to correct that Chattah represented a church in Las Vegas, not Northern Nevada.