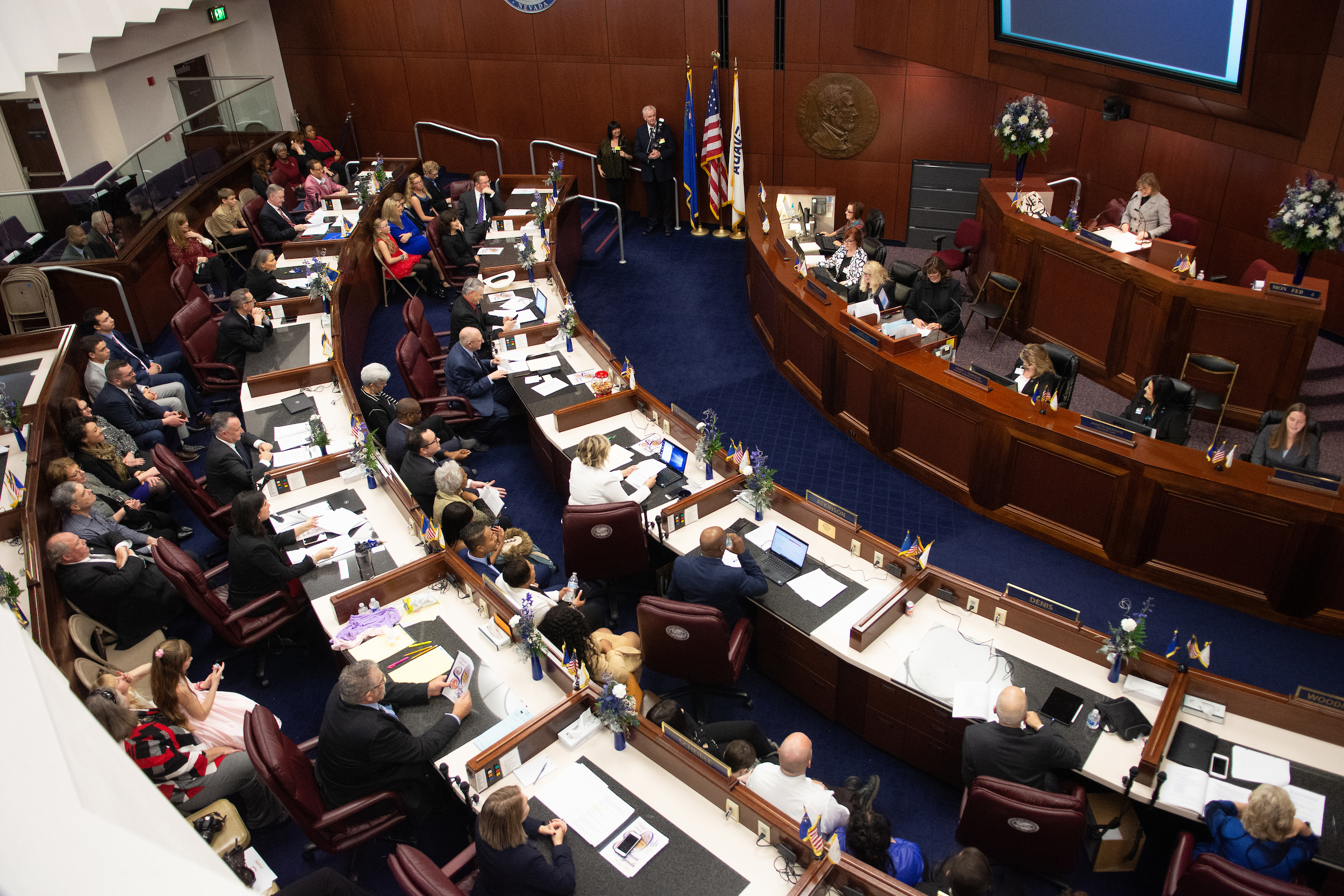 No Senate Republicans appear likely to vote for a key revenue component worth nearly $100 million over the state’s two-year budget, potentially blowing a major hole in Gov. Steve Sisolak’s proposed budget depending on the outcome of legal opinion from legislative attorneys.

In separate interviews this week, the eight Republican state senators told The Nevada Independent that they had largely ruled out voting to stop a scheduled decrease in the state’s payroll tax rate which otherwise would be automatically triggered by provisions in the 2015 package of $1.1 billion in new and extended taxes.

Although Democrats have requested an opinion from legislative attorneys to determine whether a two-thirds vote is necessary to stop the scheduled decrease, the party will likely need to find at least one willing Republican in the Senate to vote on extending the taxes, or else face a shortfall of about $100 million in tax revenue over two years of the budget cycle — all coming while Democrats scurry to find additional funds to pay for a promised 3 percent raise in teacher pay.

Sisolak — who promised no new taxes in his January State of the State address — nonetheless included in his budget a call to ax one of the lesser-known features of the 2015 tax increase package championed by former Gov. Brian Sandoval. Under that law, if revenue from the Modified Business Tax (payroll tax), Commerce Tax (revenue tax on business income over $4 million) and an excise tax on banks exceeds projections from the state’s Economic Forum by 4 percent, the payroll tax rate must automatically decrease in subsequent fiscal years.

That happened in October 2018, when tax officials announced that the tax rate was set to decrease from 1.475 percent to 1.378 percent for most businesses and from 2 percent to 1.853 percent for finance and mining industries in July 2019, the start of the next fiscal year. Keeping the higher rates in place would bring in an estimated $48 million in each year of the two-year budget cycle.

The question of whether extending expiring or “sunset” taxes falls under the Constitution’s requirement for a two-thirds vote for a bill that “creates, generates, or increases any public revenue in any form” has not been explicitly addressed by the Nevada Supreme Court or the Legislative Counsel Bureau.

A similar extension was approved in 2013 (again passed with a two-thirds majority), and made permanent during the 2015 Legislature as part of Sandoval’s $1.1 billion approved increase in new and extended taxes to pay for K-12 education.

So barring a contrary legal opinion, extending the payroll tax rate will take at least one Republican vote in a Senate where Democrats are one seat short of a supermajority. (Assembly Democrats control 29 seats and can pass a tax increase without any Republican votes.)

In a statement, Sisolak spokeswoman Helen Kalla said that the governor was confident his budget would be funded regardless, and that he believed it did not require a two-thirds vote to extend the payroll tax rate.

“The governor looks forward to the Legislative Counsel Bureau’s forthcoming legal opinion on whether a two-thirds vote will be required, and he is confident that his proposal to continue the existing (Modified Business Tax) rate does not trigger such a requirement,” she said in an email. “Regardless of what (the Legislative Counsel Bureau) determines, the governor is confident that legislators of both parties will support keeping funding at our current levels in order to help fund our schools and educators, provide health coverage under Medicaid expansion for our families, and feed our seniors through Meals on Wheels.”

But Republicans have either ruled out voting for such an extension entirely, or say their vote depends on how the state budget shakes out — or say they would require significant concessions from Democrats.

Republican Senate Minority Leader James Settelmeyer said he wasn’t necessarily against “any and all revenue” options on the table, but added that he thought removing the automatic buydown of the tax rate would go against the agreement reached in 2015 and wasn’t something he favored.

“I see no reason to go back on our word,” he said. “If we’re looking for more revenue, let’s have a discussion.”

Others in the Republican caucus have ruled out voting for the measure entirely. Sen. Ben Kieckhefer said he would vote against any such proposal amending the automatic buydown.

“It was a mechanism that was inserted specifically to function as it is functioning now and to unravel that, unravels the entire concept of what we approved in 2015,” he said.

Kieckhefer added that he would be unwilling to “horse-trade” and swap his vote for a guarantee of one of his bills passing, saying he hasn’t “introduced a bill this session I didn't walk through the door being willing to let die.”

Fellow Northern Nevada Republican Sen. Heidi Gansert gave a flat “no” when asked if she would support extending the tax.

“I don’t think there’s any support for doing that,” she said.

Still, other Republican senators declined to entirely close the door on voting to extend the tax, though said they had significant concerns about extending taxes or said they would want to see significant concessions or changes before voting for the change.

“We never like to make our final decisions until we have to push the button, but I’m inclined not to support it,” Republican Sen. Keith Pickard said. “I think that it’s a mistake. We made promises to people that if we got agreement to the Commerce Tax, then that buydown was part of the deal. So to me it feels like we’re going back on our word. We’ll look at the final piece when it comes up, but if I were to vote on it today with what I know, it would be no.”

Pickard added that his support would be contingent on ensuring that the Legislature “keep the taxpayers whole” and not collect more tax revenue than what legislators had previously promised to collect.

Republican Sen. Scott Hammond said he voted for the initial 2015 tax package in part because of the automatic buydown, and said Thursday that if the vote was held today he would not vote to extend the payroll tax rate beyond the scheduled buydown.

“There’s no way I would vote for it,” he said. “They’d have to really sweeten that, but I don’t want to touch that, because that’s why we put that in the first place, to give tax relief to those small businesses in case the Commerce Tax came in over the top.”

Republican Sen. Pete Goicoechea said he hasn’t made a decision either way about whether he would vote for raising the MBT.

“I’m still waiting to see the budget,” he said. “We’ve got to see where we’re at, how much revenue we’re going to need.”

Fellow Republican Sen. Joe Hardy said he didn’t see a need to change the scheduled buydown at this point, suggesting that lawmakers look to cut other spending before looking at extending the buydown. He said he wanted to see how still-pending big-ticket items such as the state budget and a long-promised revision to the K-12 education funding formula affected the budget before declaring any position with 31 days left in the session.

In a similar vein, Sen. Ira Hansen said he wasn’t “interested” in seeing a tax expansion while the state’s economy was doing well, but wanted to see more details of the budget and how spending would shake out before committing one way or another on the issue, despite initial reservations.

“My instinct would be to vote against it, but I want to see what the options are before I commit completely,” he said. “I’m not an anti-tax guy.”