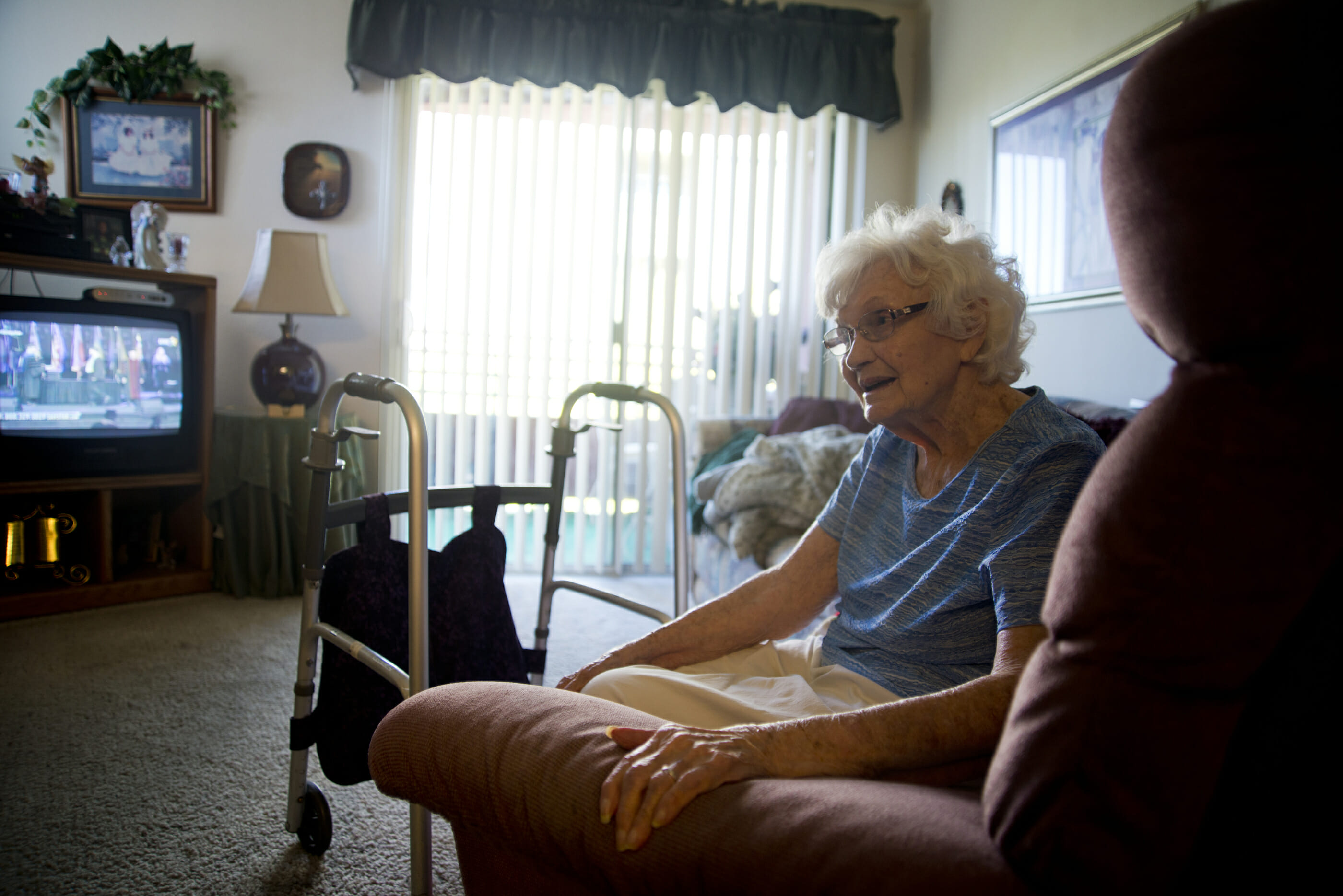 More than half of Nevada’s private sector workforce isn’t offered a retirement savings plan through their employer — a slow-moving crisis that could affect older Nevadans and cost the state millions in safety-net programs.

According to an AARP estimate, approximately 557,000 private sector workers, or 57 percent of the state’s non-governmental workforce, work for a business that does not offer any kind of retirement savings plan. It also estimates that a growing population of low-income seniors will cost the state millions of dollars in additional spending on safety net programs such as Medicaid, food stamps and housing assistance.

But Nevada policymakers are considering an alternative that advocates say could help fend off the pending crisis — a state-backed retirement savings program that would automatically enroll every Nevada private sector worker without an employer-sponsored program in a basic savings program.

The proposed “auto-IRA” program, under the title of the Nevada Employee Savings Trust, was advanced Wednesday as part of a series of recommendations by the Legislature’s interim Task Force on Financial Security. Two Republicans on the panel, Assemblyman Al Kramer and Senator Pete Goicoechea, voted against the recommendation.

Although the legislative task force doesn’t have the authority to introduce bills, Democratic Assemblywoman Ellen Spiegel said during the Wednesday meeting that she was considering introducing the bill herself during the 2019 Legislature and called it a critical step for the state.

“I think it becomes extremely important for the state to be stepping in and helping people get the retirement security that they need,” she said.

Unlike defined benefit plans such as a pension, where workers pay into an investment account and are guaranteed regular monthly income in retirement, the proposed auto-IRA plan would create a state-backed system providing individual retirement accounts, or IRAs, for workers at businesses that don’t offer a private retirement savings program. Such systems would be “opt-out” for workers, meaning private sectors employees would be automatically enrolled and making contributions to a retirement fund unless they expressly asked to be removed from the program.

Increasingly, fewer and fewer businesses offer their employees retirement programs — an AARP estimate found that about 80 percent of Nevada small businesses with fewer than 100 employees don’t offer a retirement plan, and only 44 percent of large employers offer a savings plan.

Former state Treasurer Kate Marshall, who presented the initial idea of the plan to the task force and helped author accompanying draft legislation, said many of the proposed details on program administration would be left up to the Legislature but that her initial goal was to enroll 250,000 workers in the program by its third year of operation. Marshall, who is running for lieutenant governor, said the program was purposefully simple and designed to get workers in the door for retirement savings while giving them flexibility to roll over to new plans down the line.

“This is meant like a starter home,” she said in an interview. “Very very conservative, very simple, two or three investments, that’s how it normally is.”

To date, at least 10 states and one city (Seattle) have adopted some form of a state-facilitated retirement savings plan, and 22 states and cities have introduced legislation or an ordinance to adopt a similar plan, according to the Georgetown Center for Retirement Initiatives.

Backers of such initiatives say the advantages are twofold — one, it creates a nearly universal retirement savings system that all employees, regardless of the size of their employer, can take advantage of for retirement savings. Plans also follow individual workers from business to business, a key feature when workers change jobs more rapidly.

And two, a properly-designed system wouldn’t overtake or reduce the market share of private-sector retirement plans and would still allow businesses to offer their own plans with additional sweeteners or perks, such as an employer contribution to retirement accounts, not offered under the base plan.

Sarah Gill, a policy analyst with AARP who’s advocated for similar programs in other states, said the plans are designed to be a base level of retirement savings for people who otherwise wouldn’t start saving for retirement, but that the programs aren’t intended to replace private retirement plans offered by employers.

“This is sort of a side account that we’re hoping people will save extra money in. This is not intended to be a be-all, end-all,” she said. “Our hope is that people become lifetime savers, and we create a whole new cohort of people who never saved for retirement before. They’re supplements, not necessarily a panacea.”

Draft legislation included as part of the recommendation includes more details on how the program would work, including creation of a separate state board staffed by the state treasurer’s office and chaired by the lieutenant governor to administer the program and determine aspects such as contribution rates. It lays out provisions requiring the board to act solely in the interest of covered employees and not maximizing returns on the fund, and requires a yearly audit of its finance be submitted to the governor and Legislature. It also sets an intended start date of July 1, 2021.

Asked why the draft version of the bill included the lieutenant governor in charge of the board, Marshall, who is running for the position, said she had been “heavily” involved in the planning process and cited her experience running similar programs through the state-administered college savings plan during her time as state treasurer.

“It’s a draft proposal — I think the structure’s well, but if the Legislature decides a different structure then I guess they decide a different structure,” she said. “I’m very familiar with the type of oversight that needs to be done to make sure that they are administered correctly for the people of Nevada.”

Auto-enrollment policies appear to be successful in other states. Oregon, which launched its state-managed retirement savings account program first with a pilot program in July 2017 and later expanded to cover all private employers, has registered more than 750 businesses to take part in the program and signed up about 33,390 workers in its first year of operation. About 25 percent of employees at registered businesses opted out of the program.

The investments chosen by the trust itself would likely be managed by a private investment manager, picked through a competitive bidding process. Marshall said her goal was to avoid any up-front costs to the state by leveraging investment fees through long-term contracts that would allow the investment firm to recoup their costs over a longer period of time.

Notably, the draft legislation includes a provision that implementation can be blocked if the board determines that the program violates the 1972 Employee Retirement Income Security Act (ERISA) — a hearkening back to last year’s vote to overturn a federal guideline that gave states more expressed permission to set up state-run retirement accounts.

The original idea for a government managed retirement savings program originated from bipartisan sources — the concept is traced back to a Brookings Institution report co-authored by a longtime researcher for the conservative Heritage Foundation, and the idea was backed by both Barack Obama and John McCain during the 2008 presidential election.

But Congress balked at setting up a federal retirement savings plan during Obama’s two terms in office, and has moved in the opposite direction under President Donald Trump. In March 2017, Congress approved a rollback of a Department of Labor “safe harbor” rule that essentially gave state and local governments leeway to launch their own retirement savings systems without fear of violating existing law governing private pension plans.

Gill said eulogies for state-based auto-IRA programs are overblown — the congressional vote overturned a guidance for how states should set up similar programs, but didn’t outright mean such programs would violate federal pension law.

“There’s just kind of an open playing field,” she said. “The government hasn’t said states can’t do this, they just don’t have a specific set of guidance for states to move forward.”

But opposition to the programs does exist — the U.S. Chamber of Commerce issued a report last year calling the concept “well-intentioned” but ultimately flawed, given better benefits available to public plans and the limits on how much workers and their employers can contribute to the accounts.

Kramer, one of two no votes on the task force’s recommendation, said he applauded the concept but thought the state should make it easier for employers to offer retirement savings programs and said he was concerned about the state taking on a larger role.

“Frankly, I think the manager of these funds should be chosen by the employer, not the state,” the Republican assemblyman said.

It’s unclear how much support the program will have from the state’s next governor — a spokesman for Republican candidate Adam Laxalt didn’t return an email seeking comment, and a representative for Democratic candidate Steve Sisolak was noncommittal.

“Steve believes financial security in retirement should be attainable for every worker,” Sisolak spokesman Grigsby Crawford said in an email. “He will evaluate proposals like these when he's governor to determine what will do the most to help all Nevadans.”

Democratic Sen. Julia Ratti said during the meeting on Wednesday that the concept would address a “significant” issue in the retirement savings space, and cited her own personal experience — she tried setting up retirement accounts for her own small business of four employees, but found setting up her own saving program difficult.

“I would have loved at that time to have this opportunity for my employees to participate in a workplace savings program without the administrative burdens,” she said.