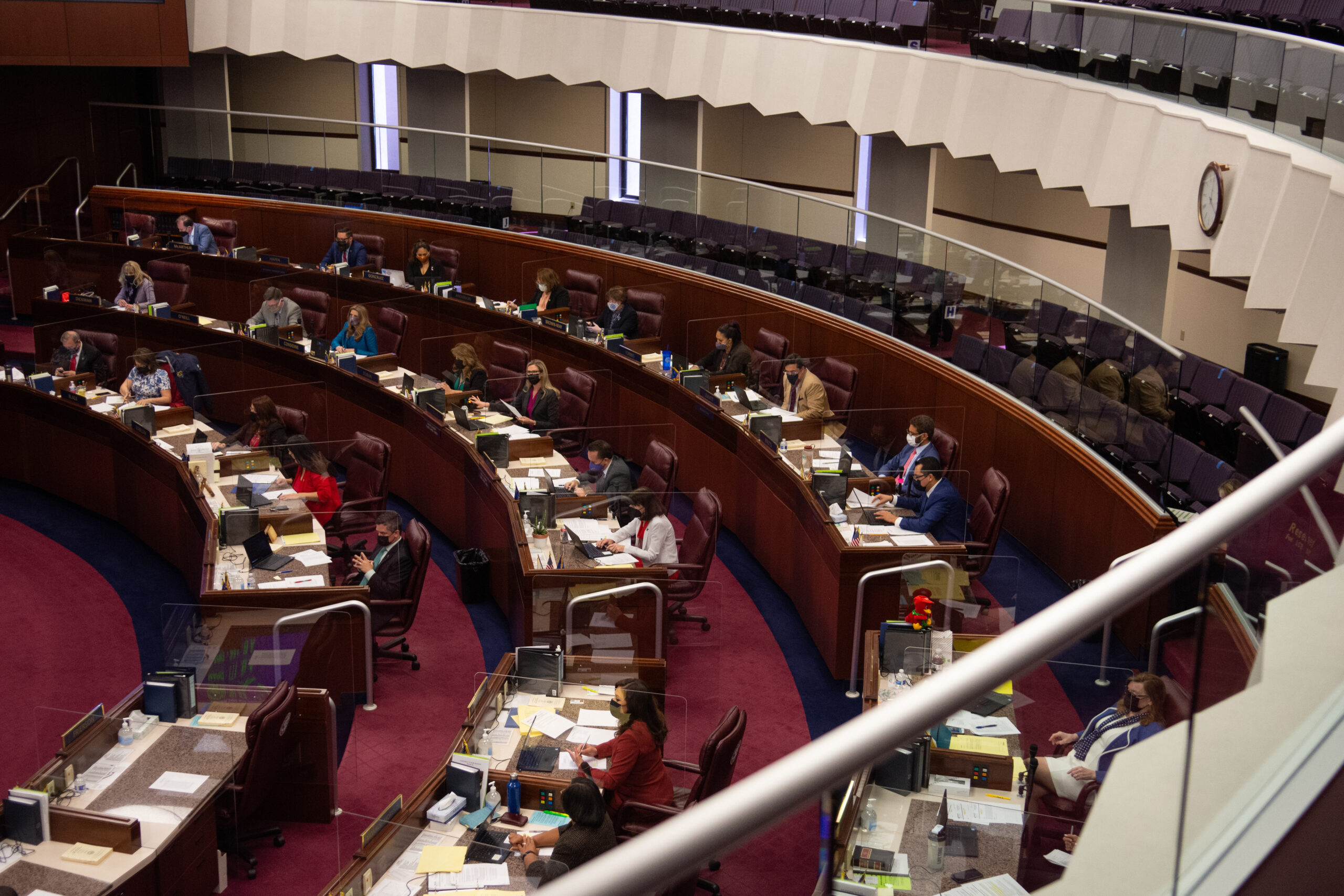 Nevada came one step closer to becoming the second state in the nation to pass a public health insurance option on Saturday after an Assembly committee voted to advance the legislation and two key leaders voiced support for the bill after being relatively mum on the measure.

While the public option bill faced a relatively clear path in the Senate, where bill sponsor Nicole Cannizzaro (D-Las Vegas) is the majority leader, it faced a less certain future in the Assembly, with leaders in that chamber remaining relatively quiet publicly on their feelings on the bill. That changed Saturday when Assembly Speaker Jason Frierson (D-Las Vegas) and Assemblywoman Maggie Carlton (D-Las Vegas), who chairs the Assembly’s money committee, not only voiced support for the legislation but defended it from attacks.

The Assembly Ways and Means Committee voted on party lines on Saturday to forward the measure on to a full vote of their chamber.

Carlton, ahead of the committee vote, acknowledged for the first time publicly her own doubts about the bill. But she said her concerns were assuaged by the fact that the bill, SB420, includes a significant runway before the public option would be available for purchase in 2026, allowing the Legislature to come back in 2023 and make any tweaks to the policy as necessary.

“It's not a secret I have been skeptical of this bill from the very beginning, but I've seen the amendments, and I have talked to a number of the different proponents of the bill and opponents of the bill on it,” Carlton said. “I feel much more comfortable knowing that in the future the people that are in this building now that do come back are well aware of what's going on, and I trust them to make the best decisions they can to protect the constituents of this state.”

Assembly Minority Leader Robin Titus (R-Wellington), however, didn’t mince words on the legislation, which has been uniformly opposed by Republican lawmakers who agree with the health care industry’s concerns about the bill.

“I think this piece of legislation is probably the single most damaging thing we’re going to do to health care access in our state in the entire time I’ve been in this building. I have incredible concerns about this bill,” Titus said. “We all say we want more access to care and, again, I've said it all along: Giving somebody a bus ticket without the buses and ensuring that the buses will be available, we might as well be throwing them under the bus, and I feel this bill throws health care under the bus.”

Frierson, however, pointed to the legislation’s “guardrails” and warned against the public being “misled about the nature of what we're doing.”

“There are concerns that are valid concerns, but we also have a thing called time,” Frierson said. “If this is not going to kick in until several years, then a subsequent Legislature can make adjustments. I beg to differ that this is the worst thing unless folks who plan on being here don't plan on doing their jobs, which is our job to look at future legislation and make adjustments.”

The comments from Carlton and Frierson marked the first time either has taken a publicly supportive position on the legislation, though Frierson is listed as primary sponsor of the bill.

On Friday, Carlton temporarily pumped the brakes on the legislation, saying the Assembly needed to take the time to get all interested parties “in the corral together” on the legislation before advancing it, while Frierson earlier this week deferred questions about the status of the public option bill — and whether it was getting tied up in legislative endgame conversations — to Cannizzaro, as majority leader.

The bill, as written, would require insurers that bid to provide coverage to the state’s Medicaid population to also offer a public option plan. While the plans would resemble existing qualified health plans certified by the state’s health insurance exchange, the legislation would require them to be offered at a 5 percent markdown, with the goal of reducing average premium costs in the state by 15 percent over four years. The public option would be available for purchase for coverage starting in 2026.

Health care industry representatives, however, have argued that not only will the bill not achieve its goal of increasing health care access and affordability but that it will destabilize Nevada’s already fragile health care system. To that end, they have proposed limiting the bill to an actuarial study of the public option concept as outlined in SB420 and letting the 2023 Legislature decide whether to move forward with putting a public option into law, depending on what the study finds.

Approving a public option just as an actuarial study would, however, be a gamble for Democrats, who control both chambers of the Legislature and the Governor’s Mansion. If they only approve a study, lose any one of the three parts of their Democratic trifecta to Republicans in 2022, and the actuarial analysis comes back and says the public option will achieve their goals and is financially feasible, it would likely be difficult, if not impossible, to pass a public option during the 2023 legislative session.

On the other hand, if lawmakers approve SB420 as drafted — including both the actuarial study and a timeline to establish the public option by 2026 — and the actuarial analysis comes back and says the proposal isn’t workable and either needs changes or to be scrapped entirely, Democrats could make the necessary changes to the bill if they remain in control in 2023, while Republicans would likely remain eager to change or undo the policy if they gain at least some control in 2023.

The Assembly Ways and Means Committee also approved a hodgepodge amendment to the bill on Saturday that would make several minor, mostly technical changes to the bill, require that a niche benefit be covered by the state Public Employees’ Benefits Program and add a $600,000 appropriation to the Silver State Health Insurance Exchange to cover the costs of implementing a public option.

The bill now heads to the Assembly for a final stamp of approval. If the Assembly passes the bill, the Senate will be required to concur with the changes made on the Assembly side before it heads to Gov. Steve Sisolak’s desk. Sisolak has not yet taken a position on the bill, though it would likely be politically fraught for a Democratic governor to veto a public option bill.

Riley Snyder and Michelle Rindels contributed to this report.