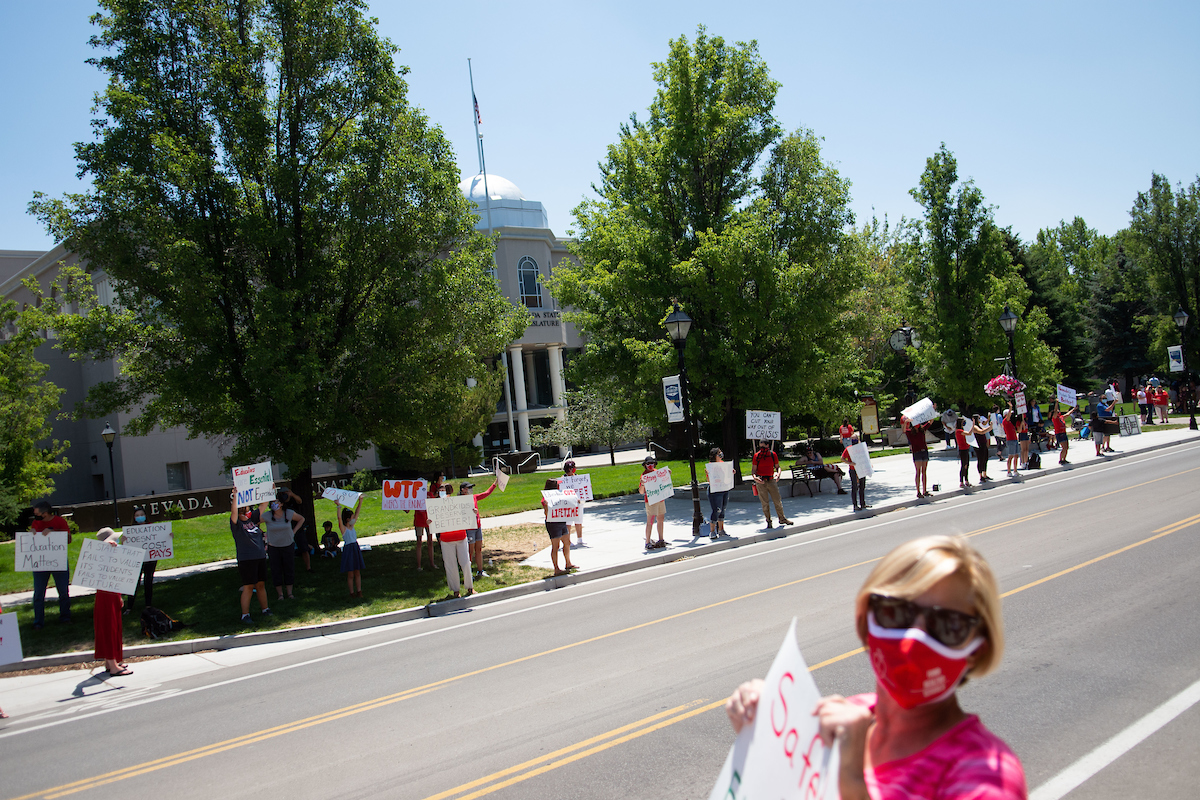 From a large teacher union demonstration outside the Legislative Building to a long list of advocates weighing in through public comment phone lines, frustration over hundreds of millions of dollars of planned cuts to education was a prominent theme on the first day of a special session.

The proposed cuts play out like a reversal of the past three sessions, when a state recovering from the recession added and expanded a long list of “categorical” programs meant to provide extra support to students with extra needs. But on Wednesday, legislators spoke of cutting $70 million in hard-fought “weights” for disadvantaged students, eliminating $31 million in literacy specialists in a Read by Grade 3 program and slashing millions from anti-bullying and school safety initiatives.

The "story of our response to COVID-19 could easily be about what we sacrificed and what went wrong,” state Superintendent Jhone Ebert said in opening remarks as she described in broad strokes the state’s attempt to make the best of the pandemic’s fallout. “At the same time, this is a turning point in education, and time to focus on what is suddenly possible for the future."

The cuts amount to $166 million for K-12 education and $110 million for the Nevada System of Higher Education. Still, lawmakers tried to look for a bright side.

Democratic Assembly Majority Leader Teresa Benitez-Thompson pointed out that basic per-pupil support would not be cut and had been increased in 2019 by $300 per student. Categorical programs have long been her least-favorite funding arrangement because they work like grant programs and don’t give employees within them long-term job security.

But legislators also picked apart the budget proposal and highlighted the ways it could harm students. Yvette Williams of the Clark County Black Caucus said in public comment that she was pleading with lawmakers to view cuts through an equity lens because eliminating the “weights” would disproportionately affect Black students.

Clark County Superintendent Jesus Jara said that cuts of the program, authorized through SB178 in 2017, would be tough because of the sheer size of the reduction. But he said the overall strategy, which preserves unrestricted per-pupil funding while slashing restricted funding, allows the most flexibility.

“Any cuts will negatively impact our children,” he said. “However, the overall plan presented to you this afternoon is the least damaging option.”

Some Democratic lawmakers, including Assemblywoman Maggie Carlton, lamented the end of the Teach Nevada Scholarship, which provided up to $24,000 for aspiring teachers and was created in 2015 to stave off a teacher shortage.

Republican Lisa Krasner wondered aloud about the consequences of axing school safety and anti-bullying initiatives built up over the last five years, including $3 million allocated for “social emotional learning” and social workers. Also on the chopping block: More than $10 million set aside in 2019 to help reinforce campuses against school shooters and add school resource officers to police them.

"We feel very confident that we will still be able to continue a very robust program in anti-bullying,” she said.

Others took a more pointed approach with their questioning. Democratic Assemblywoman Heidi Swank asked what steps upper management personnel in the education system were taking to share the pain of the budget cuts.

Ebert said she was taking 12 furlough days like all state employees, while McNeill said she was giving back $30,000 of her salary, or about 10 percent. Jara said the district had frozen hiring in the central office but the situation was complicated because some administrators are bound by collective bargaining agreements — an answer that Swank later said did not give her much clarity.

She asked the question again when higher education officials took the stand to describe budget plans that included 12 furlough days for all staff and per-credit surcharges of $3 for community colleges and $6 for universities. University president and chancellor base salaries, in some cases, top $400,000.

Chancellor Thom Reilly said presidents and himself were taking 18 furlough days. Swank pointed out that she made $50,000 a year when she started as an assistant professor at UNLV in 2005.

"I just think the difference, to have six more furlough days when your salary is much higher than those new assistant professors, maybe needs another look,” she said.

Democratic Assemblywoman Selena Torres, who is a teacher, asked whether the cuts would affect Nevada’s goals to improve its low-ranking public education system under the Every Student Succeeds Act. Some initiatives facing imminent depletion, such as the Read by Grade 3 literacy program, focus on giving students the foundation they need to succeed in the rest of their academic careers.

"Our goals have not shifted,” Ebert said. “How we're going to meet those goals definitely will shift."

Updated at 11:42 a.m. on July 9, 2020 to reflect that proposed cuts to NSHE are about $110 million, correcting erroneous information from an earlier budget proposal document.