Supreme Court tackles question of whether public employees can be lawmakers 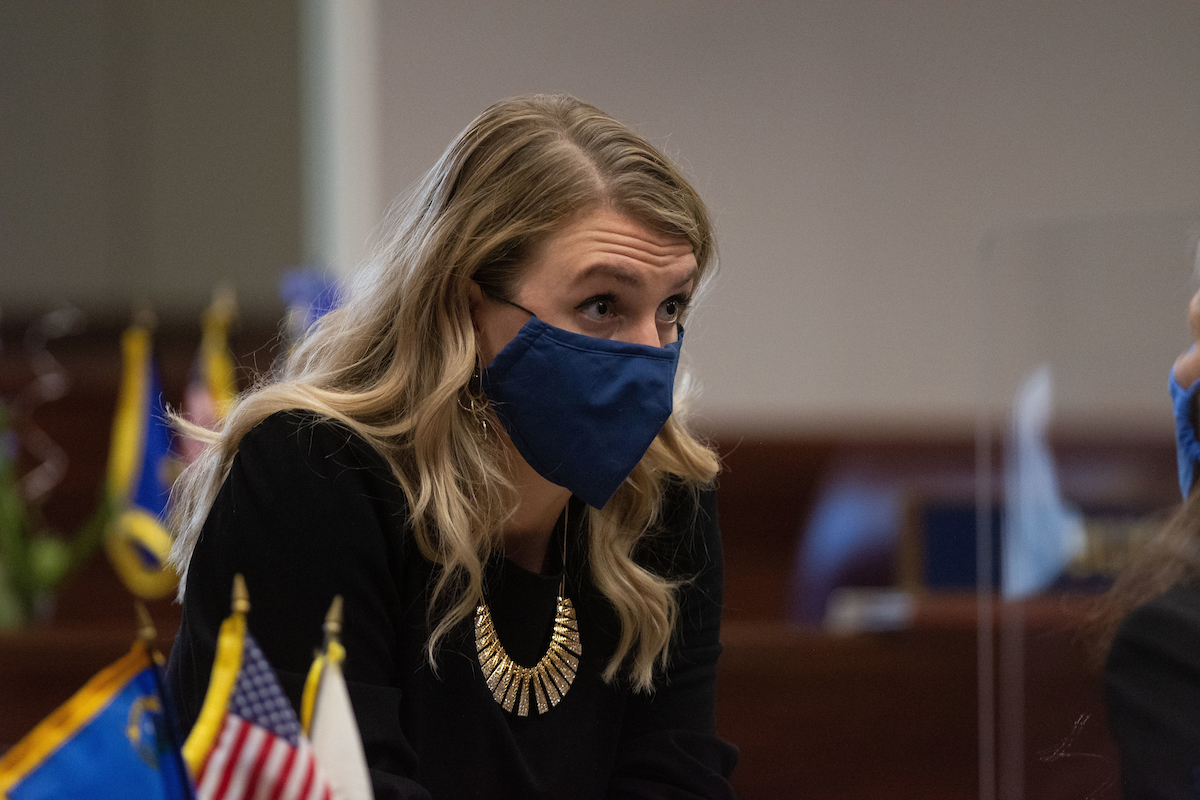 For decades, an unresolved legal question has quietly hung over members of Nevada’s part-time, citizen Legislature: Are the teachers, government attorneys, county employees and firefighters serving in Carson City violating the state’s Constitution?

That long-pending question could finally get a definitive answer, with members of the Nevada Supreme Court on Wednesday hearing oral arguments on a pair of cases that challenge the status of state lawmakers who are also employed by government agencies.

The cases heard Wednesday take different approaches — one is an appeal of a criminal case challenging a case prosecuted by state Sen. Melanie Scheible (D-Las Vegas), who works as a deputy district attorney in Clark County, while the other is brought by libertarian advocacy group Nevada Policy Research Institute (NPRI) and challenges the dual employment of nine current lawmakers also on the payroll for government agencies.

Though opposing counsel raised a host of procedural issues with elements of both cases, the pair of legal proceedings (another separation of powers case challenging Scheible was heard in September), are the latest attempts to find a definitive legal standard on whether individuals employed by a government can also serve in the legislative branch.

Over the past decade, NPRI has filed two similar lawsuits, and the state has seen a long line of other litigation and legal opinions dissecting the issue still unresolved by the state’s highest court.

The question stems from language in the state Constitution, which enshrines the separation of powers between the executive, legislative and judicial branches and holds that “no persons charged with the exercise of powers properly belonging to one of these departments shall exercise any functions, appertaining to either of the others, except in the cases expressly directed or permitted in this Constitution.”

But that language has invited uncertainty as to whether the separation of powers prohibition also applies to lower-level public employees such as teachers, professors, firefighters or local government employees from serving in the legislative branch.

For attorney Ryan Hamilton, representing a Las Vegas man prosecuted by Scheible on charges of sexual assault and burglary, the answer is clear — “no persons” means “no persons.”

“She effectively, per statute, stands in the shoes … as the elected district attorney,” he said during oral arguments. “She engages in charging decisions. She engages in prosecutorial investigation, she makes sentencing recommendations. And per Nevada statute, she does all of those things that the elected district attorney can do with the exception of having policymaking authority.”

But that argument was challenged by Clark County Deputy District Attorney Alex Chen (representing Scheible), who argued that a distinction should be made between lower-level public employees and those who execute the sovereign, or supreme authority, of government functions.

“While I understand that the plain language does say ‘no persons,’ it's still our position that the persons referred to are those that actually hold the sovereign functions of government,” he said.

Justice Kristina Pickering asked Chen if he was requesting the court “say the Constitution doesn't mean what it says when it uses the word persons.” Chen said he was referring more to the general context of the constitutional language.

Justice Douglas Herndon noted that even while prosecutors may work for a local government, they still prosecute cases and bring charges in the name of the state government.

Chen said he wasn’t disavowing that notion, but said a “critical distinction” existed between an elected district attorney who makes policy decisions, and deputies such as Scheible who prosecute cases on their behalf.

Hamilton faced his own probing questions from Justice Lidia Stiglich, who asked him “What authority does the state executive, the governor of the state of Nevada, have over a local prosecutor's office?”

“Candidly, I don't know, having never worked in a prosecutor's office,” Hamilton said. “What I would say is that the definition that this court has laid out of ‘executive power’ is squarely what the prosecutors are doing in the local courts every day.”

Hamilton asked the court to dismiss the charges against his client, calling it an “appropriate remedy given the severity of the situation and issue.” Chen disagreed, noting that another prosecutor worked on the case with Scheible, but asked the court to at least consider issuing a ruling with broader applicability beyond the individual case.

“I hope that it's not just the district attorney's office serving one type of very special executive function that this court determines are the only ones that would be violative of the separation of powers clause, despite all the other cases,” he said.

Broadening and clarifying the scope of separation of powers limitations is the aim of the other lawsuit heard by justices on Wednesday afternoon — a complaint originally filed by NPRI in July 2020 challenging the then-13 state lawmakers who also work as public employees (resignations and job changes have brought the number down to nine).

The case was dismissed in District Court last year, but NPRI’s attorney Colleen McCarty urged justices to reverse the lower court and uphold constitutional language designed to prohibit even “seemingly harmless encroachments between the branches of government.”

“For more than 100 years, the issue of dual service has evaded judicial review and continued unabated,” she said. “Even though this court has said, time and time again, that the division of powers is probably the most single important principle of government declaring and guaranteeing the liberties of the people.”

Though McCarty focused most of her arguments on the actual language and meaning of the Constitution, attorneys representing the challenged state lawmakers focused on an entirely different area — standing.

Attorney Bradley Schrager, representing two of the legislator defendants, said the case should be dismissed because NPRI failed to meet the necessary legal requirements to bring such a lawsuit forward.

Schrager noted that in past separation of power cases, NPRI represented individuals who desired the same public sector job held by a legislator — a way of showing that an individual was actively being “harmed” by the dual employment of that lawmaker (evidence of direct harm is a typical requirement to move a case forward).

That’s the legal path set forth by the court in a 2004 decision stemming from a lawsuit brought by then-Secretary of State Dean Heller, who similarly asked the court to enforce the separation of powers provisions against legislators who worked in the public sector. The court declined to do so, saying it would invite another separation of powers squabble by instructing the legislative branch on the qualifications of its own members, but left the door open for plaintiffs to challenge from the opposite direction and challenge the “executive branch employee” day jobs.

So what changed? In the current lawsuit, NPRI instead relied upon another form of standing created in the court’s 2016 decision in a case that challenged the quasi-voucher Education Savings Accounts program.

The 2016 decision created an exemption to the normal rules of standing — allowing for certain cases of “significant public importance” to come before the court that do not meet the typical standing requirements. Such cases are limited to those that involve a challenge to an alleged unconstitutional legislative appropriation and if “there is no one else in a better position who will likely bring an action.”

McCarty argued that NPRI met all three of those standing requirements — noting that the organization was challenging the salaries paid to legislators and had already been part of two similar lawsuits filed over the past ten years.

“If not NPRI at this time, then who?” she asked. “And if not now, when you have not only our case, but the three criminal cases related to the separation of powers that you're dealing with, it is clear that this is an issue that the public is interested in.”

But Schrager and other attorneys representing the named legislators staunchly disagreed. Schrager said NPRI’s focus on typically meager legislative salaries (about $9,000 for work during the 120-day legislative session) did not seem “particularly relevant” to the standing requirements needed for a case of this type.

“The point of that narrow exception was to identify the unconstitutional expenditure and appropriation of money, and to permit citizens to attack that without showing personal injury,” he said. “Far from being the main objective of the suit here, legislative per diems are essentially immaterial, or at least incidental here at best.”

Schrager also argued that NPRI misconstrued the “appropriate party” requirement, saying that the organization itself was not the “best, most direct beneficiary of the relief in the case,” given that such a party would instead be an individual coveting the public sector job of a legislator — similar to the two other cases filed on behalf of the organization over the past ten years. McCarty later said NPRI would be “happy” to bring a plaintiff forward if needed.

More broadly, Schrager said NPRI’s requests would have the ultimate effect of getting rid of the expenditure and appropriate party requirements, a result that would essentially “swallow and destroy the requirements of standing that have held in this state for over a century.”

“We're talking about a radical proposed disjuncture, with the entire law of access to courts in this state for the last 100 years,” he said.

The court took no immediate action on either case, but a decision is likely to come in the coming weeks or months.