After years of incremental health care reform, more than $200 million in budget cuts threaten to turn back time 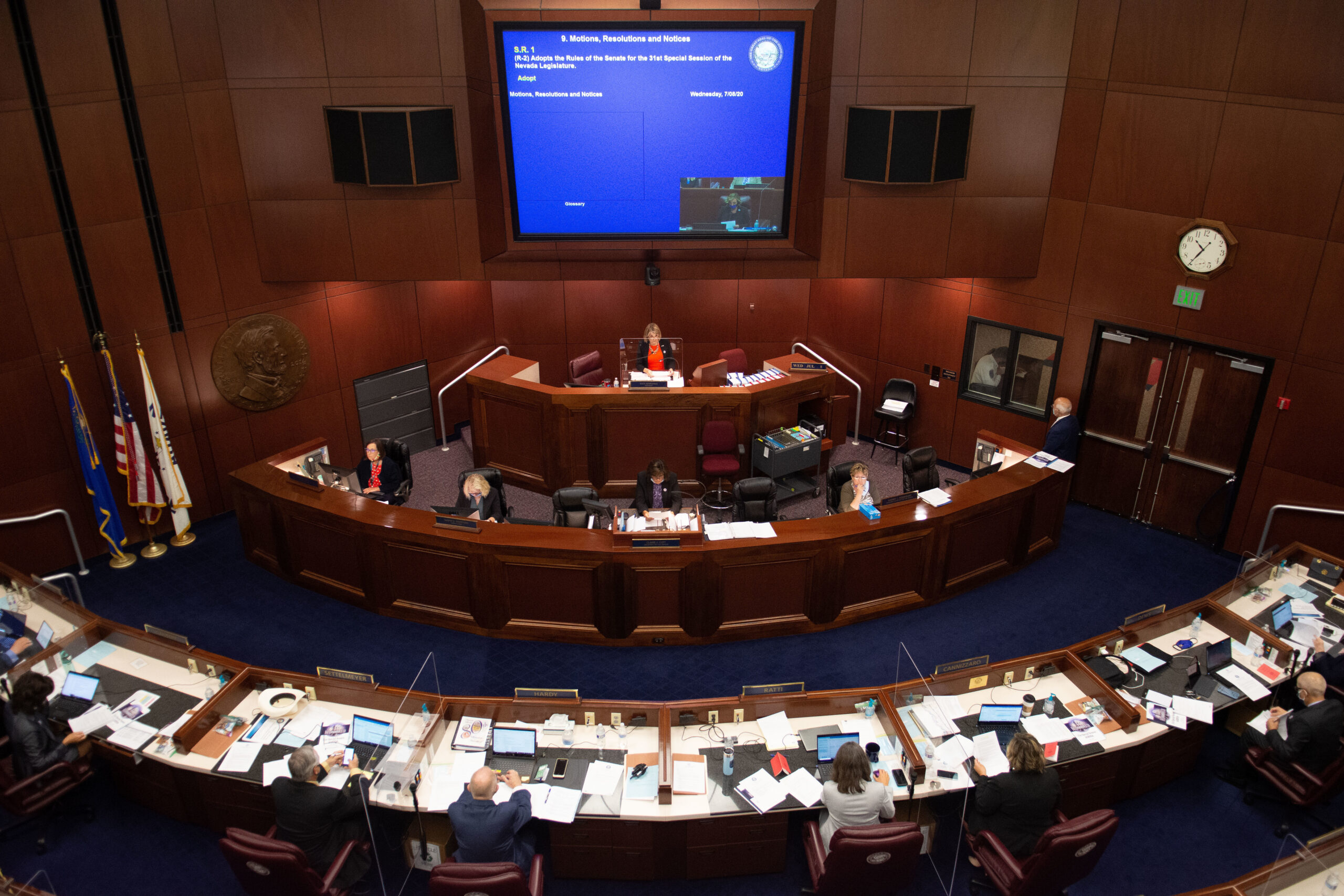 State officials presented to the Senate on Wednesday $233 million in proposed cuts from the health care budget that will slash key programs for low-income Nevadans and significantly pare back mental health services to ease a budget crisis caused by the ongoing coronavirus pandemic.

Many of the proposed cuts will roll back initiatives spearheaded by lawmakers and  the Department of Health and Human Services over the last few legislative sessions in an effort to improve health care in the state, which ranks among the worst in the nation. Health officials also plan to sweep dollars from existing accounts, such as one fueled by tobacco settlement dollars, to help make up the budget shortfall.

The recommended reductions to the Department of Health and Human Services budget will, if approved, make up nearly 20 percent of the $1.2 billion shortfall projected by the governor’s office and more than 42 percent of the proposed $549 million in agency rate reductions.

The K-12 general fund budget — which represents about 34.9 percent of total general fund spending, slightly more than the 33.5 percent that Health and Human Services comprises — faces proposed cuts of about $166 million.

The proposed health care cuts come as the Department of Health and Human Services continues to play an integral role in the state’s response to the ongoing COVID-19 pandemic. Richard Whitley, the department’s director, noted in his budget presentation the difficulty of cutting hundreds of millions of dollars in health services — most of which go toward supporting the most vulnerable Nevadans — in the middle of a global pandemic.

“What is being identified here is we’re delivering direct services in one hand in a crisis and we’re having to reduce down our spend with the other hand,” Whitley said. “I am doing the best I can at doing that with the least amount of harm possible, but there will be harm, and I’m not here to say that people’s lives won’t be impacted by these proposed reductions.”

The most significant cuts, $140.4 million, will come to the state’s Medicaid program, which has seen a 9 percent increase in its caseload since February as Nevadans lost their jobs and turned to the state for health insurance. No Nevadans will lose their Medicaid coverage as a result of the budget cuts — in part because of a mandate from the federal government that states not terminate anyone from the program in order to receive additional federal matching dollars — but the state is planning to limit or eliminate the services they can receive.

For instance, Medicaid plans to eliminate 12 services deemed “optional” by the federal government, to the tune of $18.7 million in savings. Those services include optometry, tenancy support, occupational therapy, basic skills training and psychosocial rehabilitation — benefits that both lawmakers and state health officials noted Medicaid enrollees rely on and aren’t going to be able to get elsewhere.

“The framework of mandatory versus optional is not, I mean it’s almost embarrassing to use those terms because they’re only relevant to a federal congressional act in terms of what governs Medicaid, not to the people who do need the health care service,” Whitley said.” So I do know that we will have impacts on people and their lives may be worsened by these services being eliminated. I can’t quantify that for you today. I just know I have limited spaces to go to make the reduction in our general fund spend.”

Medicaid has also proposed a 6 percent across the board rate decrease for all services, which will save the state $53 million, and eliminate hard-fought rate increases approved by the Legislature during the 2019 session for acute hospital services, neonatal and pediatric intensive care services and personal care services, a savings of about $12.4 million. Hospitals waged a long, public campaign for their increases and, along with doctors and other providers, have long argued that Medicaid rates overall in Nevada aren’t high enough as is.

Suzanne Bierman, Medicaid administrator, pointed to a Kaiser Family Foundation report that shows that Nevada has one of the highest Medicaid-to-Medicare ratios compared to other states,

Medicaid additionally plans to eliminate adult dental and limit dental services for pregnant women and children, limit physical therapy for adults to 12 sessions and eliminate certain duplicative hospice services from being provided in the home, for a total savings of $30.2 million. Remaining savings will come from delaying risk mitigation payments to managed care organizations, the private insurers paid by the state to provide Medicaid services.

Medicaid could see an additional $30 million in savings should the federal government extend the enhanced federal matching rate through the end of the year, a decision that doesn’t have to be made until July 25. Officials are hoping to delay implementation of the Medicaid changes to Oct. 1, at which point they would have more information about their funding situation.

Whitley, asked where Medicaid would put the extra $30 million, said that it was a difficult question to answer.

“Doing math on the page may be simple for budgetary people, but does turning something down really amount to turning it off? Does reducing the rate lose providers?” Whitley said. “The nuance of all of that would be considered and we’ll work day and night to provide if resources become available.”

Another $19.1 million in cuts have been proposed to public and behavioral health care programs in the state, with the majority coming from the Southern and Northern Nevada Adult Mental Health Services agencies.

Some of the savings will be achieved by freezing hiring vacant positions within both mental health agencies. But Southern Nevada Adult Mental Health Services also plans to stop providing residential services to 270 people, referring them instead to other organizations, such as Catholic Charities and Share Village, unless they receive additional funding through the federal CARES Act.

The state has shifted the way it provides mental health services over the past several years, putting the emphasis on enrolling people in Medicaid and directing them to private providers, instead of having the state directly provide services. But Sen. Julia Ratti noted during the hearing that stripping back direct mental health dollars, coupled with the cuts to Medicaid, could essentially mean the state will only be providing mental health services to its prison population.

“With the cuts that we’re talking about here, and then you pair those with the cuts to substance use treatment and mental health that we talked about in the Medicaid budget, and then you overlay housing, and the tenancy support … I feel like maybe we’re reverting back to a place where if you really need behavioral health services, you almost have to be part of the criminal justice to access them,” Ratti said. “It feels like we're heading towards a perfect storm.”

Lisa Sherych, administrator of the Division of Public and Behavioral Health, agreed.

“These are extremely difficult decisions to make,” Sherych said, choking up. “I was very hopeful that this next session was going to be a great one based on last session. So, yes, our focus is primarily going to be the justice-involved population.”

State officials plan to find another $30.2 million by freezing caseloads for some of its Aging and Disability Services programs, including, notably, its Autism Treatment and Assistance Program, to the tune of about $5.7 million in savings.

The Legislature appropriated $17.4 million toward the program last session, including funds to reduce a roughly 800-child backlog in a program that was only serving about 200 children. Now, the program has 892 children enrolled in it, with 191 on the waitlist — but those levels would be frozen under a proposed budget cut, though children will still be moved into the program at its current capacity as children age out or move.

Three other programs will also have their caseloads capped, including supported living arrangement services, which provide residential support to people so they can live in a community-based setting. The division has also proposed deferring a provide rate increase for SLAs, reducing payments for other programs, freezing vacant positions, eliminating travel and training and deferring maintenance on facilities.

Another $18.4 million in savings will come from Director Whitley’s office, including $1.5 million of the $6 million in family planning dollars lawmakers appropriated in the 2019 session. The remainder will come from funds swept from the Healthy Nevada Fund, which was set up with tobacco settlement dollars to fund certain health grants.

The Division of Welfare and Supportive Services plans to contribute another $15.7 million in budget reductions, primarily through funding the salary cost for eligibility workers through December through the federal CARES Act, about $14 million in general fund savings. The rest is proposed to come from a reduced general fund match in child support and other administrative changes.

The Division of Child and Family Services will be responsible for the rest of the budget reductions, about $9.4 million. The majority of that, $5.1 million, will come from changes to child welfare, including a reduction in funds to incentivize Clark and Washoe counties to innovate their child welfare funding streams. Another $3.7 million will come from freezing 53 vacant juvenile correction positions and reducing the number of beds at juvenile correction facilities from 224 to 160.

Even with the reduction, Ross Armstrong, the division’s administrator, said that there should be enough beds to meet the needs, with an average daily census for calendar year 2019 of 157.

“Across the country now for about the last decade, there's been a big push in reducing the number of young people we have locked up in correctional air, and that has occurred in Nevada as well,” Armstrong said. “We made sure we didn't cut the funding to the counties that work on the prevention work, we didn't cut parole, who does the aftercare to prevent them from going back into the facility, and we also maintained all of our children's mental health beds.”