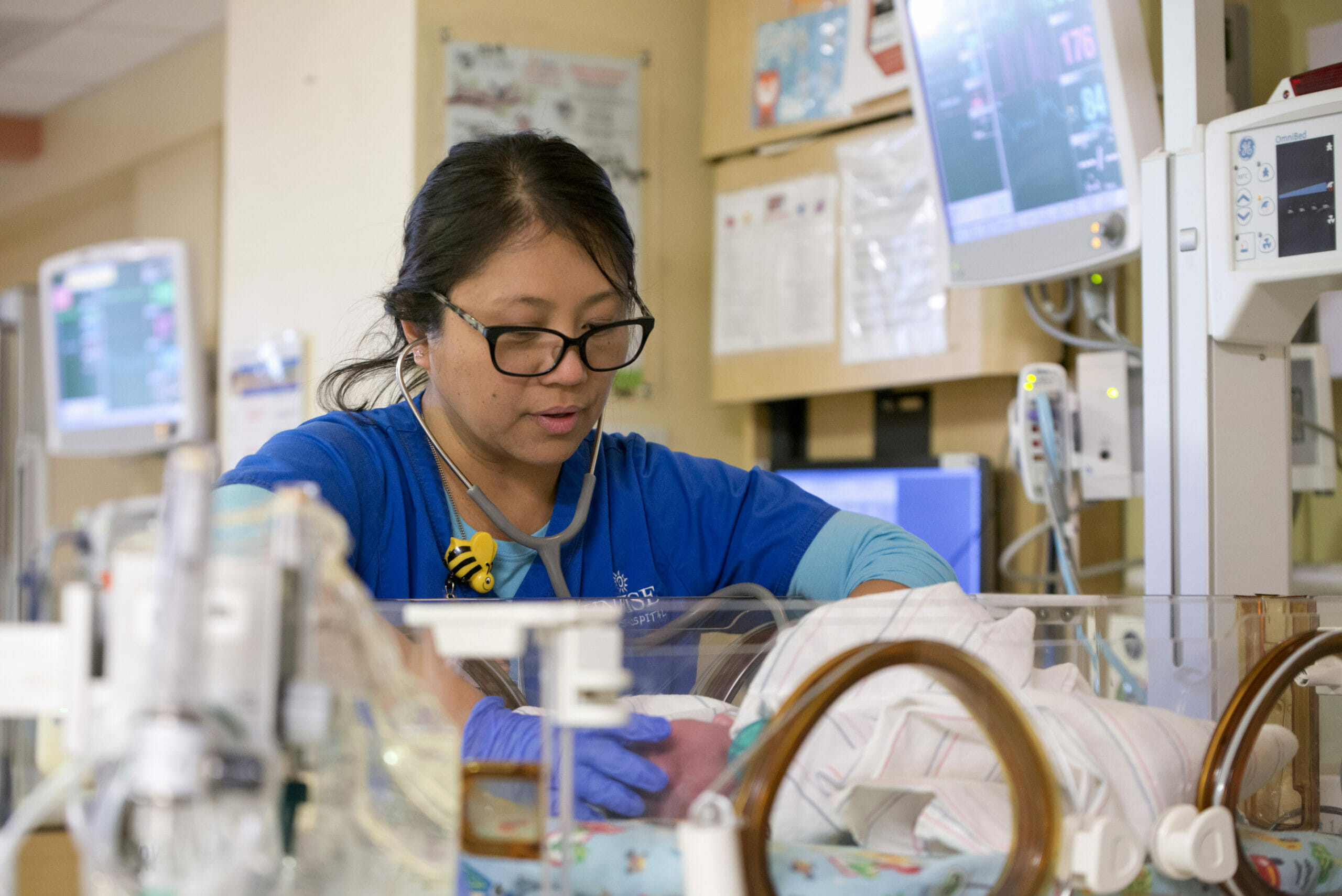 Todd Sklamberg, the CEO of Sunrise Hospital, hovers over a newborn in the neonatal intensive care unit whose tiny plastic cradle is surrounded by an array of beeping machines, 12 different medications and a tank of nitric oxide.

Sklamberg points to the tank sitting at the foot of the baby’s bed. He estimates the hospital is spending $3,300 a day in nitric oxide alone for the infant, more than twice the flat $1,500 per day reimbursement rate the state pays hospitals to care for each baby on Medicaid, like this one, in a neonatal intensive care unit — and not counting the costs of the 12 medications, nurses’ time, the ventilator or the $35,000 bed the baby is lying in.

Within twenty-four hours after birth, the baby also underwent a treatment known as ECMO — extracorporeal membrane oxygenation, a treatment that mimics the function of the heart and lungs — that costs the hospital $6,900 a day.

“You just go down the room, and 75 percent of the babies in the neonatal intensive care unit are on Medicaid,” Sklamberg said in an interview last week. “And we see 1,000 babies in our NICU every year.”

As a safety net hospital, Sunrise provides care to many of Southern Nevada’s sickest and most vulnerable patients — with its children's hospital caring for the youngest of those — but hospital officials say the cost of doing so is taking its toll. If the hospital doesn’t receive additional financial help from the state, Sunrise officials say they won’t be able to continue providing the services they do today nor be able to expand less readily available treatment services, such as ECMO.

It’s neither a new problem nor one unique to Sunrise. Like clockwork, hospitals go before lawmakers each legislative session, talk about the life-saving care they provide to residents and explain why this year they deserve to receive a Medicaid rate bump from the state. They talk about how hospitals are only reimbursed a fraction of the costs — it was 57 percent last session, down to 54 percent according to the latest estimates from the Nevada Hospital Association — and how those payments lag behind those across the nation, where hospitals receive about 89 percent of costs.

It’s a point that Sklamberg said he has made to the hundreds of sitting and prospective lawmakers he has met with and given tours to in his 11 years as CEO of Sunrise. He said 99 percent of them tell him they agree that Medicaid reimbursement rates should be increased, but come the end of the legislative session when lawmakers are attempting to fit the puzzle pieces of the budget together, the money isn’t there.

That’s why the hospital has decided to lean on Nevadans to pressure their lawmakers to action by launching a public awareness campaign called Every Baby Counts NV, including a website focused on the work the hospital does to care for the state’s sickest babies that urges people to contact their lawmakers with a click of a button, as well as a social media campaign on Facebook, Twitter and Instagram. A spokeswoman for Sunrise said the website has already generated 19,000 letters to lawmakers since it was launched last month.

“It can't be business as usual. We can work with our lobbying team. I go up to Carson City 10 times during the session. I've testified multiple times, and I'll do that again,” Sklamberg said. “But there has to be something different or we'll end up going down the same path as what we've done before.”

Sunrise is funding the campaign through a nonprofit called Every Baby Counts NV, though a spokeswoman declined to specify how much the hospital is spending on the campaign. Sklamberg only said that the campaign will “broaden” as the legislative session, which starts on Feb. 4, approaches.

With the campaign, Sunrise is hoping to shrink the $77 million it lost on Medicaid billings last year — which it says is a 91 percent increase in losses since 2012 — though officials aren’t putting a specific price tag on their ask of lawmakers. It attributes that loss to an influx of Medicaid patients into its emergency rooms since the state made the decision to expand Medicaid in 2014.

Although the hospitals supported Medicaid expansion and the dramatic reduction in Nevada’s uninsured rate that followed, they say many new Medicaid patients have been sicker than they anticipated and haven’t always understood the proper point at which to access care, such as a primary care physician’s office. Medicaid patients made up about 42 percent of inpatient admissions to Sunrise and 56 percent of emergency department care in 2017, according to the hospital.

The state boosted reimbursement rates by 5 percent in 2015, but Nevada Hospital Association CEO Bill Welch said that only brought hospitals up to the 57 percent of cost figure. With medical costs continuing to rise and no further bumps, that cost to payment ratio has declined, Welch said.

“It’s not like they’ve reduced our reimbursement, which is fortunate, but we’ve seen increases in our costs and our Medicaid reimbursement is stagnant,” Welch said.

Neither Sunrise nor the hospital association — which isn’t involved with the Every Baby Counts NV campaign but is supportive of raising reimbursement rates — anticipates the state will be able to raise the reimbursements to meet the national level in one fell swoop. But they hope there will be some sort of movement on the issue in the coming session.

“Fifteen years ago, McCarran Airport — the joke in town — best place for health care. Do we want to revert back to that?” Sklamberg said, referring to the joke that Nevadans have to fly out of state to get the best health care. “I would argue that we have made substantial steps in the last 10 years of bringing new services to town to significantly enhance quality, outcome and access. If we want to continue that, that reimbursement has to match that level of acuity, and it's not. It has reached the point of just being continually unsustainable.”

With a new governor and a Democratic-controlled Legislature, the hospitals may face better odds of getting some sort of a Medicaid rate increase this year. Gov.-elect Steve Sisolak called for raising Medicaid reimbursement rates as part of his health-care platform, and legislative Democrats across the state campaigned vocally on increasing access to health care.

State Sen. Joyce Woodhouse, who will again have significant control over the state’s purse strings next session as chair of the Senate Finance Committee, acknowledged lawmakers have sometimes prioritized additional funding for education over health care. But she believes that could change this session with the heavy interest in health care that she and her fellow lawmakers heard talking with constituents this election cycle.

“Maybe it’s because I’m an educator, but always the number one thing seemed to be K-12 education which, it still is way at the top of the list but one of the things we have found is that right now health care and K-12 are number one and number one priorities,” Woodhouse said. “I would say that both have to be addressed because it’s the most important part of what we need to do for our citizens here in Nevada, that they’re healthy and that their children and young people have an opportunity for an exceptional education.”

One of the biggest questions will be whether there is the legislative appetite to devote additional funding to Medicaid in a budget that is swelling to include additional funding for the program unrelated to rate increases. Outgoing Gov. Brian Sandoval’s proposed budget already includes an extra $114 million to account for a reduction in federal matching funds flowing to the program, $107 million to account for an ongoing increased Medicaid caseload, and a $15 million supplemental appropriation to account for both caseload growth and higher-than-expected use of services.

With those additional costs, Medicaid did not ask for any rate increases in the upcoming session as it did in the last one with increases for nursing facilities, adult day health care and assisted living. If rates did increase, the next question would be how — whether lawmakers would pursue an across the board increase or focus on certain areas.

For instance, physicians have also been advocating for overall rate increases particularly as the state tries to attract and retain providers. Catherine O’Mara, the executive director of the Nevada State Medical Association, said that her organization is not involved with the campaign either but is supportive of the overall goal of raising reimbursement rates.

“I do think it’s important for the average person to understand what does it take to ensure that hospitals and physicians are there for you if you have an emergency. It's consistent investment each year that allows a safety net of emergency services to be there when there is a catastrophe,” O’Mara said. “If you chip away at that investment, if you don’t continue to pay physicians what they’re worth, if you don’t cover the costs of a population you’re sending to the hospital, they’re not going to be there.”

It's also not clear whether a Democratic-majority Legislature will chafe at a for-profit hospital whose parent company HCA Healthcare outperformed analysts’ projections for revenue and earnings last quarter, with $11.5 billion in revenue and $759 million in net income, asking for additional money from the state. But Sklamberg said HCA has put a net infusion of corporate dollars and capital into Las Vegas to help with an ongoing expansion of the hospital and described Sunrise’s overall profits as “at the brink” though he declined to release specific numbers.

“It's not giving us money. It's providing access to care, the 24, 25 percent of all Medicaid patients in Clark County in order to have access to care and world class care at Sunrise Hospital,” Sklamberg said. “We're giving money to the tens of thousands to the 90,000 Medicaid patients that come to our ER. That's where the money is going.”

From Medicaid’s perspective, there’s also the question of how a possible transition from a per diem hospital reimbursement rate to one based on diagnosis might address any of the hospital’s concerns. Jared Davies, Medicaid’s chief of rate analysis and development, said Nevada is only one of a few states that still reimburses on a per diem basis and that the state is planning to begin looking into switching to a diagnosis-based system in 2020.

“Moving to a system like that is an advantage overall for the system. It allows us to focus on efficient and effective care,” said acting Medicaid administrator Cody Phinney. “A per diem rate might create an incentive to keep people to get paid and that’s not really the goal. We’re looking to keep people healthy. So that’s the underlying benefit.”

For Sunrise, the overall goal this session is simple.

“To be honest with you, there's not a trajectory,” Sklamberg said. “Success looks like not losing money.”

Updated 12-11-18 at 9:56 a.m. to correct the percentages of inpatient and emergency department visits to Sunrise Hospital. The hospital had previously provided incorrect percentages.