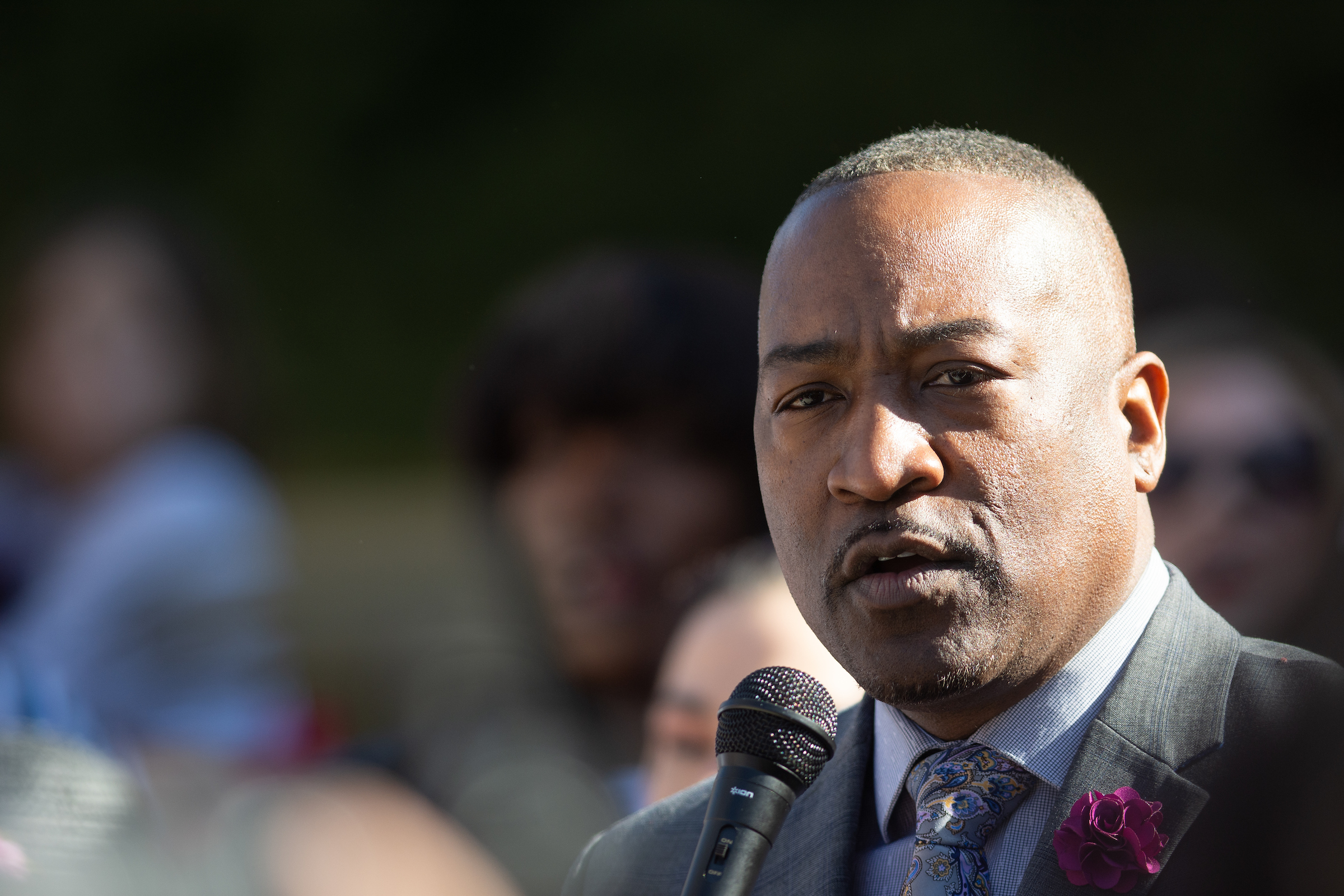 Tyrone Thompson, a four-term Democratic assemblyman and longtime education advocate at the Legislature, passed away early Saturday morning while receiving emergency care at Carson Tahoe Regional Medical Center. He was 51.

Thompson, who chaired the Assembly Education Committee this session, was best known as a tireless advocate on education and homelessness issues. He sponsored several high-profile bills this session to establish a Nevada Interagency Advisory Council on Homelessness and Housing, require schools to take a restorative justice approach before resorting to suspending or expelling a student, and repeal a mandatory retention provision in the Read by Grade 3 program.

“We are deeply saddened by Assemblyman Thompson’s sudden passing,” Democratic Assembly Speaker Jason Frierson said in a statement Saturday morning. “He was well respected by his colleagues in the Legislature for his dedication and leadership. His warm smile and larger-than-life presence will truly be missed in our Assembly chamber. We ask that you respect the privacy of his family at this difficult time.

Frierson later said he was "heartbroken."

"I have never known someone more obviously created in this world to serve others than Tyrone," he said in a text message. "I am blessed to have had him as a dear friend and member of my church family, and also a dedicated member of the Legislature. When Maya Angelou said, 'I've learned that people will forget what you said, people will forget what you did, but people will never forget how you made them feel,' my heart is comforted in knowing that this described Tyrone to anyone who ever met him. He served his church, his community and the state of Nevada with unbelievable passion and the best thing we can do is carry on his legacy in service, especially service to our community's children."

Gov. Steve Sisolak, who ordered flags to half-staff, released a statement: “I am heartbroken by the unexpected passing of Assemblyman Thompson. He spent his career in service to others, and dedicated his life to lifting up and protecting the most vulnerable in our community. They say that no man stands so tall as when he stoops to help another, and Assemblyman Thompson stood larger-than-life because of his selfless service to his fellow Nevadans."

Tributes to Thompson poured in across the ideological spectrum Saturday morning from lawmakers, public education advocates and others, who called Thompson a compassionate, caring legislator deeply dedicated to improving public education.

“We have lost a truly wonderful and caring man and community servant with the passing of Assemblyman Tyrone Thompson,” Democratic Sen. Joyce Woodhouse wrote on Twitter. “We will all greatly miss his infectious laugh and bubbly spirit as he stood up for the students of Nevada and all members of his community.”

Republican Assemblywoman Jill Tolles said she met Thompson in 2015 when “lobbying as a mom,” and said the two immediately hit it off and remained friends.

“He was compassionate & passionate,” she said in a tweet. “His ability to inspire others was evident by the testimony of those he influenced. Tremendous, heartbreaking loss.”

This dear man ⁦@Thompson4AD17⁩ doing what he did best...advocating for children. Thank you Chair Thompson for teaching this freshman at #NVleg what leadership is: class, kindness & fairness. A huge hole in our collective hearts with your passing😞 pic.twitter.com/gO7F5QyQ10

I just heard the unbelievable news about Tyrone Thompson. We lost a good one last night. Tyrone was a true public servant and strong friend of public education. And above all else, he was kind. Sending my prayers to his family and friends, our community, and our state.

In a statement posted to Twitter, Clark County Superintendent Jesus Jara wrote that he was “immensely saddened.”

“He was a tireless advocate for public education, as well as a friend to anyone who speaks up on behalf of children,” he said. “When I first became Superintendent, he called me and offered to take me through his district to meet his constituents. I saw his passion to improve education throughout CCSD, especially for underserved students.”

Thompson also was pushing for a bill to pledge Nevada’s electoral votes to the winner of the national popular vote for president and sponsored a resolution to urge Congress not to ask a controversial citizenship question on the 2020 Census. Other issues he championed during his time in the Legislature include improving services at state-funded resource centers, expanding HIV testing access and passing a “ban the box” bill to end employment discrimination against those with criminal records for government job postings.

In 2017, he sponsored bills to create a Nevada Advisory Commission on Mentoring and to designated Peace Week around Martin Luther King Jr. Day  to encourage Nevadas to “contribute to the creation of a more peaceful, compassionate, knowledgeable and unified State and world.”

Thompson was first appointed to Assembly District 17 in April 2013 to fill a vacancy after former Assemblyman Steven Brooks was expelled from the body. He went on to be elected three times to represent the North Las Vegas-area seat with the overwhelming support of his constituents, winning in 2018 with 66 percent of the vote.

In his professional life, Thompson served as CEO and success coach at Thompson Career Solutions, a workforce strategy and training development company. He worked on homeless initiatives for the Southern Nevada Planning Coalition at the time he was appointed to the Assembly and was later a senior training coordinator at the Clark County Organizational Development Center.

Thompson held a bachelor’s degree in criminal justice from Northern Arizona University and a master’s degree in organizational management from the University of Phoenix. As a kid, he served as student body president at Valley High School.

He was extremely active in his community, serving on several boards and councils over the years including the Interagency Council on Homelessness, the National Forum for Black Public Administrators and the American Society for Public Administrators. He also was a Court Appointed Special Advocate.

Thompson earned several civic awards for his work over the years including the Community Leadership Award at Las Vegas Soul Fest, the President Obama Volunteer Service Award and the Volunteer Center of Southern Nevada Community Enrichment Award and National Points of Light Award.

A Saturday meeting of the Ways and Means Committee, which Thompson sat on, was canceled following the news.