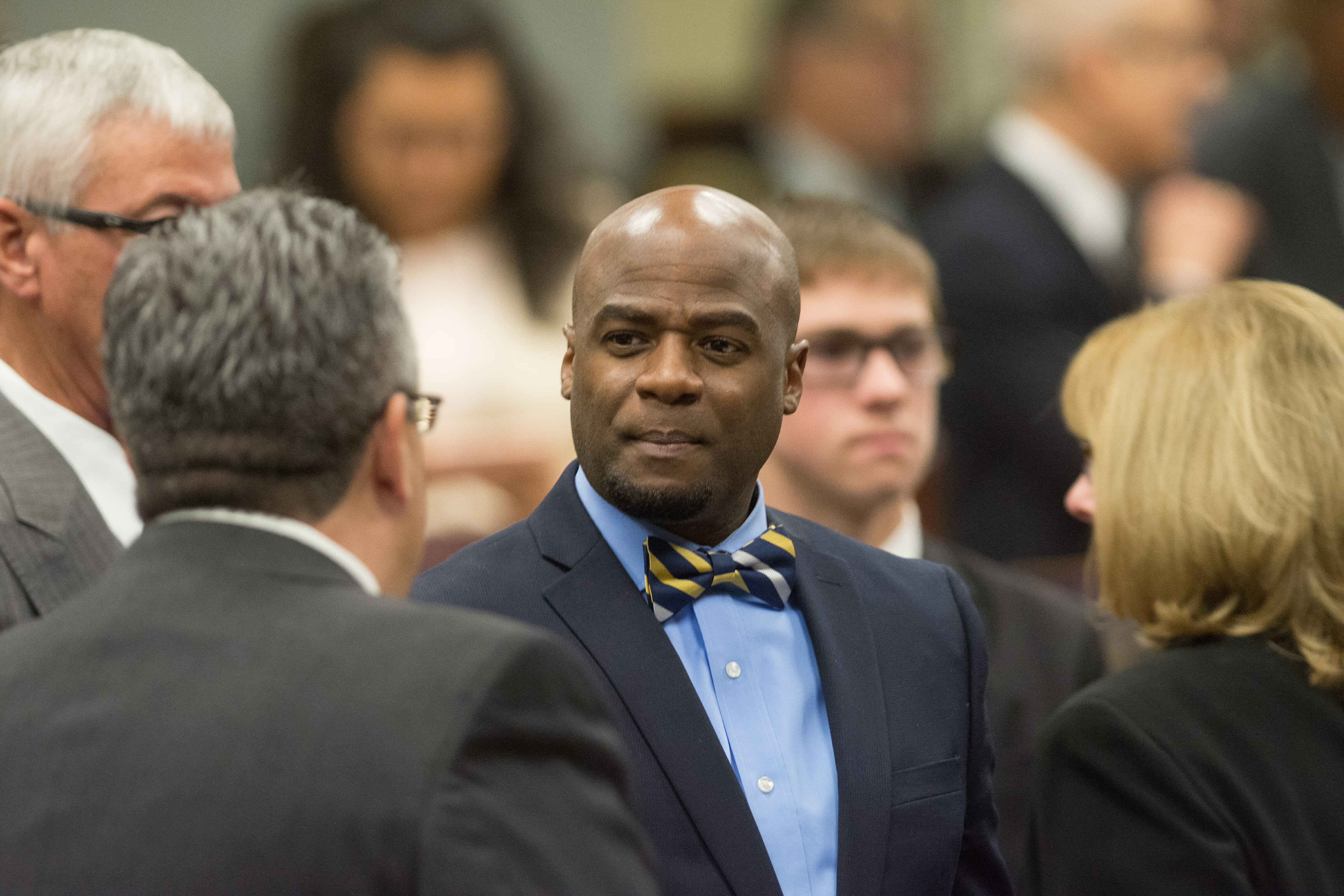 A federal judge on Thursday ordered former Democratic state Senate Majority Leader Kelvin Atkinson to serve 27 months in prison and pay $249,900 in restitution for his misuse of campaign funds.

U.S. District Judge James Mahan also sentenced Atkinson to serve three years of supervised release after he exits prison. Atkinson, who pleaded guilty to one count of wire fraud in March, must report to federal prison by 2 p.m. Oct. 18. The location has not been determined.

Mahan called it a “sad day” given that Atkinson, an elected official, violated the public’s trust. “That’s never pleasant and never happy,” he said.

Atkinson, dressed in a charcoal-gray suit and burgundy tie, expressed similar sentiments when he addressed the judge prior to his sentencing. The former state lawmaker said his actions were “regrettable” and “unfortunate.” He also apologized and acknowledged his embarrassment while vowing to never put himself in a similar circumstance.

“No matter the outcome today, you won’t find me back in your courtroom,” he told Mahan.

Atkinson resigned from the Legislature in early March and, in a tear-filled speech on the Senate floor, announced he would be pleading guilty to misappropriation of campaign funds for personal use. A subsequent plea agreement indicated that he diverted nearly $500,000 from his campaign account, misleading donors in the process, and used $75,000 of campaign funds to help open a downtown bar.

The revelation marked a swift fall from grace for the longtime legislator, who was first elected to the Assembly in 2002. Atkinson, who became the state’s third African-American and first openly gay Senate majority leader in 2019, joined the Senate after the 2012 election.

In a sentencing memorandum, prosecutors recommended the judge give Atkinson 30 months in prison and a fine totaling $249,900. Assistant U.S. Attorney Daniel Schiess urged the judge to impose a sentence that reflected the seriousness of the offense, which he said damaged the Democratic process.

Defense attorney Richard Wright had asked for probation, saying Atkinson’s years of goodwill in the community should balance his wrongdoing. He described Atkinson as a “hard worker” and “good-hearted” person.

Nevada’s U.S Attorney Nicholas Trutanich said “justice was done” on Thursday. Atkinson’s sentence, he said, should serve as a “signal” to other elected officials who may be contemplating illegal acts.

“The message to Nevadans is that they should have trust in their public officials,” he said. “The vast majority of public officials that serve in this state serve with honesty and integrity. There are some that lose their way.”

Trutanich said the sentence took into account the fact that Atkinson “took responsibility quickly” when confronted by law enforcement earlier this year.

The judge also imposed a 60-day stay on the money remaining in Atkinson’s campaign account. Trutanich said he could not disclose the amount of money leftover in that account.