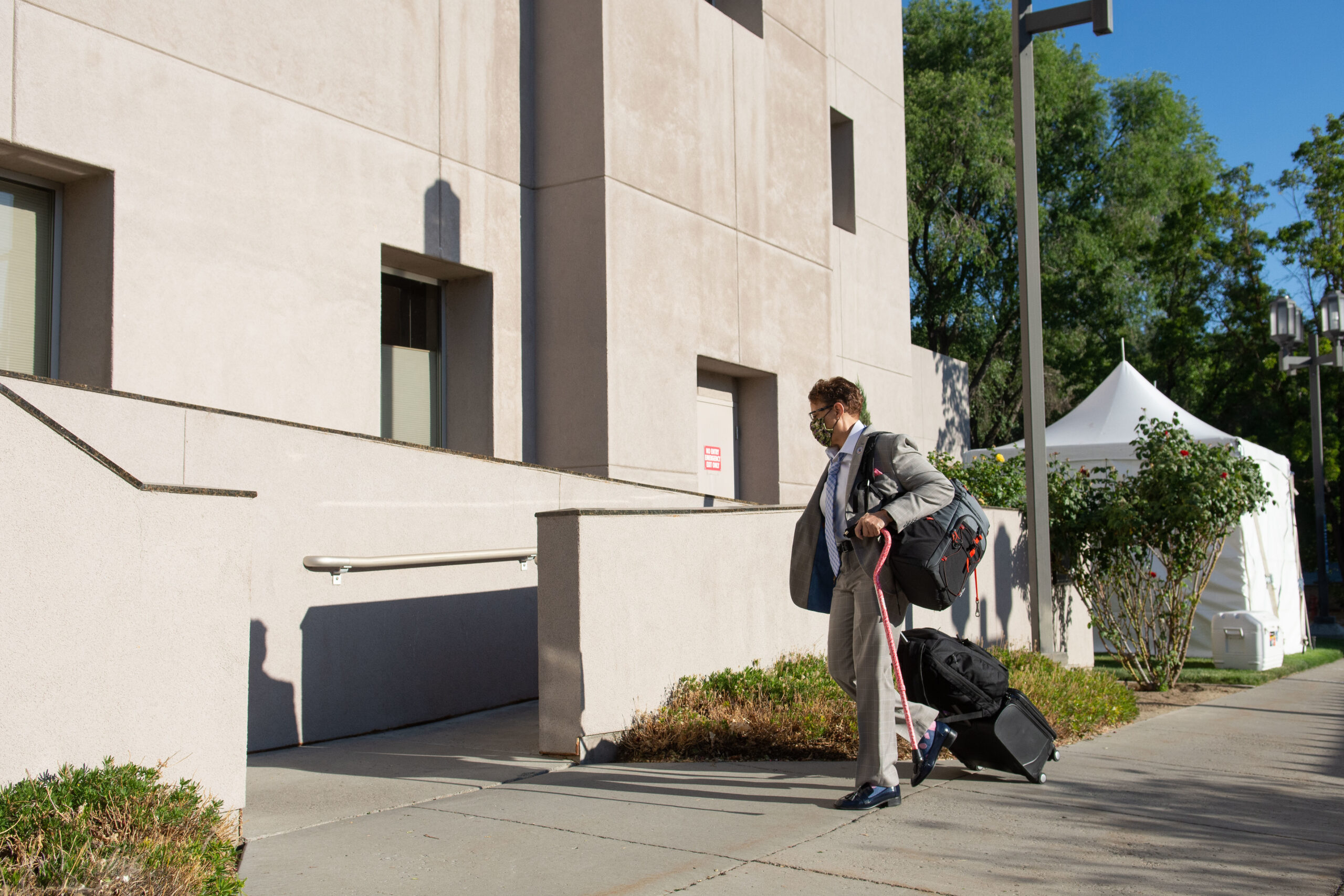 As the Senate eyes a possible second vote on a mining tax deduction proposal that would ease the pain of budget cuts, one key question about the Nevada Constitution has threatened to derail the entire process.

Are lawmakers allowed to vote if they’re not in Carson City?

After one legislator tested positive for COVID-19 at the beginning of the special session, a dozen or so legislators made the request to attend proceedings remotely, including several members of the Assembly and, on the Senate side, Democrat Pat Spearman. The question is particularly relevant in the Senate, where Democrats are one vote shy of a supermajority needed to raise revenue and can’t afford to lose even one vote.

Senate staff confirmed after initial publication of this story that Spearman, who did not respond to multiple requests for comment, is participating from Las Vegas.

But they also referred to an opinion released by Legislative Counsel Bureau General Counsel Kevin Powers on Saturday afternoon stating that the Constitution does not require physical presence in Carson City and doesn’t establish a method for determining whether a member is present.

According to the Nevada Constitution, legislative sessions must be held “at the seat of government of the State,” which is Carson City, but it doesn’t address whether individual lawmakers are allowed to attend that session remotely.

Lawmakers’ absence from the physical legislative chambers has raised legal questions about whether laws passed during the special legislative session are valid — especially for matters that are decided by votes from people calling in by videoconference. Over the past eight days, lawmakers have appeared to attend proceedings from their legislative offices, hotel rooms and, in one case, an RV.

The issue came to the fore during votes late Thursday and early Friday on a bill, AB4, that proposed to remove several mining tax deductions. Because it would generate additional revenue for the state, it requires two-thirds support to pass.

Before the Assembly’s vote on the measure, Republican Leader Robin Titus requested that each member participating remotely state where they were voting from.

When that didn’t happen, she pressed the point again, asking for Democratic Assembly Speaker Jason Frierson’s word that everyone who voted was in Carson City. Frierson’s response was only that there was “nothing in the rules” about that and suggested she talk to the Legislative Counsel Bureau’s legal staff about it.

“We have followed the rules to T,” Frierson said.

The measure passed the Assembly on party lines 29-13, meaning it had one more vote than was necessary to meet the two-thirds requirement, but 12 Democrats voted remotely. The measure failed in the Senate 13-8 along party lines, with Spearman voting from outside the building.

Nearly identical sets of rules approved by both the Senate and the Assembly at the beginning of the special session don’t address the question either. The rules provide for remote voting upon request of individual members but do not specify that the lawmakers must be in Carson City to do so.

The rules also clarify that any member of the Legislature participating in proceedings remotely should be considered present and in attendance “for all purposes.”

And, in fact, the rules themselves make the Legislature’s case for the constitutionality of participating remotely in proceedings. The rules also reference a U.S. Supreme Court decision leaving it up to individual legislative houses to determine whether their members are present when there are no express constitutional requirements.

“The Senate hereby exercises its constitutional and inherent powers and privileges and adopts these Special Rules to: Govern, control and regulate its membership and its internal organization, affairs and management; Ensure its institutional self-protection and self-preservation; and Establish a reasonable method for determining whether a member of the Senate is present at legislative proceedings amid the ongoing and widespread public-health crisis caused by the COVID-19 pandemic in order to keep the legislative process as safe and free as reasonably possible from the extraordinary danger, risk, harm, injury and peril posed by the COVID-19 pandemic,” the Senate’s rules state.

Republicans have chafed at the rule changes from the start. Titus argued on the first day that people who have been sick in the past have been marked as absent and simply haven’t participated in the proceedings, and she didn’t see a reason to change course now.

In the Senate, the rules were adopted on a party-line vote with all Republicans opposed. In speeches, Republicans registered their problems with remote voting and appeared to be laying the groundwork for a legal showdown on the issue that could potentially overthrow close votes.

Republican Sen. Joe Hardy said the practice of being in a common physical location is so important that the Senate sergeant at arms goes looking for members if they aren’t in the chambers when called.

“Our duty as an elected is a sacred trust we have. It’s not convenient. It definitely is a sacrifice of time with my family,” he said. “There’s a difference between a rule, a regulation, a law, and the Constitution. I think the Constitution preempts every other thing we do.”

But Powers said that legislators should be viewed as other officers such as the governor and secretary of state, who are required to keep offices at the “seat of government” but can still perform their official duties from other places.

This story was updated at 3:40 p.m. on July 18, 2020 to add comment about Spearman’s whereabouts and a legal opinion on the matter.