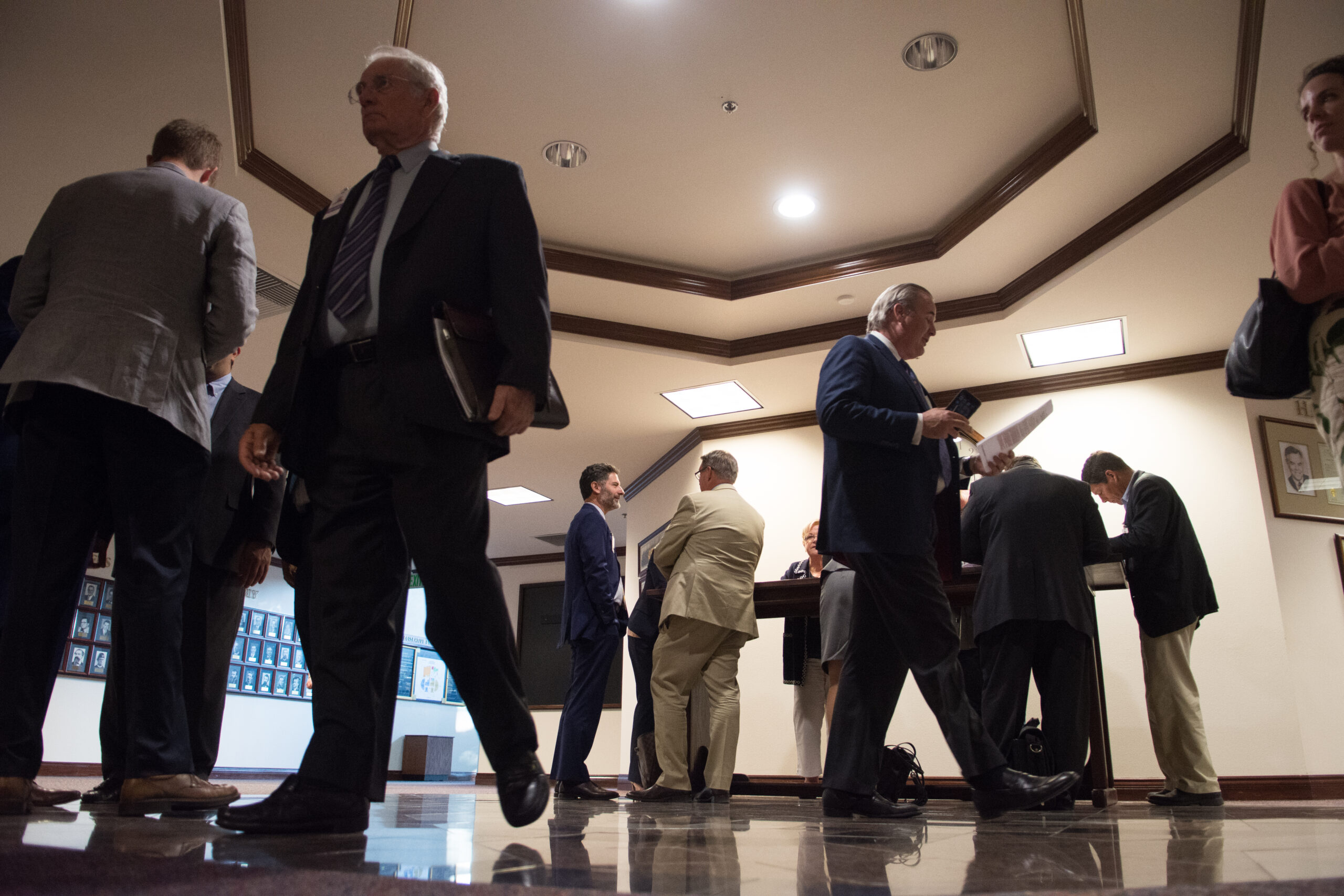 Local governments and cities spent more than $3.9 million lobbying the 2019 Legislature, according to a state report that found total lobbying spending by governments hit the highest amount in more than a decade.

The report, which was compiled by the state Department of Taxation, is the product of a law that requires all local governments — everything from cities and counties to police departments, school districts and hospitals — to disclose any expenditures above $6,000 on “activities designed to influence the passage or defeat of any legislation.”

After hitting a pre-recession high of $3.99 million during the 2007 Legislature, the $3.9 million spent on lobbying activities in 2019 marked the second highest spending totals reported since the disclosure law was passed in 2001 — good for nearly $32,600 of taxpayer money spent every day of the 120-day legislative session.

Local governments, which in some cases have budgets that rival or even eclipse the state’s budget, say that lobbying expenditures are justified given the vast number of bills — law enforcement, open meeting laws, financial administration and public records — that affect counties and cities. But some critics have raised concerns with allowing governments to use taxpayer dollars for lobbying purposes that may go against the wants of the public.

“What governments are promoting or pushing with lawmakers isn’t always in line with what taxpayers or citizens are going to want, and yet, us taxpayers are still funding it no matter what, even if we disagree with it,” Michael Schaus, a spokesperson for libertarian-leaning Nevada Policy Research Institute (NPRI) said in an interview.

Initial reporting of lobbying expenditures were due a month after the end of the legislative session, but following several Nevada Independent requests to top lobbying-spenders, the Department of Taxation revised its report and issued a new version this week.

Under the law requiring disclosure of lobbying expenses, local governments are required to itemize under categories including transportation, salary and wages, lodging and meals, gifts and other entertainment, and to identify the local government budgetary funds that the expenses were charged against.

State lawmakers passed a near-total ban on gift-giving by lobbyists to state lawmakers in 2015, but the amounts spent on lobbying have continued to creep up over the past few legislative sessions.

In the city of Las Vegas, for example, total lobbying spending was reported at nearly $562,000, the highest of any local government. Although the city had nine people registered as lobbyists, according to Legislative Counsel Bureau records, its primary lobbying efforts came from its in-house city-employed team (Ryan Black, Shani Coleman and Kelly Crompton) and a contracted lobbyist; The Ferraro Group, which has an $80,000 contract with the city government.

City spokesman Jace Radke said in an email that numerous other city employees, including city manager Scott Adams, had registered as lobbyists to work on specific issues that affected city governance. He said that the lobbying team “tracked/engaged” on 394 of the 1,157 bills introduced during the legislative session and worked on the three bills introduced by the city (AB5, AB73 and SB11).

Several other top-spending local governments also used a combination of contract lobbyists and in-house employees. Henderson employed The Perkins Company — founded by former Assembly Speaker and former Henderson Police Chief Richard Perkins —  under a $40,000 contract, plus roughly $215,000 in salaries, lodging meals, airfare and other expenses for in-house lobbyists and staff.

Henderson lobbyist David Cherry wrote in an email that the city was involved in a wide number of bills, including measures affecting the school funding formula (SB543), a Southern Nevada working group on homeless issues (AB73), changes to Open Meeting Law (AB70), removing sunsets on the “More Cops” sales tax (AB443) and an advisory ballot question to switch to ward-only voting in Henderson (AB282).

He also wrote that the city opposed an “overreaching” public records bill, SB287, that was supported by civil liberties groups and press organizations, but staunchly opposed by municipalities and local governments. The bill passed after a last-minute amendment to quell the fears of local governments was introduced and adopted on the second-to-last day of the legislative session.

But the behavior of local governments against the bill elicited concerns from groups such as NPRI; Schaus, the organization’s spokesperson, said that the hiring of lobbyists to oppose a bill nominally supported by the public was one of the ways that local governments influence the legislative process

“It’s not like they were out there legitimately representing the interest of the people they ostensibly should be serving, they were there very much pushing their own interests, their own agenda, even when it ran contrary to what most citizens seem to want,” he said.

But high spending totals don’t necessarily translate into a major — or even unified — lobbying presence. Clark County, which spent more than $514,000 on lobbying expenses, had three in-house lobbyists and no contract lobbyists during the session, but the total also includes lobbyists working for the county public defender’s office, district attorney’s office and District Court, each of whose lobbyists often appeared at odds during the legislative session on various criminal justice bills.

County spokesman Erik Pappa said in an email that the county’s lobbying team tracked more than 630 bills throughout the session, and that although the county’s position on most bills was neutral, it still required vast resources to track the many changes made to bills during the legislative session that affect the many regional services — Medicare and Medicaid funding, health care services — that the county offers.

“Even though a position was considered neutral, it was carefully monitored as the title/subject is of interest to Clark County and an amendment at any step of the process could result in shifting County’s position to opposition or support,” he wrote in the email.

Similarly, Washoe County — the local government with the fourth-highest amount of lobbying expenditures at more than $381,000 — reported spending more than $230,000 on employee salaries to lobby the state Legislature, plus $126,000 in contracts with outside lobbyists (Lewis Roca Rothgerber, Christie’s Alfredo Alonso, Lisa Gianoli and Crowley & Ferrato).

But those totals include lobbyists for multiple branches of the county — more than 20 county employees reported lobbying at some during the session, throughout nine different county departments from the district attorney’s office, sheriff’s office, public defender’s office and even animal control.

“During this session, Washoe County monitored and/or worked on almost 70 (percent) of the bills introduced during the session with a total of 301 bills that passed and were signed by Governor Sisolak which had (an) impact on the county,” county spokeswoman Amy Ventetuolo said in an email.

Even some smaller local governments had a lobbying presence in Carson City. White Pine County, with a population of around 10,000 people, spent nearly $14,000 to hire a lobbying company (The Perkins Company) during the legislative session.

White Pine County Commission Chairman Richard Howe said the decision to hire lobbyists stemmed from one issue; the inability of the county to get the state to pony up funding for an updated county courthouse. The county’s courthouse was built in 1908, and since at least 2003 the county has sought funding for a new courthouse with improved security features to better facilitate the hearings and trials that arise from incidents at Ely State Prison, which houses nearly 1,000 prisoners.

According to documentation provided to lawmakers, the current courthouse’s lacking safety features — prisoners use the same elevator and bathroom as members of the general public and court employees, and the holding cell is in a staff break room — presented a danger to both court employees and the public, as a public library, middle school and senior center are across the street from the courthouse.

An appropriations bill (SB149) sponsored by rural Republican lawmakers giving the county $10 million for a new courthouse got a hearing but failed to ever advance out of a budget committee. But in the waning hours on the last day of the session, members of the Assembly budget committee unveiled an amendment allocating $53.7 million in last-minute spending — including $5 million for a courthouse in White Pine County.

Howe credited the county’s lobbyists, the Perkins Group, for getting the funding in at the last minute (Mari St. Martin, former Gov. Brian Sandoval’s press secretary and lobbyist for The Perkins Company, is an Ely native) He said that the county was able to move some funding around and begin construction on the new courthouse last week — something that wouldn’t have been possible without the state funding and without having a lobbyist present during the legislative session.

“White Pine invested a small amount of money...and got a $5 million return. We got nothing over the other years. We got a lot of lip service, but no actual hard dollars,” Howe said. “We used our heads, and we accepted the fact that there’s some things we can’t do, that other people are smarter and better at it than us. Using a lobbyist, you spend a dime to make a dollar.”