Those promises came in the form of the third iteration of the “Nevada Blueprint,” a broad policy wishlist highlighting the priorities of legislative Democrats presented by Assembly Speaker Jason Frierson and Senate Majority Leader Kelvin Atkinson on Monday. Though none of the priorities listed on it are new, the document summarizes progressive policy goals espoused by lawmakers and Gov. Steve Sisolak into one place.

Unlike the 2015 and 2017 iterations of the “Blueprint” which contained pie-in-the-sky proposals unlikely to be signed into law by a Republican governor, the 2019 version represents a likely roadmap for which policy areas Democrats will prioritize this legislative session. The six issues highlighted by Democrats in the document include education, health care, economic security, keeping a “business-friendly climate,” security, a “fair system for all” and renewable energy and environmental issues.

“Nevadans are expecting us to deliver on meaningful results,” Frierson said during a Monday press conference. “In the weeks coming ahead, we're going to break ground on legislation that will do several things, that will provide greater economic success for Nevadans, introduce new resources for improving our public schools, it will expand access to high quality and affordable health care and it will promote a cleaner environment and make our community safer.”

Few of the highlighted policy areas include specifics, such as broad calls to increase the minimum wage, increase the state’s renewable portfolio standard and address surprise emergency room bills from hospitals. Atkinson and Frierson also declined to answer specific questions on the policies, saying it was the fourth week of the Legislature and that it would take time for details on specific bills or policy ideas.

During the press conference, Frierson bristled at suggestions that Republicans were upset with the legislative process, saying when the tables were turned in the 2015 session, Republicans used their majority to “demolish” the construction-defect industry through introducing bills as emergency measures and rushing them through the legislative process.

“You can lead and be effective in the minority,” he said. “But it’s not by sitting back and lamenting the fact that you’re in the minority. It is sitting down with the majority party and engaging in a meaningful way so we can have conversations about middle ground and common ground.”

Some of the priorities included in the blueprint were touted by Sisolak during his State of the State Address, including allowing state employees to collectively bargain, creating the Governor’s Office for New Americans, expanding women’s access to health care and teacher pay raises. Sisolak has proposed $242 million in funds for the pay raises and $6 million for family planning services in his two-year budget.

Pressed about whether the Office for New Americans would serve undocumented Nevadans, Sisolak said last month that prominent DREAMer immigrant Astrid Silva would be welcome at the center. But Atkinson expressed less certainty at the press conference.

“Undocumented, I don't know if that's the case,” Atkinson said.

Others already have bills tied to them. A promise to “make college more affordable” may be addressed through the Senate Education Committee’s proposed Battle Born Opportunity Grant, a need-based scholarship for university students, while Assemblywoman Daniele Monroe-Moreno has proposed legislation to ban private prisons.

The document also embraces some specific proposals that either failed to pass in previous legislative sessions or were vetoed by former Gov. Brian Sandoval, including a ban on private prisons, earned paid sick days, collective bargaining for state employees, restoring the prevailing wage on school construction projects, building a “community-based solar energy program” and raising the renewable portfolio standard. 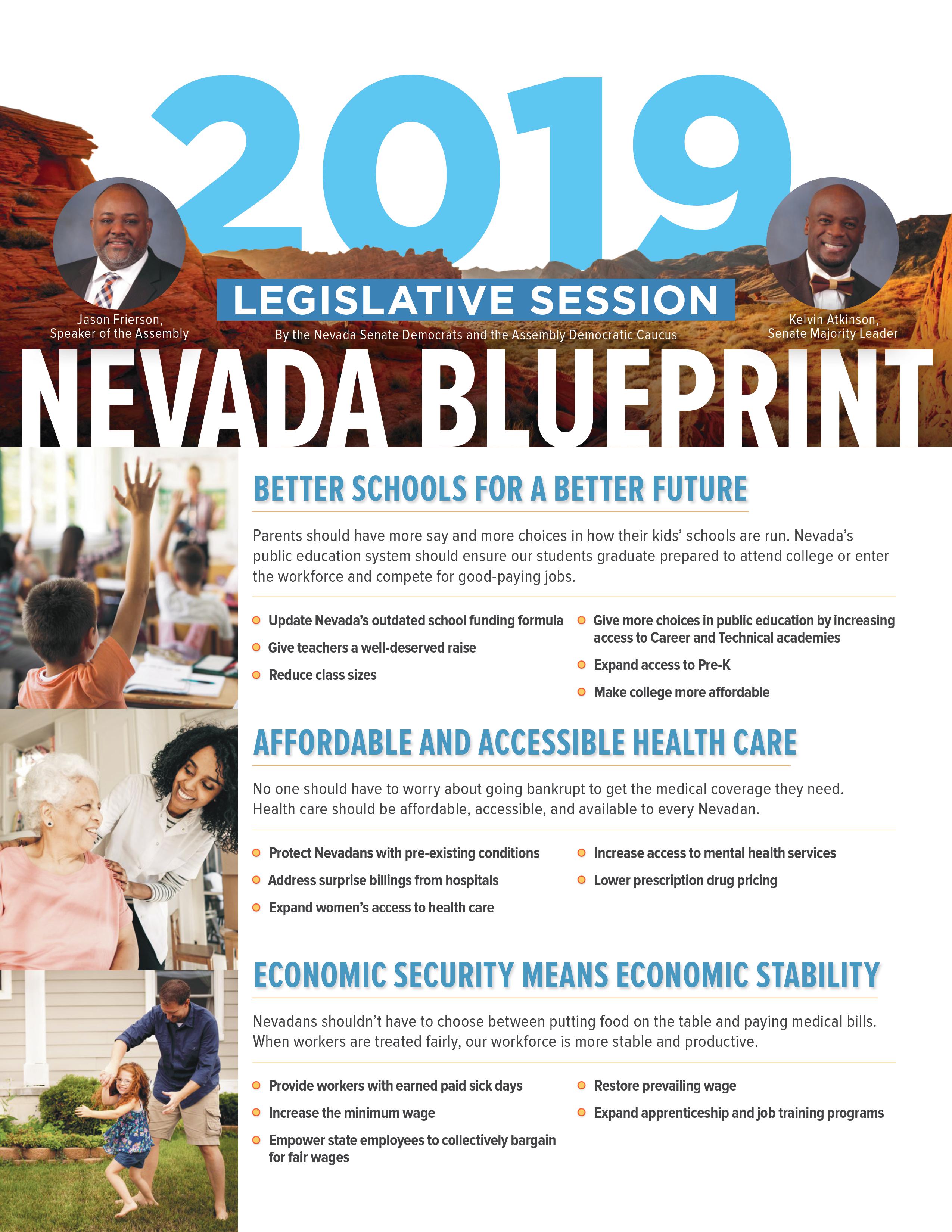 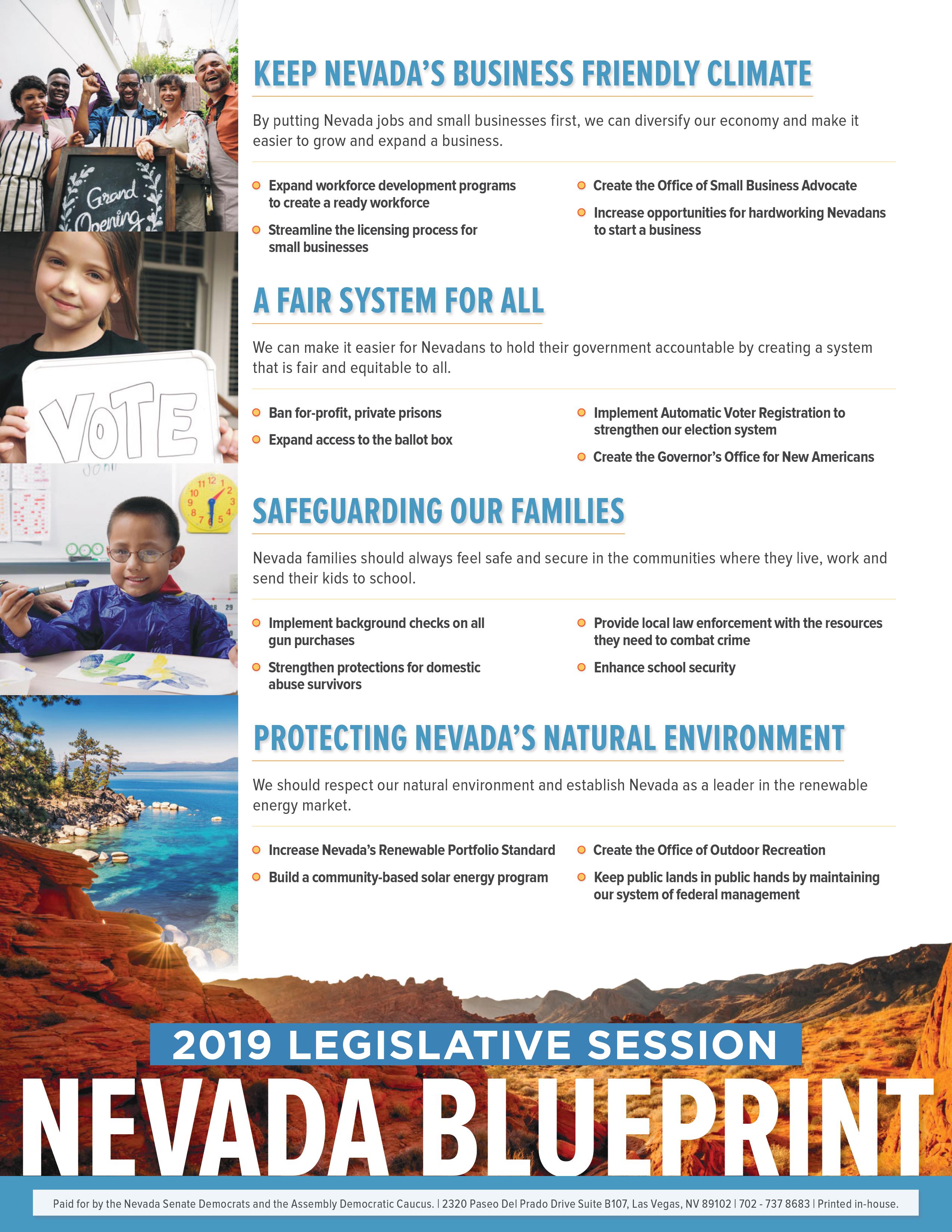 Updated at 1:18 p.m. to add details out of a press conference.