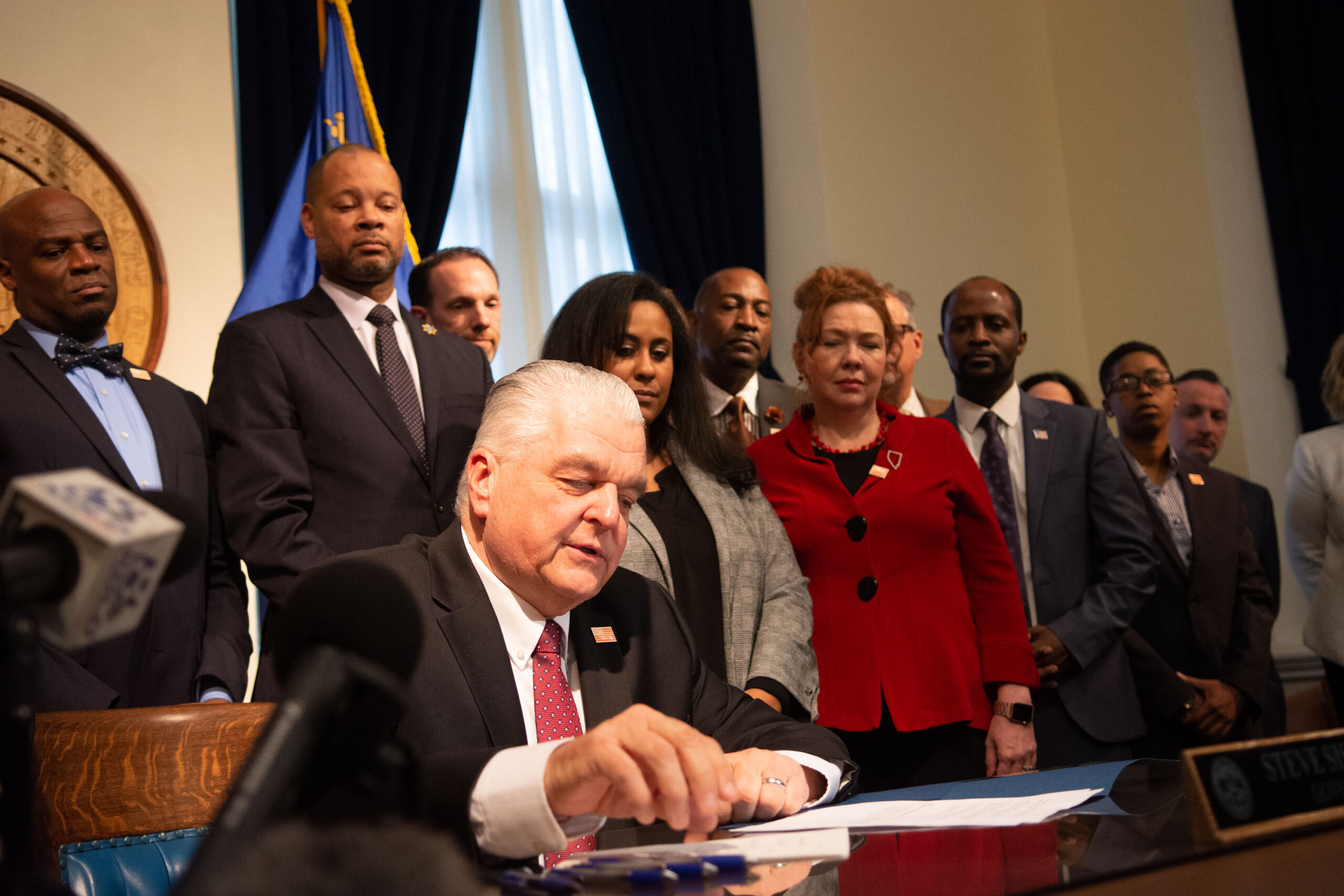 A long-stalled proposal to require background checks on almost all private gun sales and transfers will finally be implemented next year after a marathon week of debate in the Legislature concluded with Gov. Steve Sisolak signing it into law on Friday.

Members of the Assembly split on near-party lines as the chamber granted final approval to the measure on Friday, marking the first major legislative victory for Sisolak and Democrats who campaigned on the issue and culminating a seven-year process that included attempts to bring such a measure to fruition legislatively in 2013 and through the ballot initiative process in 2016.

Speaking with reporters after signing the bill, Sisolak said he was disappointed that no Republicans voted in favor of the legislation but stressed that it would finally implement a measure approved by voters more than two years ago.

“It’s important to remember that this was the will of the voters,” Sisolak said. “This isn’t something that somebody just proposed. The voters wanted this to be passed, so we finally passed it. It was a long time coming, and I’m glad it finally happened.”

The bill, SB143, largely replicated a 2016 ballot initiative approved by voters requiring background checks to be conducted on the vast majority of private gun sales and transfers, with some exceptions for family members, law enforcement, antique guns, while hunting or trapping or if a person is in immediate danger. The initiative was narrowly approved by voters but has stalled amid an ongoing refusal of the FBI to conduct the background checks, solidified in an opinion issued by former Attorney General Adam Laxalt in December 2016.

The new legislation, which requires the state to conduct the background checks instead of the FBI, will take effect on Jan. 2, 2020, following a legal prohibition on amending voter-approved initiatives less than three years after they were approved. Violations of the new law will result first in a gross misdemeanor with additional violations punishable by a Category C felony.

The bill signing quickly followed the Assembly’s passage of the bill, which lawmakers approved on a 28-13 vote after roughly a half hour of passionate speeches from the floor by lawmakers on Friday morning. Assemblyman Skip Daly was the only Democrat to join Republicans in opposition of the legislation, while Republican Assemblyman John Hambrick was absent for the vote.

After the bill was introduced on Monday, members of the Senate and Assembly Judiciary committees heard hours of emotional public comment on the bill from both supporters and opponents of the legislation in a nearly eight hour-long committee hearing on Tuesday. The Senate passed the measure on a 13-8 party line vote on Wednesday after spirited and emotional testimony on the bill on the floor, setting up Friday’s vote in the Assembly.

Daly, who also cast a no vote on a similar measure requiring background checks in 2013 and said he wasn’t an “anti-gun Democrat”, said in a brief interview that he voted against the bill over concerns with its definition of transfer and the fact that his Northern Nevada Assembly district — which has more registered Republicans than Democrats — voted against the measure by more than 18 percent in 2016.

“When we’re here, we represent the state and various things, but you also want to listen and keep an ear to people that in your district,” he said.

In speeches from the floor, Republican lawmakers reiterated their concerns with the legislation, including that it would prohibit otherwise innocuous transfers of guns between certain extended family members and neighbors. Assembly Minority Leader Jim Wheeler expressed concern that he wouldn’t be able to lend a gun to his elderly neighbor for protection in the event that there is another spate of murders like the deaths of two Gardnerville women last month.

“If that happens again after SB143 takes effect, I would have to get her a background check to loan her that firearm,” Wheeler said.

Wheeler did, however, commend Assembly Speaker Jason Frierson for not suspending any of the chamber’s rules in order to move the legislation forward.

Democratic Assemblyman Howard Watts, who described himself as a hunter and “responsible firearm owner,” continued to argue that the measure wouldn’t overly burden gun owners. He closed his remarks by listing the names of the 17 victims killed in a mass shooting at high school in Parkland, Florida — two years and one day ago.

“I am confident that closing this loophole will reduce gun violence in our community,” Watts said.

Gun control advocacy groups and Democratic lawmakers lauded Sisolak’s signature on the bill, including the Brady Campaign, Rep. Susie Lee and Moms Demand Action. In a joint statement, the former co-chairs of the 2016 ballot initiative campaign Elaine Wynn and Jan Jones said the bill signing “has been long awaited and worked for.”

After the bill was signed, Sisolak demurred when asked by reporters if he would push for other gun control measures previously promised on the campaign trail, including banning bump stocks, silencers and assault weapons. He did say that the approved measure would not have a “significant” fiscal impact on the state and promised to defend the law if it was challenged in court.

“Whatever happens, we will defend this bill to the tilt,” he said.