Despite moderate stances, Sandoval issued most vetoes in Nevada history 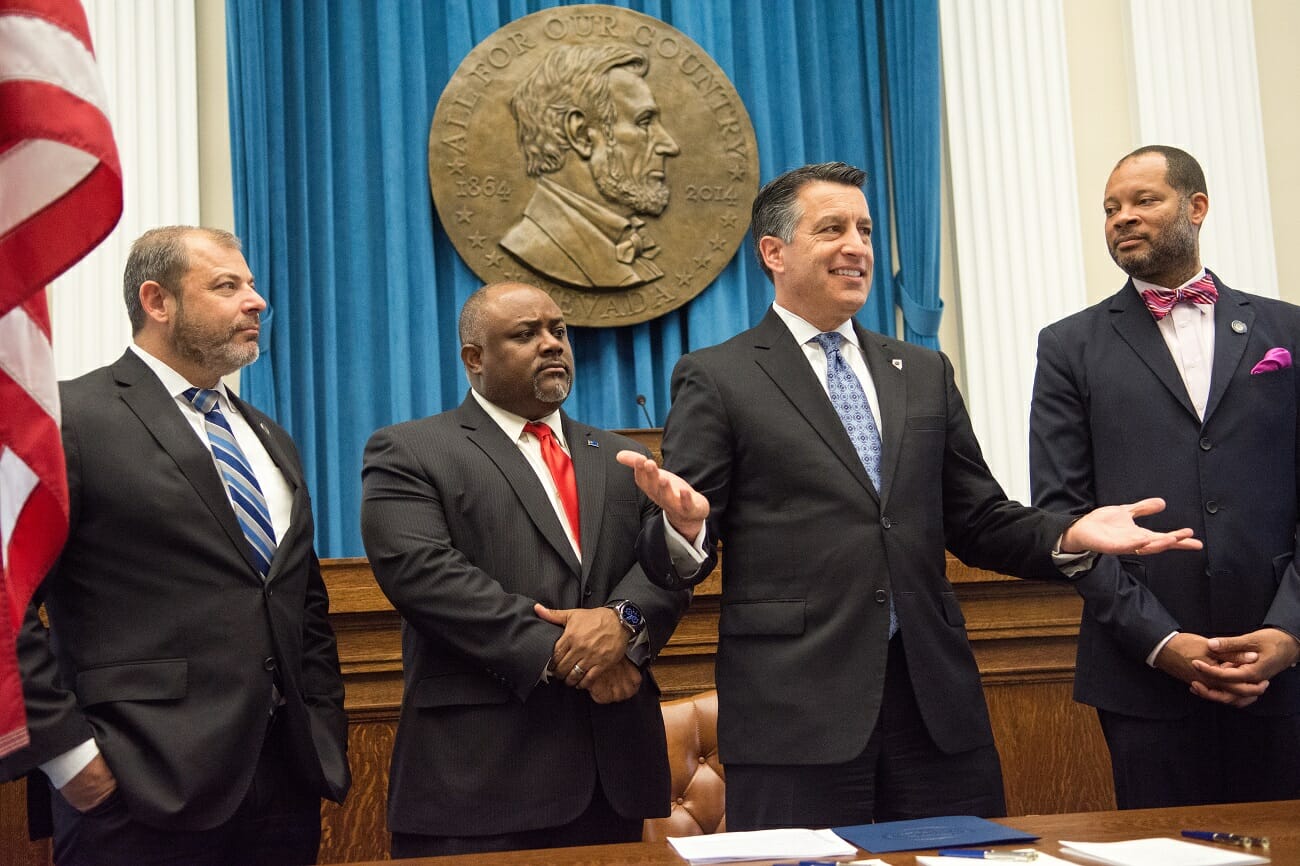 Despite a record of generally moderate policy stances and bipartisan compromise through his two terms, Gov. Brian Sandoval will now go down in state history as the Nevada chief executive who vetoed the most bills.

The 41 measures officially rejected by the Republican governor this legislative session make up the second-highest veto total out of a single 120-day session of the Legislature since Gov. Jim Gibbons vetoed 48 bills during the 2009 session. But Sandoval’s 93 vetoes over his seven years in office bests the previous record of 56 held by Gibbons — who only held the governor’s post for a single four-year term, and had lawmakers override 25 of his vetoes.

Known as a moderate executive with generally non-dogmatic stances, Sandoval's high veto totals came primarily out of the three Democratic-controlled regular sessions during his two terms as governor — 28 vetoes in 2011 and 17 in 2013. His lowest veto total, seven, came out of the Republican-controlled 2015 legislative session. None of his vetoes have ever been overridden.

Despite the high number of vetoes out of the 2017 session, Sandoval ultimately ended up signing 608 bills out of the 649 sent to his desk into law, roughly 40 more than any other session. In the three previous sessions, the Legislature sent anywhere from 556 to 570 bills to his desk for approval.

In a statement, Sandoval spokeswoman Mari St. Martin noted that the governor had signed more than 2,100 bills since he first entered office and that 2017 was his most productive session by the sheer number of bills signed into law.

“While he has a track record of working with anyone from any party, the governor is a Republican and it shouldn’t be surprising that he has different priorities than a legislative body that has two Democratic leaders,” she said. “Most of the bills he vetoed were rollbacks from the 2015 session or policies that he had publicly or privately expressed that he would not likely support. During his four regular sessions, Governor Sandoval has worked with four different Senate majority leaders and four different speakers of the Assembly, which amounts to eight different sets of priorities.”

Only two governors since 1899 have completed a legislative session without vetoing a single bill — Democratic Gov. Mike O'Callaghan in 1975 and Republican Gov. Kenny Guinn in 2003.

Nearly half of the vetoed bills were identified and promoted as part of legislative Democrats’ “Nevada Blueprint” agenda, including efforts to reform the criminal justice system, raise the minimum wage and other progressive policy goals.

Had the governor reached a deal with Democrats to restart the state’s stalled Education Savings Accounts program — something Republicans wanted — there might have been fewer vetoes, said David Damore, a political science professor at UNLV. But he also noted that the governor indicated early on in the session that he wouldn’t sign bills with partisan votes.

“It’s the way the system is supposed to work, particularly when you have divided government,” Damore said. “I think there were some things that Democrats had on their wishlist that the governor was never going to accept. When ESAs went down, they won — but they lost on some of the other bills.”

For a full list of the bills vetoed and signed by the governor, check out The Nevada Independent’s bill tracker.

Here are some highlights of bills Sandoval vetoed in 2017, as well as a comparison to the numbers of bills vetoed in previous sessions and under previous governors.

Most vetoes by session:

Most vetoes by governor:

Late-vetoed bills that could return:

Overriding the governor’s veto takes a two-thirds majority of both houses of the Legislature, not currently possible with the 12-9 majority Democrats have in the Senate and 27-15 advantage the party holds in the Assembly. That means that bill that were vetoed by the governor before the end of the legislative session were laid to rest for the last time.

However, bills that Sandoval vetoed after the end of the legislative session won’t go back to the Senate or Assembly for a possible veto override until 2019 — after the next election. Here’s a look at some of those bills that could possibly see another day.

AB303: Private prisons ban — Sandoval said that the legislation “improperly encroaches on the authority” of the executive branch by banning the state from contracting with out-of-state private prisons beginning in 2022. He said there is “no way to predict whether private prisons may need to play a critical part in Nevada’s future prison needs.

AB106: Increasing the minimum wage to $12 — The governor rejected this measure to raise the minimum wage to $11 or $12 an hour, depending on whether the employer offers health insurance, saying that the bill would “place a significant burden on the state’s small business employers at a time when they are emerging from a downturn that cost hundreds of thousands of jobs and closed the doors of businesses across the state.”

SB427: Minimum size for train crews — The governor vetoed a measure to require a minimum of two crew members of any freight train moving through Nevada, saying that he shared concerns about rail safety but noted that collective bargaining agreements already require two-person minimum cres in the state. He also noted the role that autonomous technology could play on railways in the future.

AB382: Controlling out-of-network emergency room bills — Sandoval said that this bill, which would’ve set up a process for negotiating a lower rate when patients accidentally end up at a hospital or with an emergency room doctor out of their insurance network, would disrupt the balance in the health care market and force hospitals and doctors to accept below-market payments. He said the bill would “likely lead to doctors leaving Nevada, making the state’s critical doctor shortage even worse.”

SB464: Project-labor agreements — The governor vetoed this bill that would have allowed people overseeing the planned Las Vegas Convention Center expansion to require contractors to hire union labor. He said that the measure, which passed on party lines, would “roll back a reasonable reform” enacted by the 2015 Legislature.

AB348: Sex education — Though Sandoval acknowledged that “relevant and appropriate sex education supports important public health policies,” he said the bill — it would have allowed parents to opt-in to sex ed for their children either for the school year only or for as long as the child remains in the school district — undermined the role of parents in the process. He said that the legislation makes it more likely “that a busy parent may be consenting to much more than he or she expected.”

AB376: Stricter deadlines for filing criminal complaints — The governor vetoed a bill that would have required criminal complaints to be filed within 72 hours after the arrest, a timeframe that could be extended an additional 72 hours if good cause is shown. He said that the bill was well intentioned but that “a forced release of a defendant due to these new restrictions could endanger public safety.”

AB175: Minimum wage and health insurance — Sandoval said this measure, which would have required employers who pay workers a $7.25 an hour minimum wage to offer health insurance plans equivalent to a “bronze” level under the Affordable Care Act, would “jeopardize” the state’s economic recovery. He said that imposing a “rigid, statutory definition” on “health benefits” could upset “the careful, incentive-based balance that Nevada’s voters approved in 2006.”

AB259: Marijuana record sealing — A measure that would have allowed people with convictions for minor marijuana possession to clear their records was vetoed by Sandoval, who criticized the measure as well-intentioned but ultimately too broad. The governor noted that he signed other bills this session easing the record-sealing process, and said that such crimes should be reviewed on a case by case basis.

AB407: Designating UNLV as a land-grant university — Due to “substantial risks” associated with roping in UNLV and the Desert Research Institute as “land-grant universities,” Sandoval vetoed the measure due to concerns that it could split federal funding and “decimate” existing agricultural programs at UNR. The governor said that approving the bill could lead to damaging a “system that has been working for over a century without any guarantee that such a seismic change would improve programs and not dilute them.”

AB374: Universal buy-in for Medicaid — A major health care policy experiment that aimed to allow anyone, regardless of income, to buy into a Medicaid-like program was vetoed by Sandoval over concerns that the bill would merely lead to more access to insurance without addressing the “coverage gap.” The governor said that the “assumptions” made in the bill did not provide a necessary basis to “adopt such a dramatic shift in health care policy.”

AB408: Codifying parts of the ACA in state law — While saying the bill had merit, Sandoval ultimately vetoed an attempt to codify portions of the endangered federal health insurance law in state statute, saying that locking down such requirements could lead to the state having to follow potentially “unnecessary, imprudent or simply unaffordable” provisions of the law. The governor noted that he signed similar bills locking in protections for preventive health coverage for women during the 2017 session, but said AB408 “extends far beyond the targeted reach of those bills.”

SB392: Community Solar Gardens — Like other vetoed renewable energy bills, Sandoval said he supported the general concept of allowing entities to offer distributed solar to low and moderate income Nevadans in a vacuum, but that the uncertainty related to a 2018 energy deregulation ballot question made him want to err on the side of caution. He said that the bill would essentially allow for the “gardens” to operate as utilities within utilities, but without existing oversight and consumer protections

AB206: 40 percent Renewable Portfolio Standard by 2030 — Sandoval said he supported the concept of the bill, but was concerned about how it would interact with a pending ballot measure  that would restructure the state’s energy market and could lead to a “risk of increased rates” for customers.

Caption: Gov. Brian Sandoval and legislative leaders on the final day of the Legislature. Photo by David Calvert.