In fight over renewable energy standards, some lobbyists represent both sides 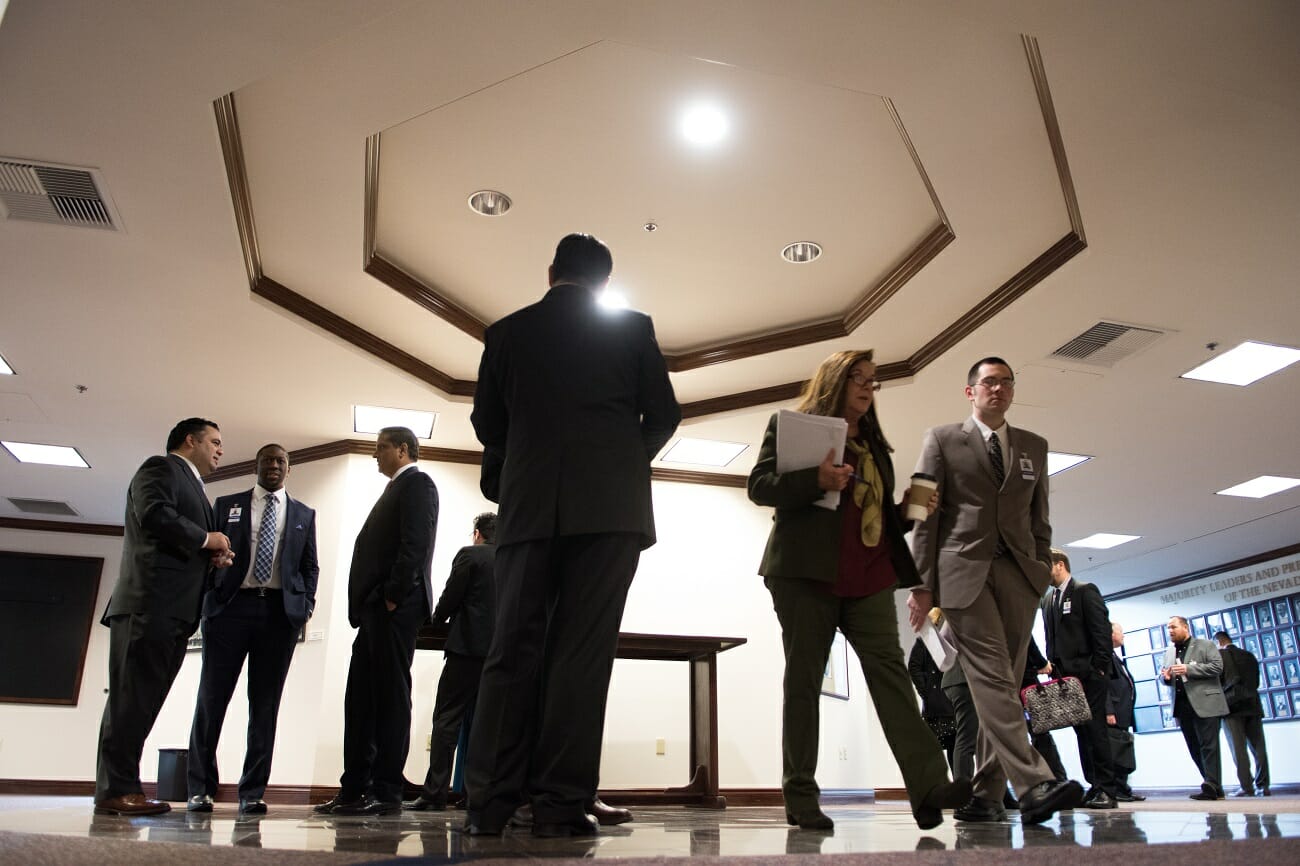 No matter the issue, the same power players dominate nearly every major policy discussion in the Legislature.

It’s the same case in an ambitious proposal to double Nevada’s Renewable Portfolio Standard — the amount of energy that has to be generated by renewable sources —  to 50 percent by 2030, with a goal of 80 percent by 2040.

After heavy lobbying and several significant amendments, AB206 passed out of committee last week and will likely be voted on the Assembly floor in the next few days. In a session full of wide-ranging energy measures also set against the backdrop of a ballot measure that is designed to fundamentally restructure the state’s energy market by 2023, the bill has become one of the most lobbied and discussed measures of the 2017 session.

Part of the reason is because the bill would have an outsized effect on some of the state’s largest businesses. That’s because it requires so-called 704B companies (named after the provision in state law) that have filed to leave the regulated grid and purchase power on the open market to follow the higher renewable standard. MGM Resorts, Wynn Resorts, and Switch have all left NV Energy’s monopoly in the last year after paying multi-million dollar exit fees.

There are a lot of major companies and interested parties seeking to influence the legislation, but only a handful of influential lobbying firms to go around, meaning some clients find themselves sharing advocates with businesses or groups on the other side of the bill.

Democratic Assemblyman Chris Brooks, the sponsor of the renewable standards bill, said he’s become frustrated at some of the overlapping conflicts from lobbyists, several of whom represent clients with opposite stances on the bill.

“How do you really know who you’re talking to, and how do they keep those interests straight and how do they keep from leveraging issues and leveraging their clients against each other to make more money? I don’t know,” he said. “That’s inherently part of a problem in a small state, but it in my opinion has made things a little more difficult to have open and honest conversations about individual issues because of the fact that there’s just so much overlap and conflicting interests in this conversation.”

Adding fuel to the fire is the fact that energy-focused companies gave nearly half a million dollars to lawmakers during the 2016 election cycle, led by NV Energy ($158,500), SolarCity ($82,500) and major geothermal generator Ormat Nevada ($63,000).

Below, we’ve mapped out several of the major players in the debate over the bill, and any potential conflicts that have arisen.

MGM, Switch, Tesla, Barrick and SolarCity all have a few things in common — they’re deeply affected by any changes to state energy policy, and they all share a lobbying firm — The Griffin Company.

The firm, which is led Josh, John and Matt Griffin, has at least nine registered lobbyists this session and 36 clients. They also played a key role in writing and running the campaign supporting Question 3: the Energy Choice Initiative.

Matt Griffin, a partner with the firm and author of the ballot initiative, told the state’s energy choice commission in late April that the Energy Choice Initiative wasn’t taking a position on any of the pending renewable energy bills in the Legislature. But several of the firm’s clients have come out in favor of the legislation.

Barrick, which wouldn’t be required to comply with the RPS standards in the bill because it left the grid before 2012, sent a letter last week to legislators supporting the measure as amended. Tesla, through another lobbyist, went on the record supporting the bill during an initial hearing in March.

Switch and MGM have yet to publicly comment on the bill. John Griffin said on Friday that the firm isn’t representing MGM on energy issues this session.

Other casino giants have been much less friendly to the bill, which would require any business that “leaves the grid” and purchases or produces energy on the open market to follow the RPS a standards. During an April hearing, representatives from Wynn Resorts, the Las Vegas Sands and the Nevada Resort Association all went on the record opposing the measure over concerns with meeting the renewable standards in a post-Question 3 world.

“Given the importance of this matter, we applaud Assemblyman Brooks’s objectives and will continue to work with him on these very important issues, but we cannot as employers and large energy users support this bill as written,” NRA president Virginia Valentine said in a letter at the time.

Renewable energy proponents have complained that many of the major casinos and businesses who bankrolled the campaign supporting Question 3 in part sold the ballot question as a way to introduce more renewable electricity into the state, pointing to a set of principles released by Nevadans for Affordable Clean Energy Choices that specifically calls for an 80 percent RPS by 2040.

Many of the contract lobbyists who represent major casinos also represent clients with a pointed interest in Nevada’s energy future. Other firms represent multiple clients supportive of renewable energy. These include:

Some firms recognized the potential for conflict and moved to avoid it.  Brownstein Hyatt Farber Schreck, a full-service law and lobbying firm, previously represented both Wynn Resorts and Green Tech Action Fund, a clean energy grant-making organization that is affiliated with the Energy Foundation, a pro-renewable energy philanthropic group. The firm dropped Green Tech after Wynn came out publicly against the RPS bill to avoid a conflict, a spokeswoman for the firm said.

Between contract lobbyists and full-time employees, Nevada’s largest electric utility has 12 people registered to lobby on its behalf, which was purchased by Warren Buffet’s Berkshire Hathaway in 2013.

In addition to three company executives registered to lobby, the utility also contracts with the powerful firms of:

The utility has stayed officially neutral on the bill since it was introduced, but on Wednesday submitted a letter to legislators outlining a number of concerns with the amended bill and suggesting several tweaks and changes.

“In order to comply with the ramp up of renewable energy procurement, the bill should be revised,” the document states. “Without these revisions, compliance with the renewable portfolio standard is unlikely.”

It also warns that the bill doesn’t “establish a procedure for transferring the assets” owned by the utility, and warns that legislators should assess whether the bill would “increase the stranded asset costs for which consumers will be responsible if Question 3 passes.”

Nevada’s lieutenant governor traditionally isn’t heavily involved in state energy policy, but Mark Hutchison was appointed by the governor to head an important committee tasked with recommending how the state should transition to an open retail energy market if Question 3 passes again in 2018.

Prior to elected office, Hutchison helped co-found the law firm of Hutchison & Steffen, where the longtime trial attorney said he represented clients “all over the place” on Question 3, including  NV Energy and MGM. He said that his primary focus was addressing the questions facing the commission, and didn’t have a dog in the fight.

“I view myself as Switzerland,” he said. “I am neutral and I am somebody who wants to ensure that I simply implement and deliver to the governor what he’s asked us to do under the executive order.”

In an interview last week, Hutchison said he didn’t remember how he voted on Question 3. His office later clarified that the lieutenant governor didn’t want to disclose how he voted on the ballot question because it could interfere with his ability to be a fair broker in managing the 25-member committee.

The freshman Democrat behind many of the ambitious energy proposals this session is also veteran of the renewable energy sector.

Brooks, a former rooftop solar installer and member of the International Brotherhood of Electrical Workers, founded Las Vegas Solar Electric where he worked between 2001 and 2004, and spent a decade as director of Bombard Energy, a solar panel installer in Las Vegas. During the 2015 session, he worked as a lobbyist for Valley Electric Association, a rural electric cooperative covering parts of Southern Nevada outside of Las Vegas. He started his own consulting firm, Brooks Consulting, in January 2016.

Brooks said in an interview that he had dropped all of his clients ahead of the legislative session to avoid even suggestions of conflicts of interest.

Updated at 10:35 a.m. to reflect the fact that Brownstein Hyatt Farber Schreck no longer represents Green Tech Action Fund, and dropped them as a client after Wynn Resorts came out against the bill.

Updated at 2:37 a.m. on May 22 to tweak wording describing several of the lobbying firms that suggested all of them represented casinos opposing the bill.