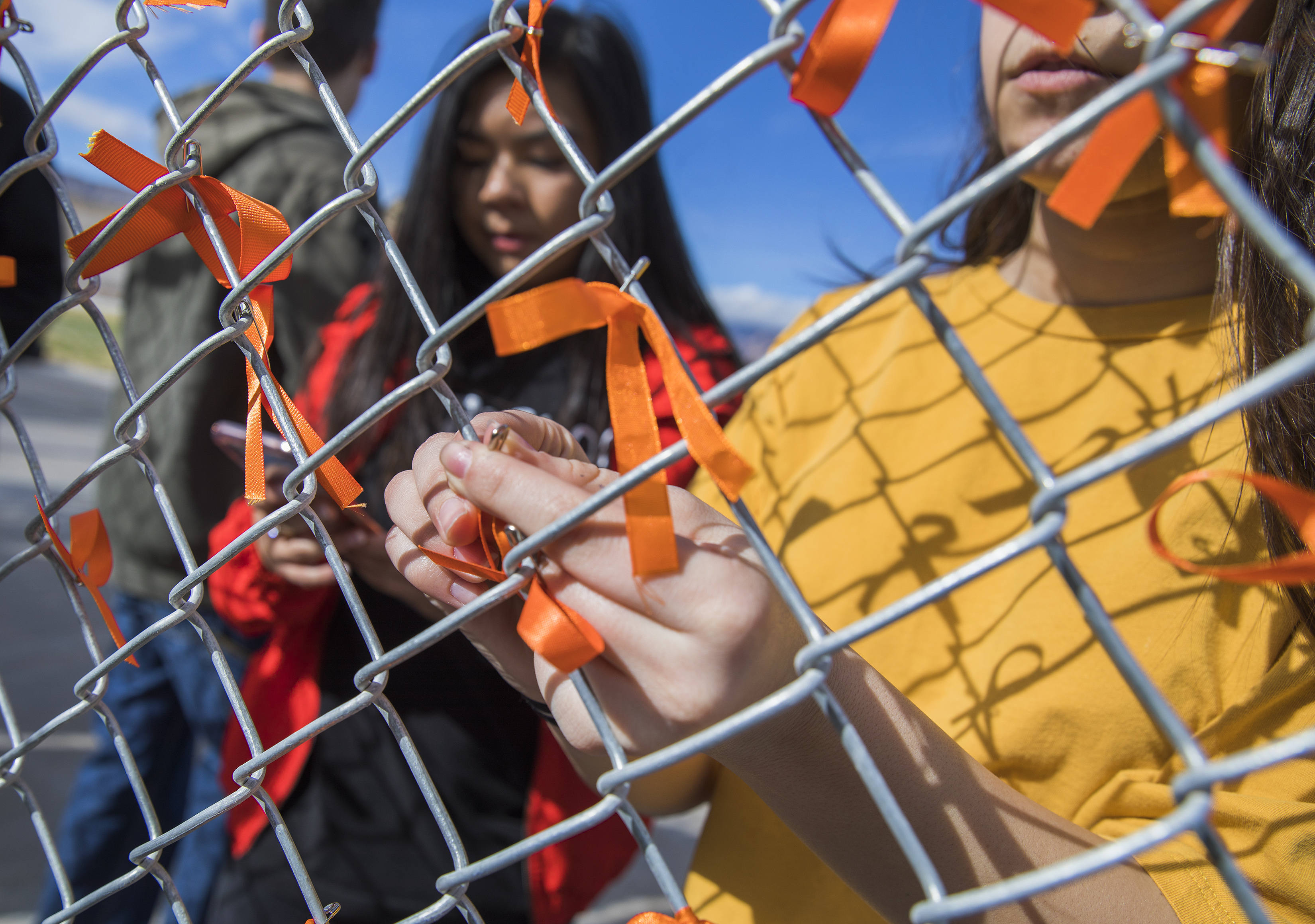 The creation of the School Safety Task Force came after the Parkland, Florida, school shooting rattled the nation — another tragedy in a seemingly unending stream of them — and ignited new conversations about how to protect students and staff. And so the school superintendents, principals, charter school representatives, teachers, parents, law enforcers and lawmakers who made up this group got to work, analyzing physical infrastructure and student well-being.

After four public meetings and other workgroup get-togethers, the task force delivered a final report to Sandoval with six multi-pronged recommendations. The former governor took those suggestions into consideration as he crafted a budget to hand off to his successor, Gov. Steve Sisolak. Sisolak included $76 million — about $54 million of that being new funds — over the upcoming biennium for school safety needs.

But lawmakers chopped that dollar amount by roughly $30 million last week, noting that schools sometimes have a difficult time onboarding a large number of new social workers and that larger school districts could make many of the infrastructure improvements in the budget using their own capital funds. That frustrated some members of the task force.

“Overall, I think it’s very sad we’ve come to the point where legislators are having to choose between programs to bolster student mental health and well-deserved teacher raises,” said Caryn Swobe, a parent member of the task force. “I just think legislators in the past have done a huge disservice to our students by so severely restricting our ability to raise revenue. They are just so short-sighted. There’s just not enough money.”

The reduction stemmed from an ongoing conundrum facing the governor and state lawmakers — how to free up money for teacher raises promised by Sisolak. The Clark County School District says it can’t afford to award raises and, therefore, didn’t include money for that purpose in a final budget adopted earlier this week. The situation has led to public haggling between district officials and the governor’s office.

Although Republicans have seized on the rollback of the school safety budget and argued that it will endanger children, Democrats have tried to frame the situation as a glass half full. Assembly Democrats issued a press release on Monday emphasizing that they have allocated $23 million in new school safety funding above levels in the current biennium and blamed Republicans for blocking school safety legislation in prior sessions.

“What’s being proposed now, while less than what was recommended by the commission, is still a substantial increase in school safety funding,” said Democratic Sen. Yvanna Cancela, who sat on the task force. “I’m grateful the governor took into full consideration the commission’s recommendations, and I’m proud of the work the Legislature has done to be both fiscally responsible and also increase school safety more than we’ve done in a very long time.”

The task force didn’t request a specific dollar amount for school safety needs, but their recommendations carried an obvious price tag. For instance, the group suggested the state make a “significant investment” in school-based mental health professionals and expand the number of school police officers.

“I would say more a disappointment because there is a clear need to address the school safety issues across the state,” he said.

Task force members especially expressed concern about how the funding cut would hamper efforts to increase the number of school social workers, nurses, psychologists, counselors and safety personnel — in other words, staff members who are often the first line of defense in recognizing students struggling with mental health issues.

The vice chairwoman of the task force, Republican Assemblywoman Jill Tolles, said the piece she was fighting hardest for was getting social workers in schools.

“I would like ... to see us fill [social work positions] as soon as possible because not only does it have implications on student well-being and school safety, it also relieves a lot of burden from teachers’ workload,” Tolles said. “I hear from teachers all the time that they are frustrated with having to play so many different roles and not being able to dedicate their time into what is their profession: teaching and successful student academic outcomes.”

Pilar Biller, a task force member and teacher at Damonte Ranch High School, said she envisioned the group’s recommendations as a “starting point” that would be expanded over time. She said the recommendations should have been fully funded.

“The more support our students and families have, the more likely it is that we can identify students who are experiencing mental illness, suffering with high levels of anxiety, or feeling marginalized,” she said in a statement. “Everyone should feel safe at school and reaching that goal is a complex journey. Our schools are understaffed, failing to come close [to] the expert recommendations.”

With 12 days left in the legislative session, it’s possible more money shifting could occur, leading to a restoration of school safety funds. Pat Hickey, a task force member and executive director of the Charter School Association of Nevada, said he is “sympathetic” to Sisolak, who must balance budget requests with the reality of available funds.

“I’m sure they will look for money and they’ve retained some of that in there,” said Hickey, who previously served in the Legislature. “But, again, there is only so much money to go around, and I guess that’s why any governor sits in the chair that he or she does and has to make those difficult decisions.”

A large part of the rollback was to funds initially destined to go to infrastructure improvements — gates and other reinforcements that could prevent a school shooting. While the budget committees set aside some money to help rural districts with those improvements, they’re excluding Clark and Washoe Counties from the funds, saying the bigger districts have other ways to pay for capital projects, including local bonds and a tax hike.

That decision drew differing reactions from the two large districts.

“What I’m really concerned about is some of the infrastructure,” Clark County Superintendent Jesus Jara said in an interview. “My conversation with the governor today and his staff — they’re concerned as well. We’re trying to find ways ... that I can try to plug up some of the holes around some of these issues to make sure that we can continue to show that our children are safe in school.”

The Washoe County School District, on the other hand, said the reduction won’t affect them in the short term because voters approved a sales tax hike in 2016 to support capital improvements. They expect to still be able to install security perimeters and single points of entry in their elementary and middle school campuses by the fall, with improvements to high schools happening later.

“From WC-1 passing in 2016 we have what we need for capital projects for the moment, which includes safety and security upgrades,” said Riley Sutton, a spokesman for the district. “We honestly probably couldn’t spend any more money on capital projects even if it was available – we are competing against ourselves for contractors and labor. Medium and long range, that’s harder to say.”

John Anzalone, principal of Sierra Vista High School in Las Vegas, wasn’t on the task force, but he has been vocal about safety needs. The funding cut last week disappointed him. He had planned to put extra money toward new cameras.

“It's just coming from our pocket, when the extra funds could've helped,” Anzalone said. “Any additional funding would have come a long way. Now we have to be more strategic about what we do."

For Anthony Petrosino, the director of the Justice and Prevention Research Center at the think tank WestEd and a non-voting member of Nevada’s School Safety Task Force, the quality of the safety investments and the strategy behind them are more important than sheer volume. After all, he said, the most common problems students face in school relate to bullying and mental health issues; a school shooting is actually a statistically rare event.

“If we have these resources, how can we be smart about them? Where can we devote those resources? Where would it make a bigger difference?” he asked. “You could invest $500 million in school safety, and you still might not be able to prevent a school shooting. Even if you turn every school into a fortress, I don’t think you are going to be able to prevent an issue that’s actually plaguing all of society.”