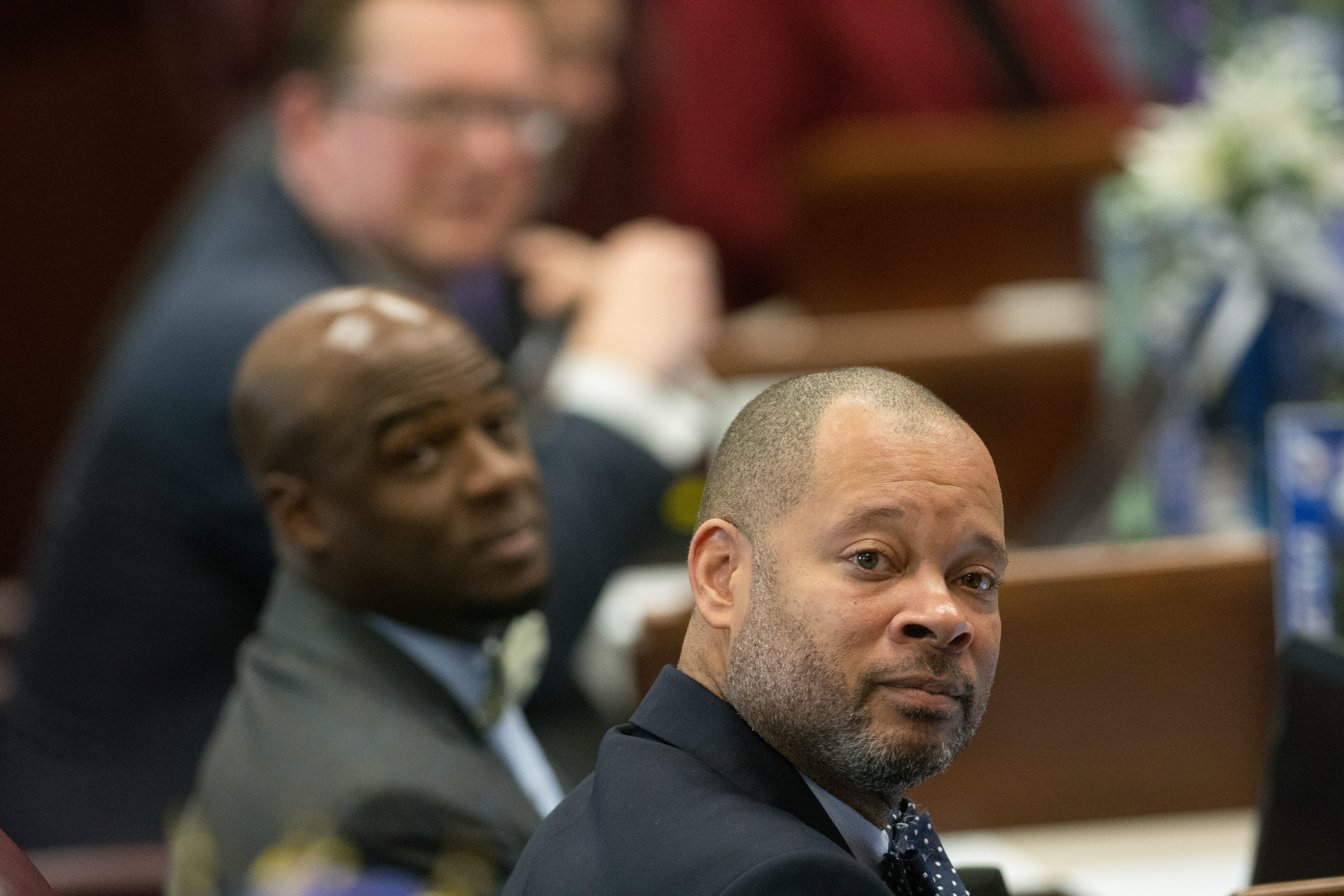 It was just a year ago that Cassandra Little was Inmate 47078-048 serving out a 23-month sentence for Medicaid fraud in a federal prison camp in California.

When she was released, she found herself incarcerated in a different way, barred from a right most Americans take for granted.

“Nothing was more disheartening than this period this past year than not being able to actively participate in the Democratic process. I wasn’t able to vote in the presidential election,” Little told a Senate committee Tuesday afternoon. “I felt like half a citizen, invisibile, unwanted, disconnected.”

It’s ex-felons such as Little who Democratic lawmakers hope to help through legislation they’ve put forward to restore civil rights to ex-felons, expanding their ability to register to vote and serve on a jury. Assembly Speaker Jason Frierson and Senate Majority Leader Aaron Ford presented two bills to the Assembly Corrections, Parole and Probation and Senate Judiciary committees on Tuesday that would make it much easier for ex-felons to restore their civil rights upon serving out their sentence.

The two African-American legislative leaders took very different approaches in their testimony, though, with Frierson de-emphasizing the focus on race in the legislation and Ford leading with it.

Under current law, ex-felons who have been convicted of lower-level crimes, like forgery or possession of certain drugs, can have their voting rights immediately restored upon release from prison or after receiving a so-called “honorable discharge” from probation or parole, meaning they passed any drug tests, made curfew, paid any necessary restitution and met all other conditions of their parole or probation.

Advocates for criminal justice reform argue that someone can be dishonorably discharged for technical violations, such as not having enough money to pay restitution or missing curfew once, even though they’re trying to get their life back on track. Frierson said during the hearing that restoring rights to the formerly incarcerated will allow them to better transition back into society, leading to a decrease in repeat offending.

“I believe that this will result in folks really embracing and appreciating the freedoms that they lost and gained back,” Frierson said.

The bill also allows anyone who has been convicted of a felony two or more times to have their voting rights restored immediately after being discharged from parole or probation or released from prison and anyone convicted of the highest-level felonies, including rape and murder, to have their voting rights restored after two years. Under existing law, all of those individuals would have had to petition a court for the restoration of their civil rights, a process that one attorney called “Kafkaesque.”

“It is a daunting task,” said criminal attorney Robert Langford. “It is next to impossible for a person without a law degree to understand what needs to happen.”

A companion bill, SB125, would allow lower-level felons on probation or parole to have their civil rights — including voting and serving as a juror in civil or criminal actions — restored after one year of their term of probation or parole or upon completion of his or her term of parole, whichever is sooner. It also shortens the waiting period for people convicted of certain crimes to petition the court to seal their records relating to the crime.

People of color are traditionally overrepresented in the criminal justice system, which means the issue of criminal justice reform is often framed as an issue of racial justice. But Ford and Frierson tackled the topic in very different ways during the hearings.

Frierson didn’t mention race until his closing remarks — and even then, it was only to note that he believes the conversation shouldn’t be focused on race.

“You may notice I didn’t bring up race because this isn’t about race,” Frierson said. “The 90,000 impacted individuals who are believed to be disenfranchised, less than a third of those are African American. This isn’t an African-American bill.”

Ford, on the other hand, said he felt an obligation to bring up race, what he “considered to be an elephant in the room.”

“I do believe I have an obligation, frankly, as an African-American male to speak truth to power about the issues that affect my community,” Ford said.

Republican Sen. Don Gustavson bristled at the mention of race.

“Race never entered my mind when reading this bill. It was read as it should’ve been read — with an open mind,” Gustavson said. “Unfortunately Senator Ford in your opening statement you made it a racial issue.”

Lawmakers skeptical of the legislation fell across a broad spectrum, from those who wholeheartedly supported the restoration of rights low-level offenders but worried about doing so for the state’s most hardened criminals to those who believe that no felons should have their rights restored.

“They are rapists, murderers, serious violent offenders,” said Republican Assemblyman Ira Hansen, about the state’s high-level offenders. “I have a really hard time believing the citizens of Nevada are saying, ‘Boy I hope those people get their right to vote.’”

Instead of allowing everyone dishonorably discharged to vote in “such a blanket way,” Republican Assemblyman Jim Wheeler suggested lawmakers could set up a panel to evaluate each case on a case by case basis. To that, Frierson countered that he was “proposing to do it in such a blanket way because it impacts 90,000 Nevadans.”

Republican Minority Leader Michael Roberson, meanwhile, took to Twitter before and after the hearing to not only argue against the proposed legislation but question whether felons should be able to vote at all, as allowed under state law.

“Felons should not be able to vote. Not a close call,” Roberson tweeted before the hearing.

“This has become the session for felons. Everything to help the criminal. Who will look out for victims and law-abiding Nevadans?” he tweeted shortly after the hearing ended.

But not all Republicans were willing to draw such a hard line in the sand. Republican Sen. Becky Harris said she is “very supportive of the restoration of rights” and noted she has helped people get their rights restored. Republican Assembly leader Paul Anderson said in an interview that he’s in favor or “at least looking at that policy and making it a little bit easier to regain your voting rights.”

The question remains whether Gov. Brian Sandoval would sign the proposed bills into law. He vetoed similar legislation, AB301, in 2011, which would’ve automatically restored voting rights upon completion of any felony sentence of imprisonment, probation or parole. In his veto message, the governor noted that the bill did not alter the restoration of the rights to serve as a juror or hold office, which only happen after a certain period of time.

“Like these rights, the right to vote is a privilege that should not lightly be restored to those few individuals who commit the most egregious crimes in our society,” Sandoval wrote.

He was vague on Tuesday when asked what he thought about the proposed legislation.

“Justice, the justice system, those are things that I’ve told the Speaker that I look forward to working with him on,” Sandoval said.

But Frierson said during the hearing that he believes that the bill addresses the concerns raised by the governor in his veto message by extending the period of time that the most serious offenders must wait before their voting rights are restored.