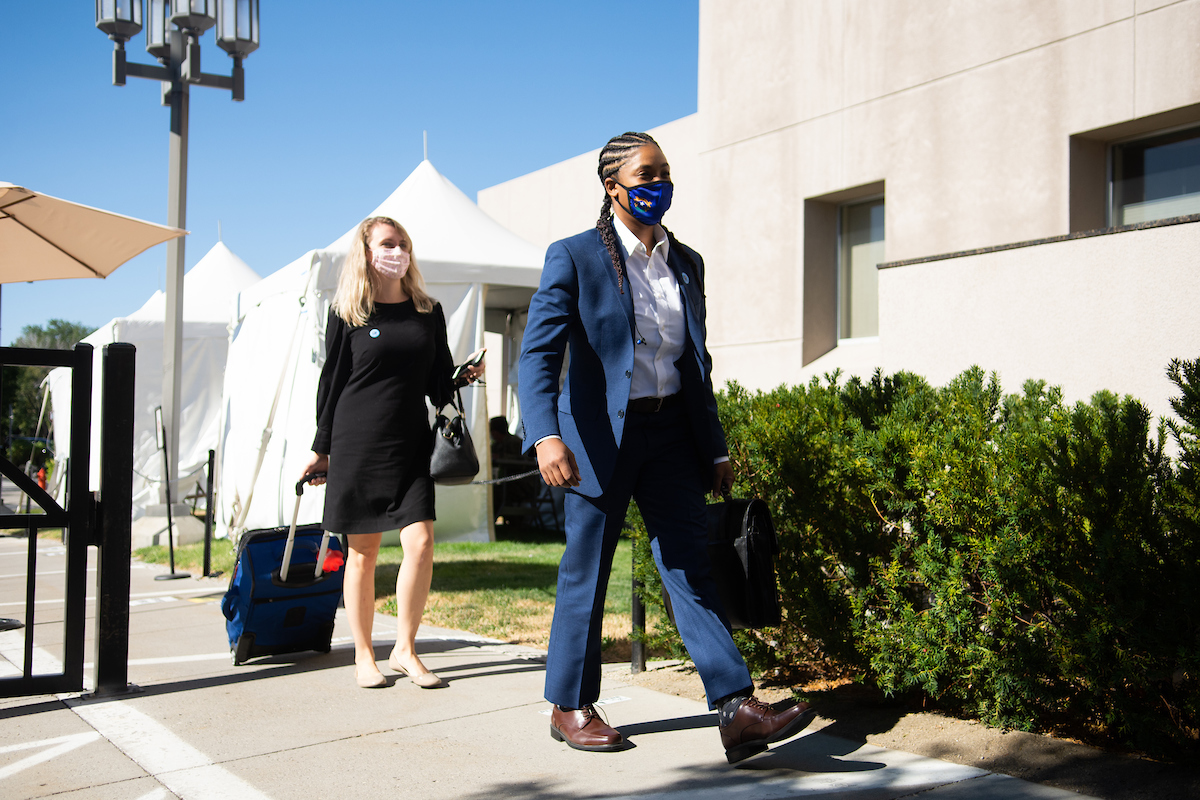 Members of the state Senate voted Wednesday to advance a trio of criminal justice reform bills sponsored by Sen. Dallas Harris (D-Las Vegas) that would add more limits on police use of deadly force, require additional recordkeeping on hate crimes and place rate caps on calls made to and from inmates.

The bills passed just as former police officer Derek Chauvin is on trial for the killing of George Floyd in Minneapolis — an incident that touched off a wave of protests last summer — and as protests continue over the death of Daunte Wright in Minnesota at the hands of police. But Harris said the national attention on police killings isn’t what is motivating her.

She remembers the 1992 Rodney King riots growing up. And as a Black woman, she says she’s conscious that she must be especially careful to keep her hands on the wheel and not make sudden movements when interacting with police.

“These are things that are ingrained in us growing up,” she said. “And so the imperative has always been there. I think other people are just kind of coming around to it, which is great.”

The three measures are among the 22 bills and resolutions passed out of both the Assembly and Senate on Wednesday, and part of the legislative rush ahead of the first house passage deadline next Tuesday.

Here’s a look at all three proposals, which now head to the Assembly.

Limits on police use of force

Members of the Senate voted along party lines to approve SB212, a bill that would put additional limits on police use of force, use of restraint chairs for people in police custody and police dispersal techniques during protests or demonstrations.

The bill requires police officers to use de-escalation techniques and other alternatives before resorting to higher levels of force to arrest an individual. It would also require police agencies to adopt use of force policies and training that take into account (before using deadly force) the potential threat posed by individuals not armed with a weapon, who are under 13 or over 70 years old, or are physically frail, mentally or physically disabled, pregnant, suffering from a mental health or behavioral health issue or experiencing a medical emergency.

The bill initially would have banned use of restraint chairs, but was amended to put limits on the practice including only using a restraint chair for persons who are physically violent, and if police get authorization from a higher-level officer to use the chair. The bill also limits use of the chair to no more than two hours unless authorized by a supervising officer. It would also ban use of a restraint chair for a person who is pregnant.

The measure also aims to put limits on police activities during protests or demonstrations, prohibiting officers from firing nonlethal rounds “indiscriminately” into a crowd or targeting a person’s head, pelvis or other vital areas. It also would require that police issue at least three orders to disperse and offer an egress route before firing chemical agents into a crowd (with some leeway in dangerous situations).

Some Republican lawmakers pushed back on the bill during a hearing and during the floor session Wednesday, saying statistics provided by bill advocates that showed Reno as having one of the highest rates of police killings of Black men were flawed and painted police in an unfairly negative light.

“This really boiled down to an attack,” Ira Hansen (R-Sparks) said about the bill in a floor speech.

Sen. Melanie Scheible (D-Las Vegas) said she works with police who are trying to serve honorably every day in her day job at the Clark County district attorney’s office.

“This bill perfectly hits on the places that it's necessary to have reform without imposing on the ability of an officer to utilize their good judgment and their training to effectuate their jobs adequately,” she said. “But it allows for better community trust, better community relationships, and for the progress and improvement of our law enforcement agencies moving forward.”

As written, SB148 would require that all state and local law enforcement agencies submit monthly records of all hate crimes to the state’s Central Repository for criminal history records. The bill would require hate crime statistics, including data on prosecution and sentencing, to be made available to the public.

The bill was approved on an 18-3 vote, with Republicans Scott Hammond, Ira Hansen and Joe Hardy all opposed. Hansen spoke against the principle of enhanced penalties for crimes committed based on a victim’s personal characteristics.

“The whole concept is flawed,” Hansen said. “I think we need to get back to the idea that all are equal in the eyes of the law, including all people that are victims of crime.”

Democrats, however, said the law is full of enhanced penalties, including for crimes against the elderly and against law enforcement.

“We are not yet perfect, but we are on our way to perfection,” said Sen. Pat Spearman (D-North Las Vegas). “And until we get there, then we will need these types of enhancements to make sure that those who break the law, pay.”

The state Public Utilities Commission (PUC) would be required to regulate and set rate caps on businesses that provide calling services for inmates under SB387.

“It’s not 1989 anymore, and the rates should be coming down,” Sen. Scott Hammond (R-Las Vegas) said ahead of the vote.

Harris said high calling costs prevent inmates from maintaining relationships with family, and that in turn could increase their chances of committing crime again when they leave prison. She also nodded to the multimillion dollar commissions that state prisons get from phone service companies — last session, the prison system estimated it would earn $10 million a biennium in commission from the phone service vendor.

“Can I necessarily be upset at agencies for wanting to get a little bit of additional funding where they can? No, not necessarily,” she said. “I just wish it didn't come on the backs of the folks who have the least.”