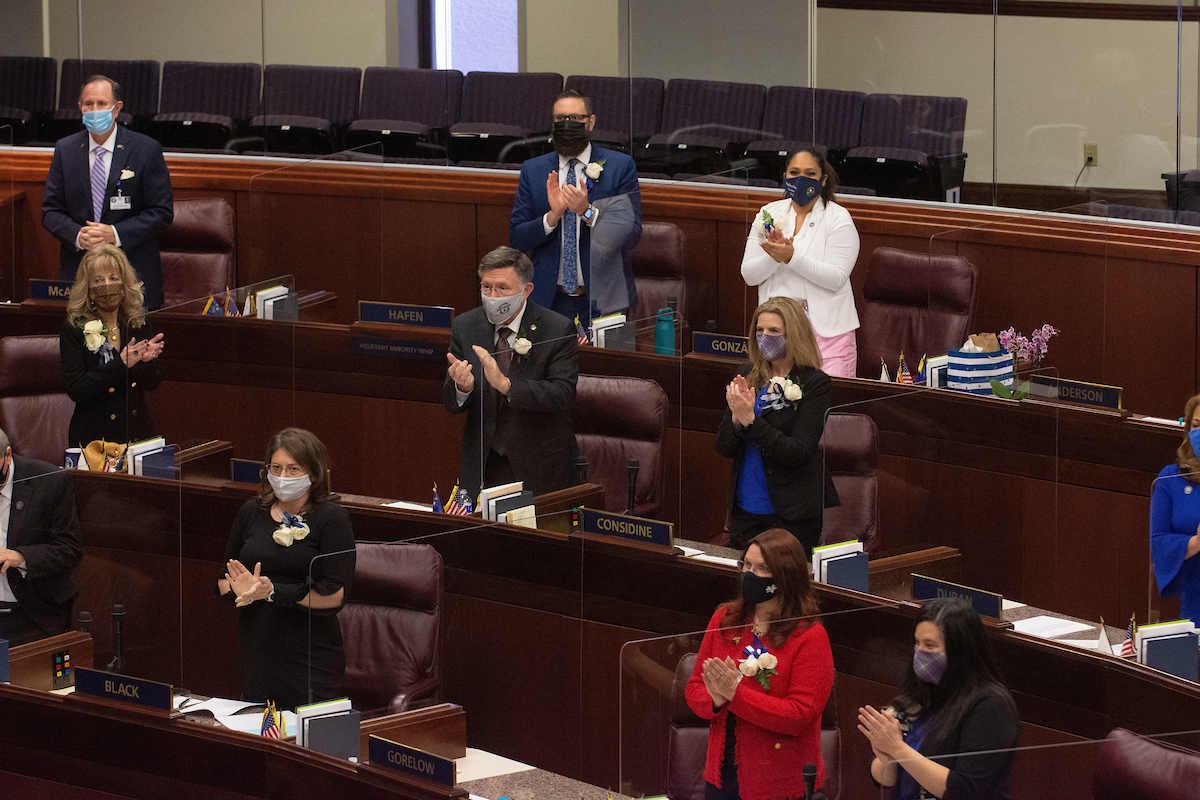 State lawmakers are moving quickly to process a bill that would provide an additional $50 million for a pandemic-related grant program aimed at small businesses and nonprofits, holding a hearing and unanimously voting the measure out of the Assembly on Wednesday.

During the hearing on the bill, AB106, Treasurer Zach Conine said that more than 4,500 small businesses and nonprofits have received funding through the Pandemic Emergency Technical Support Program (PETS), which provides awards of up to $10,000, but the overwhelming response to the program has left some applicants waiting. Gov. Steve Sisolak also spoke during the virtual meeting to advocate for the bill — a proposal he called for during his January State of the State address.

“Response to this program has been incredible, but also clearly demonstrated the need for assistance that exists throughout the state,” Sisolak said at a joint meeting of the Assembly Ways and Means and Senate Finance committees. “We know the need continues. That's why I announced my recommendation to add another $50 million in funds.”

After the hearing, Assembly members suspended normal rules to process the bill faster, approving it on a unanimous vote. It next heads to the state Senate, where it’s also expected to move quickly through the legislative process.

Assemblywoman Robin Titus (R-Wellington) also asked the governor to loosen restrictions on businesses, while emphasizing that there is urgency to pass the bill soon, as it requires all funding to be committed by the end of June. That’s when the state’s fiscal year ends, and any spending after that date is limited because of constitutional requirements that the state fund K-12 education before any other program.

“I am supportive of the $50 million in funding to help our small businesses that have been impacted by our blanket restrictions since last spring. I encourage the governor to loosen restrictions upon them and allow people to make a living,” Titus said.

Small business owners, including Las Vegas-based Empowered Cafe co-owner Cassandra Barslow, said their businesses had been able to stay open through the pandemic because of financial support received from the PETS program.

“The PETS grant just infused this capital for us to be able to keep those doors open and to keep our employees,” Barslow said. “We were about to make tough decisions where we were gonna have to let our employees go and just my husband and I run it, and we didn't want to do that.”

PETS launched on Oct. 19 with $20 million in funding, after an earlier state effort to administer commercial rent assistance awarded less than half of its approved funds. After the approval of more federal funding shortly after the program’s launch, the number of dollars available for small businesses and nonprofits through PETS swelled to $51 million.

In the four days the program was open for applications, the state received more than 13,500 submissions — about 10 times the amount the rent program received.

“If we get that additional [$50 million], we'll be able to really chip away at that, and the majority of people who applied in October will get funding,” Conine said in an interview in January.

The bill also requires that all funds be committed by June 30 and requires the Governor’s Office of Economic Development (GOED) to send a report to the Interim Finance Committee by that date that details the expenditures made from the funds. GOED Director Michael Brown, said that report would likely include more detailed information about the geographical spread of program funding across the state, as well as more information about how awardees have spent the funds.

Still, small business owners said that grants through the program were a huge relief.

“I am grateful that I was the recipient of the PETS grant, which really helped us tremendously to keep our doors open and for me to make payroll,” said Trina Giles, owner of Gritz Cafe in Las Vegas. “Your approval of this, of this bill will help many other small businesses like myself.”