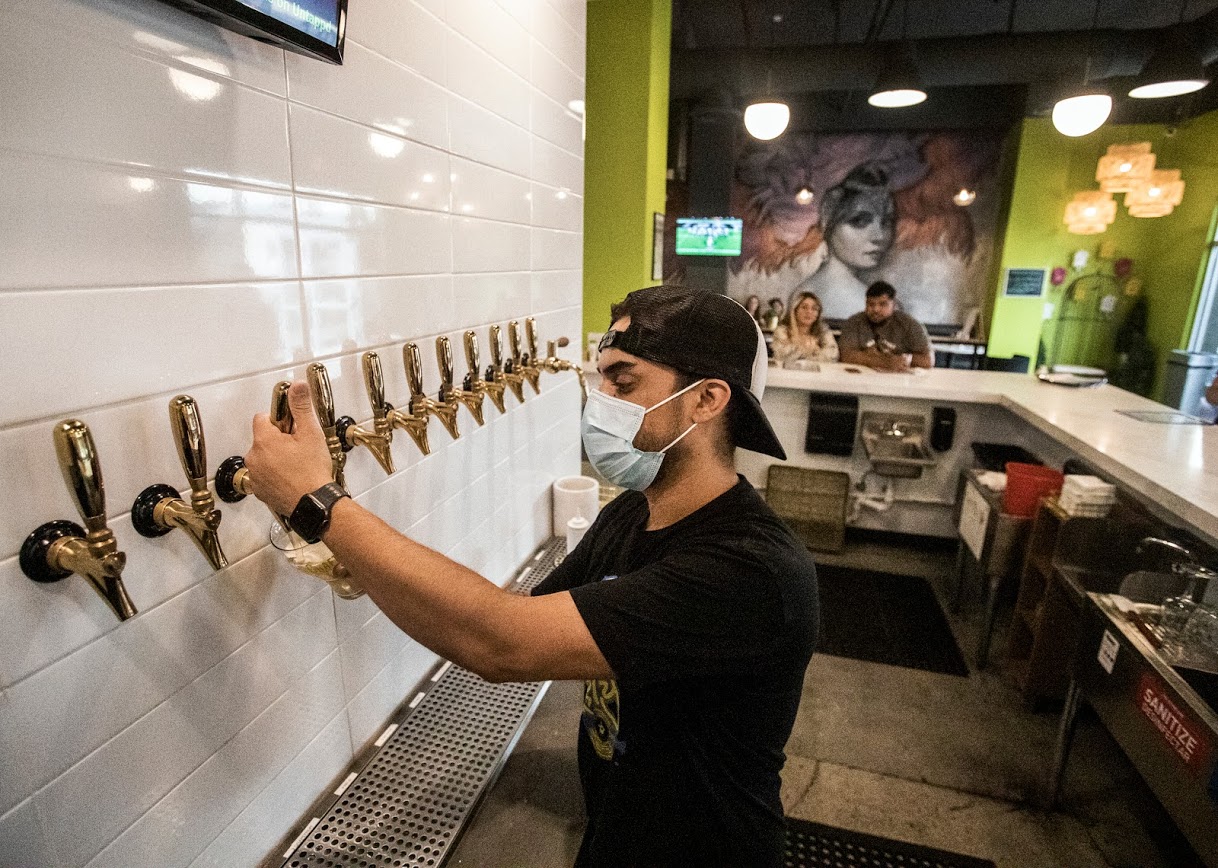 A pandemic-related grant program aimed at small businesses and nonprofits has already helped thousands of Nevadans, but an overwhelming response to the program’s launch in October has made assisting all of the applicants nearly impossible.

The Pandemic Emergency Technical Support Program (PETS) launched on Oct. 19 after an earlier state effort to administer commercial rent assistance awarded less than half of its approved funds. The PETS program offered broad eligibility, and in the four days the program was open for applications, the state received more than 13,500 submissions — about 10 times the amount the rent program received.

Treasurer Zach Conine said that the application period was one of the busiest in the history of ZoomGrants, an online application management system that Nevada and other jurisdictions have used to administer CARES Act funds.

“We've had so much volume through the PETS program that we were slowing down ZoomGrants in the whole country. So there were grant programs in other states and cities that didn't work because there were so many people trying to sign up for PETS,” said Conine.

Through the middle of January, the treasurer’s office and Governor’s Office of Economic Development had sent out more than $40 million through the program to approximately 4,100 small businesses and nonprofits in awards of up to $10,000.

But with so many applications to process, communication between the state and some small businesses has not always been clear.

Roy Brennan, the owner of a hamburger restaurant in Reno called Beefy’s, said he never received a confirmation email after applying for the PETS grant and received only one response from the state that he was in the queue.

Since the pandemic began, Brennan said he has lost one employee and had to reduce his business hours. And in order to expand his restaurant’s capacity, Brennan spends two hours each morning putting up a tent to allow for outdoor seating.

“You're just out there, just lost. It's very frustrating to be left in the dark,” said Brennan.

On Wednesday, the treasurer's office provided comment that Brennan's email was incorrectly listed on his original application, but multiple communications had been sent to him over the last several weeks. And after publication of the story, Brennan said he was in communication with the treasurer's office and that his grant application was approved.

The state has already allocated nearly all of the $51 million that was previously available through the program. But with more PETS funding potentially on the way, applicants, who have not yet received funds through the program, may still be awarded the grant.

In his State of the State address Monday, Gov. Steve Sisolak proposed an additional $50 million in the state budget for the program. That money could be available as early as the first few weeks of February because the Legislature can approve that allocation by designating federal funds from the CARES Act before needing to approve the full budget.

“I’m asking the Legislature, as one of their first items of business, to get this done,” Sisolak said about approving the additional funding for the PETS program.

Conine said that the PETS program is the largest small business assistance grant program in state history. And because the treasurer’s office does not normally manage grants, Conine and his team have had to adjust to new processes that come with administering the program.

“This is something that was generated over the span of a couple of weeks, with a team of less than 10. We've been pretty flexible, looking for ways to speed up the process,” said Conine.

After the application period in October, the first step of the process was to put businesses in a ranked order based on a prioritization list set up by Conine’s office and approved by the Legislature. The list was aimed at those most affected by the pandemic and included disadvantaged businesses, nonprofits, bars, pubs, taverns, breweries, distilleries and vineyards.

After applicants were prioritized, the state began to process requests for funding using a variety of checks. Applicants must have an active business license with the state and have no more than 50 employees, and they must demonstrate that they have faced pandemic-related hardship. Businesses also are reviewed to see whether they are still active and have a physical location in Nevada.

If an application is approved, the recipient must submit paperwork, including a signed grant agreement and banking information, and then the state reviews that information and administers the funds.

But some of those steps can slow the process down. Conine said that he and Michael Brown, the executive director of the Governor’s Office of Economic Development, have had to repeatedly call some businesses to try to verify that the business is real. Conine estimates that of the more than 4,000 approved applicants, he and Brown have talked to 700 or 800 directly.

As Conine and his team handle a massive volume of applications with limited resources, they aren’t always able to provide responses to every applicant.

“I think that our goal here is to communicate with businesses that they are in line, that we're going to fund as many businesses as we can. You know, given the volume of emails and the fact that there's only, including myself, three people answering them, we don't look up everybody's status, when they reach out. And that's just to be fair,” said Conine.

Even as some applicants experience struggles in communicating with the state, others have said that applying for the PETS program was easy, including Kelli Kelly, executive director of the Fallon Food Hub.

“I write a lot of grant applications, usually like to the Department of Agriculture or to the USDA. And this was totally unlike anything I've ever written before,” said Kelly. “It was very straightforward. It was, you know, tell us who you are, provide us with your bona fides, you know, validate the fact that you're a Nevada-based business.”

Kelly said the only problem she faced while applying was the grant website crashing, and technical issues were among the most common problems people experienced during the application process.

“With the exception of ZoomGrants and some technology issues, which are more of a function of volume than anything, we think the process has been relatively smooth ... for a thing that's never been done before in the history of the state,” said Conine.

Jonathan Bradley, who operates a frozen yogurt food truck in Southern Nevada called Spoon-a-Bowl with his wife Ashley, also said the application process was “super easy.” But with limited channels of communication between the treasurer’s office and PETS program applicants, Bradley had to get creative in order to hear back about his grant request.

Bradley said he finally received a response to his application after tweeting at Erik Jimenez, senior policy director for the treasurer’s office.

“I just, kind of tongue in cheek, sent him a message or sent him a tweet saying ‘us next please,’ you know, we desperately needed it at that point,” said Bradley. “And he got right back to me and told me that he was going to look into our profile, and literally within the next 30 minutes, I got a phone call from him — and you know there's few things in life that have given my wife and I more joy than that phone call.”

For Bradley, receiving the grant was a lifeline. As food truck operators, Bradley and his wife had to completely shift their business model when the pandemic hit. Instead of selling their frozen yogurt at events, they had to start delivering their product — and after being denied a grant from the city of Henderson, they were in need of help.

“Looking back on it, had we not gotten that grant, I'm fairly certain that our business would have gone out of business,” said Bradley.

With the grant money, Bradley said he was able to catch up on bills and that he’ll have enough money to survive until his selling season starts up again.

Across the state, other small businesses have experienced flashes of relief because of the money they were awarded through the PETS program.

Cassandra Barslow, co-owner of Empowered Cafe in Las Vegas, said the $10,000 her business received allowed her to hold on a little bit longer.

Barslow trains and employs blind workers, and when the pandemic shut her business down for a few months, she had to let her workers go. Barslow said she was able to reopen in June with the help of a loan from the Paycheck Protection Program, but the PETS grant was another huge boost in allowing her to pay her employees.

“We literally cried cause we just got the PETS grant and we—I honestly thought I was going to have to let my employees go again,” said Barslow.

Wyndee Forrest, who owns CraftHaus Brewery in Las Vegas, also was awarded money from the PETS program. Forrest said she had to change her business model four different times to pivot with all of the challenges posed by the pandemic. She applied to the program hoping for a little help with providing for her team.

“It's not going to save us from going bankrupt. It will help us inch by to maybe cover, you know, a two week payroll timeframe, but any grant is always welcome,” said Forrest.

The treasurer’s office is still administering the last of the $51 million that was previously allocated to the PETS program, and Conine said money continues to go out every day. But if the Legislature approves the governor’s request to allocate another $50 million to the program, Conine’s office can begin to approve funds for many more of the nearly 14,000 original applications as early as the first few weeks of February.

That extra funding would come from money left over from the CARES Act, according to Conine. He also added that he wants to get as much money out to small businesses as possible using the PETS program.

A release from the treasurer’s office on Wednesday stated that all applicants who were waiting to hear if they had been awarded a PETS grant, along with those previously denied because of lack of available funding, would be emailed on January 20 with information on the most recent updates to the program, including the possible addition of more funding.

Conine said that there are no plans to reopen applications for the program because he wants to get the grant money out to those that have been waiting.

“If we get that additional 50, we'll be able to really chip away at that, and the majority of people who applied in October will get funding,” said Conine.

Conine also placed a strong emphasis on getting small businesses, in particular, the support and resources they need, and hopes they will help serve as the backbone of the state’s economic recovery.

“Talking to these small businesses, I think it's still very clear how important it is to support their efforts, and try and make sure that they've got the resources they need,” said Conine.

During his State of the State address, Sisolak also announced that Lt. Gov. Kate Marshall will be working to create a Small Business Advocacy Center that the treasurer’s office is also helping with.

As small businesses in Nevada continue to deal with pandemic-related hardships and other problems past the pandemic, the advocacy center is intended to help centralize state resources that exist to help small businesses.

“The goal of that Small Business Advocacy Center, eventually, is to serve as a Nevada 211 for small businesses,” Conine said, “so that they can reach out and say, ‘hey, I'm having trouble doing this,’ and then they can get the help they need to get going.”

This story was updated at 4:00 p.m. on January 27 to include an update about Brennan's grant application.