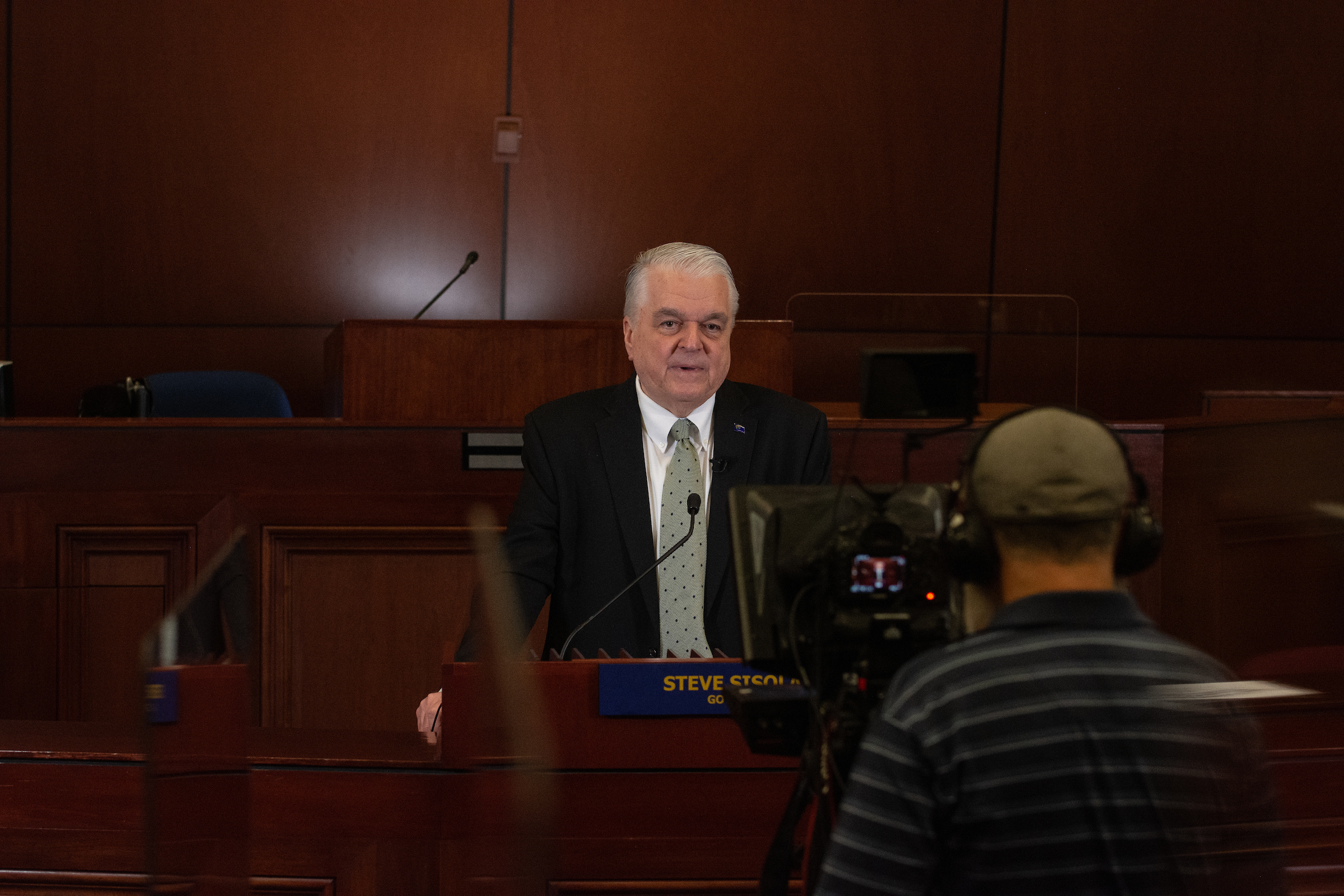 Gov. Steve Sisolak told Nevadans experiencing some of their darkest hours of economic and public health devastation that he has a plan to create more than 165,000 jobs over the next decade, launch new initiatives to retrain displaced workers and build out an economy based on clean energy, blockchain and other futuristic technologies.

The biennial State of the State speech, which was recorded over the weekend in the Assembly chambers in Carson City, comes a day after the governor’s office released initial details of Sisolak’s proposed $8.68 billion two-year budget. State of the State speeches typically accompany the release of the budget, which under state law must be transmitted no later than 14 calendar days before the start of the 120-day legislative session, which will begin on Feb. 1.

In the speech, Sisolak unveiled his forthcoming legislative agenda which focuses largely on job growth, clean energy investments and general economic diversification amid the state’s sluggish recovery from the COVID-19 pandemic.

“As I said before, it’s not enough to just aim for a full reopening of our current economy,” he said during the speech. “We must look forward to the kind of economy that will let our state prosper in the future and create opportunity for all Nevadans.”

The speech attempted notes of bipartisanship, attracting video appearances from Republicans including former Gov. Brian Sandoval, Secretary of State Barbara Cegavske and state Sen. Ben Kieckhefer. Sisolak, a Democrat, has already announced his intention to run for re-election in 2022, with many Republicans considering him to be a vulnerable target given historical poor performance by the president’s party in midterm elections.

Days after calling for the National Guard to be on standby should feared chaos break out in the state capital, and after protracted legal challenges that sought to nullify the results of the presidential election in Nevada, Sisolak denounced “the division and polarization that is gripping our country.”

“It has to end. It’s breaking down trust in our institutions and threatening our ability to solve problems we face,” he said. “This is America. This is Nevada. And we need to pull together.”

Sisolak also nodded to the massive volume of unemployment claims that flooded the Nevada Department of Employment, Training and Rehabilitation as shutdowns began. He’s called for unspecified improvements in computer infrastructure that supports the system and tapping into private sector expertise.

“While public employees at every level of government worked around the clock to deal with the impact of the pandemic, we found that many of our government systems were out-of-date and overwhelmed,” he said. “We need to fix them.”

During his address, Sisolak mapped out five primary initiatives for the near future — including passing new energy legislation and establishing a private-sector job training program — along with other, smaller goals. They include:

Sisolak, as he has in many public addresses over the last 10 months, again urged Nevadans to put up a united front against COVID-19 by wearing masks, avoiding gatherings and taking steps to protect each other. He also emphasized the massive challenge ahead of the state as it continues the slow rollout of the COVID-19 vaccine to the state’s more than 3 million residents.

To date, Nevada has administered more than 100,000 initial and secondary doses of the vaccine — though that number is still only a sliver of the amount needed to significantly slow viral spread in the state.

He noted the efforts of state immunization officials, the Nevada National Guard and the Division of Emergency Management, who have stepped in to speed up the state’s vaccination efforts. The state recently helped stand up a mega-vaccination site at Cashman Center in Clark County, where the rollout of the vaccine has been the slowest, and the governor’s medical advisory team recently recommended that EMS providers, medical assistants, pharmacy techs, dentists and veterinarians be allowed to administer doses of the vaccine.

“Let me assure all of you — every part of government is focused on vaccinating Nevadans,” Sisolak said.

The governor noted the fact that the switch to remote learning has widened achievement gaps, and said he’s working to prioritize educators for vaccines and direct federal relief funds to the project of sending children back to class.

“I have not been quiet about my urgent desire to see children return to in-person learning, because we will not recover as a state if we leave our children behind,” he said. “I will do whatever it takes to get our students back in the classroom.”

He also touched on his budget proposal, which is absorbing a drop of more than $400 million in projected revenue by sweeping nearly $100 million out of a rainy day fund and eliminating about 152 vacant positions. Spending levels are $187.2 million below what they are in the current budget cycle.

Sisolak noted that his recommended budget proposes restoring cuts made to the state’s budget over the summer, which included a 6 percent rate reduction to Medicaid and slashing $25 million from UNLV’s School of Medicine.

“As a result of the efforts we’ve made, our revenue never went as low as our worst projections — and that is why my recommended budget calls on the Legislature to restore the rate reductions to support Nevada families and providers,” Sisolak said.

In a pre-recorded video message released in tandem with Sisolak’s address, Assembly Republican Leader Robin Titus criticized the state’s “draconian policies” in responding to the COVID-19 pandemic, while emphasizing the need to expand public-private partnerships and protect existing industries such as mining and tourism.

"Any blanket government shutdown is not sustainable and threatens the livelihood of many Nevadans still trying to recover from the first mandatory shutdown," Titus said. "We need to continue focusing resources in growing business and creating jobs without overbearing government interference, in a safe and responsible manner."

The Republican Assembly leader denounced any attempt to change Nevada's tax structure, calling potential modifications "irresponsible and shortsighted," warning that increased taxes — such as the initiative petitions backed by the Clark County Education Association to raise the sales and gaming taxes — would "hurt Nevada families." Sisolak did not, however, address any potential tax increases during the upcoming legislative session in his address Tuesday night, and no tax increases are included in his budget.

Sisolak, asked Tuesday night during a press call whether raising taxes is on the table during the upcoming legislative session, noted that the state is still in an emergency budget situation.

Titus called attention to "an all-time low" in Nevadans' confidence in electoral integrity, even though the secretary of state’s office and other election officials have found no evidence of mass voter fraud in the state’s 2020 election. She said that Republican lawmakers would be bringing forward new bills designed to increase confidence in the state's election process.

"Voting is a pressure relief valve that maintains stability and peace in a democracy by keeping politicians accountable," she said. "But for it to work, the citizenry must trust only legitimate votes are counted. Votes are the currency of our democratic republic and must be respected."

The Republican leader also called for lawmakers to work together in a bipartisan manner, referencing the failed coup at the nation’s Capitol.

“This year, as elected representatives and civic leaders of Nevada, now more than ever, we shall resolve to conduct ourselves better than what we see in Washington, to leave the paralyzing hyper-partisanship at the door, and to work together across the aisle, not as Democrats and Republicans, but as Americans and Nevadans,” Titus said.