Sisolak: No new mining taxes during special session; bars and water parks pose a ‘big problem’ in fight against COVID-19 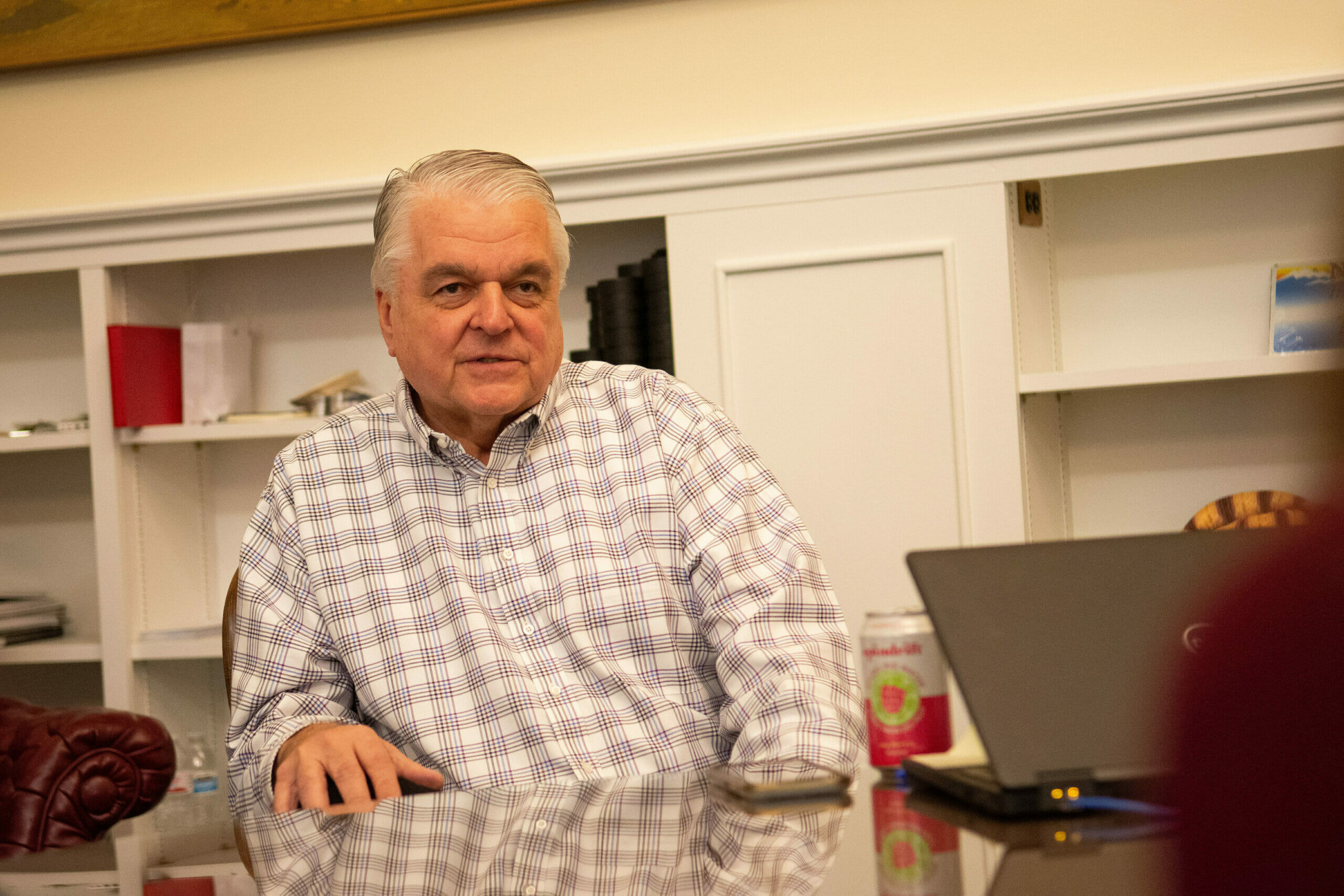 As a special session to shore up the pandemic-battered state budget gets underway, Gov. Steve Sisolak spoke to The Nevada Independent on Wednesday about what tax legislation he might support and how he might respond to a rise in COVID-19 cases.

Sisolak said he’s spoken with Democratic legislative leaders about what tax sources could potentially be raised to help offset expected massive budget cuts, but said it was dependent on a state Senate Republican to cross party lines and vote for a tax increase to clear the constitutional two-thirds majority needed to raise revenue.

Here are some highlights.

Budget cuts in the special session

Sisolak’s team released a proposal on Monday detailing the $1.2 billion in spending cuts, transfers and other changes needed to balance the state’s 2021 fiscal year budget after tax revenues plummeted during the COVID-19 business shutdown.

Lawmakers are poised to go over Sisolak’s proposal and are free to make any changes before sending it back to the governor for final approval. He said that at this point, he had not identified any “holy grails” — such as the Distributed School Account for K-12 funding or per-pupil dollars to school districts, neither of which was proposed to be cut by the governor — that would result in an automatic veto.

“Every department is going to feel some of this pain, but whatever they (the Legislature) decide to do, they're the ones that will send it back to me and hopefully we can come up with a plan to minimize it,” he said.

Sisolak said the budget cut process for this special session had come together quickly, and while his team had tried to “minimize” pain, he was willing to see whether lawmakers had any clearer ideas on how to balance the budget.

“Our budget was cut by a quarter,” he said. “You can't do that and not have impacts on programs. That's what we had, and if they'd like to make some adjustments and massage those numbers and move things around. I'm willing to listen to them.”

In his initial, 40-page budget briefing document released earlier this week, Sisolak wrote that he would be willing to consider “augmenting” existing taxes to help raise revenue to lessen the blow of the budget cuts, but did not want to implement an entirely new tax structure.

On Wednesday, he said that he and Democratic legislative leaders had discussed a wide variety of tax sources — from the payroll tax to the Commerce Tax (on gross business revenue) to taxes on alcohol and cigarettes — but that the discussion was an “exercise in futility” unless a Republican state senator was willing to vote for a tax increase. Democrats are one seat short of the two-thirds majority needed to raise taxes under the state’s Constitution.

“We're going to see if somebody on the Republican side thinks these cuts to education are so severe that they're willing to step up and take a stand, and stand up for students,” he said.

Sisolak said any tax increase would depend on what a hypothetical Republican state senator was most comfortable with, and that he was “anxious to see what they come back with.” But he said he did not plan to personally lobby or ask any senators for their vote on a tax proposal.

Although left-leaning groups have long advocated for the state to raise its tax rates on mining — which are partially set in the state Constitution — Sisolak said he didn’t think any change in the mining tax rate would come quickly enough to make a difference in the current year’s budget.

“How long is it going to take to ... realize that revenue?” he said. “Now, could that be adjusted in a regular session? I'm open to anything, but some of this is more appropriately addressed during a regular session come February.”

AFSCME has recently put out press releases, initially complaining that Sisolak had not met with the union representing state employees and then saying Wednesday that in spite of meeting with the governor, they had not come to an agreement and were considering an unfair labor practices complaint. The union has asked for the governor to step back from a plan to furlough workers for 12 days a year.

“There’s only so much money to spend,” Sisolak said. “If they’re going to … take away furloughs, they’re going to have to find that money somewhere else, and I don’t know where to find it because we’ve cut every agency.”

He also said he’s disappointed that AFSCME feels its members aren’t being treated fairly and doesn’t understand why the union “chooses to basically deal with this in the press,” adding that “we had a good relationship.”

Sisolak signed legislation last year allowing state employees to collectively bargain, although it retained for the governor the power to override any demands with a price tag, such as those on salaries and benefits.

Other items to take up in a special session

Sisolak was more coy on what items might be included on the agenda for a potential second special legislative session, dedicated to deal with specific policy issues, after lawmakers wrap up the budget discussion.

The governor said he only wanted to bring up topics that were so pressing they could not wait until the normally scheduled legislative session in 2021. He said criminal justice reform issues, which have taken a new prominent light after the killing of George Floyd by police in Minneapolis, will “probably or could very well get addressed during the special session.”

Asked whether he would sign legislation undoing SB242 — a bill sponsored by Senate Majority Leader Nicole Cannizzaro in 2019 that expanded protections for police officers accused of misconduct — Sisolak said he had to wait and see what the Legislature sends to him.

“A lot has changed in the world, in our country, since we signed that bill,” he said. “That’s an issue of extreme importance, but I don’t know how far they want to go with 242. Totally removing it? If it’s massaging it? I don’t know.”

He said policy issues would depend on legislative discretion and he wasn’t sure how specific any forthcoming proclamation for another special session might be.

“We’re having discussions with leadership,” he said. “How far we’re going to open it up, we haven’t decided yet.”

As for possible election changes, Sisolak was similarly mum on any specific plans (including whether he wanted a desire for the state to move to an all-mail election for the November general election), but said he does “not want people standing in line for four or five six hours in order to be able to vote, so we're talking to the counties and the registrars to come up with a plan.”

Sisolak said bars, pools and water parks have posed a “big big problem” when it comes to complying with mask-wearing and social distancing directives, as have gyms and some dine-in restaurants. Meanwhile, salons are a bright spot for following the directives.

“Some of them have gone out of their way to follow the directives,” he said of businesses. “There’s some that are just very very resistant and don’t want to follow the rules, and they’re going to make it difficult for everybody.”

When asked if there was a certain rate of hospitalizations that would prompt him to roll back the state’s reopening, Sisolak didn’t give specific numbers, but said he’s paying close attention to hospitalizations and whether Nevada has the capacity to accommodate any surges.

He noted that with the increase in testing and also contact tracing, which is directing a more targeted group of people to get tested rather than the general population that may have a low risk of exposure, case counts are predictably going up. He said he was heartened that the severity among those cases is not as bad as the group that emerged earlier in the pandemic, and many do not require hospitalization.

“I’ve got to make sure that the hospitals can flex up and provide services to all those people. It's not just the rooms, it's the medical professionals, it's the [personal protective equipment] that's necessary, it's all the therapies that might be used. That's the one that I looked at most closely at,” he said. “I'm very concerned about the way it's going to stretch our health care system in the hospitals.”