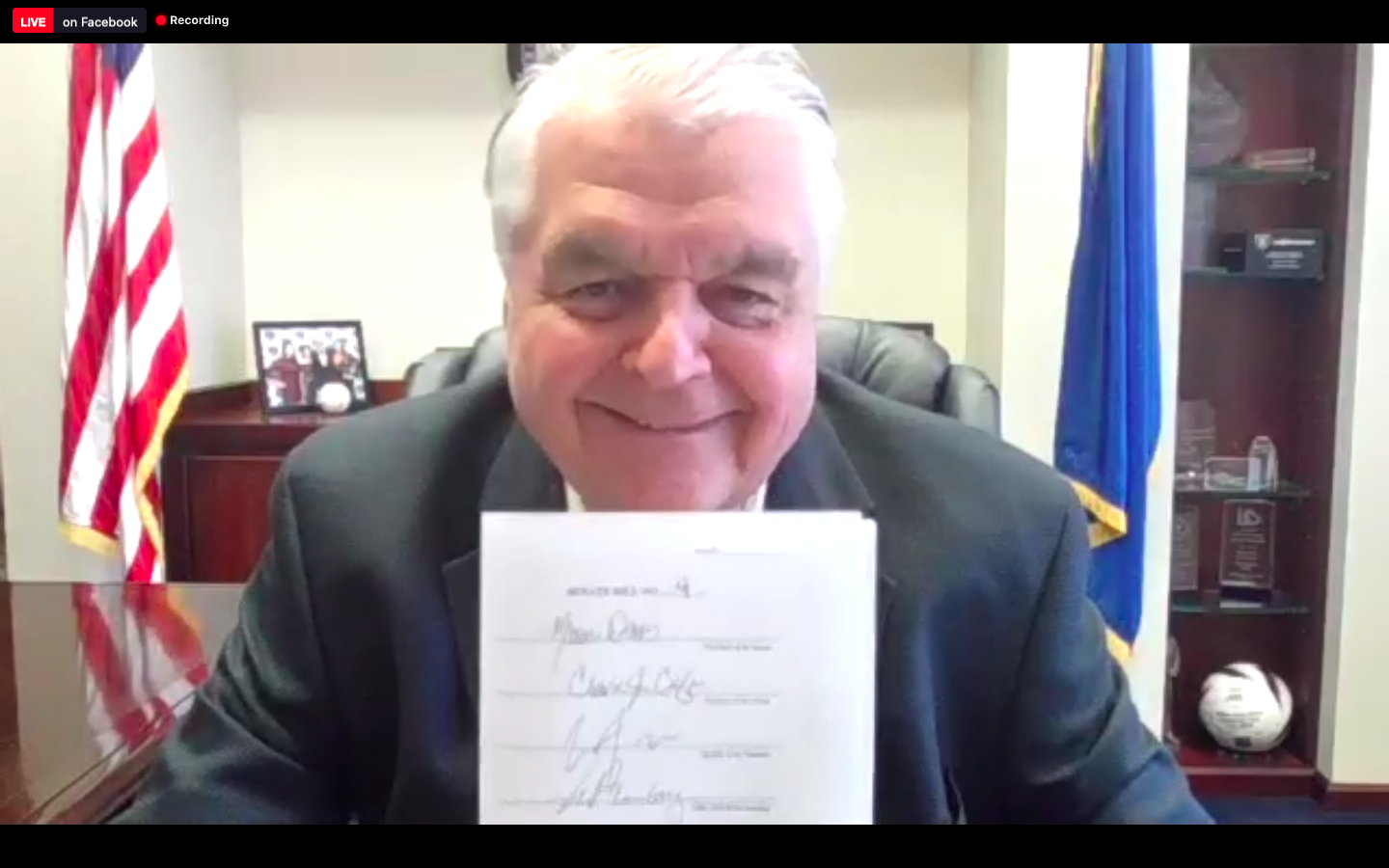 Gov. Steve Sisolak signed a bill on Tuesday that shields most Nevada businesses from “frivolous lawsuits” related to COVID-19 — a measure backed by some of the state’s most influential political voices including the tourism and gaming industry and the Culinary Union, but opposed by progressive groups and the entities that were left out.

Although it has been lauded by gaming and business interests, SB4 has been criticized for its exclusion of schools, hospitals and other health services from the same liability protections granted to casinos, non-profits, and other government entities. Sisolak on Tuesday said the “first in the nation” legislation was the “result of literally months of compromise” between labor groups and the hospitality industry.

“This bill isn’t about economic expansion, it’s about our state’s economic survival. It’s about acknowledging that Nevada relies heavily on a single industry- the hospitality industry,” Sisolak said. “But it’s not just about protecting the businesses, it’s also about protecting the workers that keep this industry, and our economy, running.”

Businesses, nonprofits and other organizations must adhere to government-imposed health and safety standards meant to prevent the spread of the virus in order to qualify for the protections granted by the bill. Enforcement of these regulations is meant to prevent “bad actors” from avoiding legal consequences.

“This legislation does not create an impenetrable shield for businesses who fail to protect their employees, their customers and their visitors,” Sisolak said.

Sisolak signed the bill on a live Zoom broadcast after delivering his remarks. Representatives of the Culinary Union and MGM also spoke during the press conference.

The Culinary Union, a political powerhouse that represents Nevada’s casino workers, pushed hard for the bill as a way to encourage casinos to adhere to stricter safety regulations. Union officials had sought those high standards in honor of Adolfo Fernandez, a Culinary Union member and utility porter at Caesars Palace, who died after contracting the virus in June.

His daughter, Irma Fernandez, was present at the bill signing news conference, representing the Culinary Union along with Geoconda Argüello-Kline, the union’s secretary-treasurer. Fernandez got choked up speaking about her father during Tuesday’s Zoom meeting, saying that her family is “honored” to have the bill signed in honor of him and that he would have been happy with the new protections.

Argüello-Kline also spoke proudly of the bill and the protections it puts in place for those in the hospitality industry.

“Today when we see that this law has been signed by the governor, and we know that we’re going to help 280,000 workers, we feel very, very proud because this is something, these workers, they need,” she said.

President of the American Gaming Association Bill Miller released a statement applauding the passage of the bill and urging Congress to pass similar legislation at a national level.

"This is truly a national crisis. It is incumbent upon Congress and the administration to follow Nevada’s leadership and enact timely, targeted, and temporary liability relief provisions to safeguard responsible actors against frivolous lawsuits," he said.

Supporters argue that the bill is necessary to protect gaming, an essential part of the state’s economy.

Those in the health care industry have criticized the bill both for excluding hospitals and other health services and for placing an additional burden on health districts, which are now expected to conduct regular inspections of hotels to ensure they comply with new regulations.

Representatives from Nevada’s two major health districts say they were not consulted when the bill was written and are concerned both about their already over-extended facilities being further strained by the new expectations and by the funding appropriated by the bill, which only extends through the end of the calendar year.

There has also been concern from school districts over the exclusion of K-12 public and charter schools, which were removed from the bill in an amendment which also added language guaranteeing protection to groups such as credit unions and private nonprofit organizations. Officials have expressed worries that the law will expose schools to the risk of lawsuits which could further strain already limited budgets.

While the bill protects a variety of businesses and nonprofits, additional health and safety measures were added only for hospitality workers. When asked why protections for workers in other sectors had not been included in the bill’s text, Sisolak did not provide an explanation, instead saying that the hospitality workers’ protections were a result of the Culinary Union approaching him directly.

This story was updated August 11, 2020 at 4:21 p.m. to include a statement from the American Gaming Association.