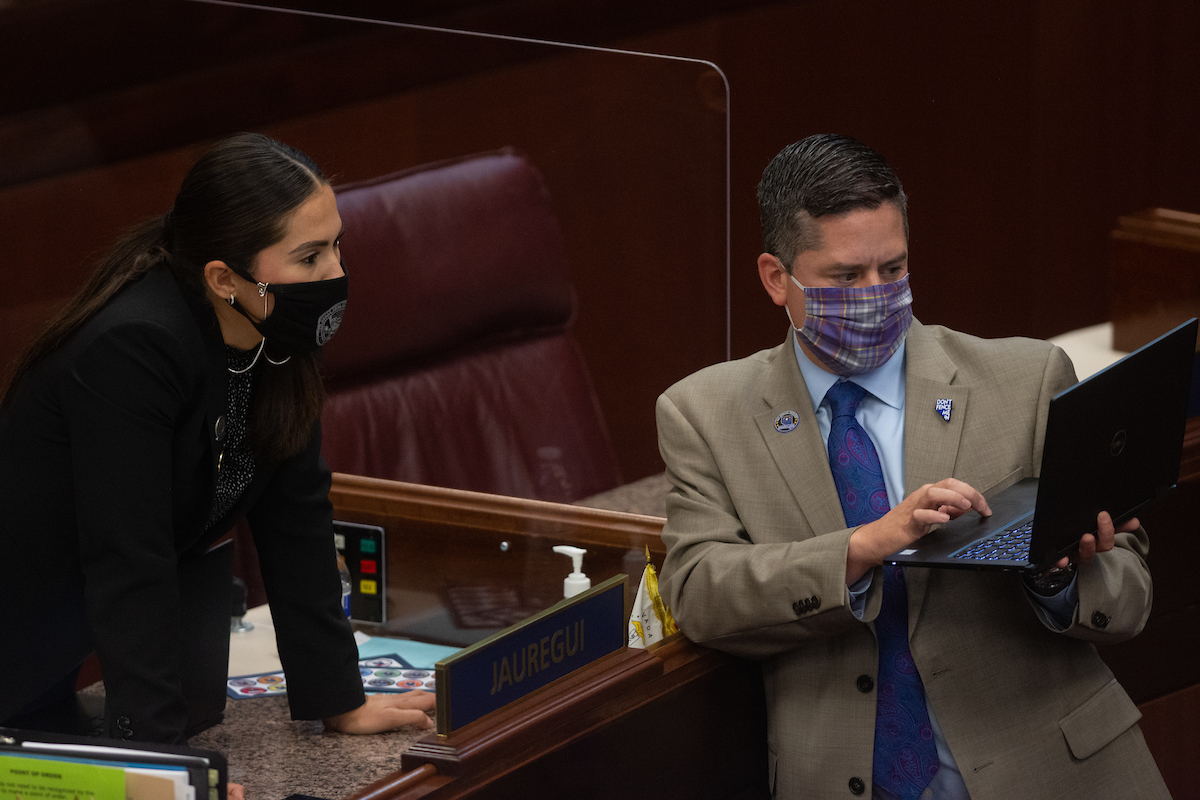 Lawmakers ended the second special session of the summer shortly after midnight on Wednesday after passing a heavily lobbied bill that shields many businesses from COVID-19-related lawsuits but ultimately exempted school districts, hospitals and other health care facilities from receiving the additional protections.

Members of the Assembly, after a five-hour hearing Wednesday night, voted 31-10 to grant final approval to SB4, the last major piece of legislation to advance in the special session. It mandates certain health and safety protections for hospitality workers, in addition to granting broad liability protections to nearly all businesses, governmental bodies and nonprofit groups in the state so long as they follow required local, state and federal health protocols.

Several lawmakers described the vote as one of the most difficult of their legislative career, saying it was born of backroom deals and seemed to arbitrarily cut out important segments of the workforce. But supporters said they ultimately settled on the bill out of recognition that gaming is the lifeblood of the Nevada economy.

"Ultimately it comes down to one thing: I don't want to be back here in a few months trying to figure out where to find money on the backs of the most vulnerable among us to fill another $1.3 billion budget hole,” said Democratic Assemblywoman Shannon Bilbray-Axelrod. “We talk all the time about how we need to diversify our economy but the fact remains we are still a one trick pony — gaming and tourism fuel our economy.”

In effect, the bill means that most regular businesses will be relatively protected from lawsuits if a customer contracts COVID-19 on the premises, so long as the company is following local, state and federal health mandates, such as ensuring that patrons are wearing masks. Customers will still be able to sue, but they’ll have to meet a much higher threshold for a court to allow their case to move forward.

The legislation also establishes protections for casino industry workers and outlines enhanced cleaning policies that large casino companies must follow, provisions the politically powerful Culinary Union has been long pushing for. Adolfo Fernandez, a Caesars Palace utility porter and Culinary Union member, died after contracting the virus in June, and his daughter, Irma, tearfully testified that she was carrying on a mantle of worker protection at his direction.

The two proposals were married together as SB4 in order to ensure that businesses — including gaming companies — and casino workers alike received the protections they wanted.

However, while that mechanism ensured buy-in from some of the most politically powerful interests in the state, others were excluded from the process of drafting the bill. Hospitals and other health care facilities bemoaned their exclusion from the bill, schools argued against a last-minute amendment excluding them from liability protections and local health districts questioned why they weren’t consulted over new provisions that give them an enhanced oversight role over hotels.

“I share, like many of my colleagues, sentiments that this bill picks winners and losers and gives preferences to some special interest groups,” said Assembly Minority Leader Robin Titus. “I am very disappointed and hope that future legislatures will be able to right the wrongs that are being done today.”

During a lengthy public comment period, hospitals and health care workers warned that excluding health care facilities from liability protections would lead to them having to exclude vendors and visitors to hospitals, as well as think twice about transferring patients to lower-level facilities and threaten their ability to keep beds open during a pandemic.

“If we are following clear rules from the government, and in our case CDC guidelines, we should not be excluded,” said Bill Welch, CEO of the Nevada Hospital Association. “By excluding medical facilities from this bill, access to patient care will be impacted.”

Representatives of Gov. Steve Sisolak’s office tried to point to an emergency directive from April extending additional immunities from liability to providers of medical care engaged in the state’s COVID-19 response as justification for why hospitals and other health care facilities were excluded from the bill’s liability protections.

However, Legislative Counsel Bureau General Counsel Kevin Powers told lawmakers Wednesday night that whether those additional immunities extend to health care facilities — not just their workers — is an “open question.”

“We cannot say that [the directive] provides medical facilities with the same immunity that their workers enjoy under [state law],” Powers said.

It also remained unclear as of Wednesday night who was responsible for health care facilities being excluded from the bill’s liability protections. During a hearing on the bill in the Senate early Tuesday morning, Brin Gibson, Sisolak’s interim general counsel, said the legislation was a byproduct of “some of the most important members of Nevada’s economy,” a point that several Assembly members asked about during the hearing on the bill.

Pressed during Wednesday’s hearing on who those “important members” were, Gibson demurred.

“There were myriad interests that were involved in the negotiation of this bill, from the travel and tourism industry, primarily, but there were a number of different interests,” Gibson said. “I don’t have a list.”

Sisolak’s staff, on Wednesday, acknowledged that the move was a policy decision from the governor’s office but offered no explanation as to why exactly hospitals had been excluded, other than that they believed that the facilities have enough existing protections.

At another point, the governor’s office suggested that putting in place liability protections would have been too difficult.

“This bill is around health and safety for public accommodations and also for businesses,” said Francisco Morales, a governor’s office staffer who presented the bill alongside Gibson. "To try and tackle liability protections for hospitals and medical providers ... would’ve been extremely complex, and I just want to go back and say that there are already robust protections under (state law).”

An amendment introduced early Wednesday carved out K-12 school districts, including charter schools, from the enhanced liability protections in the bill — a concession celebrated by two of the state’s largest teacher unions, the Nevada State Education Association (NSEA) and Clark County Education Association.

Democratic lawmakers initially pitched the amendment as a way to ensure school districts would be more cautious about sending teachers back to school without high health and safety standards in place. Democratic Sen. Julia Ratti said it would “put our schools in the position of having to think just a little bit harder about the safety standards that they're providing.”

Legislative legal staff told lawmakers that schools would still be able to use normal litigation immunity offered under existing law, but several school districts said the lack of enhanced liability standards would open them up to liability and that they should be treated the same as other governmental entities.

“If employees and students choose not to follow health and safety standards outside of school, the district shouldn’t be at fault for their actions,” Nevada Association of School Boards President Bridget Peterson said in written testimony. “The potential lawsuits will be costly and put school districts in a financial risk at a time where our budgets are being reduced and expenses are increasing.”

Churchill County School District Superintendent Summer Stephens said districts were working hard to ensure that they could address health and safety issues as they arose and that the enhanced liability protections would put them in a better position in spite of existing liability protections written into law.

“Adding schools back into the bill does not mean schools will not protect their staff members,” she said.

In the end, NSEA lobbyist Chris Daly testified against the bill, saying that it wanted to show solidarity with workers who did not benefit from the measure.

The heads of Nevada’s two urban health districts said on Wednesday that they were not consulted as the legislation was being drafted, despite the fact that it newly tasks them with regular inspections of hotels to ensure compliance with COVID-19-related protocols and establishes a new enforcement role.

The health districts have also raised concerns that, while the bill appropriates additional funding to them, it only makes that funding available through the end of the calendar year. SB4 appropriates $2 million to the Southern Nevada Health District and $500,000 to the Washoe County Health District.

Michelle White, chief of staff to Sisolak, said that the governor’s office understands the health districts’ concerns about the time frame of the funding but that they are “completely confident” that the health districts “understand the critical nature of this work to protect Nevada’s employees and our economy.” She added that health districts already have existing authority and expertise with public accommodations, such as hotels, and so they seemed like an “obvious choice” to take on the new role.

“We are incredibly sympathetic with the health districts that they can do this as an expansion,” White said. “We will be a very strong partner with those health districts as we have been and can’t be more appreciative of the work and partnership that they’ve had thus far with us.”