Connecting the Dots: Opening up the nexus between lobbyists, campaign donors 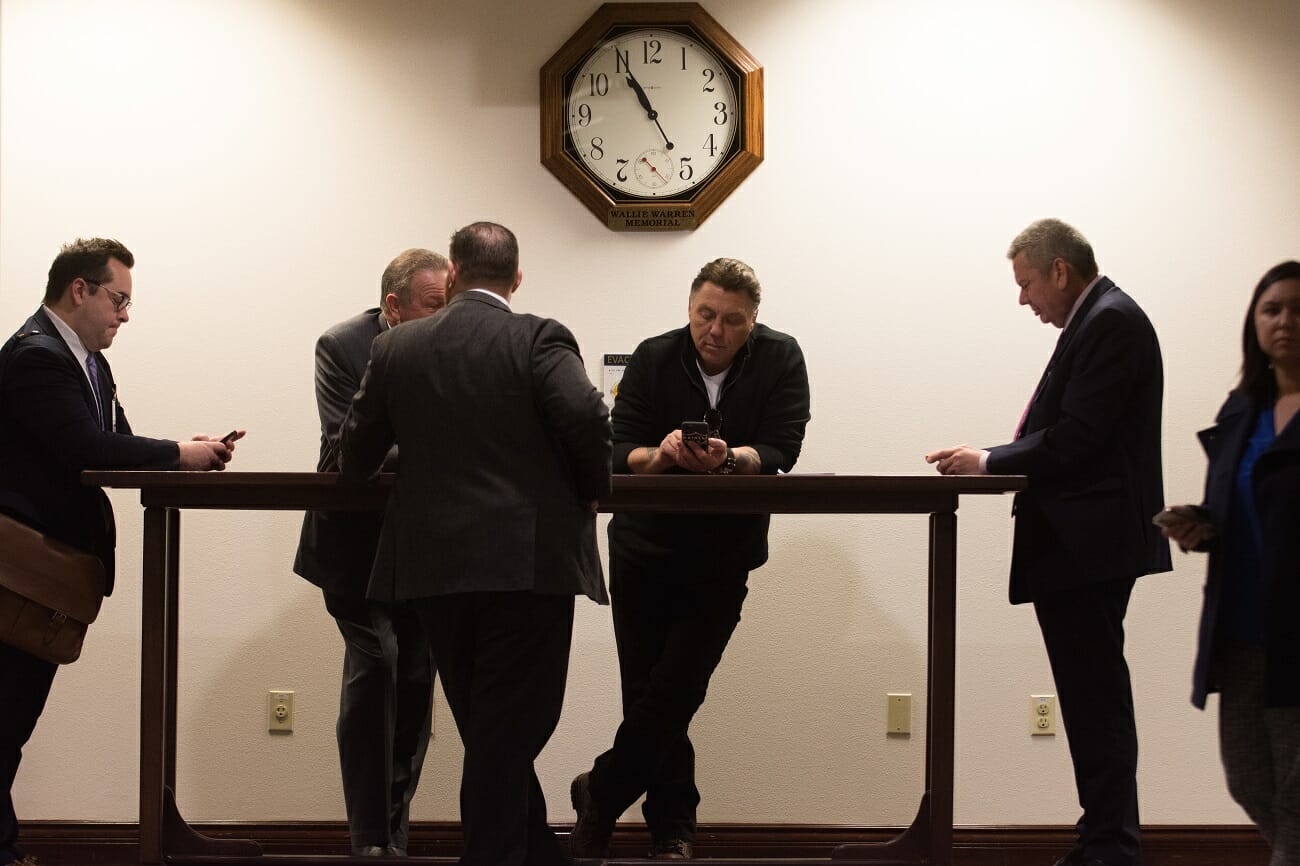 There’s one group of people wandering the halls of the Nevada Legislature that outnumbers reporters, lawmakers, and even legislative staff — the scores of nonprofit and for-profit lobbyists.

Since the last time The Nevada Independent looked at the online registry of lobbyists for the 2017 session, roughly 200 more have registered to lobby the 63 Nevada lawmakers.

The aggregate 559 registered lobbyists come from a variety of backgrounds and represent a wide swath of interests, from the well-paid professionals employed at big law firms to individuals who lobby only for themselves.

Using campaign finance data compiled between 2015 and the start of the 2017 legislative session, Nevada Independent reporters also connected each lobbying client to the total aggregate donations they gave to state legislators. Though we double and triple checked the numbers, if you see anything off or have any questions feel free to reach out to us at [email protected] or [email protected].

Here’s a list of some of the major lobbying players this session, former legislators or state employees turned lobbyist and any other registered lobbyists who caught our eye. Information in this story is current as of 7 p.m. on Feb. 18.

(To get the most out of the above chart, bump the number of nodes up to the full 489 in the upper left hand corner of the chart. Use your cursor to drag the dots around and zoom in and out.)

Griffin Company: The veteran lobbying outfit and law firm led by brothers John and Matthew Griffin, and Josh Griffin, is perhaps most known for helping electric car manufacturer Tesla obtain a massive package of tax incentives and breaks in 2014. In addition to the two brothers, the firm is also employing Chelsea Capurro, Morgan Coleman, Tia Dietz, Sarah Rossi, Christy Bauer as registered lobbyists this session. Their clients, who gave Nevada lawmakers $806,275 over the 2016 campaign cycle, include the following:

Lewis Roca Rothgerber Christie: Lobbying efforts for the firm are led by the two Alonso brothers. Alfredo Alonso is a longtime lobbyist and spent time as a congressional staffer for former Sen. Chic Hecht and Rep. Barbara Vucanovich. Mike Alonso is a lawyer specializing in “gaming and liquor licensing, land use, legislation and lobbying, and real estate transactions.” Garrett Gordon, who focuses on land use law, real estate law and government relations, is also lobbying for the firm. Clients of the firm gave lawmakers a total of $591,700 to lawmakers last cycle.

R&R Partners: A marketing, advertising, public relations and lobbying firm, R&R Partners was founded by in 1974 by Sig Rogich as R&R Advertising. Rogich was a senior media consultant for Ronald Reagan’s and George H.W. Bush’s presidential campaigns. Today, R&R is helmed by Billy Vassiliadis, the firm’s CEO, while Pete Ernaut heads up the lobbying wing. Its registered lobbyists this session include Ernaut, Michael Brown, Lorne Malkiewich and Nick Vassiliadis. In total, its clients gave $560,200 to lawmakers last cycle. They include:

The Perkins Company: The lobbying firm, led by former Assembly Speaker Richard Perkins, was founded in 2008 and has registered at least two additional lobbyists for the 2017 session — Colleen Platt and Brian Evans. They represent clients who gave $473,600 to lawmakers during the 2016 campaign cycle.

Carrara Group: The lobbying firm’s Carson City team is led by Rocky Finseth, the firm’s president and CEO, and is assisted by the company’s vice president Jenny Reese, a former policy analyst for the Nevada Association of Counties and lobbyist for the McMullen Strategic Group. The firm’s clients gave a total of $442,050 to lawmakers last election cycle.

Kaempfer Crowell: A Nevada-based law firm with offices in Las Vegas, Reno and Carson City, Kaempfer Crowell practices in a wide range of areas from gaming law to land use and zoning. The firm’s government affairs wing has three lobbyists this session, Shelly Capurro, Mark Fiorentino, Michael Hillerby and Jennifer Lazovich. Their clients gave a total of $420,545 to lawmakers over the 2016 election cycle. They include:

Brownstein Hyatt Farber Schreck: A multistate law firm with offices in Las Vegas, Reno and Carson City in Nevada, Brownstein Hyatt Farber Schreck offer a broad spectrum of legal services, from business law to energy and natural resources. The firm also has a lobbying wing that operates at the local, state and federal levels, with an office in Washington, D.C. Their lobbyists this session are Kandis McClure, former Republican Senate caucus director Jodi Stephens and Alisa Nave-Worth, former executive director of the Nevada Senate Democratic Caucus. Clients the firm is representing this session gave a total of $312,000 to lawmakers over the 2016 campaign cycle.

McMullen Strategic Group: Longtime Nevada lobbyist Samuel McMullen is again back with a long list of clients to represent in the 2017 session. The Elko native has been lobbying lawmakers since 1983, and is joined by George Ross, Sara Cholhagian, Colleen Hoch, Mayra Salinas-Menjivar, Connor Cain and Cassidy Wilson. They’ll be representing the following clients, who gave $234,600 to lawmakers through the 2016 election cycle.

Rowe Law: The firm, which specializes in government affairs and administrative/regulatory law, has three registered lobbyists this session: Russell Rowe, Jean Kvam and Alysia Peters. Their clients gave a total of $197,100 to lawmakers during the 2016 cycle.

Horne-Duarte: Founded in 2015, the firm of Horne Duarte is made up of former Assembly Majority Leader William Horne and Edith Gonzalez Duarte, a former intern for Assembly Speaker Barbara Buckley and lobbyist for the Perkins Group. The firm represents the following clients in the 2017 session, which gave $124,000 to lawmakers throughout the 2016 election.

Holland and Hart: This law firm has offices throughout the West including three in Nevada in Carson City, Reno and Las Vegas. They practice a wide variety of laws — including construction, health care and intellectual property — and also have a lobbying division. Their lobbyists this session include Edward Garcia, Shannon Hogan, Scott Scherer, Brittany Walker and Karen Dennison. Clients represented by the firm gave a total of $96,500 to lawmakers during the 2016 cycle.

Ferrari Public Affairs: The lobbying firm is lead by Chris Ferrari, a former R&R Partners executive and campaign advisor to Gov. Kenny Guinn. The group has registered at least three additional lobbyists in addition to Ferrari this session, including Joanna Jacob, Brandi Planet and Brian Reeder. Clients represented by the firm gave a total of $64,750 to lawmakers throughout the 2016 campaign cycle.

Crowley and Ferrato: This public affairs and lobbying firm is run by Tim Crowley and Jessica Ferrato. Crowley previously co-founded the Griffin Crowley Group, worked as a legislative aide to Sen. Harry Reid and served in Gov. Bob Miller’s administration. Ferrato is the former director of government relations for Pfizer, where she headed the company’s efforts in Nevada, Idaho and Utah, and previously worked with Crowley at the Griffin Crowley Group. Lucas Ingvoldstad and Paige Ritzman are listed as the company’s lobbyists this session. The firm’s clients gave $48,000 to lawmakers last cycle.

Greenberg Traurig Law: The international law firm operates its Nevada Government Law & Policy Practice out of its Las Vegas office, which offers an array of legal services from intellectual property to gaming. Their lobbyists this session include Kerrie Kramer and Jonathan Leleu. One of their clients, NAIOP, donated $6,250 to lawmakers during the 2016 cycle, and the firm itself gave $25,500.

Faiss Foley Warren: Linda Faiss, Helen Foley and Melissa Warren helm this public relations and government affairs firm, which represents a number of nonprofit, government, health care, technology and other interests. Of the three, only Helen Foley is listed as a registered lobbyist this session. The firm gave $6,000 to lawmakers last cycle. Its clients, none of whom outside the firm itself donated to lawmakers this cycle, include:

Hyperion Advisors: A Nevada-based law firm, Hyperion attorneys practice in a variety of areas, from election law and campaign finance to real estate development. The firm also has a government relations team, with Kristina Kleist, Dwayne McClinton, Erv Nelson and Neal Tomlinson lobbying for the firm this session. Hyperion Advisors directly gave $1,250 to candidates this cycle, with Tomlinson donating another $1,000. Only one of their clients, Payroll Funding Company, gave directly to lawmakers this cycle, a total of $1,000.

Giant conglomerates aren’t the only lobbying forces in the Legislature. Multiple smaller businesses, led by veteran lobbyists and former lawmakers are also an important part of the policy-making ecosystem.

Patrick McNaught: The Colliers vice president, who founded Kolesar & Leatham’s government affairs arm with Republican lobbyist Robert Uithoven and made bids for state Senate and Republican state party chair, is lobbying on behalf of a number of diverse interests, including the Laborers Union and Las Vegas Sands. His clients gave a total of $957,050 to lawmakers during the 2016 cycle. They include:

Bill Gregory: The former Republican assemblyman, who personally gave $1,100 to lawmakers ahead of the 2016 election, is representing a variety of industries during the 2017 session, including companies that gave $384,350 to lawmakers.

Lesley Pittman/Sierra Strategies: Pittman, a longtime former lobbyist for Station Casinos, founded Sierra Strategies in 2008 and represents a wide swath of candidates (which gave an aggregate total of $301,200 to legislators throughout the 2016 campaign cycle).

Richard Bryan: The former Nevada governor and U.S. Senator is currently employed with the law firm of Fennemore Craig, and registered to lobby for the following companies, who gave a total of $156,000:

Joseph Guild: This Reno lawyer (who gave $500 to one lawmaker during the last campaign cycle) is representing a number of different interests this session, which gave a total of $121,600 to lawmakers during the 2016 cycle. They are:

Paul Enos: Enos is the CEO of the Nevada Trucking Association, but he has expanded his lobbying portfolio this session to include a diverse set of interests, which gave a collected $101,000 to lawmakers last cycle. They are:

Leo Drozdoff: the former director of the state’s Department of Conservation and Natural Resources may have retired in September from public service, but is back in Carson City as a lobbyist for Albemarle Corp. and Comstock Mining. Albemarle Corp., a chemical company, gave lawmakers $9,000 during the 2016 campaign.

Tom Grady: A Republican who served in the Nevada Assembly between 2002 and 2014, Grady is a paid lobbyist for the City of Fallon.

Sheila Leslie: The former state assemblywoman who lost a nailbiter state senate race in 2012 is back in Carson City as a registered lobbyist for Washoe County Social Services.

The Nevada Independent accepts donations from anyone who wishes to support our work. Switch and MGM Resorts have donated $250,000 each, Caesars Enterprise has donated $50,000, Boyd Gaming has donated $25,000. For a full list of our donors click here.

9:35 a.m. - This story has been updated to add Leo Garcia to the list of lobbyists for Americans for Prosperity.