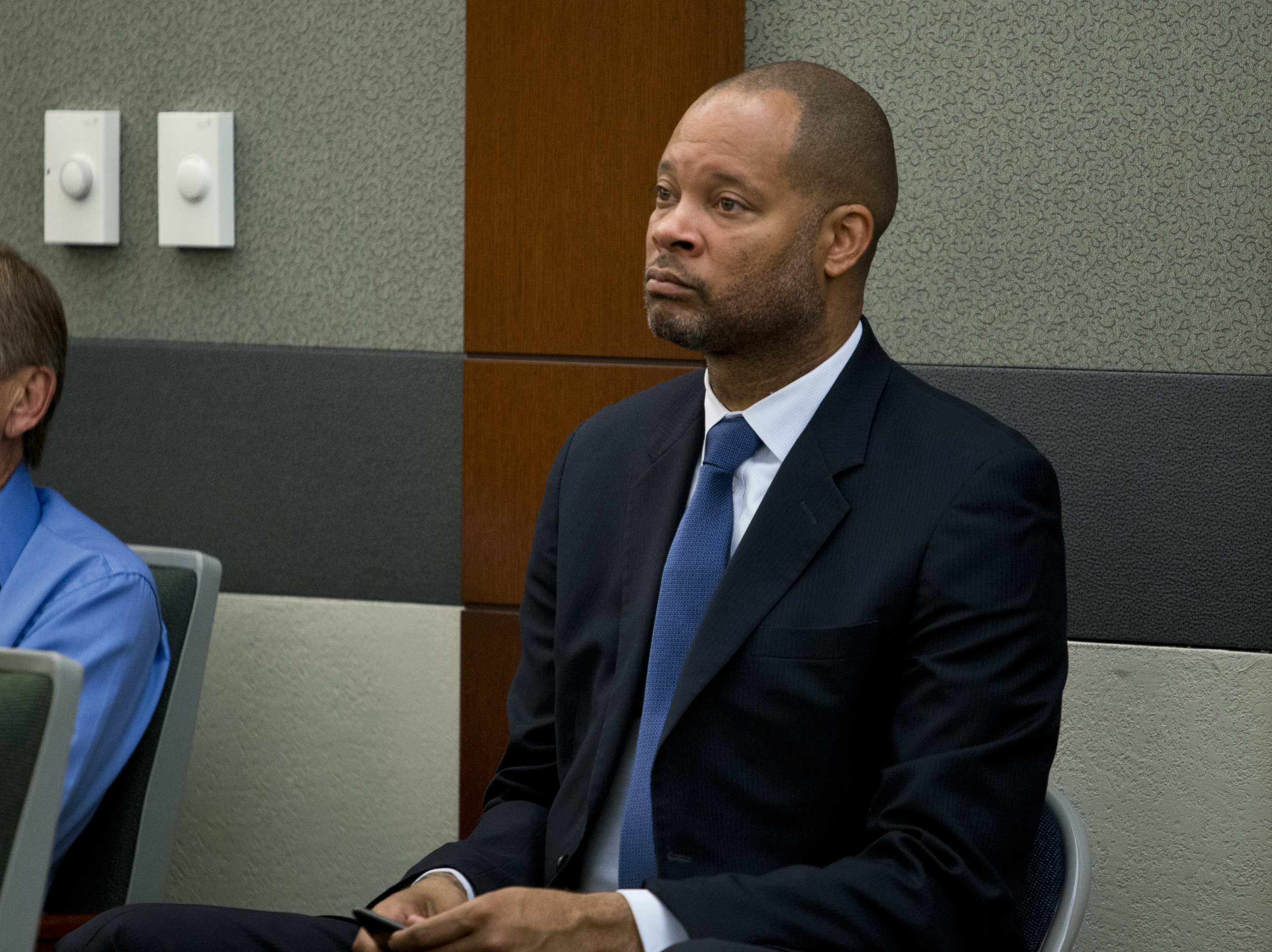 Democratic state Senate Majority Leader Aaron Ford helped pass a last-minute amendment in the waning hours of the 2017 legislative session that removed caps on fees awardable to outside law firms that contract with the state — an arrangement that could financially benefit his employer.

Ford, a partner at the law firm of Eglet Prince who is running for attorney general, helped push through a little-noticed conference committee amendment removing a series of caps on the fees recoverable from private law firms that enter into so-called “contingent fee” contracts with the state, according to a source involved in putting together the final version of the bill.

Although the bill undid a cap on the recoverable fees set in place in 2015 to curb alleged abuses of the contingent fee contract system, Ford said in a statement that the previous bill “unduly hampered” the ability of the state to attract effective legal representation in high-stakes cases.

“Outside counsel are extremely important in helping the state pursue remedies against bad actors who try to take advantage of hardworking Nevadans,” he said in a statement. “A determination was made at the end of the 2017 session that the previous law unduly hampered the state in its ability to attract and provide the best legal representation and consumer protection for Nevadans. It is our job to ensure that we put forward policies that protect our state and its citizens, which is why this amendment received bipartisan support and was signed by Governor Sandoval."

Contingent fees are a common type of legal arrangement often used in workers compensation or personal injury cases, where the attorney agrees to only be paid if he or she wins the case, and in turn agree to be paid a percentage of the recovered damages ahead of time. States also have begun using similar contracts, most notably in cases brought against major tobacco companies in the 1990s, though some legal experts and former attorneys general have criticized the practice of outsourcing a state’s litigation powers to private firms.

"This has gotten out of hand," former Massachusetts Attorney General Scott Harshbarger told the New York Times in 2014. "And it seriously threatens the perception of integrity and professionalism of the office, as it raises the question of whether attorneys are taking up these cases because they are important public matters, or they are being driven more by potential for private financial gain."

SB69, a bill filed on behalf of the governor’s office, dealt primarily with changes to regulatory boards and professional licensing, including reciprocity of occupational licenses from other states, term limits for members of regulatory bodies and prohibiting those bodies from entering into contingent fee contracts with outside law firms.

But an amendment filed on June 5 — the last day of the 120-day legislative session — included a change that removed a series of caps on contingent fees on amounts recoverable in a lawsuit, including a cap of no more than $10 million on recoverable fees for the outside law firm.

Instead, the new version of the bill — which was signed into law by Republican Gov. Brian Sandoval — sets an upper limit of 25 percent of the total amount recovered as a contingency fee for an outside law firm that contracts with the state.

The bill passed unanimously out of both houses of the Legislature, though the two Republicans on the conference committee — Sen. Heidi Gansert and Republican James Oscarson — voted against the bill, citing concerns with the lack of an upper limit on the recoverable fees.

In an interview, Gansert said she was first presented the amendment during the conference committee, with only a few minutes to review it before voting on it.

“I was concerned about the cost to the taxpayers,” she said. “It was a significant change.”

In an email statement sent through a spokesman, Robert Eglet — the senior partner at the firm — said that the bill restored the ability for the attorney general to contract with outside law firms at favorable rates, and said the change was made in part because he was told Attorney General Adam Laxalt had expressed interest in contracting with an outside firm to sue opioid manufacturers on behalf of the state.

A spokeswoman for Ford declined to say on the record if Eglet had lobbied him to include the amendment as part of the bill. A spokeswoman for Laxalt didn’t immediately return a text seeking comment.

The new limit is also higher than what the state previously charged on similar contracts — according to a 2010 study by the law firm of Husch Blackwell, Nevada typically offered outside firms a return between 10 to 15 percent of the recovered damages on contingent fee contracts.

Unlike normal amendments, which are typically introduced and voted upon by a full committee, conference committee amendments arise when the Assembly and Senate approve differing amendments to a bill, which requires legislative leadership to appoint three members from each house to reconcile differences between the two versions of the bill. Although they can technically occur at any point during the 120-day session, conference committees are usually scheduled and held during the last 48 hours of the Legislature.

Major changes made on the hectic last day of the Legislature are not unusual — the last day of the 2017 session saw the introduction and passage of a $28 million pay bump for state workers, a major change to confidentiality in the gaming regulatory system and an updated sexual harassment reporting policy.

The change follows just two years after Republican state Sen. Greg Brower sponsored and passed a bill during the 2015 legislative session creating the caps on contingent fee contracts. Brower, during the presentation of the bill, criticized former Attorney General Catherine Cortez Masto for using “no-bid contracts, unlimited fees and virtually no oversight or legislative approval” on the contracts with outside law firms.

“There is an inherent problem with private lawyers doing government lawyers’ work that is quasi-prosecutorial in nature,” he said during a March 30, 2015 hearing on the bill. “When a government attorney believes a case has no merit, the lawyer’s duty is to dismiss the case. If the private lawyer, hired on a contingent fee basis, discovers the case does not have enough merit to pursue and dismisses the case, the lawyer does not get paid. Whereas the government lawyer has no disincentive to dismiss a lawsuit lacking in merit, a private lawyer has little incentive to do so because he or she will not be paid as a result.”

Cortez Masto was criticized in a $1 million television advertisement campaign during her 2016 U.S. Senate race for using the contracts, including arrangements with the Washington D.C. based firm of Cohen Milstein which received more than $12.7 million from settlements negotiated on behalf of the state between 2009 and 2014.

Democratic Sen. Tick Segerblom, who served on the six-member conference committee that approved the amendment, said he didn’t remember who brought the amendment forward but that it was intended to fix issues with the 2015 bill, which he called a political attack against Cortez Masto.

“It prohibited a lot of law firms from taking large cases because they couldn’t live with what the caps were,” he said.

Although several Nevada jurisdictions, including Clark County, Reno, Lyon County and North Las Vegas have approved or are considering approving a contingent fee contract with Eglet Prince to sue about a dozen opioid manufacturers and distributors for damages related to state’s opioid crisis, the bill amended by Ford did not affect the ability of municipalities to enter into the contract — only the state itself.

"Any firm in Nevada could seek to help the state under the changed law,” Ford said in a statement. “No one law firm would receive additional benefits above and beyond any other attorney or firm in the state.”

Ford, who was first elected in 2012, began working as a partner at Eglet Prince in October 2015. He told the Las Vegas Review-Journal in December that he would resign from the firm if elected attorney general in 2018.

Correction April 4, 2018: Corrected to reflect fact that Robert Egelt was told Attorney General Adam Laxalt was interested in contracting with an outside firm over opioid litigation.