Economists predict Nevada will bring in $140 million more than expected; lawmakers mulling how to spend it 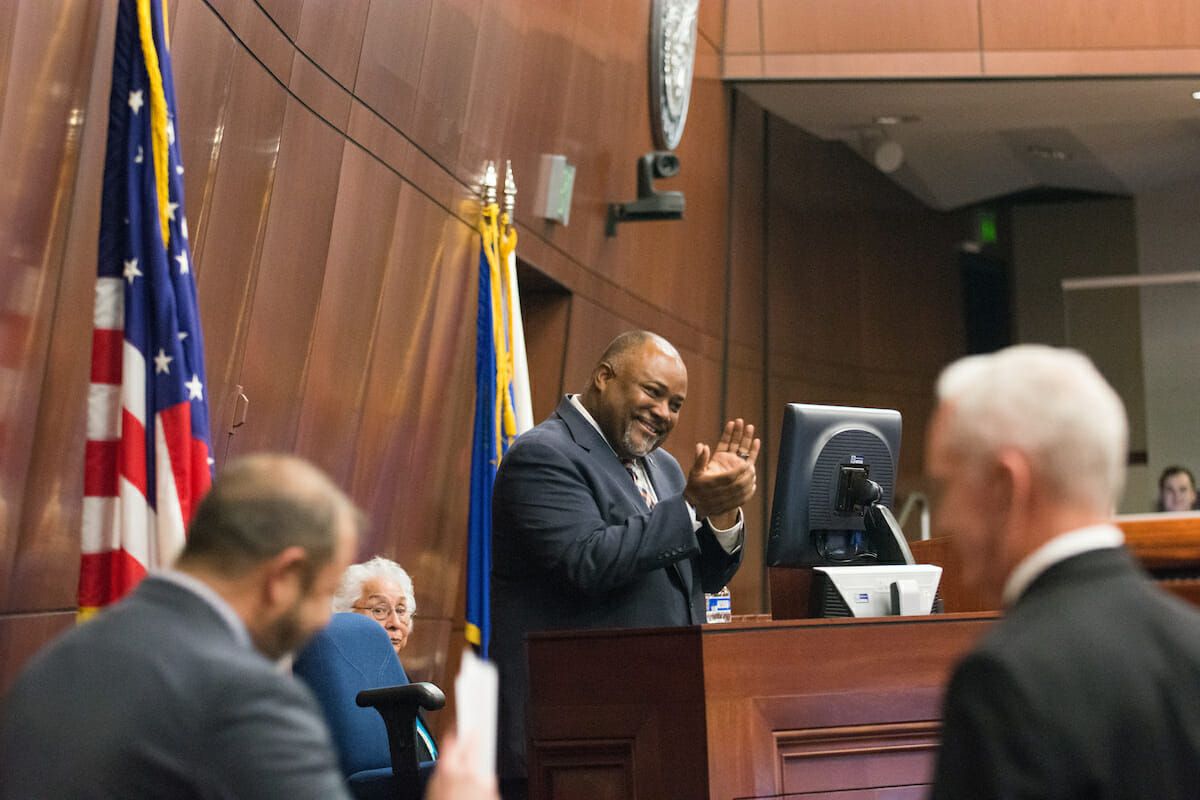 Nevada legislators will have $95.7 million more than initially expected to spend on the state’s two-year budget after the state’s Economic Forum approved final revenue forecasts on Monday — and an extra $44 million for the current fiscal year.

Economists projected growth in all major revenue sources — except the casino-based Live Entertainment Tax and sales taxes — relative to their December forecasts, saying the economic picture has noticeably improved even in the past five months. They also upgraded their projection for the current biennium, predicting the state will end the fiscal year with $44.2 million more than expected in December.

“Nevada was hit about the hardest of any state during the recession and has come back just about better than any state,” forum member Ken Wiles said at the conclusion of the meeting.

Forecasted increases brings total state revenue for the 2017-19 biennium up to $7.89 billion after subtracting hundreds of millions of dollars the state forgoes through tax breaks aimed at sweetening the pot and attracting businesses to Nevada. The updated revenue figures are a 1.2 percent bump in tax revenue over the December forecast.

Forum members were cautiously optimistic about the state’s future economic growth, with Department of Employment, Training and Rehabilitation economist Bill Anderson projecting that the state would add roughly 33,000 additional jobs by the end of 2019. The present number of jobs slightly exceeds the pre-recession peak.

But others painted a less rosy economic portrait, especially on a national level. Forum members noted that certain revenue projections — notably the tax on insurance premiums — are shaky given the unclear future of the Affordable Care Act.

“We do of course make these forecasts under the umbrella of a somewhat uncertain fiscal and monetary environment coming out of Washington,” Wiles said. “Those uncertainties include anything from health care to fiscal stimulus, regulatory environment and I would guess just about everything else.”

Lawmakers have been operating off a December forecast of how the state’s tax streams will perform in the upcoming biennium. Nevada’s Constitution requires a balanced budget in which the state doesn’t spend more than it expects to bring in.

The above-projection money in the 2017 fiscal year can be used for one-shot spending in the current year, or can boost the ending fund balance and carry over into the next biennium, depending on how lawmakers decide to use it.

Democratic Senate Majority Leader Aaron Ford said that Democrats haven’t specifically decided how to use either the additional funds for the existing fiscal year or the nearly $96 million on top of the governor’s proposed two-year budget, but stressed any increases in spending would come in categories identified in the “Nevada Blueprint” policy wish list, such as increased education and mental health spending.

“There’s going to be a lot of people trying to grab at this and utilize the funds because they view it as extra,” he said. “I view it as essential.”

Republican Gov. Brian Sandoval described the forum’s projections as “reassuring,” but called for a significant chunk of the increased revenue to bolster the state’s K-12 educational funding formula.

“We do have unanticipated demands in corrections and emergency response, however I would like to see a majority of this new revenue go directly to education, specifically to students in K-12,” he said in a statement. “I introduced the weighted student funding formula last session and this additional money provides a unique opportunity to invest directly in students who are economically disadvantaged, English learners, gifted and talented, and in special education.”

“Today’s budget forecast confirms one important thing – the reforms put in place by Governor Sandoval and Assembly Republican Leadership are working,” he said. “Placing any additional burdens or obstacles on our economy will stunt our growth.”

How are Nevada’s major taxes performing?

Sales and use taxes account for about 30 percent of general fund revenue and are the biggest funding stream. Revenue from these taxes is expected to climb by more than 5 percent in each of the next two years. In December, the Economic Forum predicted these taxes would yield $2.37 billion in the 2017-2019 biennium, but the panel reduced their prediction by $1.6 million on Monday.

Much of the discrepancy comes because the Tesla Gigafactory in northern Nevada is generating high volumes of taxable sales, but is exempt from sales tax as part of a deal lawmakers negotiated to attract the battery plant to the state.

Russell Guindon of the Legislative Counsel Bureau’s Fiscal Analysis Division said the economy is firing on all cylinders, but “some of the firing isn’t going to generate collections.”

Gaming taxes are the second biggest source of general fund revenue, comprising 18.5 percent. Revenue is projected to rise in each of the next two years. Gaming taxes were expected to yield about $1.498 billion in the next biennium, and the Economic Forum increased that projection Monday by $17.9 million.

Economists pointed to a higher table game win and an increase in the hold percentage -- the amount of money gambled that the casino keeps. They also say stronger wage growth should drive more slot play.

The Modified Business Tax, also called the payroll tax, accounts for 13.2 percent of general fund revenue. It’s expected to increase by more than 5 percent in each of the next two years. December’s Economic Forum analysis predicted $1.29 billion in revenue from this tax over the next two years, while the May projection increased that by $21.3 million.

Wage growth and employment numbers prompted economists to push up their predictions.

The Insurance Premium Tax makes up 9.4 percent of general fund revenues. It’s slated to grow by between 3 and 4 percent in each of the next two years, and was projected in December to bring in $788 million in the next biennium.

The Economic Forum’s latest projection is $18.3 million higher than the December forecast.

One major variable will be what the Trump Administration and Congress decide to do about the Affordable Care Act, which would likely affect how many people buy insurance and the amount of their taxable premiums.

The Live Entertainment Tax from gambling establishments accounts for 3 percent of general fund revenues. It’s expected to increase by about 3 percent in each of the next two years and yield $222.5 million in upcoming biennium.

The Economic Forum downgraded its forecast by $6.5 million because the tax no longer  applies to food and beverages at casino venues and the maximum tax rate has been reduced to 9 percent. However, Live Entertainment Tax collections from non-gaming entities are on the rise as the restructured tax now applies to events such as music festivals and Burning Man, and events held at the newly opened AT&T arena in Las Vegas.

The Real Property Transfer Tax is collected when a home or other property is sold; it makes up 2 percent of general fund revenue. It’s projected to increase by between 3 and 5 percent in each of the next two years, and is forecast to bring in $172.4 million in the next biennium.

Members of the Economic Forum raised that projection by $4 million on Monday.

Experts say they’re surprised collections are still rising because home prices are going up, but the housing supply remains tight. They say it appears much of the growth in collections is coming from commercial property sales, where they have less data.

The cigarette tax comprises 4 percent of general fund revenue. Revenues are expected to decrease by 1.7 percent in each of the next two years. The Economic Forum predicted in December that the tax stream would produce $337.9 million in the next biennium.

The updated forecast raises that prediction by $4.8 million.

Nevada expects more cigarette sales at the borders because California just raised its cigarette tax by $2 a pack -- double the tax hike Nevada enacted in 2015. But state fiscal experts are still cautious, given the increased popularity of e-cigarettes, relaxed rules on marijuana and increased awareness of the health risks associated with smoking.

The Commerce Tax, created in 2015 and applied to businesses with gross Nevada revenue over $4 million a year, makes up 4.4 percent of projected general fund revenue. It’s expected to decrease by nearly 7 percent in the upcoming year and then increase by nearly 5 percent the following year.

The tax was initially projected to bring in slightly more than $371 million over the two-year budget cycle, but forum members raised their projections by $9.88 million to bring the forecasted amount to $381 million.

State economic analysts are still trying to grapple with the new tax, which is further complicated by the creation of a tax credit for businesses that allows them to count up to 50 percent of their commerce tax liability and apply it to their modified business tax bill. State fiscal analysts expressed some confusion as to why some businesses that qualified for the credit weren’t taking it, but noted that they’ve only been collecting the tax for the last two fiscal quarters and businesses may file amended or future tax forms to take advantage of the credit.

All other taxes, which include everything from fees on ride-hailing or taxi trips to liquor taxes, are projected to generate $1.19 billion over the two-year budget period. Forum members raised their December projections for the category by a total of $30.39 million.

Factored into the revenue predictions are the many tax credits that Nevada offers as an incentive for businesses to locate or expand in Nevada. Tax credits for film companies, expanding businesses, an educational choice scholarship program and companies that invest in college savings plans reduce the gross revenue available to lawmakers by about $140 million.

Legislators also made the new Commerce Tax more palatable in 2015 by allowing businesses who pay it to write off part of their modified business tax obligation. Those writeoffs are expected to reduce the gross revenue by $182 million in the upcoming biennium.

The Economic Forum’s Monday forecast doesn’t take into account the many bills up for consideration this session that raise fees and taxes or allow for more tax credits. One notable variable is Sandoval’s proposed tax on recreational marijuana, which is built into the governor’s proposed budget and is projected to raise close to $70 million over the two-year budget cycle.

As required by state law, the forum will meet again in December and throughout 2018 to update revenue projections and help prepare for future budgets.